Home U.S Is American Pie's opening not really about Buddy Holly after all?
U.S

For nearly 50 years it has been regarded as one of music’s best-loved classics, a poignant ode to a lost era of America after the untimely death of Buddy Holly.

But Don McLean has revealed his anthem to ‘the day the music died’, American Pie, may have also been about the untimely passing of his father who had Scottish roots.

The well-known song dating back to 1971, which is frequently crowned the best of all time in polls, has lyrics that have been endlessly debated over by music fans.

Until now it had been thought that it told the story of the 1959 plane crash that killed Holly, Ritchie Valens and JP ‘The Big Bopper’ Richardson, plus pilot Roger Peterson.

But in an interview today about his career, when asked about whether the first verse could be about the death of his father, McLean said: ‘You’ve hit the nail on the head.’ 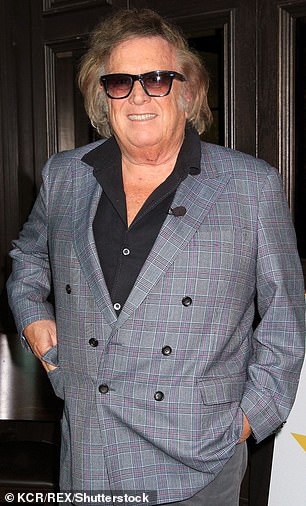 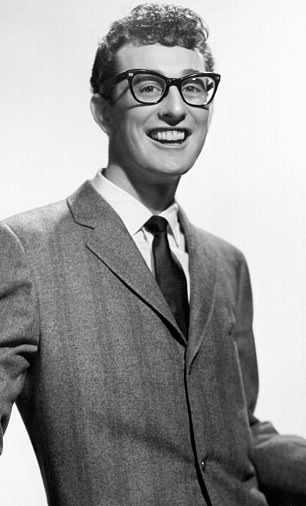 Don McLean (left, pictured in Las Vegas in November last year) had been thought to have written his 1971 hit American Pie about Buddy Holly (right, pictured in New York City in 1958) 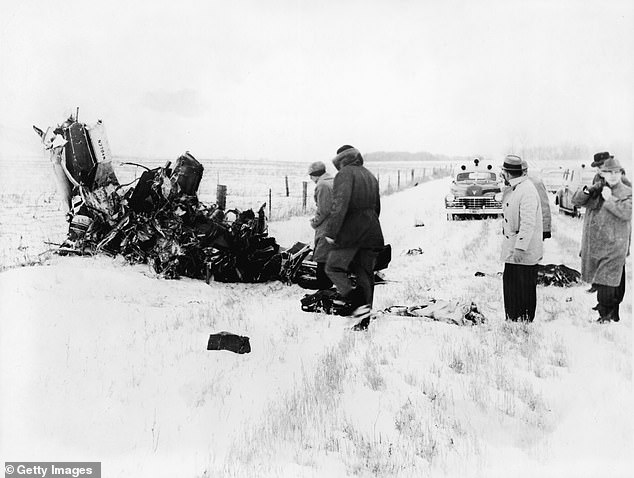 The plane crash near Clear Lake in Iowa in February 1959 claimed the lives of Buddy Holly, Ritchie Valens, and JP ‘The Big Bopper’ Richardson, plus pilot Roger Peterson

Speaking to the Guardian, he added: ‘I mean, that’s exactly right. That’s why I don’t like talking about the lyrics because I wanted to capture and say something that was almost unspeakable. It’s indescribable. American Pie is a biographical song.’

McLean, who is now aged 75 and lives in Palm Desert, California, had a vision aged 15 that his father Donald Snr was going to die, and told his grandmother about it.

What do the American Pie lyrics really mean?

‘Drove my Chevy to the levee’

Cheap Chevrolet pick-up trucks were a favourite among young men. A ‘levee’ could mean a ‘party’, and obviously one where there was no alcohol would be ‘dry’.

‘Bad news on the doorstep, I couldn’t take one more step’

The deaths in a plane crash in Iowa in 1959 of musicians Buddy Holly, The Big Bopper and Ritchie Valens were rock music’s first big tragedy. The line ‘I can’t remember if I cried when I read about his widowed bride’ refers to the fact that 22-year-old Holly had only recently married.

‘But February made me shiver’

The month that Buddy Holly died. His plane was found a day after crashing in a snow-covered field.

Widely believe to be referring to how Bob Dylan, in the leather jacket he wore on the cover of his Freewhilin’ album, had replaced Elvis Presley in America’s affections.

‘Now the half-time air was sweet perfume, While sergeants played a marching tune. We all got up to dance, Oh, but we never got the chance’

Most likely refers to the day in May 1970 when students at Kent State University, Ohio, were enjoying a day out and smoking pot near a demonstration against President Nixon who had just announced an extension of the Vietnam war to Cambodia. The day ended with the Ohio National Guard shooting dead four students and injuring nine.

After ordering the horrific murders of the actress Sharon Tate (who was eight months pregnant with film director Roman Polanski’s child) and friends, killer Charles Manson claimed he had received instructions to carry out the execution in Los Angeles in August 1969 from the innocuous Beatles song Helter Skelter.

By Ray Connolly for the Daily Mail

He claimed she said ‘don’t be ridiculous’ to him and asked ‘why would you say such a thing’, but McLean replied: ‘Because it’s going to happen.’

Just a few days later his father collapsed and died in front of him in January 1961.

McLean said: ‘I saw how he looked. He’d turned green. I didn’t know what I was going to do without him.’

McLean, who grew up in New Rochelle, a commuter city near New York, said he ‘cried for two years’ after his father died and blamed himself.

Speaking to the Scottish Herald in May 2018, McLean said his father, whose ‘roots were in Scotland’, was ‘a hard-working, down to earth man with a good sense of business’.

He added: ‘We weren’t rich but he knew the value of a good location and bought a small house in a wealthy neighbourhood. Yet he didn’t share my passion for music.

‘To him, it was just a distraction. He certainly didn’t see music as a good career move. He wanted me to work in an office. Of course, I had other ideas.’

McLean’s mother Elizabeth Bucci was born in New York to Italian parents, while his father’s family had lived in New York state for generations but had Scottish ancestry.

According to Ancestry records, McLean traces his Scottish roots back to his great-great-great-grandfather John McLean who was born on the island of Jura on July 3, 1755 – and is believed to have moved to the US aged 20 in 1775.

McLean’s hit song American Pie is generally viewed to be about the downfall of the US in the 1960s following the assassination of President John F Kennedy in Texas in November 1963.

Fans have also debated over references within the song they believe could be to the likes of Bob Dylan, Elvis Presley, Martin Luther King, Mick Jagger or the Beatles.

As for the Holly reference, McLean wrote in an open letter to fans in 1993: ‘As you can imagine, over the years I’ve been asked many times to discuss and explain my song ‘American Pie.

‘I have never discussed the lyrics, but have admitted to the Holly reference in the opening stanzas.

‘I dedicated the album American Pie to Buddy Holly as well in order to connect the entire statement to Holly in hopes of bringing about an interest in him, which subsequently did occur.

‘You will find many ‘interpretations’ of my lyrics but none of them by me. Isn’t this fun?

‘Sorry to leave you all on your own like this but long ago I realised that songwriters should make their statements and move on, maintaining a dignified silence.’ 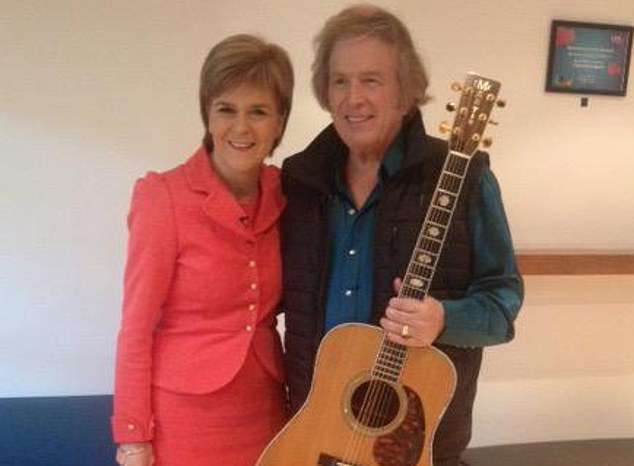 Don McLean, whose father was Scottish, is pictured with First Minister Nicola Sturgeon backstage at ITV’s Loose Women in May 2015 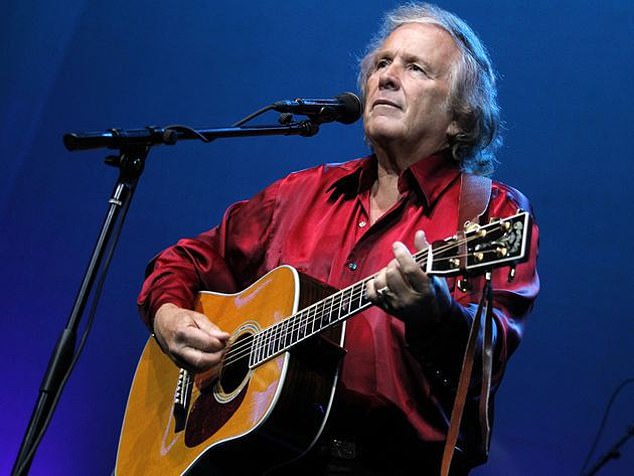 Who was Don McClean’s father?

He married Elizabeth Bucci, who lived in New York but was from an Italian family, on March 31, 1929 in Port Chester, New York.

They had two children – Don McClean and Betty Anne, who died in Maine aged 84 in November 2014.

He worked as a district manager for energy company Consolidated Edison and sold gas heating to people.

Speaking in an undated radio interview, he also once said: ‘The fact that Buddy Holly seems to be the primary thing that people talk about when they talk about ‘American Pie’ is, is kind of sad.

‘It’s only the beginning is about Buddy Holly, and the rest of it goes on and talks about America and politics and the country, and trying to catch some kind of a special feeling that I had about my country, especially in 1970 and ’71, when it was very turbulent.’

In April, McLean spoke out about how most modern hits make him ‘want to hang himself’, complaining of a ‘nihilistic’ society in which nothing is respected.

McLean, who is said to have made £120million across his 50-year career, told the Greatest Music of All Time podcast of songwriting: ‘Now… the music doesn’t mean anything.

‘[Music] does not exist – there’s some form of music-like sound but it’s not music. It’s a single note or three or four notes repeated over again with a chorus that’s drummed into your head or it makes you want to hang yourself.’

McLean added that he did not intend to retire, vowing instead to ‘die on stage’.

How does Don McLean trace his roots back to Scotland?

Donald McLean I (Don McLean’s grandfather): Donald M McLean I was born in November 1879 in Brooklyn, New York, to Malcolm McLean and Mary Jewett. He married Olive Carnright and died on January 22, 1938.

John McLean (Don McLean’s great-great-great-grandfather): General John McLean was born on July 3, 1755 in Jura, Argyll, the son of Donald McLean and Margret Mckellar. He is believed to have moved to the US in 1775. He married Ann Burnett and died on February 28, 1821 in Newburgh, New York.

Is this the future of classrooms? Face masks that supply students...
Read more
U.S

LeAnn Rimes is opening up about her battle with mental health. In a new interview with Fox News the 38-year-old country singer said that...
Read more
U.S

A father and two of his children were killed by a suspected drunk driver in California last Friday after leaving a family member’s...
Read more

However, Sikora’s direct connection to the cast of Book II may have sealed his guest appearance in one of the five upcoming episodes...
Read more

LeAnn Rimes is opening up about her battle with mental health. In a new interview with Fox News the 38-year-old country singer said that...
Read more
Load more