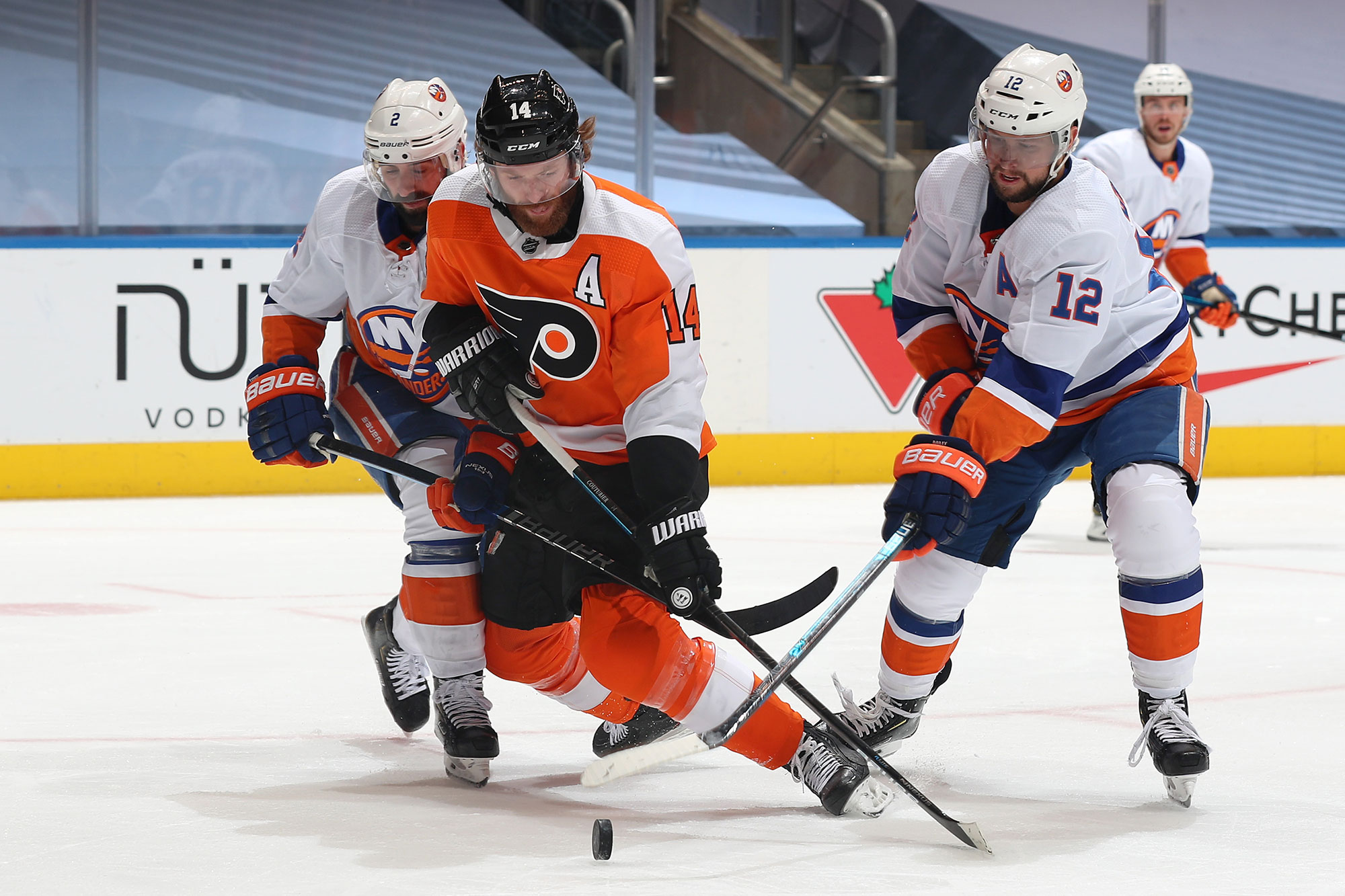 This game looked to be over in the first period, but the Flyers learned to never count the Islanders out.

Storming back with three unanswered goals, the Islanders climbed out of a three-goal hole in the first period and rallied to force overtime. But Philippe Myers won it for the Flyers just 2:41 into OT to take a 4-3 win and even the Eastern Conference semifinals series 1-1 at Scotiabank Arena on Wednesday afternoon in Toronto.

After allowing just three first-period tallies in their first 10 games this postseason, the Islanders gave up three goals in roughly 15 minutes in just their third loss since arriving in the Toronto bubble.

But the Islanders showed some life after captain Anders Lee got the offense going halfway through the second period with a deflection on a feed from Mathew Barzal seconds into the Isles’ first power play of the day. Anthony Beauvillier then broke through on an odd-man rush at 11:42 of the third, wristing the puck right under Flyers goaltender Carter Hart’s arm to bring the Islanders within one.

With the game winding down, it was J-G Pageau who slammed home the game-tying tally, capitalizing on a Flyers’ turnover and sniping one right over Hart’s shoulder at 17:51.

Fresh off of back-to-back shutouts, Islanders goaltender Semyon Varlamov stood tall for the 40 seconds he needed to surpass Billy Smith’s franchise record playoff shutout streak (136:59). But he was quickly lit up twice by Kevin Hayes and again by Sean Couturier, with at least two of those goals considered to be weak.

Varlamov, who finished with seven saves on 10 shots, was pulled for the first time this postseason and replaced with Thomas Greiss. Greiss made his first appearance in net since the Islanders’ exhibition game against the Rangers on July 29.

Flyers goaltender Carter Hart turned aside the Islanders’ most dangerous opportunities of the first period to keep his team ahead, robbing Beauvillier at the side of the net and flashing the pads on a Lee one-timer.

After Ryan Pulock mishandled the puck, Hayes came barreling in and squeezed one in under Varlamov’s arm at 9:43 of the first for the 2-0 score. Flyers center Sean Couturier then danced around Nick Leddy to finesse one past Varlamov on the short side, giving Philadelphia a commanding 3-0 lead at 15:09.

There wasn’t an immediate sense of urgency from the Islanders to open the middle period, but Ross Johnston attempted to light a fire under his team by getting into it with Myers after the whistle, earning him a roughing penalty.

Shortly after the Flyers’ second power play of the day expired, Michael Raffl broke out on a partial breakaway and got a shot off from the slot that Greiss saved at 6:31. Jakub Voracek was called for delay of game at 11:28 to put the Islanders on their first power play.

Seconds into the man-advantage, Lee put away a slick feed from Barzal on the right side of the net to cut the Flyers’ lead to 3-1. Attempting to ride the momentum, Josh Bailey forced a giveaway in the Flyers’ zone and fired a shot from the slot that was blocked by Justin Braun.

Just over halfway through the third, Beauvillier wristed one under Hart’s arm on an odd-man rush to bring the Islanders within one. Lee nearly notched his second of the day twice after Beauvillier’s tally, once on a wraparound that Hart stopped and another on a long shot that rang off the post.

Pageau’s pressure in the Flyers’ zone landed the puck on his stick for the quick shot over Hart’s shoulder to knot the game at 3 with just over two minutes left in regulation.