Home Sport Jack Willis is key to Wasps bid for glory in the Premiership final against...
Sport

They might as well re-name him Jackal Willis now. Such is the Wasps flanker’s dominance at the breakdown this season —where he has taken a staggering 44 turnovers, 25 more than anyone else — Jack does not quite seem enough.

‘He’s like playing a computer game on cheat mode,’ said his head coach Lee Blackett, when summing up Willis’s work.

‘Hands-down he’s one of the best in the competition,’ added England and Wasps back-rower Brad Shields. 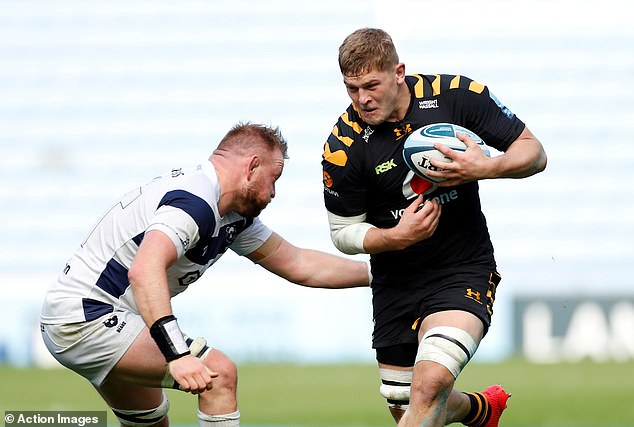 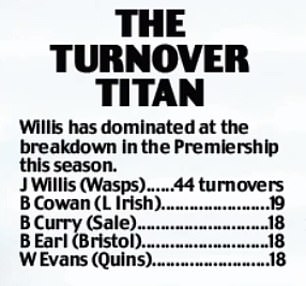 So good is he that Saturday’s Premiership final has been pitched as Exeter Chiefs versus Jack Willis.

Despite rupturing the anterior cruciate ligament in his knee in the 2018 Premiership semi-final — which saw him miss a first England tour — he has come back better and more flexible than ever. How does he do it?

‘It’s his agility in his groin area,’ explained Wayne Courtnage, Willis’s club coach at Reading Abbey RFC until Under 16 level.

‘He’s almost double-jointed up there! He splits so far and then hinges from it. He seems to have such a low centre of gravity and has quite long arms, which helps.’ 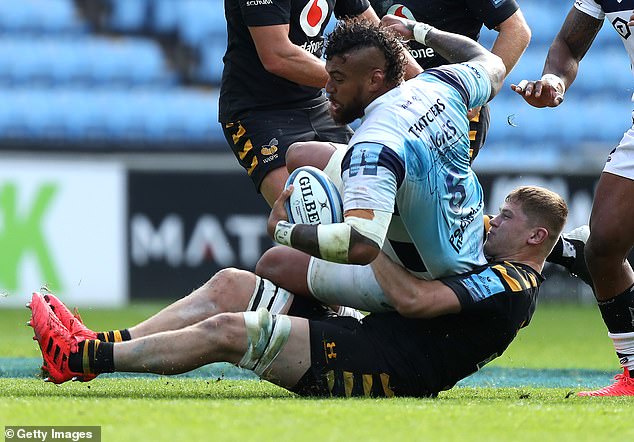 Danny Batty, Henley College’s rugby master when Willis was there, added: ‘Jack is 6ft 3in but has that wide base to get himself over the ball.

‘His strength is phenomenal. There will be plenty of guys with a better vertical jump, or leg press, but he applies his strength so well. So once he’s over the ball, he’s pretty much unmoveable.

‘I’ve worked with better athletes but he reads the game so well. Apart from having a good rugby brain he is just so determined.’

The 23-year-old is committed to whatever he turns his hand to — he once joined his girlfriend for ballet lessons to improve his balance. He even donned a leotard, according to Courtnage. Days after that ACL injury he turned up to Wasps’ Mad Monday social in a wheelchair, keen to stay involved. While out injured, he qualified as a plumber with his younger brother.

‘That was a good distraction away from rugby,’ said Tom, 21, who also plays in Wasps’ back row. ‘We had Monday evening theory and Tuesday practicals, which was either putting together a radiator or a sink. 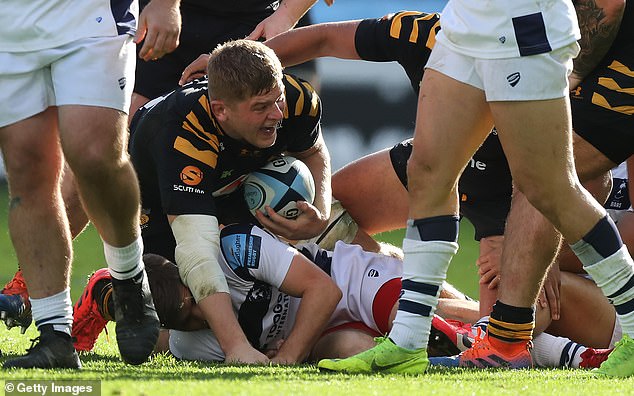 The Wasps flanker has taken a staggering 44 turnovers, 25 more than anyone else this season

‘They graded you on whether it was up to scratch. Jack is better for having some experience in the real world. I’ll give him that.’

Jack’s eagerness to achieve is a long-term trait. Born to Joanne and Steve — an Abbey player himself into his 40s who also played a handful of times for London Irish — Jack is the eldest of three children from Emmer Green, a suburb of Reading. After Tom is 17-year-old Annabel.

The family have fostered more than 30 kids over the years. When Jack was not scrapping with his brother while watching his Dad play, he used to entertain them on the sidelines at football and rugby games.

‘Jack’s football skills weren’t the best, I can confess,’ said Courtnage. ‘He had a best friend called Lewis Hayden who was on Southampton’s books from a really early age.

‘We all thought Lewis would become a professional, but he was let go when he was 17. And Jack’s career took off.’ 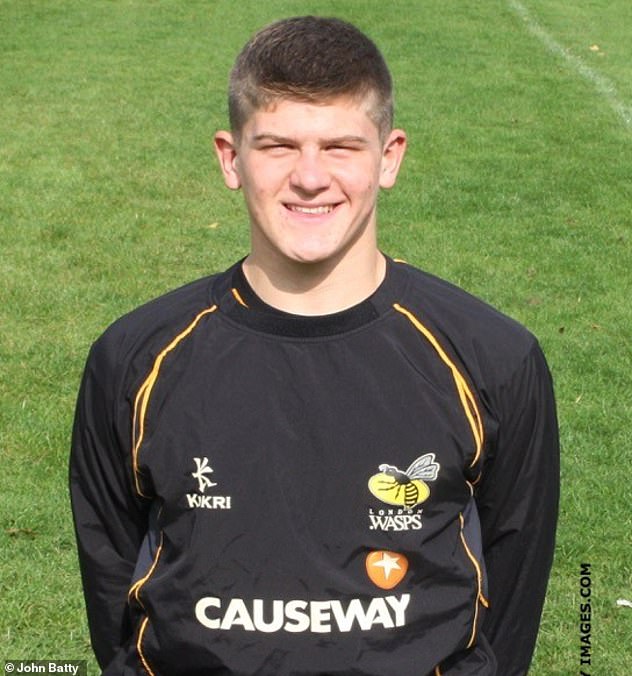 In his early teens, though, Willis’s Abbey side almost disbanded due to a lack of players.

‘I’ll move clubs or give up rugby,’ said Willis at the time — but enough were found to get a team out and by 15 he had represented Berkshire. Before a growth-spurt, London Irish rejected him at a trial.

‘It really knocked the wind out of his sails,’ said Courtnage. ‘It took him four months to get over. They must look at him now and think “We’ve missed something there”.’

Clearly the star of his club — and fiercely competitive — Willis once demanded that a game continued to its conclusion when his coaches tried to stop it early because Abbey were being thrashed. He was hardly fazed by adversity.

‘In one game we played Luton and this guy bit Jack’s ear off, almost,’ recalled Courtnage. ‘Jack had ripped the ball off this guy and he decided to bite Jack’s ear lobe. 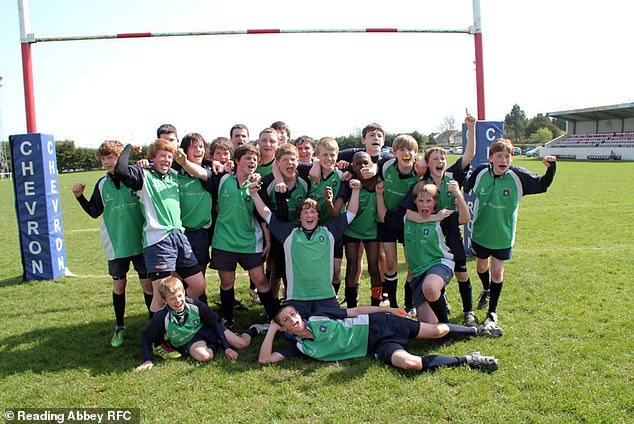 ‘It was hanging off! Jack’s dad Steve came running on and was quite upset, as you’d expect. Jack just went off to have it stitched. The next week he came back and refereed a game. The guy got banned for a year.’

So keen was Willis to further his career that he wrote to Henley College, asking for Batty to watch him play.

Henley developed players for Wasps and Willis wanted in. At an Under 16s match at Maidenhead, Batty found a new star. ‘He was chipping and chasing, tapping and going and wanted to be on the ball the whole time,’ said Batty. ‘We invited him for a trial in February half term and he got about eight turnovers. His breakdown work was incredible. I had to look back at each clip to see how the hell he was jackalling all those balls.’

Whether it is working on his property and finance company — RockCap, set up with former team-mate Alex Lundberg — or dedicating himself to his rugby career, Willis is zoned in. 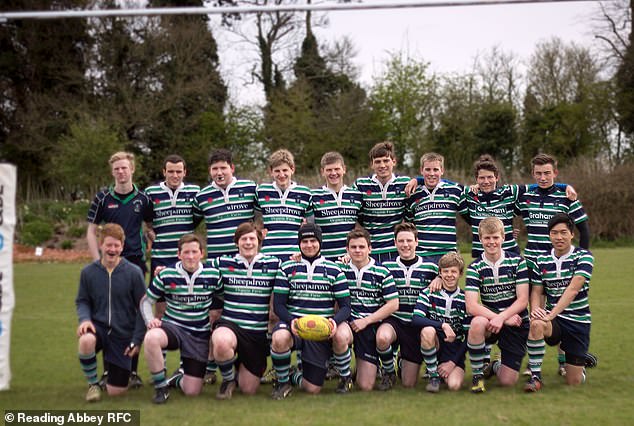 On his teenage birthdays and Christmas Eve, he refused to drink but would pull up a stool at the pub with his childhood sweetheart Megan, who he lives with now having met at 14.

The discipline paid off. At 19 he made his Wasps debut and four years later he is the club’s dominant player.

Courtnage spotted him running around Reading golf course during lockdown. ‘I was out walking the dog — he runs like a washing machine, does Jack, arms and legs everywhere,’ says his old coach.

Jack Willis pictured (sixth from the left, back row) in the Henley College team aged 16 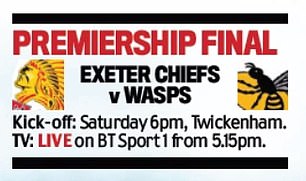 ‘He was out with his girlfriend’s dad, who’s in his 50s, hill sprinting!’

That desire makes his team-mates believe he is now ready to star for England, too.

‘I don’t doubt for a second that he has the ability to step up,’ said Shields. ‘His performances inspire us.’

If Willis keeps going like this, Saturday’s final will not be the last time Twickenham gets to enjoy a day of the jackal.

'That's theatre, he is in a SWIMMING POOL': Borussia Dortmund boss...
Read more