Japan has taken the lead in the supercomputer race, having built a machine that is 2.8 times faster than the previous title holder, according to its developers.

The Fugaku supercomputer was developed by Japanese research institute RIKEN and Fujitsu Ltd – its processor technology comes from UK-based ARM.

Chips designed by Intel and IBM have dominated the TOP500 list of most powerful supercomputers – this is the first time an ARM-based chip has hit the top spot.

At the heart of the Fujitsu machine is a 48-core system-on-a-chip – 158,976 of those chips work together to create this powerful machine that hits 415.5 petaflops.

The previous top-ranked system as of November 2019 was at Oak Ridge National Laboratory in the United States with chips designed by IBM hitting 148.6 petaflops.

ARM processors are used in the majority of smartphones around the world and Apple’s own design based on ARM will feature in new MacBooks and iMacs. 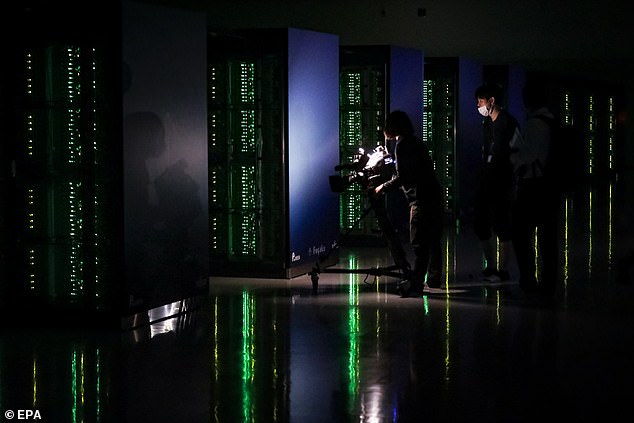 A television crew films Fugaku, Japan’s new supercomputer, is illuminated as it is unveiled to the media at Riken Center for Computational Science in Kobe, Japan 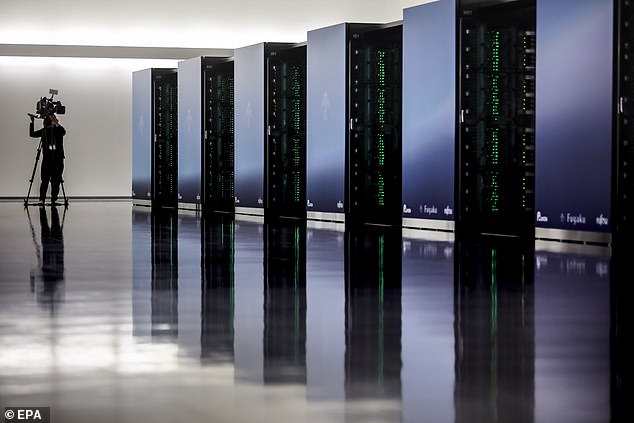 As a comparison to show the scale of these incredibly powerful machines, the new Playstation 5 operates at 10.28 teraflops – there are 1,000 teraflops in a petaflop.

They are also used for modelling climate systems – the UK Met Office has a Cray XC4 which is one of the most powerful of its type dedicated to climate modelling.

Supercomputers can also be used biotechnology research and medicine – the Fugauku machine has been working on the fight against COVID-19.

‘I very much hope that Fugaku will show itself to be highly effective in real-world applications,’ said Naoki Shinjo, corporate executive officer of Fujitsu.

Fujitsu licences the designs for the processor from ARM- which is based in the UK but owned by Japanese carrier Softbank.

It also became top in Graph 500, which ranks systems on data-intensive loads.

This is the first time in history that the same supercomputer has become number oneon Top500, HPCG, and Graph500 simultaneously.

The awards were announced on June 22 at the ISC High Performance 2020 Digital, an international high-performance computing conference.

On the Top500 ranking, the Japanese system achieved a score of 415.53 petaflops, much higher than the 148.6 petaflops achieved by US based Summit.

This marks the first time a Japanese system has taken the top ranking since June 2011, when the K computer—Fugaku’s predecessor—took first place.

Fugaku, which is currently installed at the RIKEN Center for Computational Science (R-CCS) in Kobe, Japan, is being developed under a national plan to design Japan’s next generation flagship supercomputer.

It will also carry out a wide range of applications that will address ‘high-priority social and scientific issues’, according to the team behind the machine. 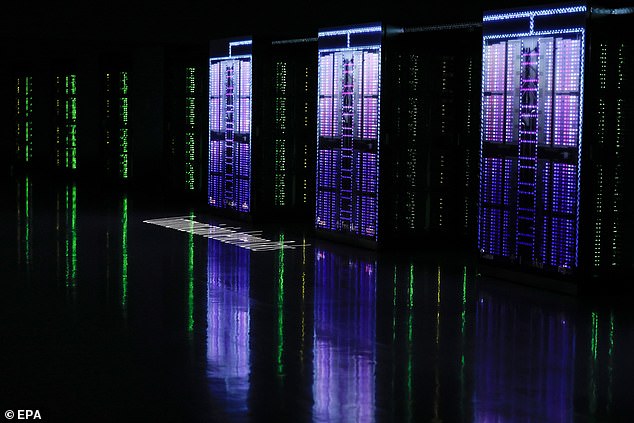 At the heart of the Fujitsu machine is a 48-core system-on-a-chip – 158,976 of those chips work together to create this powerful machine that hits 415.5 petaflops

It will be put to use in applications aimed at achieving the Society 5.0 plan – this will see it run applications designed to discover new drugs, natural disaster simulations, weather forecasting and energy creation, storage, and use.

It will also work on the development of clean energy, new material development, new design and production processes and for purely scientific purposes.

The scientific goals are lofty – they aim to use the machine to gain an understanding of the fundamental laws and evolution of the universe.

‘The supercomputer illustrates a dramatic shift in the type of compute that has been traditionally used in these powerful machines,’ said Rene Haas, President of ARM.

‘It is proof of the innovation that can happen with flexible computing solutions driven by a strong ecosystem,’ Haas said.

‘For ARM, this achievement showcases the power efficiency, performance and scalability of our compute platform, which spans from smartphones to the world’s fastest supercomputer.’

This is a notable achievement for Japan in a space dominated by the US and China – who hold 340 of the Top500 supercomputers between them.

It won’t hold the top spot for long though, AMD is working with Cray Computing to build a 1.5 exaflop (1,500 petaflop) supercomputer for the US Department of Energy.

HUMAN BRAIN WILL CONNECT TO COMPUTERS ‘WITHIN DECADES’

In a new paper published in the Frontiers in Neuroscience, researchers embarked on an international collaboration that predicts groundbreaking developments in the world of ‘Human Brain/Cloud Interface’s’ within the next several decades.

Using a combination of nanotechnology, artificial intelligence, and other more traditional computing, researchers say humans will be able to seamlessly connect their brains to a cloud of computer(s) to glean information from the internet in real-time.

According to Robert Freitas Jr., senior author of the research, a fleet of nanobots embedded in our brains would act as liaisons to humans’ minds and supercomputers, to enable ‘matrix style’ downloading of information.

‘These devices would navigate the human vasculature, cross the blood-brain barrier, and precisely autoposition themselves among, or even within brain cells,’ explains Freitas.

‘They would then wirelessly transmit encoded information to and from a cloud-based supercomputer network for real-time brain-state monitoring and data extraction.’

The interfaces wouldn’t just stop at linking humans and computers, say researchers. A network of brains could also help form what they call a ‘global superbrain’ that would allow for collective thought.