‘There are broken bones but they will mend’: Trainer Jamie Osborne reveals jockey daughter Saffie, 18, broke her left arm, fractured ribs and punctured a lung in horror fall

By Marcus Townend for the Daily Mail

Apprentice jockey Saffie Osborne underwent an operation on a fractured left arm on Tuesday as the extent of the injuries she sustained in an x-rated fall at Windsor on Monday emerged.

Osborne’s trainer father Jamie had tweeted on Monday evening that his 18-year-old daughter had avoided serious injury – an acknowledgement that the outcome could have been much worse after she was unseated by mount Zeyzoun when he clipped heels and then trampled like a rag doll by the pursuing runners.

But as well as her arm fracture Saffie, who remains in Wexham Park Hospital in Slough, fractured ribs and punctured a lung. 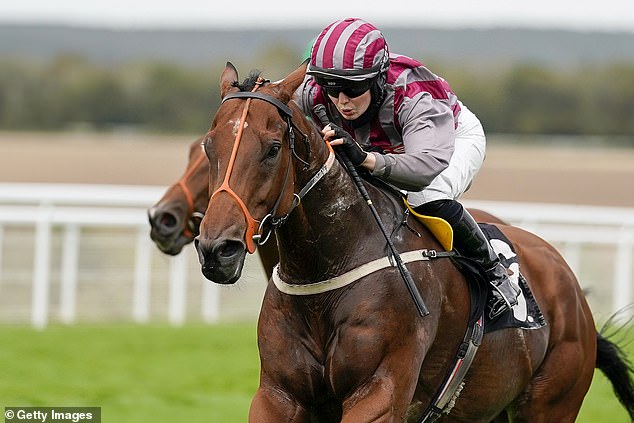 Jamie, a former top jump jockey, said: ‘I was with her until 1am last night but can’t go back because of covid-19 so she is on her own, poor kid.

‘When you watched the fall you would have settled for what has happened to her. You kind of have a sense of when it’s not good and watching that fall, it had the potential to be a not very good outcome.

‘There are broken bones but they will mend.’

Saffie, in her first season as a professional jockey, was supposed to go abroad riding this Winter but that trip will now have to be delayed.

He father added: ‘This year was all about her gaining as much experience as possible so she’s experienced a little bit of everything now!’

Meanwhile, trainer Gordon Elliott has now decided to let dual Grand National winner Tiger Roll run on the Flat in a mile and three-quarter maiden at Navan tomorrow (Thursday). In a 37-race career, the 10-year-old’s only previous run on the Flat came in March 2016 when second at Dundalk.

As a reward for a successful 2020 season, trainer Johnny Murtagh has been added to the Aga Khan’s roster of trainers in Ireland for 2021. As a jockey, Murtagh’s successes for the Aga Khan included the 2000 Derby and Arc on Sinndar.

Houston-based Instagram influencer Alexis Sharkey has been found dead after going missing over the Thanksgiving holiday, according to her family. “It’s with deeply broken...
Read more

Kate Middleton, 38, has a stunning jewellery collection with pieces including earrings, necklaces and rings. She will also occasionally add a brooch to...
Read more