Former Vice President Joe Biden says he will set up a ‘national commission’ to study a national court system he calls ‘out of whack’ – and is not ruling out expanding the size of the Supreme Court.

His comments, made in a ’60 Minutes’ interview yet to air in full on CBS, follow weeks worth of questions about whether he might back a scheme to expand the Supreme Court from its current 9 justices should Democrats seize control of the Senate – a prospect that has grown more likely with race-by-race polls.

A week ago, Biden said he was ‘not a fan’ of the idea of ‘packing’ the court, as a way to dilute its expected 6-3 conservative majority. 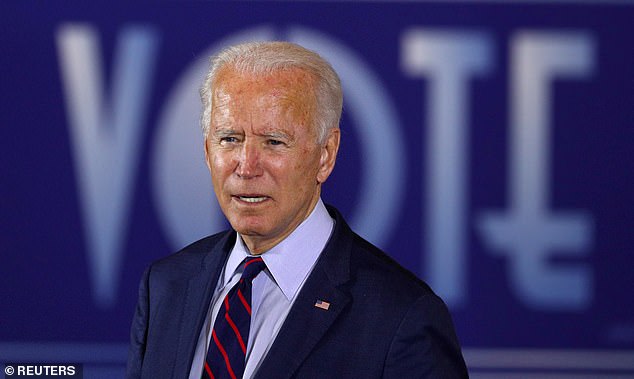 Former Vice President Joe Biden says if elected he will put together a national commission on the courts, and says its alternatives will go ‘go well beyond packing’

‘If elected, what I will do is I’ll put together a national commission of bipartisan commission of scholars, constitutional scholars, Democrats, Republicans, liberal/conservative,’ he told the program.

‘And I will — ask them to over 180 days come back to me with recommendations as to how to reform the court system because it’s getting out of whack- the way in which it’s being handled and it’s not about court packing. There’s a number of other things that our constitutional scholars have debated and I’ve looked to see what recommendations that commission might make,’ he said.

Pressed by interviewer Norah O’Donnell about whether he would ‘study’ the issue of whether to pack the court, Biden went further.

‘No, whether – there’s a number of alternatives that are – go well beyond packing,’ he said.

Asked if the issue was a ‘live ball,’ he agreed.

‘Oh, it is a live ball. No, it is a live ball. We’re going to have to do that. And you’re going to find there’s a lot of conservative constitutional scholars who are saying it as well. The last thing we need to do is turn the Supreme Court into just a political football, whoever has the most votes gets whatever they want. Presidents come and go. Supreme Court justices stay for generations,’ he said.

A number of court scholars and liberal advocates have put out ideas to change the court, where liberals fear conservatives may have locked in a majority that could wipe out Biden’s agenda despite a closely-split country.

The death of liberal Justice Ruth Bader Ginsburg on Sept. 18 prompted President Trump and Republicans to rush to confirm a conservative before Election Day. The Judiciary Committee voted out Judge Amy Coney Barrett Thursday on a 12-0 vote, with Democrats boycotting over the situation.

One idea, which would almost certainly require ending the filibuster for legislation, Democrats could push through a bill to increase the size of the court, perhaps to 11 justices, which likely create a 6-5 majority, restoring the even split before Ginsburg’s death.

There are other ideas to expand the court even further. Democratic Rep. Ro Khanna has introduced a bill to create 18-year term limits for Supreme Court justices. They would continue their lifetime appointments on lower courts after this period, and current justices would be exempt.

Biden’s comment to CBS notably did not limit itself to the Supreme Court. There are pronounced ideological differences between different appeals courts, and President Trump has had success in installing a large number of conservative judges on these powerful courts. Trump’s tenure also featured acrimonious debate in the Senate over the nomination of Brett Kavanaugh.

Creating a commission could be a way to put the issue aside at the start of his tenure should he win – during which time the appetite for activists to change the court could subside. Alternatively, Biden’s comments could allow him to point back to his own prior criticism of the existing Supreme Court as a justification to act should it repeatedly rule against his agenda, or strike down the Affordable Care Act.

The entire U.S. is on high alert over coronavirus, with the White House coronavirus task force issuing one of its strongest warnings yet,...
Read more
U.S

The U.S. government has ruled that emotional support animals will no longer be considered service animals on flights in a decision that could...
Read more

A French restaurant owner and his colleague were murdered while delivering expensive fine wine in Mexico City, police said — in a killing...
Read more

The entire U.S. is on high alert over coronavirus, with the White House coronavirus task force issuing one of its strongest warnings yet,...
Read more
Load more