Jurgen Klopp insists he has spoken several times to Mohamed Salah after the striker tested positive for coronavirus following a large-scale wedding ceremony in Egypt and does not have a problem with his star man.

During the international break Salah attended his brother’s wedding and was seen on camera dancing and socialising with numerous guests.

As a result the Liverpool star later returned a positive coronavirus test, and has headed back to Merseyside via private jet for a period of recovery. 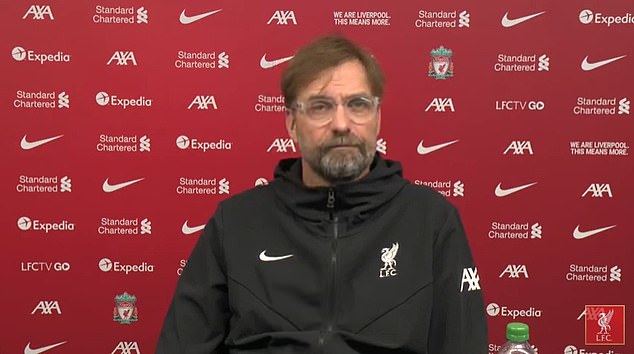 Salah is now set to miss Liverpool’s crunch top-of-the-table clash with Leicester City on Sunday as a result, though Klopp has refused to publicly criticise the Egyptian.

Speaking to reporters during his pre-match press conference on Friday, Klopp said: ‘He is probably back today. In close contact and how it always is.

‘He’s in a good place, feels well. No symptoms. Nothing to say in public about [the wedding].

The Liverpool boss the brought up a personal example from earlier in the year where he chose to miss a friend’s birthday, though admits that the wedding of a close relative like a brother is a ‘special moment.’

Klopp added: ‘I was in the summer in Germany, a friend of mine moved his party only because of me, 50 people attended and [then] I decided the last minute not to go.

‘That was allowed in Germany at that time, so only one situation [but] in other countries there’s more social pressure on you and a brothers wedding is a very special moment.

‘I have to say all my players are incredibly disciplined. They really know about the situation, but sometimes it doesn’t always work like that. All the rest is between Mo and me.’

Liverpool must now face Brendan Rodgers’ high-flying side with a multitude of absences throughout their ranks.

A mounting injury crisis means Liverpool are without three of their first choice defenders, while captain Jordan Henderson has also been ruled out after picking up a groin problem with England.

Klopp has confirmed both Henderson and Trent Alexander-Arnold will not feature in Sunday’s game, joining Virgil van Dijk and Joe Gomez as absentees.

When asked about the potential return of summer signing Thiago Alcantara and midfield general Fabinho, Klopp replied: ‘[They are] Both in a good way, Ox [Oxlade-Chamberlain] in a good way. Closer but we will see if close enough for the weekend.’