Katy Perry and her fiancé Orlando Bloom have snapped up an exquisite compound in the wealthy enclave of Montecito, California for $14.2 million.

The couple, who welcomed daughter Daisy Dove in August, purchased the stunning ocean view home from former Duracell and Chrysler CEO C. Robert Kidder, who owned the estate for over 20 years, according to Variety.

The couple’s gated property consists of multiple structures sitting upon 8.9 acres of land and will be situated among Hollywood’s elite and even royalty with Prince Harry, Meghan Markle and baby Archie, 17 months, as their neighbours. 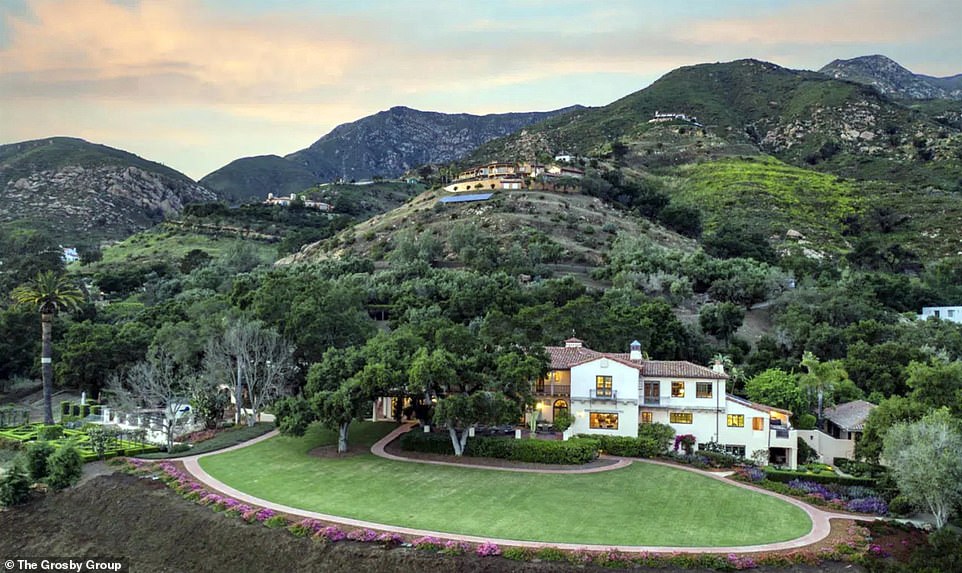 Home sweet home: Katy Perry and Orlando Bloom have snapped up a gorgeous Mediterranean villa in the wealthy enclave of Montecito, California for $14.2 million 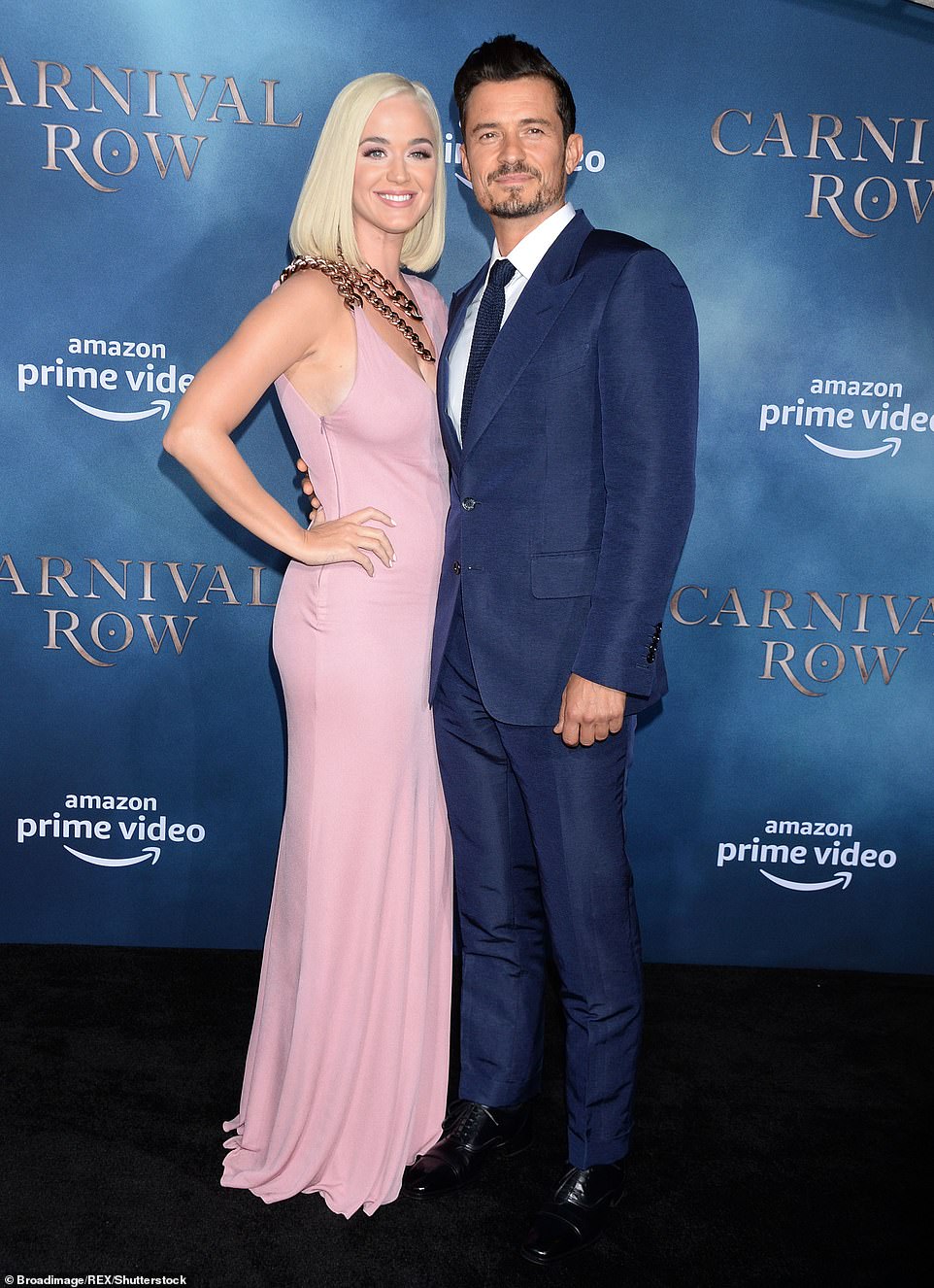 Another new addition! The couple, pictured in 2019, have recently welcomed daughter Daisy Dove

The former royals bought a $14.7 million mansion in the secluded and leafy, gated estate outside Montecito, Southern California in June and joined an affluent town where homeowners include Ariana Grande, Ellen DeGeneres and Oprah Winfrey.

Orlando and Katy will join the exclusive neighbourhood, with their own sprawling property having its own gated compound, where visitors can access the gorgeous home through a long, oak tree-lined driveway that lands at the main house.

Katy and Orlando may have dropped a pretty penny for the property, but the complex has undergone a significant price drop since it was first listed in the spring of 2019 for $20 million in spring 2019. Stunning: The home offers breathtaking views of the Pacific Ocean 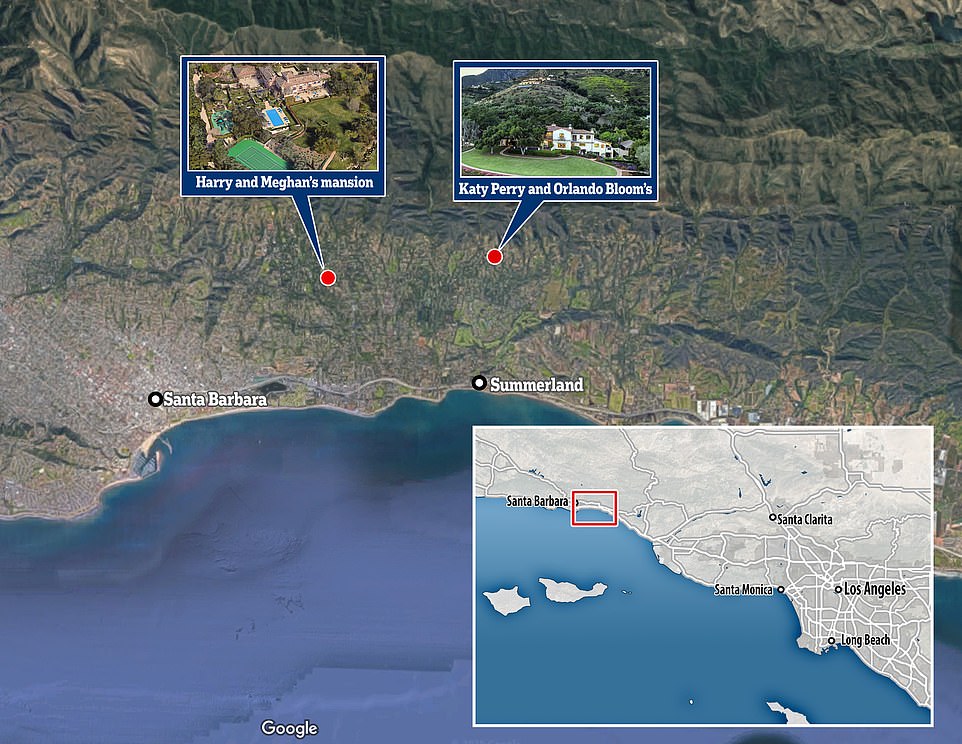 Exciting: The couple’s gated property consists of multiple structures sitting upon 8.9 acres of land and will be situated among Hollywood’s elite and even royalty with Prince Harry, Meghan Markle and baby Archie, 17 months, as neighbours 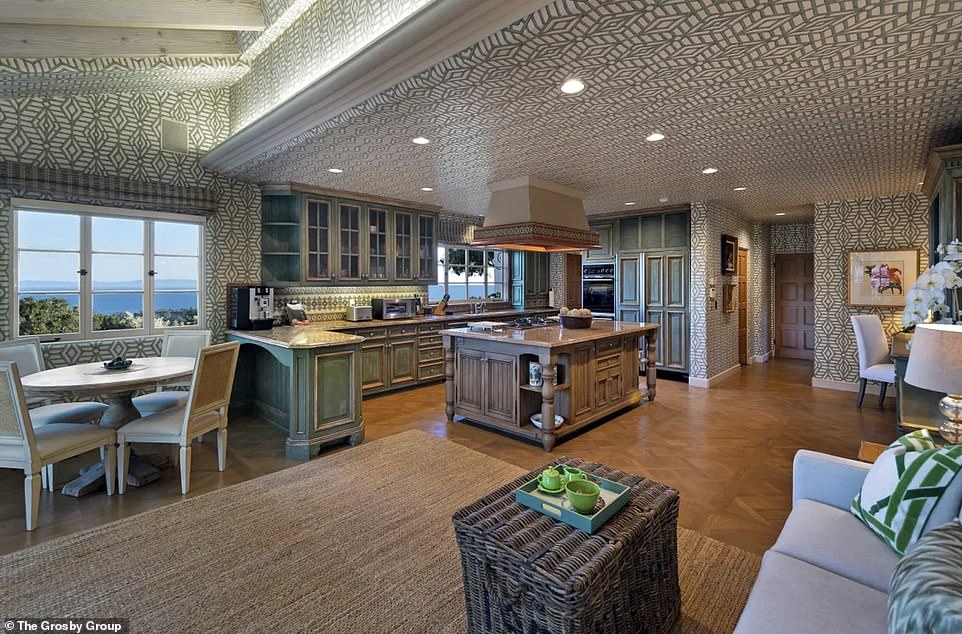 What’s cooking? Even the kitchen and dining area offer sublime views of the ocean

After months on the market it was reduced to $16million, before the A-list couple snapped it up nearly $2million under asking price.

Inside, the home boasts multiple bedrooms and sitting rooms with sublime views of the ocean blue.

The office space embraces a vintage aesthetic with dark, wooden accents throughout the room. 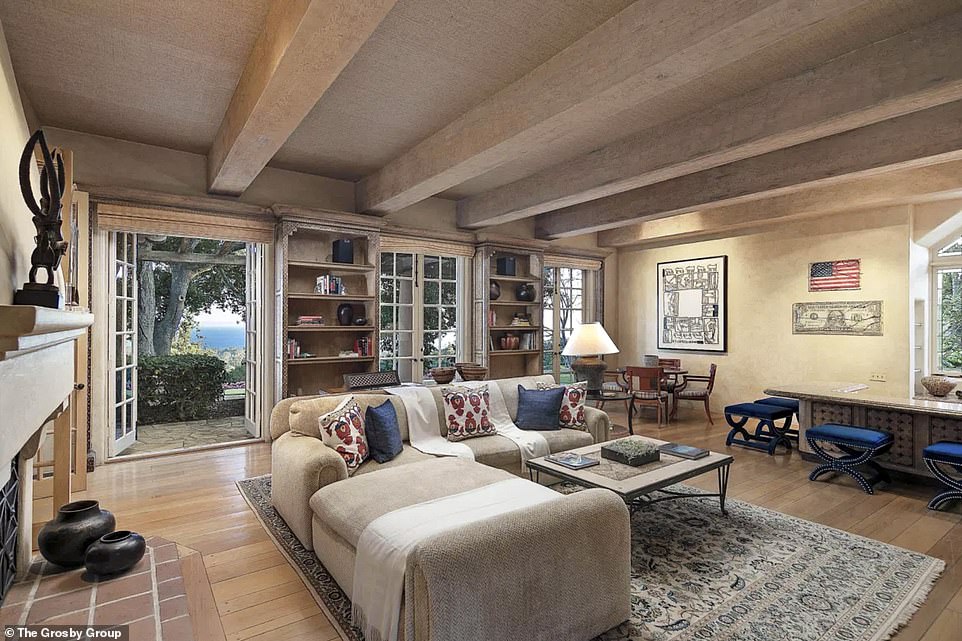 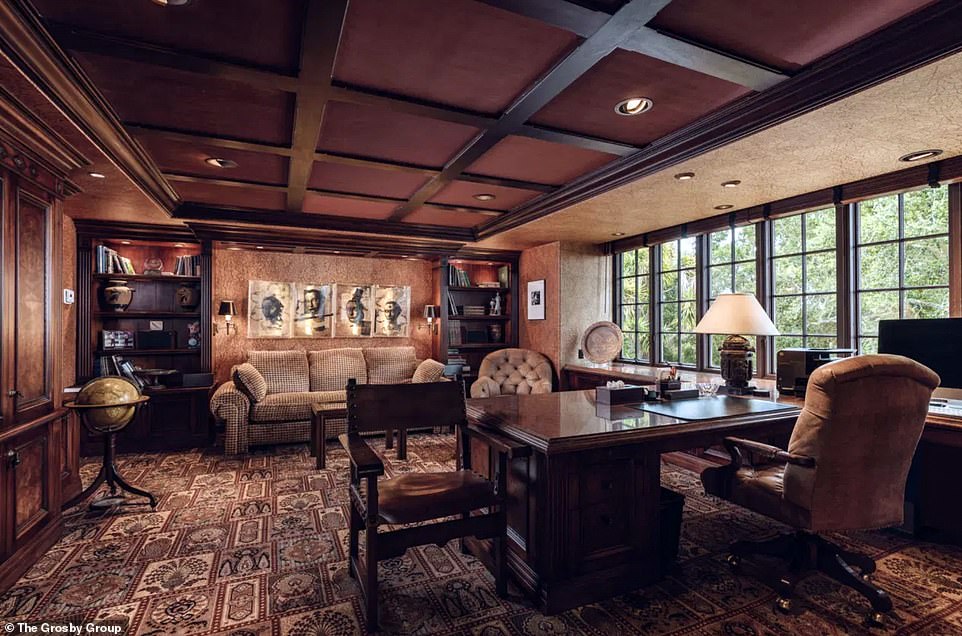 Even the kitchen contains unparalleled views of the Pacific.

The growing family will be able to cook and consume dinner beside sweeping views of the sea.

Outside, the grounds are shaded by sweeping oak trees and adorned with well-manicured hedges. 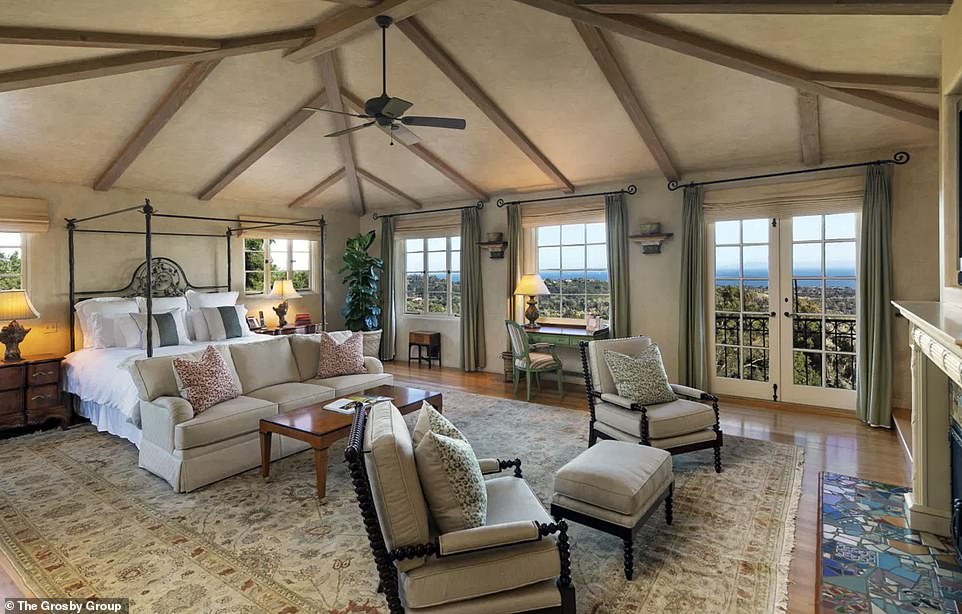 Sweet dreams: One of the many bedrooms on the property 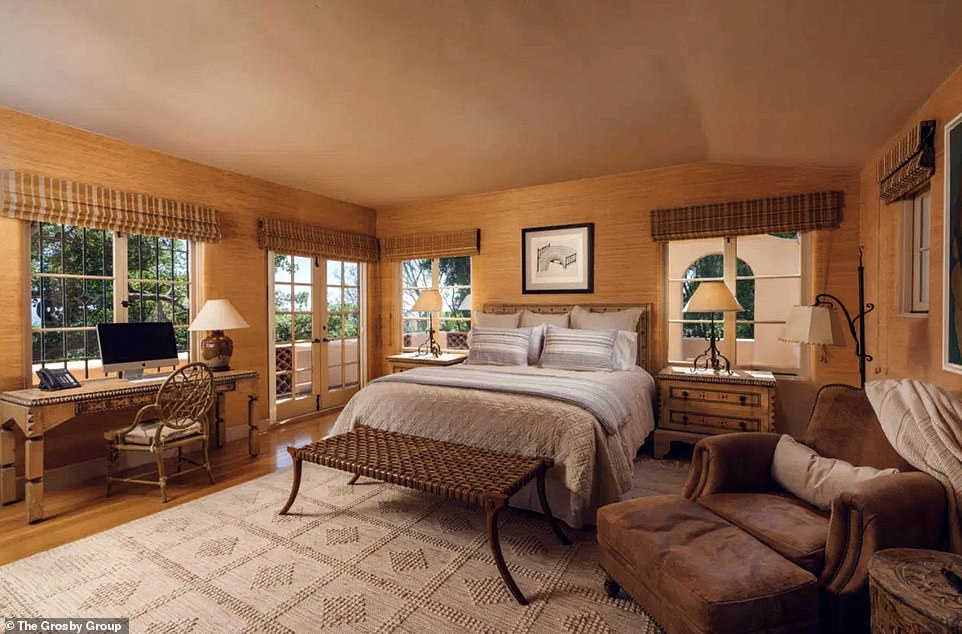 Zzzz: This bedroom slightly diverges from the design of the other rooms with a warmer wall color 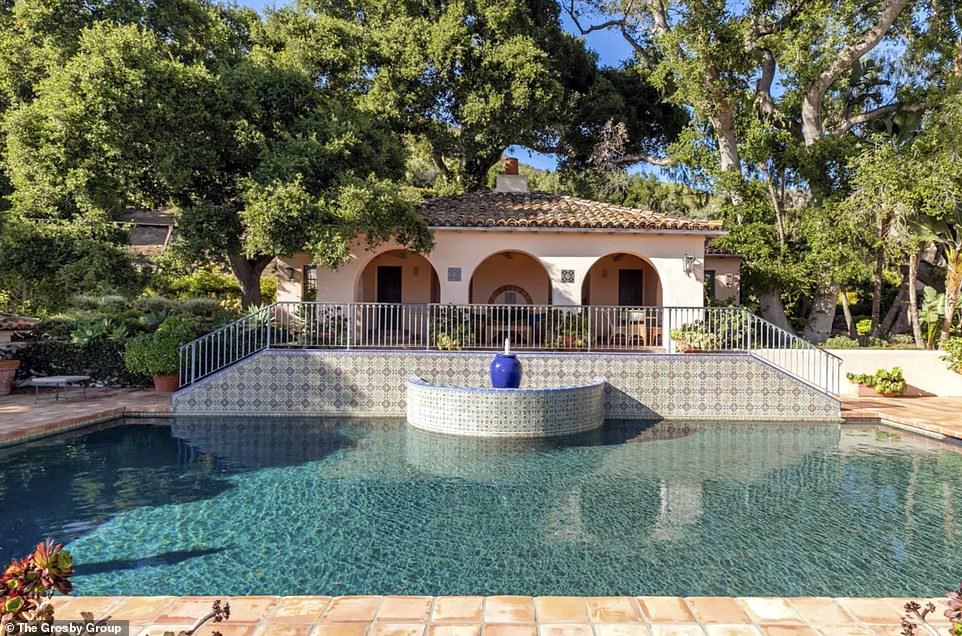 Making a splash! The property’s pool is accented by beautiful tilework and a peaceful fountain

Even the poolhouse has two bedrooms and two full baths.

Born in Santa Barbara, it’s no wonder Katy was keen on snapping up this breathtaking property by her hometown.

On top of this new estate, the couple are also attempting to sell two other homes.

Katy has put her Beverly Hills guesthouse on the market for $8 million, while Orlando has an $8.999 million bachelor pad in the same community that has been on-off the market for the last two years, according to Variety. 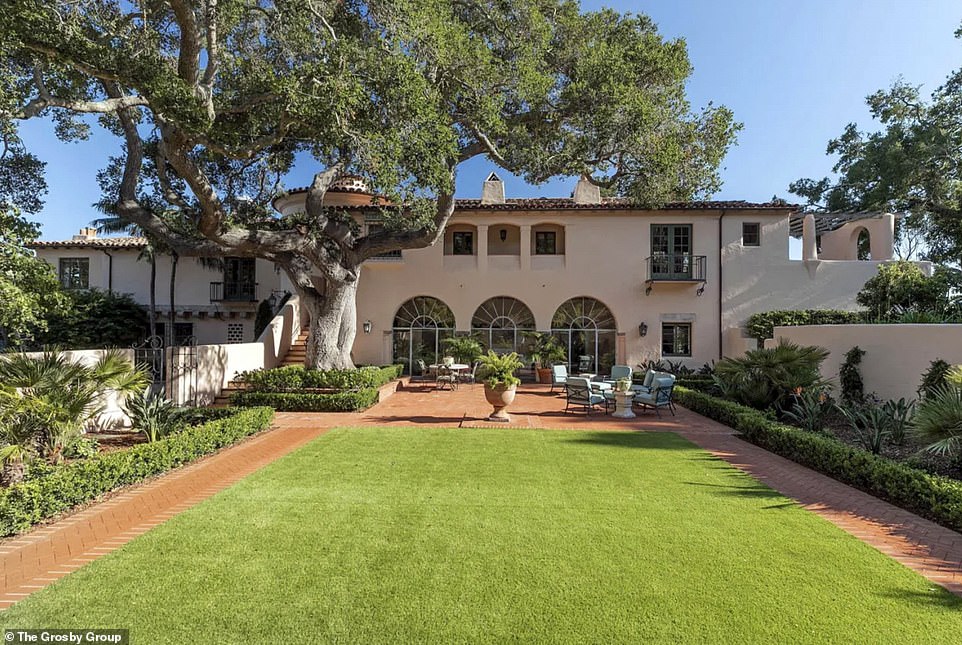 Luxury: Outside, a well-manicured lawn surrounded by a tile path await the new owners 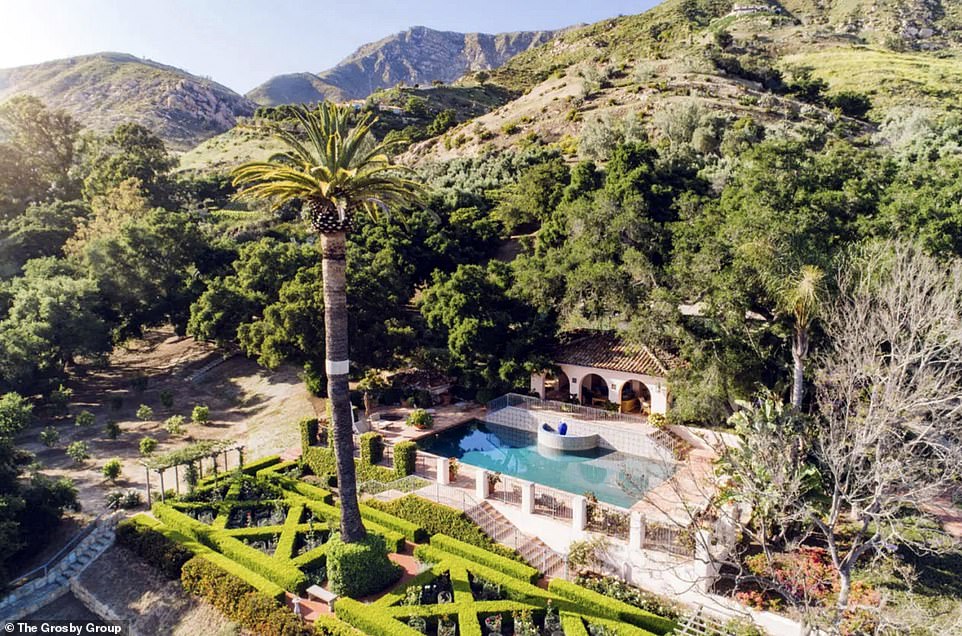 Stunning: A perfectly manicured hedge sits beside the gorgeous pool 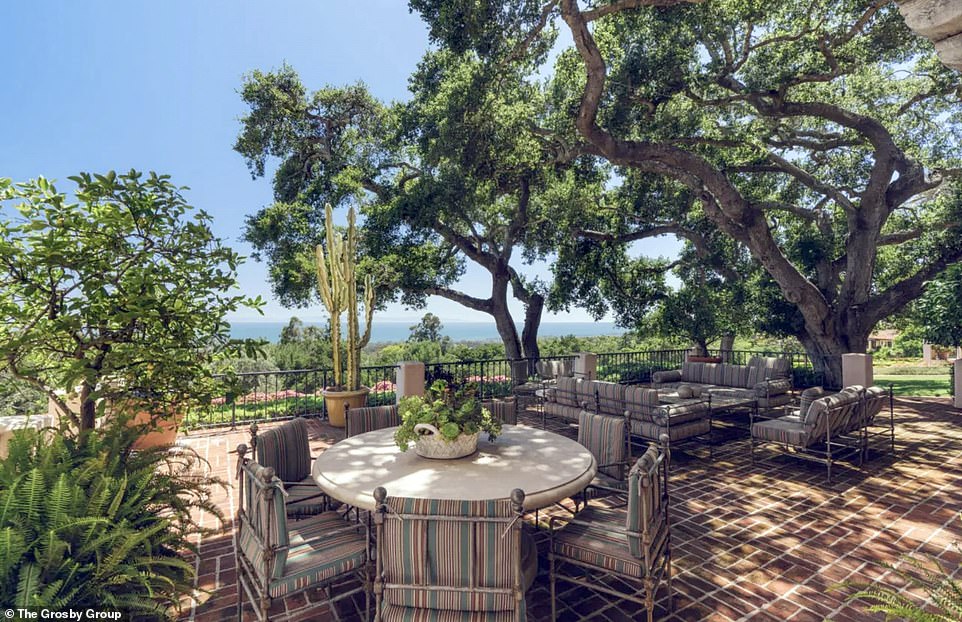 Sublime: Perry and Bloom can enjoy a breath of fresh air on their expansive patio 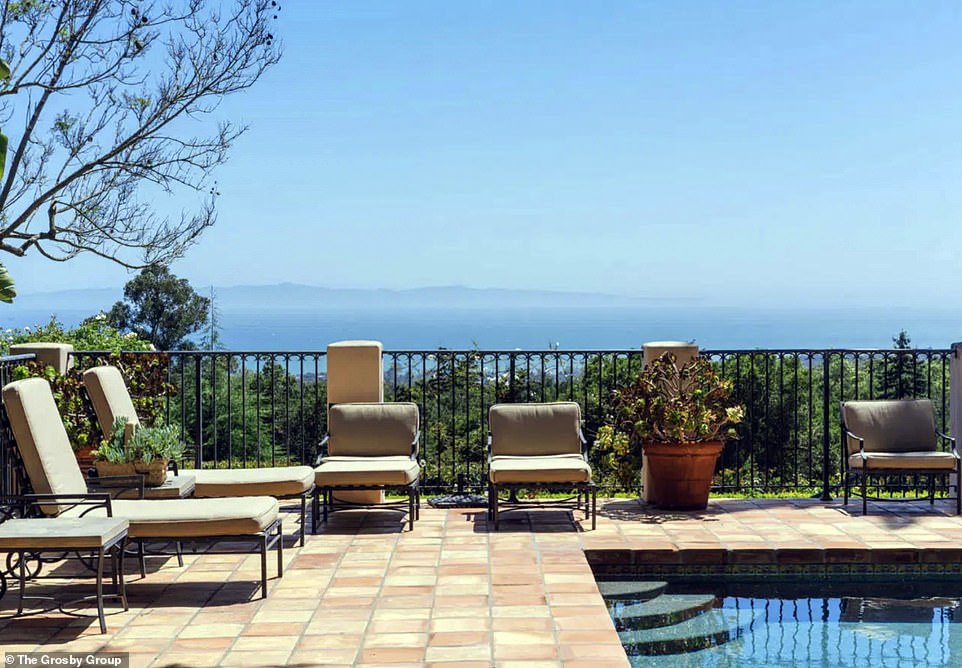 Making waves: The Pacific Ocean is visible from the pool 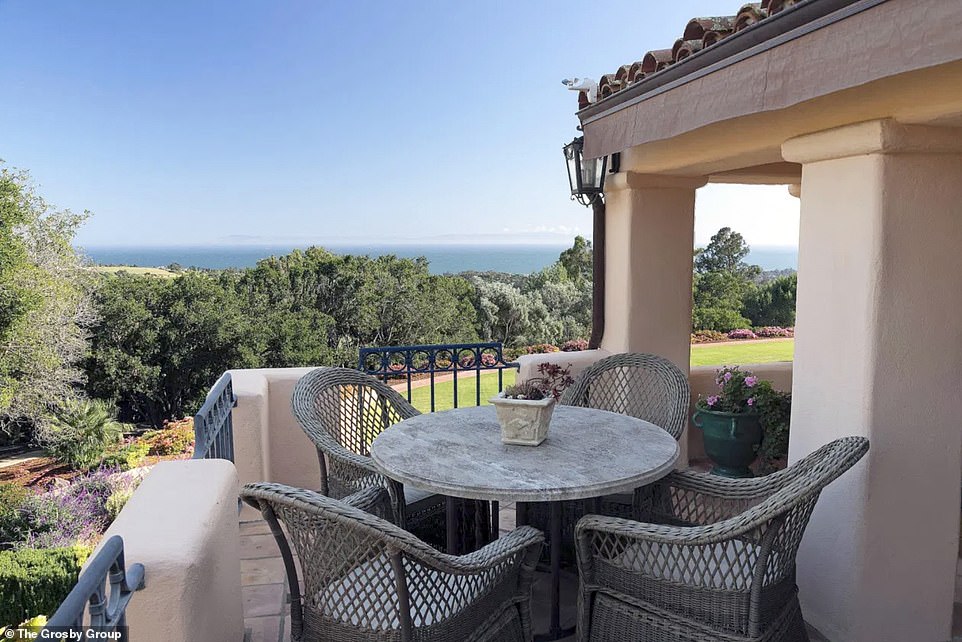 Kicking back: One corner of the property offers the perfect place to kick back and relax 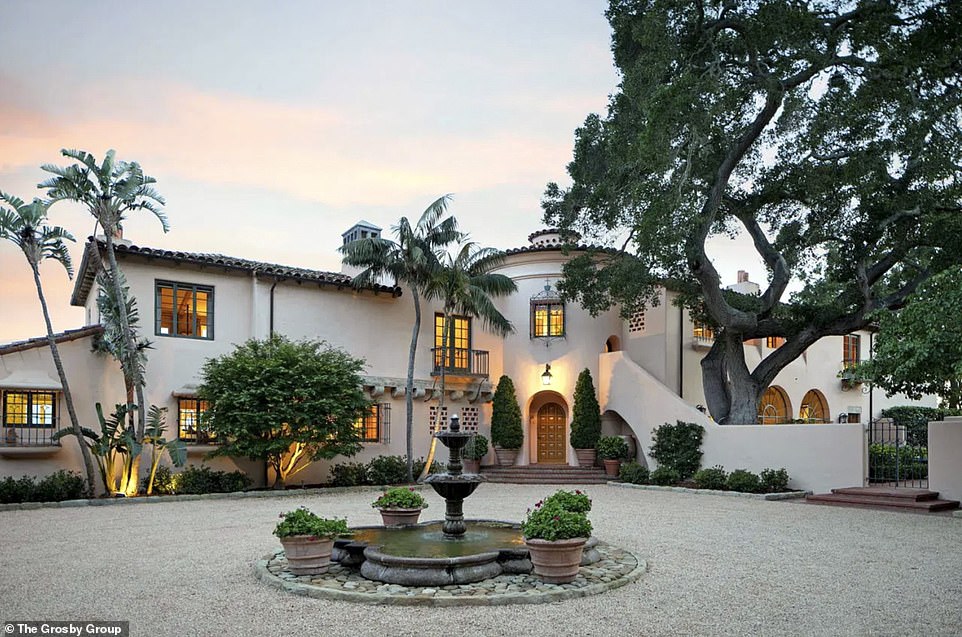 Welcome home! Guests will be greeted by a peaceful fountain sitting across the gorgeous Mediterranean villa 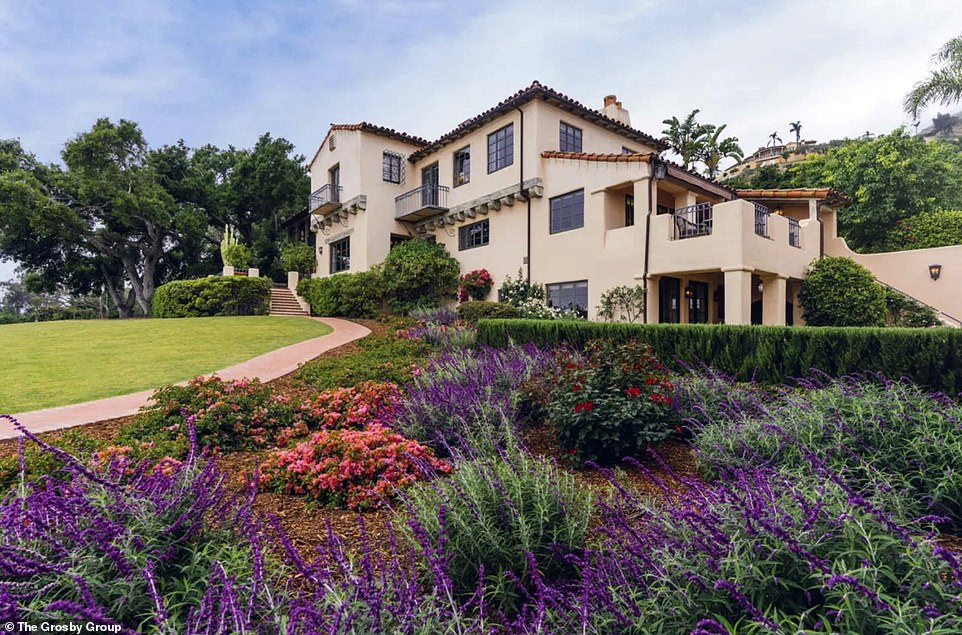 Stunning: The property comprises of multiple structures sitting upon 8.9 acres of land

The new home is just the newest addition for the couple, who have recently welcomed their first child together.

Katy gave birth to their daughter Daisy Dove in August, and the new parents announced her arrival through UNICEF.

‘We are floating with love and wonder from the safe and healthy arrival of our daughter,’ the couple announced.

The couple will be near Meghan and Harry’s home which sits on 5.4 acres of land and immaculately clipped hedges border the estate’s stone-pillared entry gates. 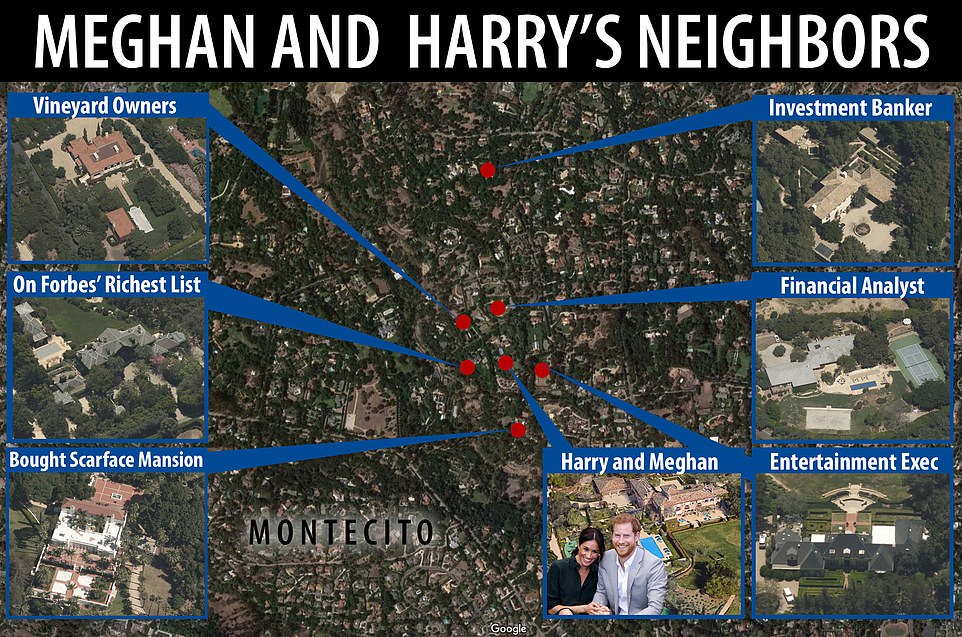 Wow: Prince Harry and Meghan’s neighbours include a billionaire behind an online university, vineyard owners, finance executives and a Houston businessman who bought the Scarface mansion as a getaway home 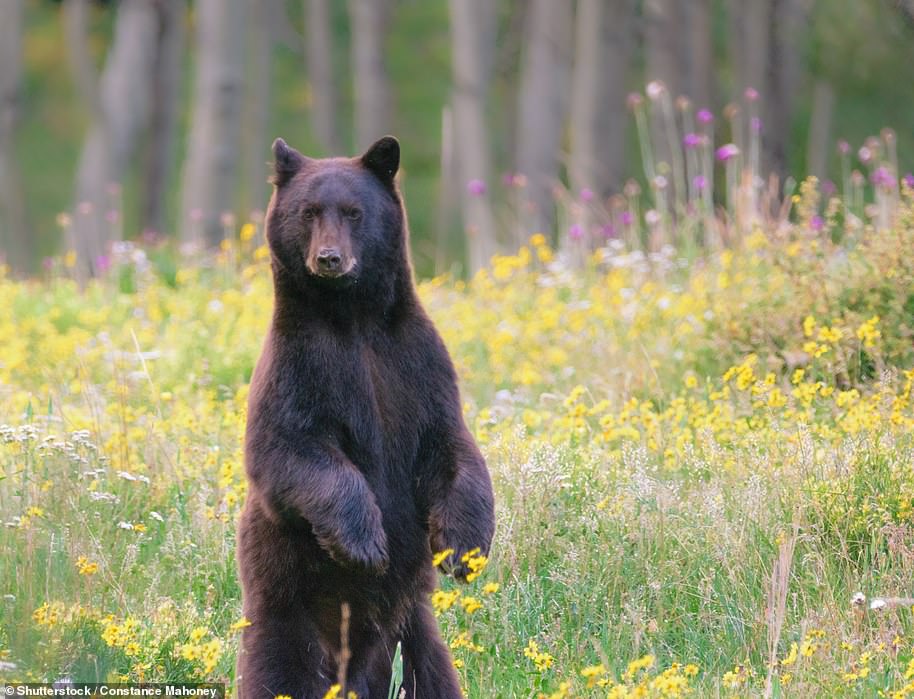 Officials say the black bear has a den on Ranchos San Carlos near the Sussexes’ mansion, which was disturbed when it was recently sold (file photo)

The entrance to the property opens onto a wide lane paved with hand-cut Santa Barbara Stone that leads through a grand archway of trees to the main residence, according to Zillow.

It also boasts a two-bedroom, two-bath guest house, perfect for Meghan’s mother Doria, who is acting as one-year-old Archie’s nanny. Doria has already been to the house, TMZ reports.

The home’s seller is thought to be Russian tycoon Sergey Grishin who bought the ‘palatial’ mansion for more than $25million in 2009 and had tried to sell the home for up to $34million before eventually accepting a loss. 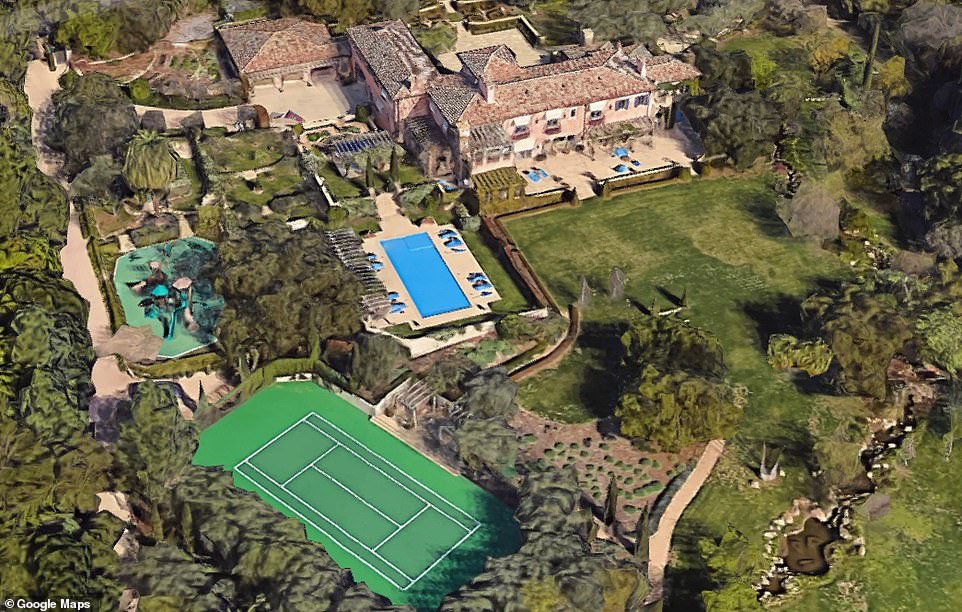 A-list lifestyle: The former royals bought a $14.7 million mansion (pictured) in the gated estate outside Montecito, Southern California in June and joined an affluent town with Katy and Orlando soon to be neighbours