Home U.S Ken Kurson is charged with cyberstalking in connection with his divorce
U.S

Ken Kurson is charged with cyberstalking in connection with his divorce

A Trump ally and close associate of Jared Kushner and Rudy Giuliani has been federally charged with harassment and cyberstalking following a routine FBI background check for a potential administration post.

Kenneth Kurson, 52, surrendered for arrest on Friday in Brooklyn, after prosecutors said he harassed three individuals online in 2015, when he was editor in chief of the New York Observer and going through a messy divorce.

In the twisted case, Kurson is accused of using the online aliases ‘Jayden Wagner’ and ‘Eddie Train’ to harass three individuals whom he appeared to blame for his divorce, according to a federal complaint unsealed on Friday.

Kurson’s attorney, Marc L. Mukasey, told DailyMail.com in a statement: ‘Ken Kurson is an honorable man, a loving dad, and a brilliant writer. This case is hardly the stuff of a federal criminal prosecution. He will get past it.’ 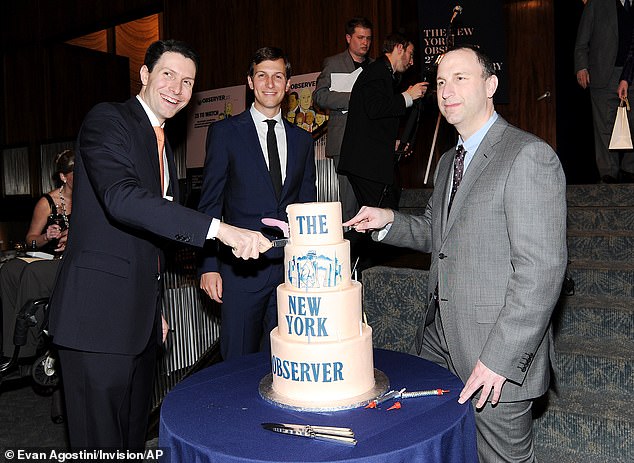 Kenneth Kurson, 52, (right) surrendered for arrest on Friday in Brooklyn, after prosecutors said he harassed three individuals online in 2015. He is seen with Jared Kushner (center) in 2013

Prosecutors say that between November 2015 and December 2015, Kurson engaged in a pattern of stalking and harassment against the three victims.

Kurson is a longtime friend of Kushner, who owned the Observer when Kurson topped the masthead, and longtime associate of Giuliani, with whom he co-authored a book.

The complaint identifies one victim as an employee of a news media outlet, and the other two are believed to work at Manhattan’s Mt. Sinai Hospital, based on previously reported details.

According to the complaint, Kurson used multiple aliases to file false complaints about two of the victims with their employer, post false negative reviews about one victim’s professional conduct on crowd-sourced review websites and made unsolicited contact with two of the victims.

One victim initially tried to smooth things over, insisting in an email that he had nothing to do with Kurson and his wife’s breakup, the complaint says.

‘Unfortunately, you have no one to blame but yourself,’ the message read. ‘It is a bitter pill to swallow, but true.’ 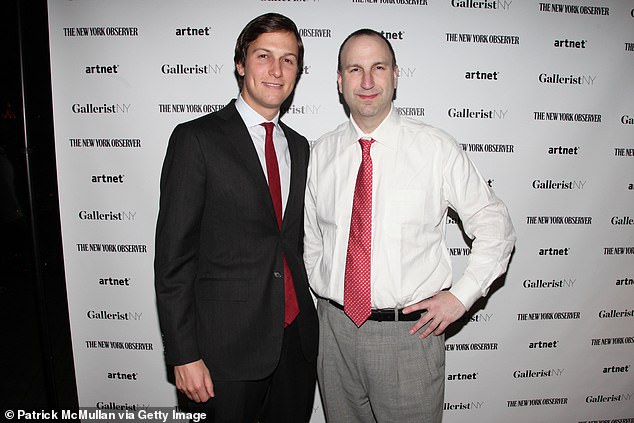 Kurson (right) is a longtime friend of Kushner (left), who owned the Observer when Kurson topped the masthead

In response, Kurson allegedly called the friend a ‘completely full of s**t phony who lies through [their] teeth and is also stupid.’

Kurson traveled on multiple occasions to the workplace of two of the victims, taking photographs and inquiring about one victim’s work schedule, prosecutors say.

The allegations came to light during an FBI background check after the Trump administration offered Kurson a seat in 2018 on the board of the National Endowment for the Humanities, a federal body that distributes grants to museums, libraries and other cultural institutions.

Kurson withdrew himself from consideration for the post after the allegations became public.

‘Kurson is alleged to have engaged in a disturbing pattern of retaliatory harassment that intimidated and alarmed several victims and their employer,’ said Acting United States Attorney DuCharme in a statement.

‘This Office is committed to protecting victims from malicious cyberstalking activity and apprehending criminals who try to rely on Internet anonymity to facilitate their crimes.’ 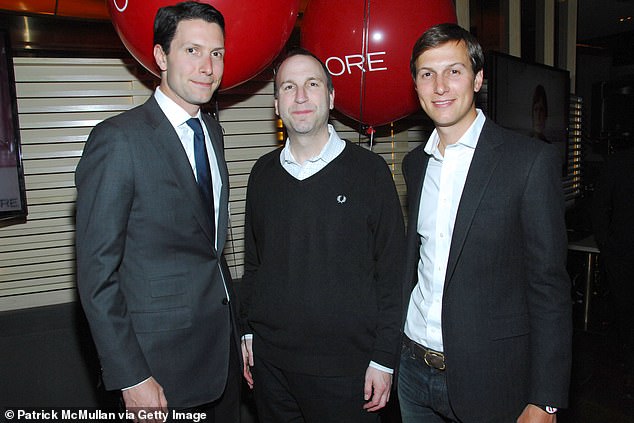 FBI Assistant Director-in-Charge Sweeney said that Kurson allegedly ‘bullied his victims by attacking their character online and attempted to intimidate them by showing up at their place of employment without a valid reason.’

‘The shadows of cyberspace may have provided him with some cover, but once his identity was revealed, he no longer had the benefit of a virtual retreat,’ Sweeney added.

According to the complaint, one of the victims underwent therapy following the ordeal, which the victims variously described as ‘traumatic,’ ‘diabolical,’ ‘insane,’ and ‘super scary.’

The hospital where two of the employees worked hired a security guard as a result of the alleged harassment, the complaint says.

Baby loss charities today applauded Meghan Markle for providing a 'vital step in breaking down that stigma and shame' around miscarriage after she...
Read more
U.S

President Trump pardoned Michael Flynn, his first national security advisor, who pleaded guilty to lying to the FBI about his contacts with Russian...
Read more

Did the Queen really not know about her cousins? The Crown fact-checked

One of the most heartbreaking storylines in The Crown season four focuses on the true story of the Bowes-Lyon sisters. These were the...
Read more

Mike Tyson will reportedly earn $10 million for his return to the ring on Saturday in Los Angeles while his opponent, Roy Jones...
Read more
Load more

Did the Queen really not know about her cousins? The Crown...