Home Tv & Show Kids born in Canada have better shot at ‘American Dream’ than those...

Canadians have a better chance at achieving the so-called “American Dream” than Americans, according to a new report from the World Economic Forum.

Kids born into poorer families in Canada have a greater chance at success than in similar families in the U.S., per the World Economic Forum[/caption]

Social mobility, per the Forum, is “is the ability of a child to experience a better life than their parents.”

It’s “an assessment of the impact” of being able to fill someone’s potential or dreams, despite their socio-economic background. 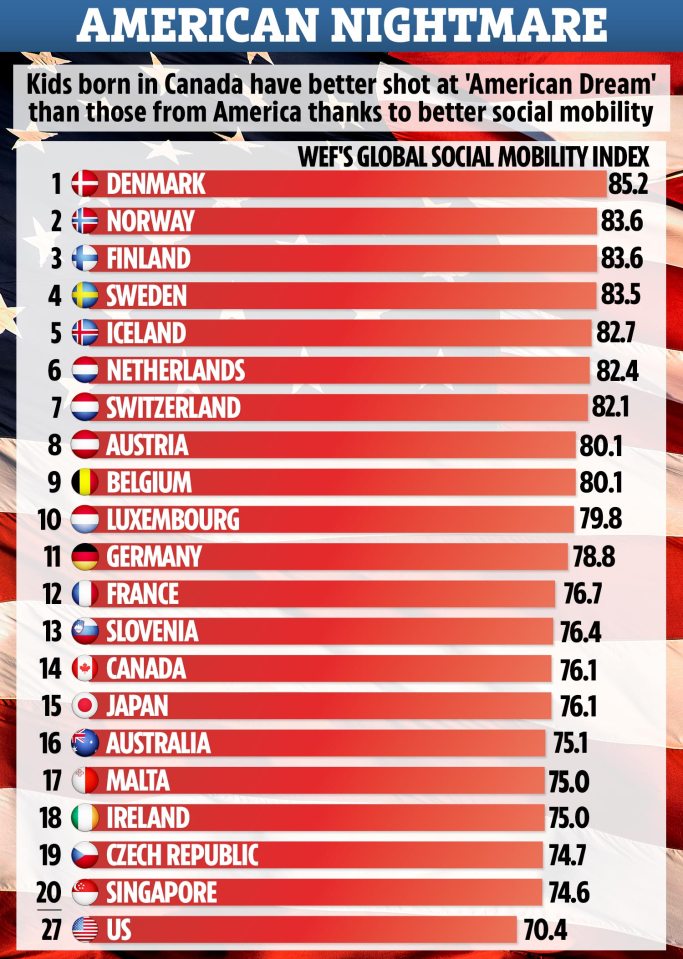 The 2020 report, released yesterday at the start of the forum in Davos, Switzerland, ranks Denmark as the number one country with the best social mobility scores.

Nordic countries including Norway, Finland, Sweden and Iceland follow, with Canada ranking 14th and the U.S. ranking much further below, in 27th place.

The World Economic Forum says the report finds “that most economies are failing to provide the conditions in which their citizens can thrive, often by a large margin.”

Canada ranked higher on the Forum’s Social Mobility Index than the U.S.[/caption]

“As a result, an individual’s opportunities in life remain tethered to their socio-economic status at birth, entrenching historical inequalities.”

The Forum’s report explains it is a major problem not only for individual people, but “also society and the economy.”

“Anything that undermines the best allocation of talent and impedes the accumulation of human capital may significantly hamper growth.”

The report says the “declining income share of labor” in relation to “an increase in the income share of capital” has driven inequality — and also “prompted a decline in equality of opportunity.”

“This is reflected in huge wage disparities, which have grown exponentially since the 1970s.”

In Denmark, for example, kids born into poorer families have a good chance at earning a higher income as adults who are born into rich families.

The World Economic Forum says world governments “must play the role of equalizer, levelling the playing field for all citizens, regardless of their socio-economic background.”

Improving “tax progressivity on personal income,” stronger support for education and learning and developing “a new social protection contract” to help workers, regardless of employment status, are suggested changes.

MOST READ IN NEWS

The report was released as the World Economic Forum began in Davos, Switzerland.

While addressing the Forum, President Donald Trump said America’s economic success during his term has been “nothing short of spectacular.”

His speech was met with near silence from the crowd — whereas in 2018, Trump was laughed and booed at.

Do you have a story for The US Sun team?

If you've been getting some strange suggested accounts from Instagram lately, this new feature is an interesting way of finding out who your...

Type 2 diabetes symptoms: This sign in your stomach could signal the chronic condition

Type 2 diabetes occurs when the body becomes resistant to insulin. Factors behind this malfunction include lifestyle choices. What does your body do...

REAL Housewives of Orange County star Gina Kirschenheiter has moved in with her new boyfriend Travis Mullen. She starts life living with her new...

Over a million families are missing out on £2,000 a year in tax-free childcare

MILLIONS of families are missing out on £2,000 a year because they are not claiming tax-free childcare. HMRC figures show that around 90 per...

Emma age rating: How old do you have to be to watch Emma? Is...

This is all which is specified as potentially inappropriate for some children, and parents should consider whether their children may find some of...

Beyonce drinks a Martini and has fans convinced she’ll sing the...

Type 2 diabetes symptoms: This sign in your stomach could signal the chronic condition