A new type of ‘exotic particle’ that is made up of four-quarks – also known as a tetraquark – has been discovered by scientists using Large Hadron Collider data.

A team from the University of Manchester said the discovery involved sifting through datasets from the first and second collider runs – between 2009 and 2018.

Quarks are formed together into hadrons which include protons and neutrons and this is the first of its kind to be made of four heavy quarks of the same type.

A quark is a type of elementary particle and a key component in the make up of matter – they combine to form composite particles called hadrons.

Physicists hope to be able to use this discovery to get a better understanding of how quarks bind themselves together to form all of the matter in the known universe. 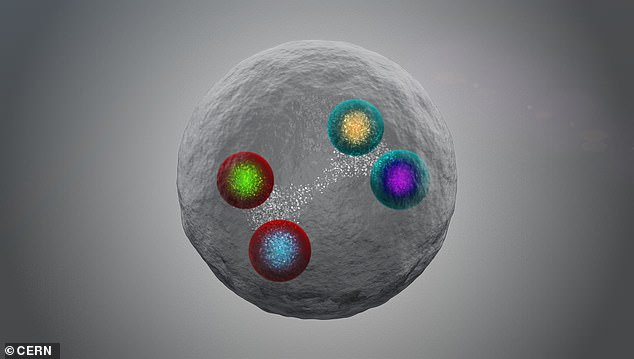 Quarks are formed together into hadrons which include protons and neutrons and this is the first of its kind to be made of four heavy quarks of the same type. Artists impression

The discovery is likely to be the first of a previously undiscovered class of particles never before seen by physicists, according to the Manchester research team.

While quarks usually combine into two or three groups when they form hadrons, scientists have long predicted there could be hadrons made of four or five quarks.

These particles made of unusual combinations of quarks are an ideal ‘laboratory’ for studying one of the four known fundamental forces of nature, authors wrote.

That force is the strong interaction that binds protons, neutrons and the atomic nuclei that make up matter.

Detailed knowledge of the strong interaction is also essential for determining whether new, unexpected processes are a sign of new physics.

It was discovered by the Large Hadron Collider beauty (LHCb) experiment that specialises in investigating the slight differences between matter and antimatter by studying a type of particle called the ‘beauty quark’, or ‘b quark’.

Researchers scour through lines of data from the first two runs of the 16.6 mile particle smashing machine under Switzerland to look for anomalies.

‘Particles made up of four quarks are already exotic, and the one we have just discovered is the first to be made up of four heavy quarks of the same type,’ says the outgoing spokesperson of the LHCb collaboration, Giovanni Passaleva.

Up until now, the LHCb and other experiments had only observed tetraquarks with two heavy quarks at most and none with more than two quarks of the same type.

The team say this new discovery ‘opens another exciting chapter in this scientific book’ and allows them to study a theory of matter particles in an extreme case.

This particle is an extreme case – it is an exotic-hadron, containing four quarks rather than the two or three in conventional matter particles.

It is also the first to contain heavy quarks, according to incoming LHCb spokesperson Professor Chris Parkes of the University of Manchester.

‘Studying an extreme system allows scientists to stress-test our theories,’ he said. 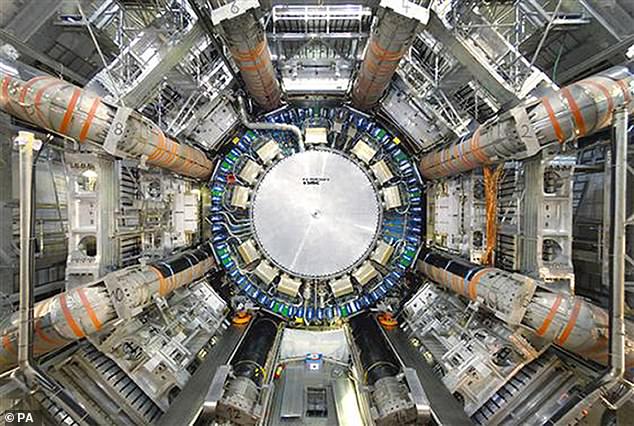 ‘Through the study of this particle, and the hope that we will discover further particles in this class in this future, we will test our theory of how quarks combine which also governs protons and neutrons.’

The LHCb team found the new tetraquark using the particle-hunting technique of looking for an excess of collision events, known as a ‘bump’.

The bump has a statistical significance of more than five standard deviations, the usual threshold for claiming the discovery of a new particle.

The team said this ‘bump’ also corresponds to a mass at which particles composed of four charm quarks are predicted to exist.

As with previous tetraquark discoveries, it is not completely clear whether the new particle is a ‘true tetraquark’, that is, a system of four quarks tightly bound together, or a pair of two-quark particles weakly bound in a molecule-like structure.

Either way, the new tetraquark will help theorists test models of quantum chromodynamics, the theory of the strong interaction, the researchers said.

The findings have been published on the arXiv preprint server.

EXPLAINED: THE STANDARD MODEL OF PHYSICS DESCRIBES THE FUNDAMENTAL STRUCTURE OF MATTER IN THE UNIVERSE

The theories and discoveries of thousands of physicists since the 1930s have resulted in a remarkable insight into the fundamental structure of matter.

Everything in the universe is found to be made from a few basic building blocks called fundamental particles, governed by four fundamental forces.

Our best understanding of how these particles and three of the forces are related to each other is encapsulated in the Standard Model of particle physics.

All matter around us is made of elementary particles, the building blocks of matter.

These particles occur in two basic types called quarks and leptons. Each consists of six particles, which are related in pairs, or ‘generations’.

All stable matter in the universe is made from particles that belong to the first generation. Any heavier particles quickly decay to the next most stable level.

There are also four fundamental forces at work in the universe: the strong force, the weak force, the electromagnetic force, and the gravitational force. They work over different ranges and have different strengths.

Gravity is the weakest but it has an infinite range.

The electromagnetic force also has infinite range but it is many times stronger than gravity.

The weak and strong forces are effective only over a very short range and dominate only at the level of subatomic particles.

The Standard Model includes the electromagnetic, strong and weak forces and all their carrier particles, and explains well how these forces act on all of the matter particles.

However, the most familiar force in our everyday lives, gravity, is not part of the Standard Model, and fitting gravity comfortably into this framework has proved to be a difficult challenge.