A Philadelphia defense lawyer’s water broke during a murder trial last week, but the hard-working mom still finished the day’s hearing before heading to the hospital to give birth.

Marni Jo Snyder, 39, was in a preliminary hearing for the trial, working alongside her husband and legal partner, Stephen Stewart, Jr., 32, when she realized she was going into labor.

But after notifying the judge, the couple decided to finish with the final witness before running off to deliver their son. 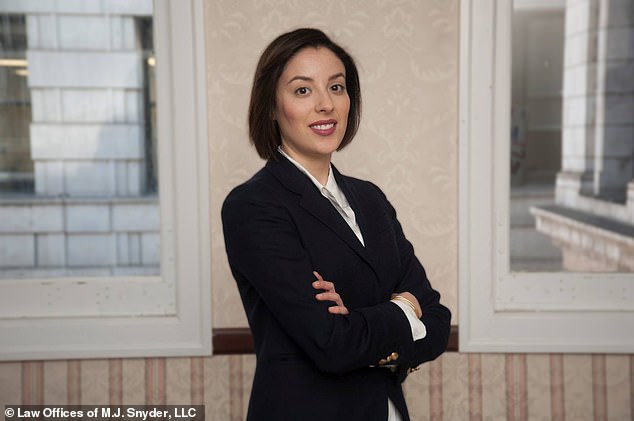 Surprise! Marni Jo Snyder, 39, was 38 weeks pregnant with her first child when she went into labor in a courtroom last week

Snyder was certainly surprised when she realized her water had broken in the middle of the hearing in the courtroom of Municipal Court Judge James M. DeLeon.

At 38 weeks pregnant with her first child, she had joked about the possibility, but hoped it wouldn’t happen.

Despite the surprise, though, she kept calm, grateful that her husband was there.

‘I didn’t panic because he was there to calm me down,’ she told Today.

‘I was not alone for a moment. He’s a very talented lawyer, so it is always a blessing to have him on a case with me, but this was a double whammy blessing.’

It could hardly go unnoticed, though, so the husband-wife defense team passed a note to court staff to let them know what was going on.

‘The judge was kind of freaking out,’ said Snyder.

But since she wasn’t in any pain and hadn’t begun experiencing contractions, she decided to finish up with the final witness. 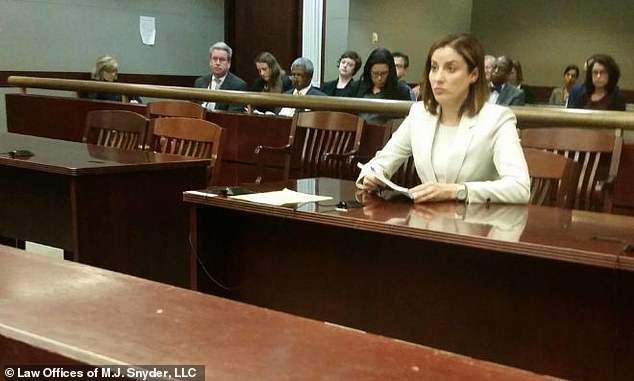 Snyder, whose law partner is her husband, finished the hearing before going to the hospital

When they were finished, Snyder stood up to go, which is when the amniotic fluid gushed down around her shoes.

She and her husband then headed straight to a nearby hospital, where they noted how funny it was that most people coming in to give birth were in sweats but she was in a custom suit.

She gave birth to a son named Stephen Stewart, III, the next day.

After they left, the judge addressed the courtroom.

‘It’s strange that in a courtroom with such sadness, there’s life,’ he said, according to the Philadelphia Inquirer.

Snyder told Today that she always thought her son would one day come to court with them, but it happened a bit sooner than they imagined.

‘[I figured] something more along the lines of “Bring Your Son to Work Day.” But this worked out perfectly,”‘ she said. 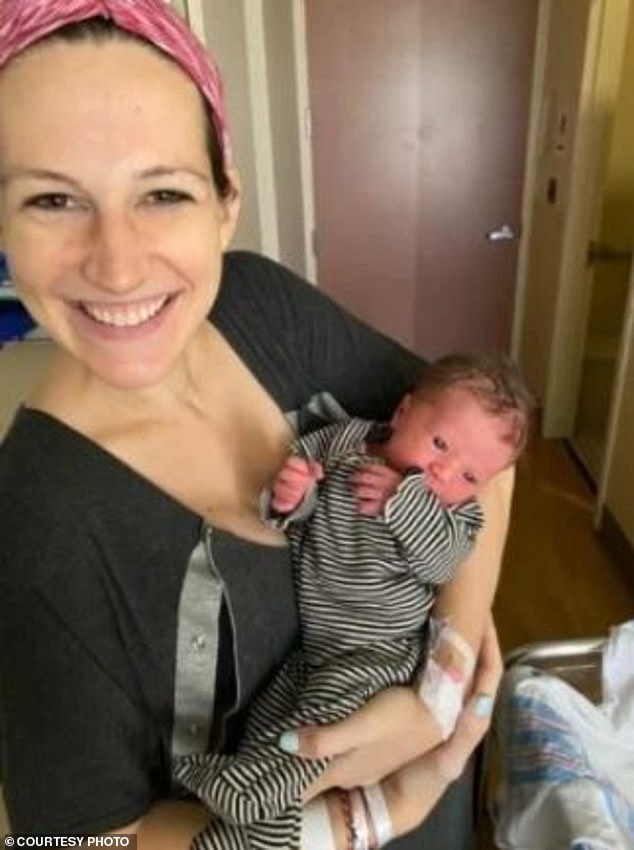 Determination! Law school graduate Brianna Hill gave birth in the middle of her bar exam earlier this month and finished the test the following day from an empty hospital room 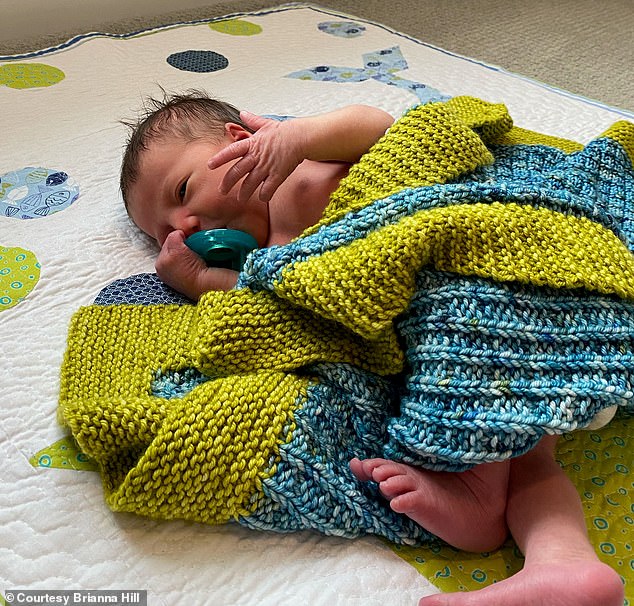 Joy: Brianna gave birth to a healthy baby boy Cassius Phillip during her test, and then completed the exam the following day, while taking breaks to nurse her newborn

Earlier this month, a Loyola University Chicago School of Law graduate gave birth to her first child halfway through sitting the bar exam.

Brianna Hill sat for the first day of the exam on Monday, October 5, and halfway through, her water broke.

The determined new mom told Above the Law that she went on to deliver her baby that same night — and then sat for the second part of the next test at the hospital the next day.

Brianna certainly didn’t intend for it to go this way, but COVID-19 changed her plans. The bar was initially scheduled to take place in July, but it was postponed due to the pandemic.

‘I thought I would only be 28 weeks pregnant when I took the bar, so when it got pushed to October and I was going to be 38 weeks, I joked about taking the test from my hospital bed. Lesson learned!’ she said.

In addition to being pushed back several months, the test was switched from in-person to online, meaning additional anti-cheating measures were put in place.

For one, test takers have to be seen looking at their screens for the four 90-minute sections spread over two days — so when Brianna started to feel something going on during day one of testing, she didn’t dare get up. 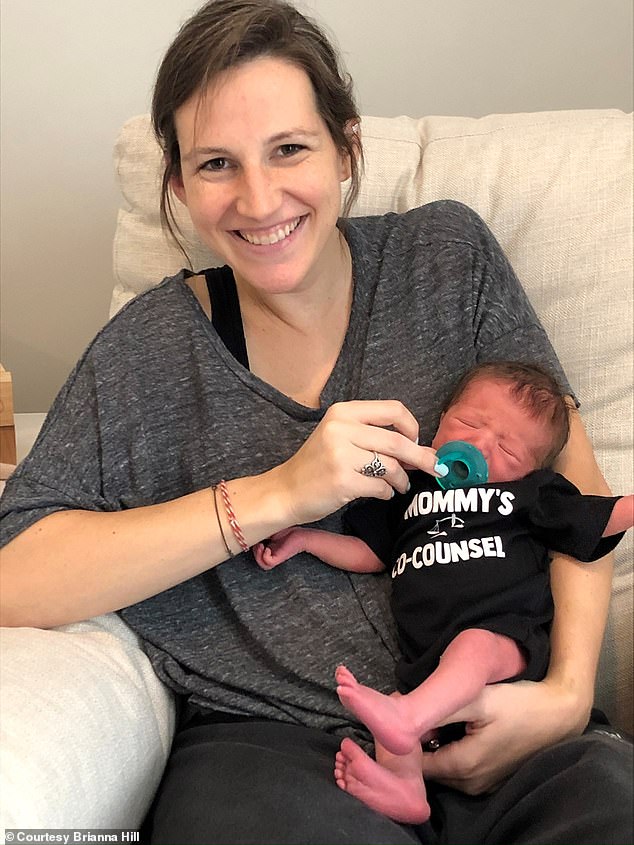 Impressive! She went into labor during the first day, gave birth that night, and completed the second day of testing at the hospital

‘I started taking the MPT [Multistate Performance Test] but since we were remote I couldn’t leave view of the camera. As soon as I stood up when I finished, I knew my water had broken,’ she said.

‘So I took my break, got myself cleaned up, called my husband, midwife, and mom, cried because I was a little panicked, then sat down to take the MEE [Multistate Essay Exam].’

While writing her essays, Brianna started having contractions, but managed to finish the test section through the pain. 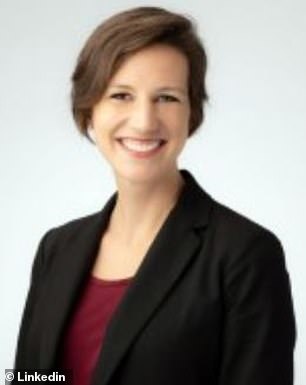 Proud mom! Despite her circumstances, Brianna says she’s grateful for her support system that saw her through the finish line of her pregnancy and test

By the time it ended, she was in active labor.

‘Going into labor really put the bar exam into perspective and made my nerves go away really quickly,’ she said.

She rushed to West Suburban Hospital in Oakpark, Illinois at 5.30pm, and at 10.10pm, her baby boy Cassius Phillip was born.

The hardest part over, Brianna was determined to finish the test on the following day. The hospital was happy to help, and put her in an empty room with a do not disturb sign.

‘I took the rest of the test in there and was even able to nurse the baby in between sessions! Obviously, I really hope I passed but I’m mostly just proud that I pushed through and finished,’ she said.

While Hill hasn’t received her bar exam results yet, she already has a job lined up.

‘I’m so thankful for the support system I had around me. The midwives and nurses were so invested in helping me not only become a mom but also a lawyer,’ she said to CNN.

‘My husband and law school friends provided me with so much encouragement so I could push through the finish line even under less than ideal circumstances. And my family, especially my sister, just kept reminding me how I could do it even when I wasn’t so sure myself.’

At least 140 American children died as a result of police-involved incidents between 2003 and 2018, a grim new study shows. And much like...
Read more
U.S