Lindsey Graham thinks his Republican colleagues should agree to a heftier coronavirus stimulus package after Mitch McConnell announced he will put forward a $500 billion bill this week.

‘There are some Republicans who don’t want to spend anymore. I disagree,’ Graham told ‘Full Court Press’ host Greta Van Susteren in a Sunday morning interview when speaking of those who don’t want another relief package in general.

‘I think we need more money, but we don’t need policy provisions like the House has, where you reward illegal immigrants with $1,200 bucks and you change election laws through the COVID relief package,’ the Judiciary chairman said.

Graham added: ‘So time will tell, and I think the president is right to want to go big, but it’s got to be big and smart.’ 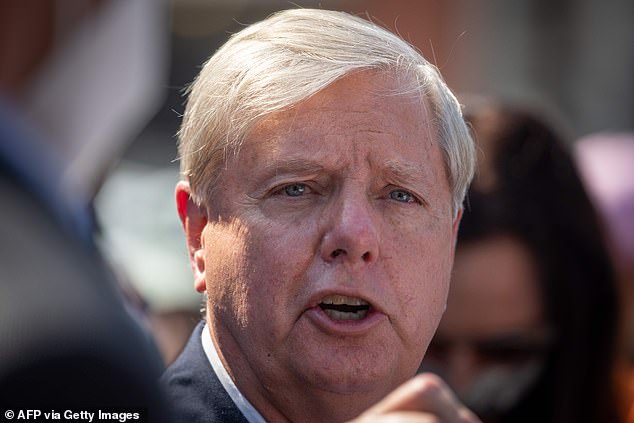 Senate Majority Leader Mitch McConnell revealed Saturday that the Senate will vote Wednesday on the next relief package the Republican-controlled chamber is putting forward.

‘I just announced the Senate will vote next week on hundreds of billions more dollars for relief programs that Democrats do not even oppose,’ McConnell wrote in a statement posted to Twitter.

The Kentucky Republican took a jab at Pelosi in his memo, adding that ‘Working families have already waited too long for Speaker Pelosi’s Marie Antoinette act to stop. Let’s make law.’

The Senate will also cast a separate vote on Tuesday regarding more funding for the Paycheck Protection Program, which expired in August.

On Saturday evening, Pelosi gave the White House a 48-hour deadline to resolve the contentious COVID-19 relief negotiations, which have become increasingly rooted in partisanship.

Discussions over federal aid have pulled Democrats and Republicans on Capitol Hill into an ongoing, back-and-forth battle over the next deal’s provisions.

But on Saturday evening, the House Speaker’s office revealed that Pelosi had an hour-long phone conversation with Treasury Secretary Steven Mnuchin.

It’s unclear what stands to happen if the deadline, set for Monday, is not met. 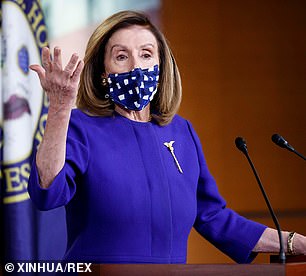 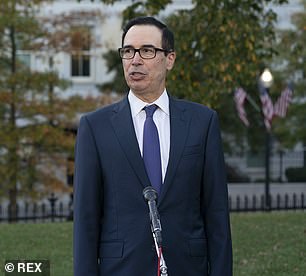 ‘The Speaker and Secretary Mnuchin spoke at 7:40 p.m. by phone tonight for just over an hour,’ Drew Hammill, Pelosi’s chief of staff, wrote on Twitter.

‘While there was some encouraging news on testing, there remains work to do to ensure there is a comprehensive testing plan that includes contact tracing and additional measures to address the virus’ disproportionate impact on communities of color.’

‘There remains an array of additional differences as we go provision by provision that must be addressed in a comprehensive manner in the next 48 hours.’

Hammill then called on the White House to prove its commitment to reaching an agreement on the relief aid.

‘Decisions must be made by the White House in order to demonstrate that the Administration is serious about reaching a bipartisan agreement that provides for Americans with the greatest needs during the pandemic,’ wrote Hammill.

A spokesperson for Mnuchin told The Wall Street Journal that he and Pelosi were expected to speak again on Monday night. 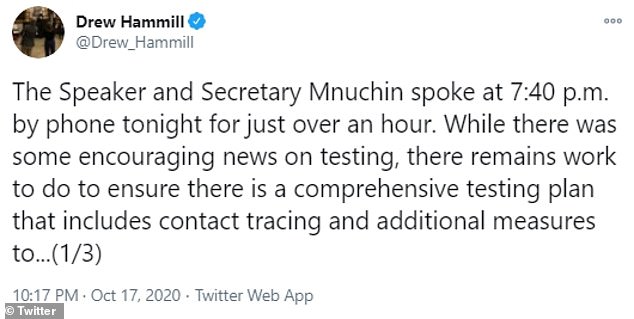 Drew Hammill, Nancy Pelosi’s chief of staff, released a statement on Twitter that provided an update on the ongoing COVID-19 relief negotiations

Senate Majority Leader Mitch McConnell revealed on Saturday that the Senate was scheduled to vote next week on relief programs.

‘I just announced the Senate will vote next week on hundreds of billions more dollars for relief programs that Democrats do not even oppose,’ he wrote.

McConnell took a jab at Pelosi in his statement, adding that ‘Working families have already waited too long for Speaker Pelosi’s Marie Antoinette act to stop. Let’s make law.’

The Senate will vote on Tuesday regarding more funding for the Paycheck Protection Program. PPP authorization expired in August.

Most recently, the White House unveiled a $1.88trillion proposal that came just one week after House Democrats passed the $2.2trillion relief bill this month.

Although both sides have made efforts to combat the financial fallout of the pandemic, they’ve struggled to find common ground on important policy issues. 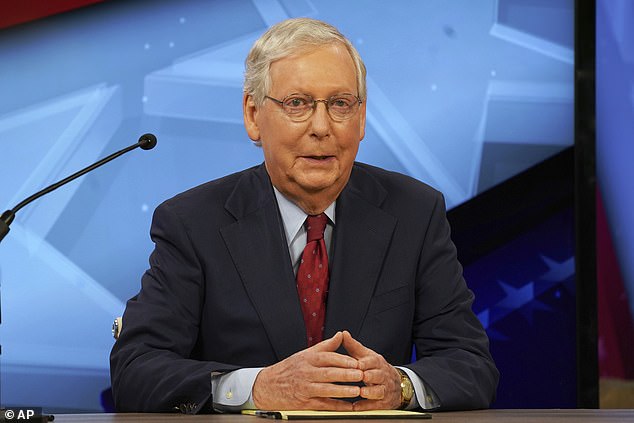 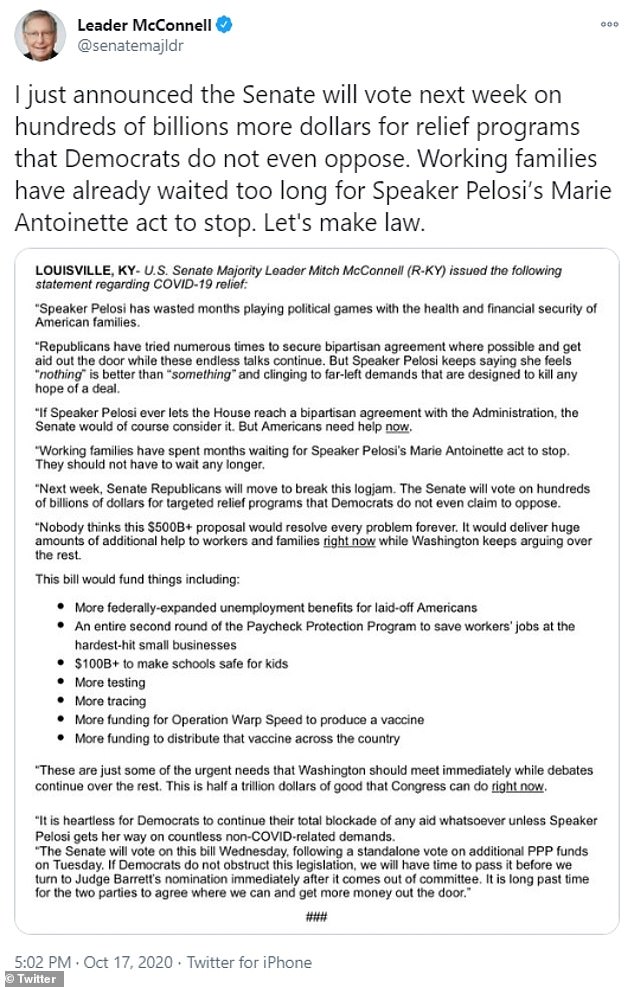 Those disagreements have included how much funding to give state and local governments, as well as whether businesses should receive legal protections amid the pandemic.

In one instance, McConnell rejected a short-term spending bill draft from House Democrats that was intended to extend federal funding packages through December 11.

He blasted the draft as ‘shameful’ for not including provisions aimed at American farmers, a voting bloc that the Trump administration has devoted billions in relief to amid his trade wars and the pandemic.

Trump briefly stopped negotiations until after the November election, but reversed that decision and declared he wanted a bipartisan agreement.

Republicans have pushed for a series of singular bills, while Democrats have advocated for a sweeping package that addressed several sectors of the pandemic.

Trump also said he was willing to spend more than the $1.88trillion White House package, but that would likely be a hard sell to some Republicans.

‘A massive bill is a base killer. I don’t think it’s politically smart to be doing this for people that supported Donald Trump and a Republican Senate,’ GOP Sen. Ron Johnson of Wisconsin told WSJ.

‘At some point in time, people will wonder: why are we voting for Republicans?…Or why vote at all?’ 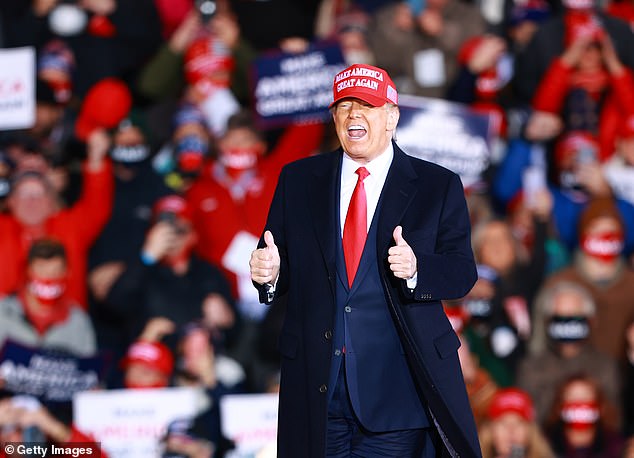 After halting COVID-19 relief aid discussions until after the November election, Trump reversed course and expressed interest in a bipartisan deal

Some GOP members have said nearly $2trillion in funding, in addition to the $3trillion approved by Congress, is too steep.

A handful Senate Republicans haven’t backed any extra funding, while others argued anything more than $1trillion is not enough, WSJ reports.

Republicans will their hands full in the upcoming weeks as they attempt to prepare for the November election, construct tangible relief aid and vote on Supreme Court Justice nominee Amy Coney Barrett.

‘If Democrats do not obstruct this legislation, we will have time to pass it before we turn to Judge Barrett’s nomination immediately after it comes out of committee,’ said McConnell in his statement.

WSJ reports that Democrats will likely block the next wave of bills from Senate Republicans.

They’ve labeled the GOP’s bill insufficient given the scope of the pandemic.

Facebook
Twitter
Pinterest
WhatsApp
Previous articleThe future of concerts? The Flaming Lips and fans rock out inside plastic bubbles during show
Next articleHow to make the perfect G&T – the simple ice cube trick you might not be aware of

American car brand SSC has been confirmed as setting a new world record top speed for a production vehicle when its Tuatara hypercar...
Read more
U.S

Wedding for rabbi's grandson where 10,000 people were expected is scaled down to 'virtual event'

The daughter of a hiker who has been rescued in Zion National Park after spending 12 days alone with no food and limited...
Read more

American car brand SSC has been confirmed as setting a new world record top speed for a production vehicle when its Tuatara hypercar...
Read more

The guest answered: “I know what it is, I know the sort of year it was, it was around 2004, it’s basically just...
Read more

Per Mertesacker suggests Mesut Ozil's 'focus has changed' because he got...
Read more

Fauci reportedly quotes ‘The Godfather’ in response to Trump criticisms

Borrowing a line from “The Godfather,” Dr. Anthony Fauci reacted to President Trump’s takedowns by saying that the presidential broadsides were “nothing personal,...
Read more
Load more

Per Mertesacker suggests Mesut Ozil's 'focus changed' because he got MARRIED...