The Sunshine State could be the key to re-election for President Donald Trump, though the Real Clear Politics polling average has Democratic nominee Joe Biden ahead narrowly – by just 1.4 per cent.

The Trump campaign will need to cut into an early advantage Democrats have posted in mail-in ballots. 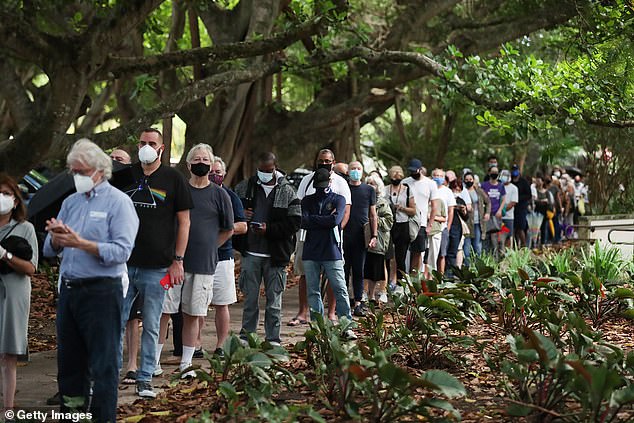 A line of voters wait to cast early ballots in the 2020 presidential election Monday in Coral Gables, Florida 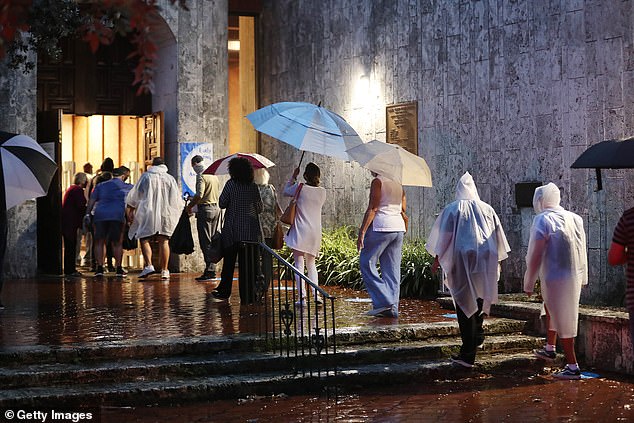 Voters wait to get into a polling place in Coral Gables on Monday, the first day of early voting in the state, which could be the key to President Donald Trump’s re-election chances 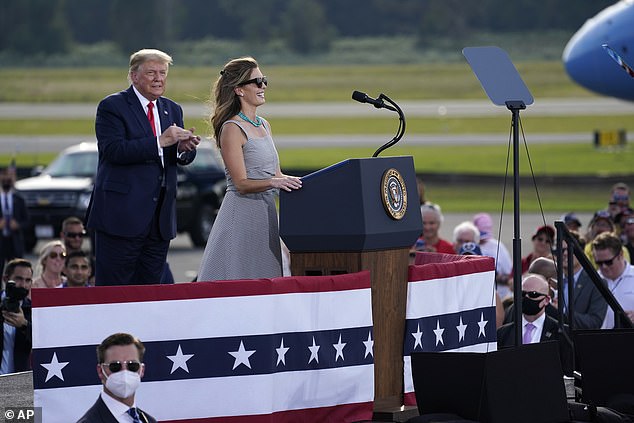 President Donald Trump (left) traveled to the state twice last week. Here he appears at a Ocala, Florida rally with aide Hope Hicks (right). Both Trump and Hicks recently recovered from the coronavirus 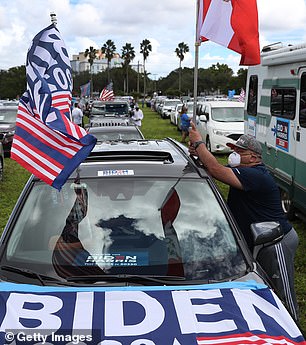 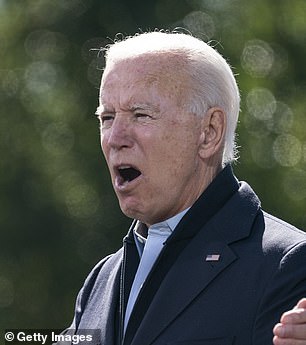 Democrat Joe Biden (right) has a tiny edge in the Real Clear Politics polling average. He campaigned in the state last week, while supporters on Sunday participated in Florida-based caravan (left) 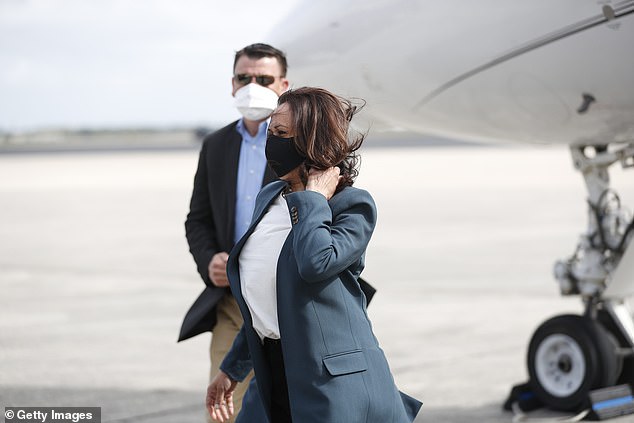 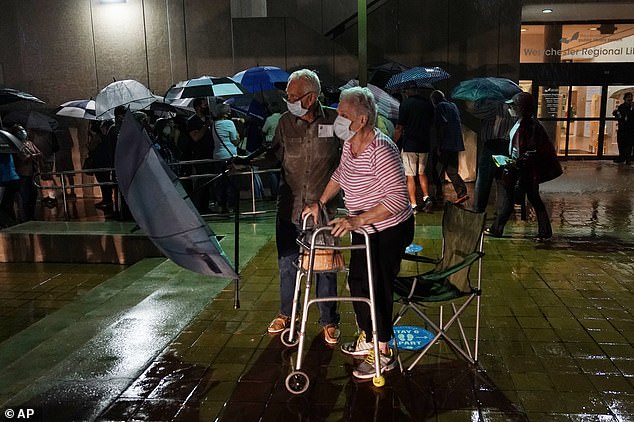 A couple stands in line waiting to vote Monday in Miami, Florida as the Sunshine State’s polls opened

Since returning to the campaign trail a week ago after recovering from COVID-19, Trump has traveled to Florida twice. Ivanka Trump will travel to Florida Wednesday.

Both Trump and Biden were supposed to be in Miami last week for the second presidential debate, but it was cancelled after the president refused to participate virtually.

With its 29 electoral votes, Florida is crucial to both candidates but especially so for Trump, who moved his official residence to his Palm Beach estate Mar-a-Lago from New York last year.

A Florida loss would make it nearly impossible for Trump to reach the 270 electoral votes needed to retain the White House over the former vice president.

Under state law, counties can offer up to two weeks of early voting and many do, including Miami-Dade, Broward, Palm Beach and other population centers. Large counties offer multiple sites and all counties allow those who have received mail-in ballots to drop them off. 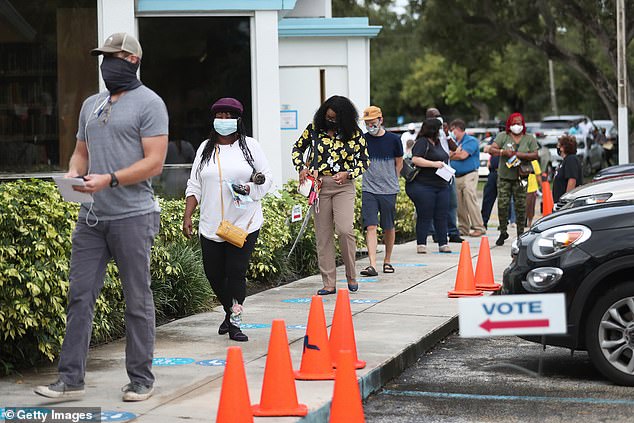 Voters, wearing masks to prevent the spread of COVID-19, stand in line waiting to vote Monday in Miami, Florida 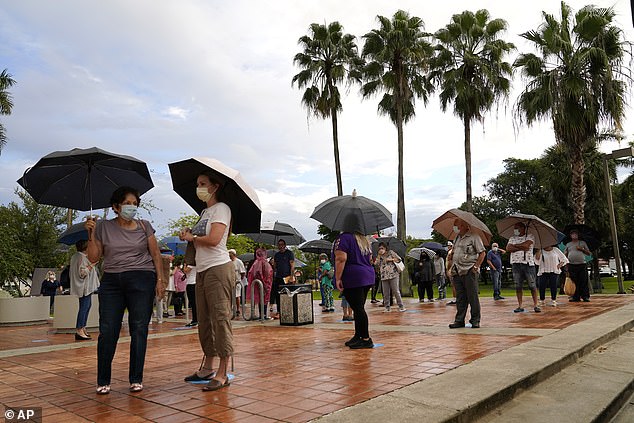 A slight drizzle douses the crowd waiting to vote Monday in Miami, Florida as early voting begins in the Sunshine State 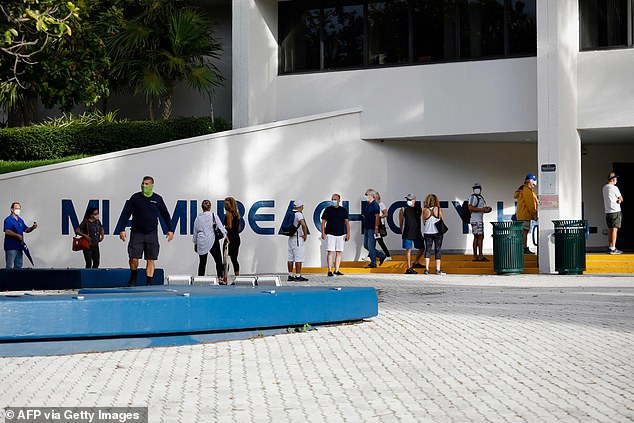 The latest a county can start early voting is Saturday.

About 2.5 million mail-in ballots have already been cast, with Democrats returning 1.2 million and Republicans about 755,000 as of Sunday. Non-affiliated voters and third-party members make up the rest.

The number of mail-in votes is already approaching the 2.7 million cast in 2016 when Republicans had a 70,000-vote margin on returns. Trump defeated Hillary Clinton in the state by about 113,000 votes.

No Republican has won the presidency without winning Florida since Calvin Coolidge in 1924.

Florida Republicans have said they aren’t worried about the mail-in gap, believing any advantage Biden gets will be swamped by Trump supporters casting in-person ballots starting this week and on Election Day.

They believe Democrats are ‘cannibalizing’ their own votes – moving in-person voters to mail-in without increasing their overall support.

They point to their increased voter registration, which narrowed the Democrats’ lead to 134,000, down 327,000 four years ago.

Some elections in Florida have been won on the thinnest of margins, becoming the center of intense focus during recounts of ballots – including the 2000 presidential race between Republican George W. Bush and Democrat Al Gore.

Elections officials are predicting that between mail-in ballots and early voting, about 70 per cent of the ballots expected will be cast before Election Day.

The state allows those ballots to be processed, but the actual count remains secret until after the polls close Nov. 3.

Mail-in ballots, with few exceptions, must be received by 7 p.m. November 3.

Facebook
Twitter
Pinterest
WhatsApp
Previous articleAfter Barca and Real lost on the same day for the first time in 20 years…LaLiga looks wide open
Next articleWill builders merchants have to close?

Mexico arrests three for 2019 murder of Mormon women and children

Mexican authorities have arrested three individuals linked to the 2019 massacre of three Mexican-American mothers and six of their children who lived in...
Read more
U.S

Daughter of John Gilbert Getty, 52, pays tribute to her dad after he was found dead in a Texas hotel

The daughter of Getty oil heir John Gilbert Getty has paid tribute to her late father, who was found dead at a San...
Read more

"If you were to place all the royals on some sliding scale of PDAs and tactile behaviour in public you’d see Charles close...
Read more

With many other health risks, its easy to forget about an issue until it is too late. Many are unaware of the importance...
Read more
Load more