Seldom has the Maldives looked so good. Its over-water villas, calm seas and brilliant white sand mean it has long been the go-to destination for honeymooners.

But now that the British Government has opened up an air corridor to the Indian Ocean country, it’s become one of the few winter-sun destinations to which we can travel without having to quarantine for a fortnight on our return — although holidaymakers will need to show a negative Covid test on arrival in the Maldives. Plus, there are some amazing deals out there just waiting to be snapped up.

The Maldives is pulling in a varied crowd, with everything from surfing to aerial yoga on offer. If your pockets are deep, you can ditch snorkelling for the entrancing marine world on a submarine, or even stay in an underwater villa. 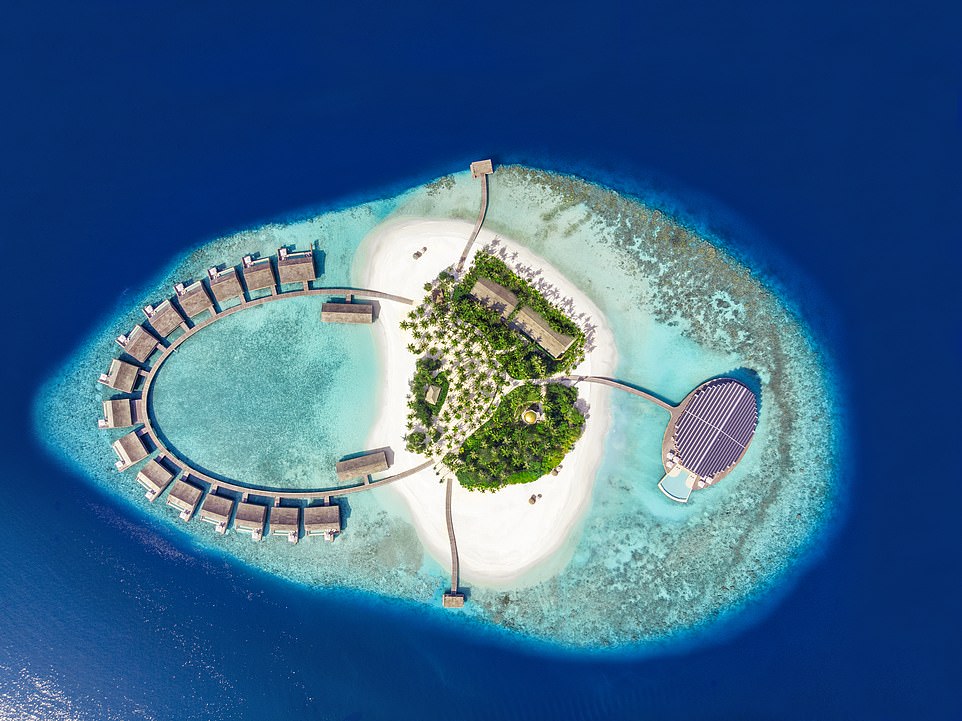 Seldom has the Maldives looked so good. The British Government has just opened up an air corridor to the Indian Ocean country. Pictured is the Kudadoo Maldives resort in the Lhaviyani Atoll

But how to choose among the 167 resorts with their seemingly identikit villas on stilts?

Well, that’s where we come in…

* Prices include direct flights with BA and transfers, unless otherwise stated. If the flights include a stopover, a 14-day quarantine is required on return. 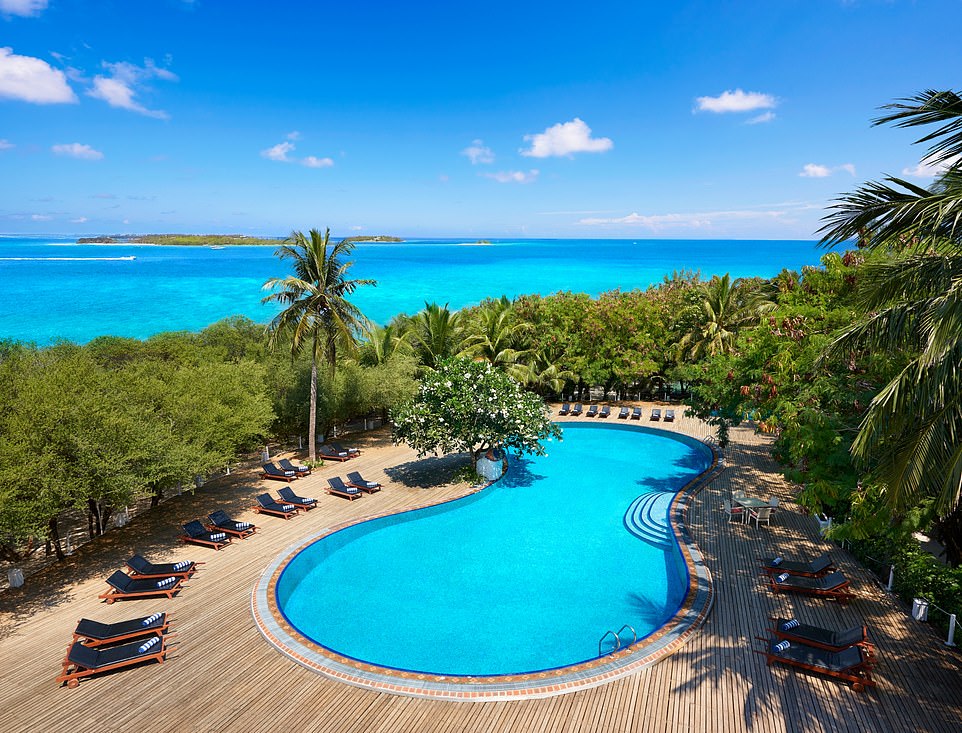 The pool at Cinnamon Dhonveli on North Malé atoll, where a week costs just over £1,500 — with flights

The Maldives’ translucent blue seas and white sands usually come with a hefty price tag. But a week at Cinnamon Dhonveli on North Malé atoll, costs just over £1,500 — with flights. You don’t have to fork out for expensive meals either, as it’s all-inclusive. There’s a dive centre and spa, plus 152 comfortable rooms and buffet-style restaurants. 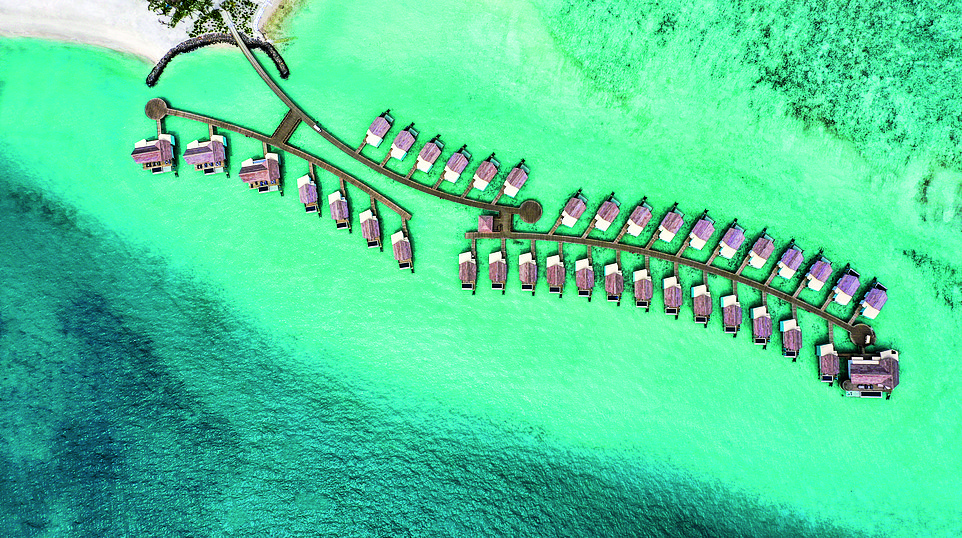 The Hard Rock Hotel is located on Emboodhoo Lagoon. Its modern rooms come with free guitar hire and the pool has underwater speakers

Head for The Hard Rock Hotel, where the pool has underwater speakers, the modern rooms come with free guitar hire, and live music fills the air after sunset. On Emboodhoo Lagoon, a 15-minute speedboat ride from the airport, the hotel has a kids club and spa; some of the 178 rooms have private pools.

Star turn: You’re not confined to one island — a bridge leads to a public neighbouring island, with everything from diving to Jiu-Jitsu on offer, plus boutiques and restaurants. 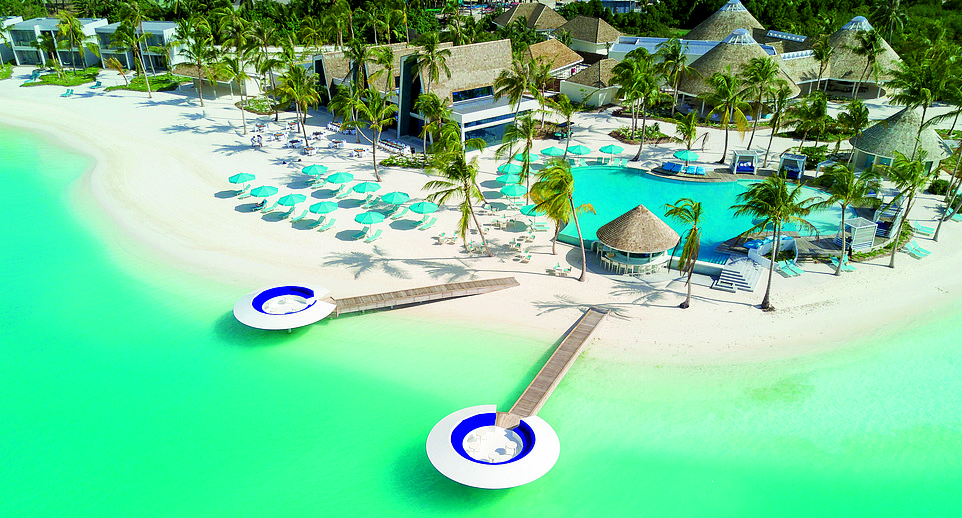 The Kandima resort, pictured, offers a range of activities from pottery, art and cookery to diving with hammerhead sharks

You don’t expect an island you can walk across in less than half an hour to be as jam-packed with activities as Kandima, a flight and boat transfer from the airport. You can do everything from pottery, art and cookery to diving with hammerhead sharks. There’s a football field and tennis and badminton courts, plus 11 bars and restaurants.

The style is contemporary cool, with 272 villas and studios, one of the biggest pools in the Maldives and a large kids club. 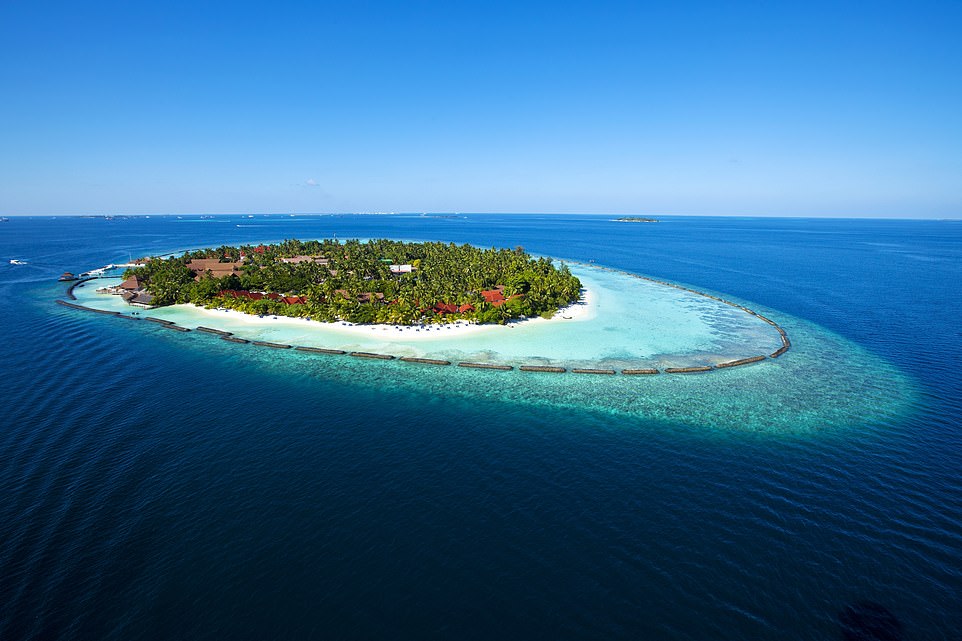 The Kurumba resort, pictured, is a ten-minute boat ride from the airport. It has 180 modern beachfront rooms 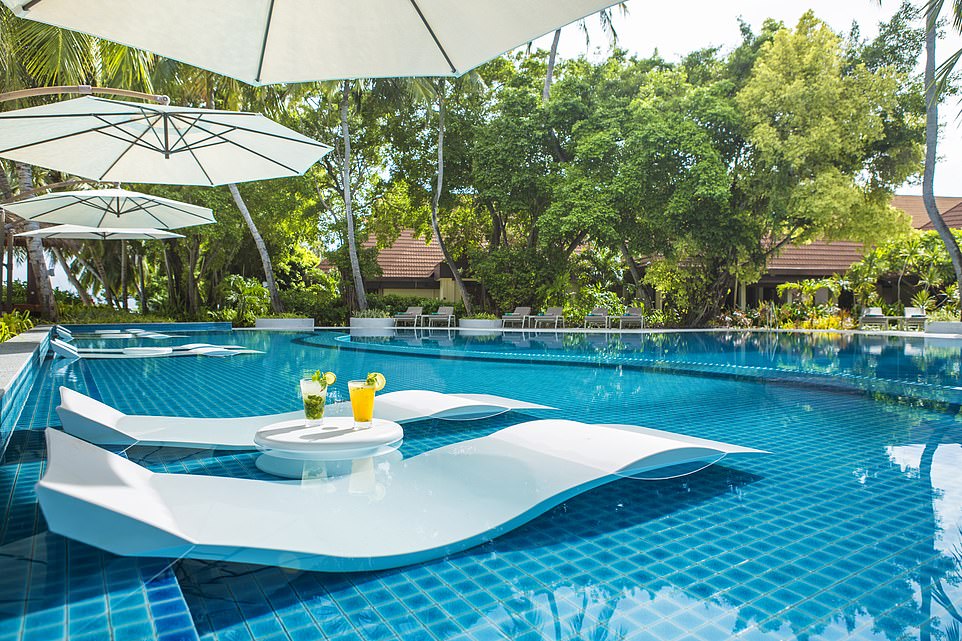 Kurumba was the original Maldivian resort, which once had shacks made from coconut palms. Pictured is one of its current-day pools

There are no lengthy transfers to Kurumba; it’s a ten-minute boat ride from the airport. Children are well catered for, with a kids club and two children’s pools, complementary kayak use, scuba lessons and children’s menus in all eight restaurants. The original Maldivian resort which once had shacks made from coconut palms, Kurumba now has 180 modern beachfront rooms.

Here’s a deal: Seven nights all-inclusive with flights via Dubai departing on dates between January 11 and April 30 2021 from £2,679, saving 27 per cent (tropicalsky.co.uk).

If you’re after Mykonos in the Maldives, look no further than Finolhu on Baa Atoll. A spectacular sandbank is home to a crab shack as well as a beach bar, with pool, beach cinema and appearances by world-class DJs. Things really come alive at night, with fire dancing and aerial silk acrobatics as well as full moon parties.

Both Cara Delevingne and Paris Hilton have been here.

Star turn: For something different from the 125 villas, check into the Beach Bubble Tent, with a butler, on its own beach (£660 a night).

Best for surfing in style 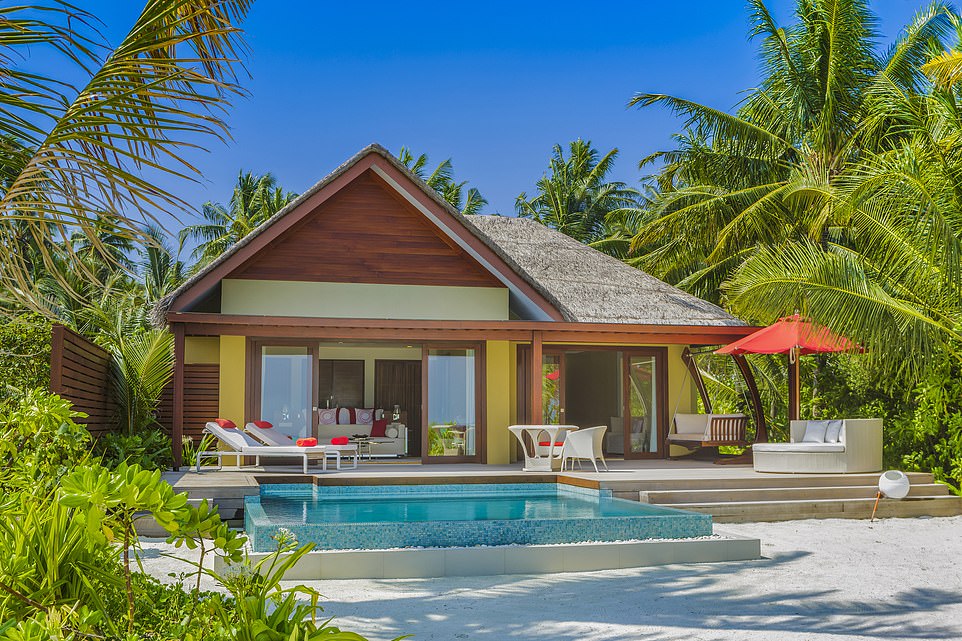 Niyama, pictured, on Dhaalu Atoll is the Maldives’ only luxury resort that has surfable waves breaking directly onto land

1.5m — the average ground elevation above sea level, making it the lowest country in the world.

32ft — the average size of the whale shark, the largest fish in the world, found in the Maldives.

5% — the proportion of the world’s beaches that, like those on the Maldives, are made from coral, with powder-fine, white sand.

1972 — the year tourism started in the Maldives, in Kurumba Island Resort.

521 — the most people freediving simultaneously, staying underwater for 30 seconds, setting a Guinness World Record in 2019 in the Maldives.

The Maldives’ only luxury resort with surfable waves breaking directly onto land, Niyama on Dhaalu Atoll caters to both beginners and expert surfers.

You can also snorkel with hammerheads, learn to dive or go kite surfing and parasailing. Activities are based on one of the twin islands called Play, with stylish beachside villas. The other island — Chill — is home to a spa and overwater villas. Children are welcome, with different clubs according to age.

Star turn: Take a speedboat to the underwater restaurant, with its shell ceiling and eat as you watch the sealife.

Here’s a deal: Seven nights half board on selected dates in April 2021 from £10,299 for two adults and two children, saving 25 per cent (turquoiseholidays.co.uk).

Yes, you’ll get indulgences a-plenty at Six Senses Laamu, with its spa, ice-cream studio, cinema under the stars and 97 thatched villas. But sustainability is still taken seriously: organic veg is grown using aquaponics, glass is recycled into cement, towels into flower pots.

Participate in reef clean-ups and turtle studies and send the kids to the marine biology club.

Star turn: As well as seeing manta rays, sharks and turtles by day, you can take a blackwater diving experience at night to see micro creatures, guided by a string of LED lights.

Here’s a deal: Seven nights half board on selected dates in December from £3,399, saving 40 per cent (turquoiseholidays.co.uk).

The clue is in the name: Kagi Spa Island Resort puts wellness right at its core. Opened last month, it features everything from crystal healing to lifestyle coaching and nutrition lessons. A gym and dive centre are also available for guests in the 50 villas, which have private pools and indoor-outdoor bathrooms.

Here’s a deal: Seven nights half board with indrect flights via Doha departing on selected dates in November from £3,009, saving 40 per cent on accommodation (magicofmaldives.com).

Best for kicking back 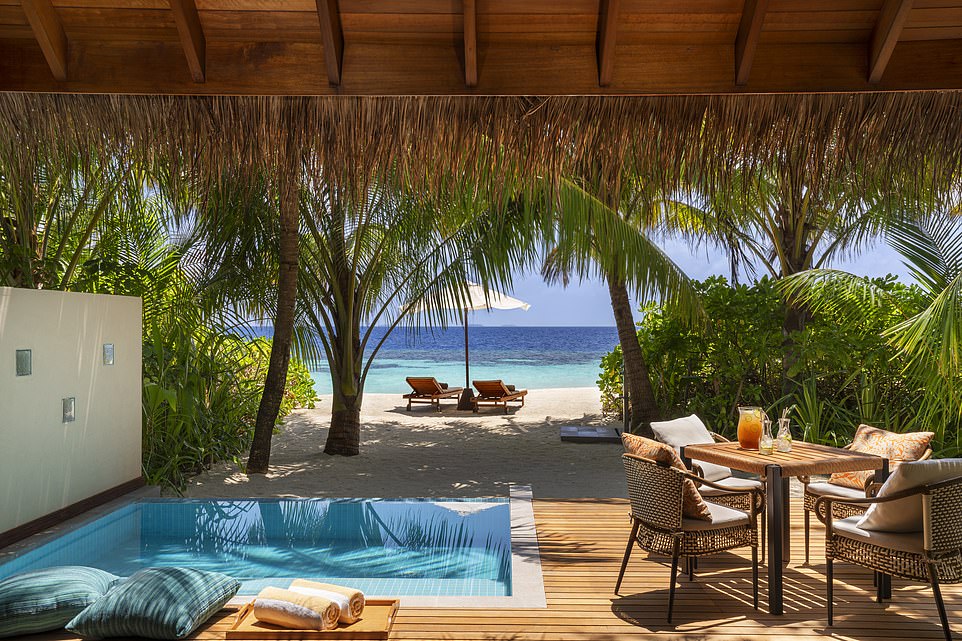 Huvafen Fushi, pictured, is a 30-minute boat transfer from Malé. Seven nights B&B starts from £4,730pp on selected dates in November and February

There’s everything from an outdoor seawater floatation pool to stargazing from a 65ft dhoni boat on offer at Huvafen Fushi, a 30-minute boat transfer from Malé. Join a marine biologist to explore the house reef, then watch more fish through the glass floor of your Ocean Bungalow. Dinner options include a Japanese restaurant — or you can dine on the dhoni, which is also available for overnight stays.

Star turn: Spa treatments are given an extra zen-like feel in the underwater treatment rooms, 8m below the surface, with a kaleidoscope of marine life outside.

Here’s a deal: Seven nights B&B from £4,730pp departing on selected dates in November and February, saving 45 per cent (abercrombiekent.com). 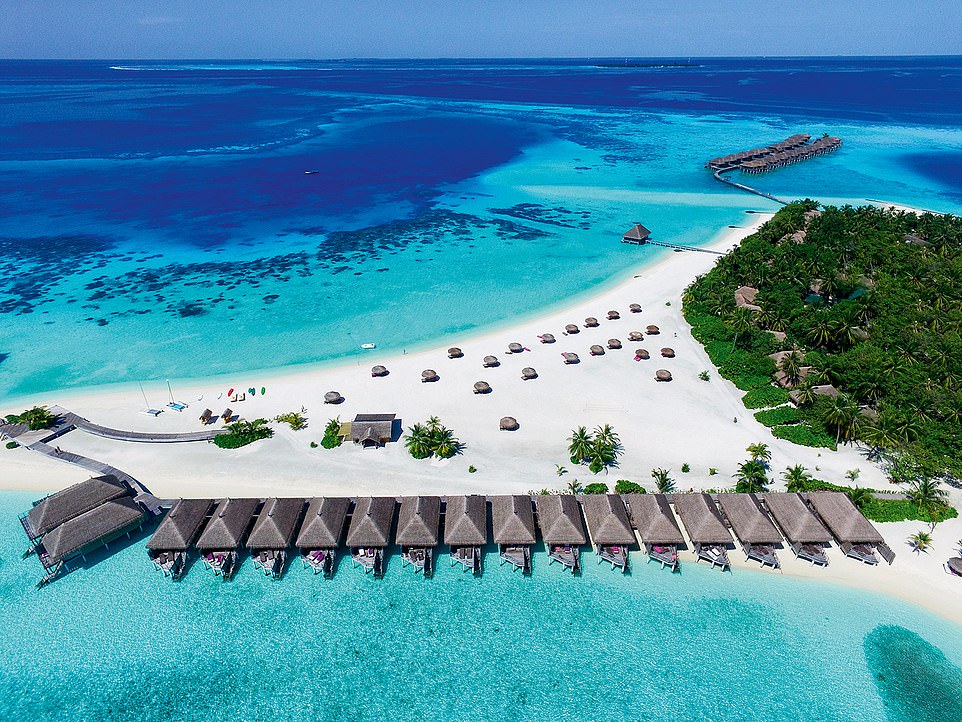 The Constance Moofushi on South Ari Atoll, pictured, has no less than 32 key dive sites within half an hour of its shores

On the west side of South Ari Atoll, Constance Moofushi has no less than 32 key dive sites within half an hour of its shores. It’s also on the migration route for manta rays, which can easily be seen from the beach or at one of the nearby feeding sites. There’s big game fishing on offer, a spa to relax in, or you can just hang out in the 80 lovely over-water or beach villas.

Here’s a deal: Seven nights all inclusive departing on selected dates in January from £3,599 pp, a 44 per cent saving (trailfinders.com). 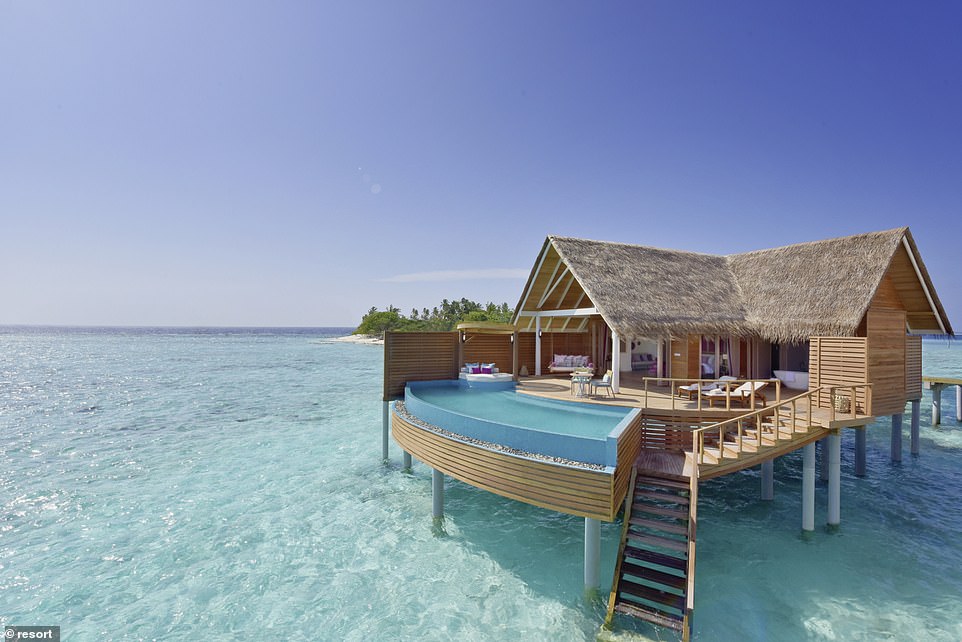 The 50 villas at Milaidhoo on Baa Atoll, pictured, come with private pools and some have egg-shaped baths overlooking the sea

Loved-up couples can say ‘I do’ on a dhoni or a tiny sandbank and have a star named after them at Milaidhoo on Baa Atoll. The tiny island (walk round it in 20 minutes) is home to 50 villas, all with private pools and outside day beds, some with egg-shaped baths overlooking the sea. No children under nine allowed.

Star turn: Sleep under the stars in a four-poster on a private sandbank after a sunset cruise and candlelit dinner (from £1,425 a night for two).

Here’s a deal: Seven nights half board with indirect flights in November from £4,398pp, saving 50 per cent on accommodation (kuoni.co.uk). 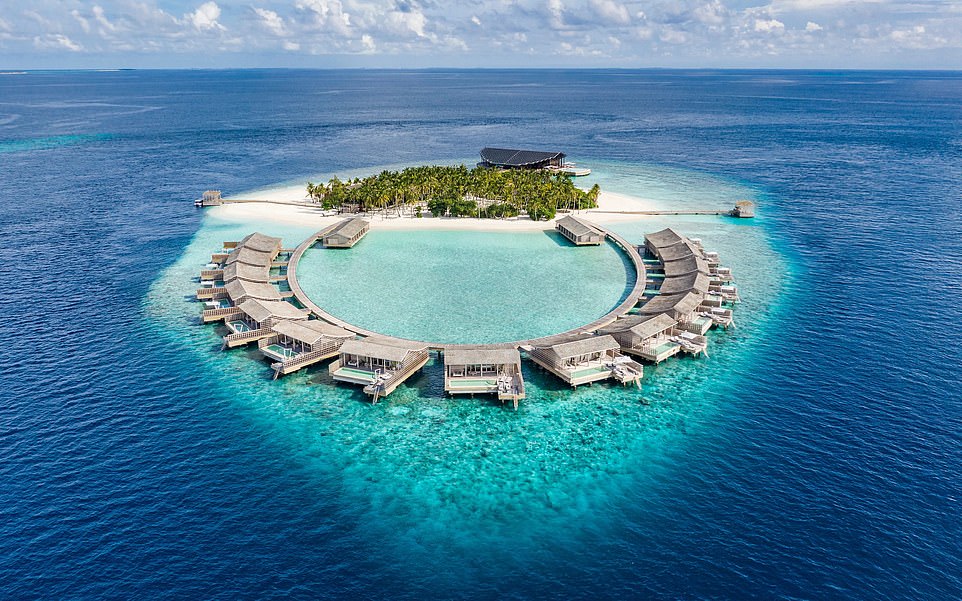 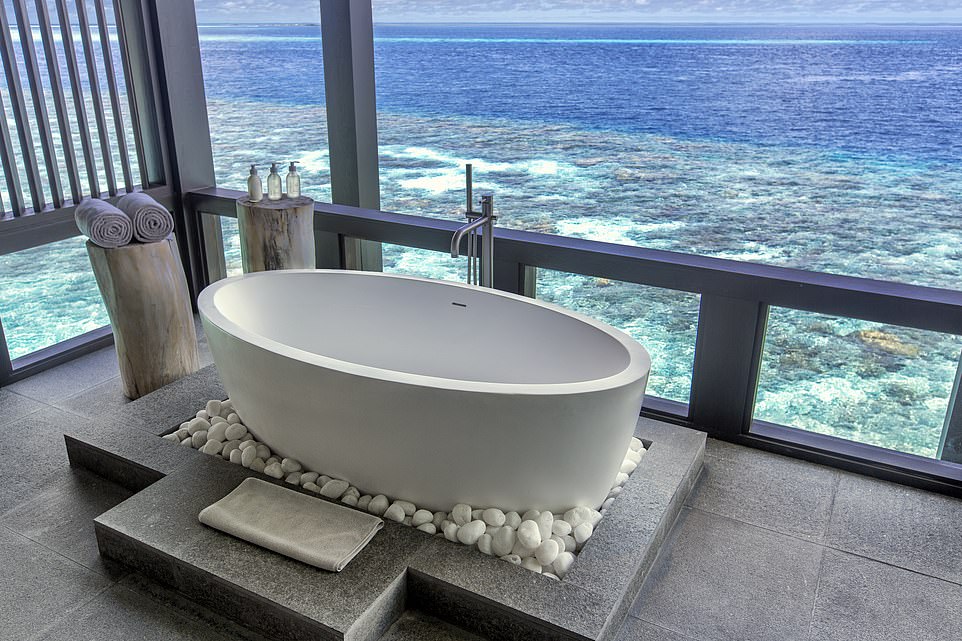 Inside one of the villas at Kudadoo. It has just 15 over-water villas and all come with private infinity pools

‘Anything. Anytime. Anywhere’ is the mantra at Kudadoo Maldives in the Lhaviyani Atoll, a 45-minute seaplane flight from Malé. Whether it’s spa treatments, sunset dolphin expeditions or round-the-clock champagne, nothing is limited or off-limits. The Maldives’ only fully solar-powered private island, Kudadoo has just 15 over-water villas with private infinity pools.

Here’s a deal: Seven nights all-inclusive on selected dates from £9,500pp when booked for November 30, saving 20 per cent on accommodation (kudadoo.com).

THE MALDIVES’ COVID RULES AND REGULATIONS

A negative PCR Covid-19 test taken not more than 96 hours before departure. Children under the age of one are exempt.

Fill out an online health declaration form (muga.immigration.gov.mv/ethd/create) no more than 24 hours before travel and include the Covid test results.

Make sure you booked direct BA flights because if you transit to the Maldives via a hub such as Dubai, Doha or Abu Dhabi, you’ll need to quarantine for 14 days on return to the UK.

While at the resort

Temperatures are checked at the airport. Masks must be worn while at the airport, during transfers and in enclosed public spaces in the resort. Daily temperature checks are recommended in resort, as is the use of the local contact tracing app. Gym and pool slots must be booked.

Tourists can leave their resorts on excursions and to visit other resorts and some other islands. Temperature check and questionnaire on departure from resort.

Facebook
Twitter
Pinterest
WhatsApp
Previous articleRonald Koeman is lucky to have Ansu Fati, Pedri AND a motivated Lionel Messi at his disposal
Next articleSongbird branded 'distasteful' as first look trailer for pandemic drama is released

Joe Biden says he will ask EVERYONE to wear a mask...

Grassroots suffers huge blow as £550m funding pushed back until next...