Ice sheets in Greenland and Antarctica are losing mass at the ‘worst case scenario’ rate predicted by the UN – and could result in sea levels rising by 16 inches by 2100.

According to a new study by the University of Leeds, if these rates continue, an additional 16 million people could be exposed to repeated annual flooding.

If levels rise by 16 inches over the next 80 years as predicted, there will also be a increase in the number of destructive storm surges, the researchers claim.

Mass loss from 2007 to 2017 due to melt-water and crumbling ice has matched Intergovernmental Panel for Climate Change’s (IPCC) most extreme forecasts.

There is a ‘clear mismatch’ between the observed reality of ice sheet disintegration and the models that are predicting what will happen in the future, the IPCC said. 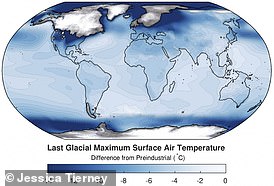 The average global temperature during the last Ice Age 20,000 years ago was 46°F

Researchers from the US combined data from tiny marine fossils with climate models to forecast the weather during the so-called Last Glacial Maximum (LGM).

During this chilly period, the Earth’s ice sheets and glaciers had spread to cover around half of Europe, North America and South America — and much of Asia.

According to the researchers, the difference in the average temperatures between the last Ice Age and now represents a ‘huge change’.

The findings will help experts understand the link between changes in atmospheric carbon levels and global temperature shifts — and predict future climate change.

A special IPCC report last year on the planet’s frozen regions allowed for only a small increase from Antarctica under the highest greenhouse gas emissions scenario.

Real world observations seem to show those models are no longer accurate as we’re already on target to surpass the worst predictions, the team explained.

‘Although we anticipated the ice sheets would lose increasing amounts of ice in response to the warming of the oceans and atmosphere, the rate at which they are melting has accelerated faster than we could have imagined,’ said Dr Slater.

‘We need to come up with a new worst-case scenario for the ice sheets because they are already melting at a rate in line with our current one,’ he added.

‘If we underestimate future sea level rise, then these measures may be inadequate and leave coastal communities vulnerable.’

Ice sheet losses at the upper end of the IPCC forecasts would by itself expose some 50 million people to annual coastal flooding worldwide by mid-century.

Total sea level rise of at least 3ft would likely require spending upward of £56 billion ($70bn) a year in sea walls and other defences against flooding, the IPCC said.

Several factors explain why the climate models underlying UN projections for sea level might have given short shrift to ice sheets, according to the new analysis.

Ice sheet models do well in describing the long-term impact of gradual global warming, which has seen temperatures at the poles rise far more quickly than for the planet as a whole.

But they have failed to account for short-term fluctuations in weather patterns that are, themselves, deeply influenced by climate change.

‘For Greenland, much of the ice loss is now being driven by surface melt events during hot summers – processes not captured in the AR5 simulations,’ said Slater, referring to the 2014 IPCC report, the fifth since 1992.

‘We needs to understand these better to improve our sea level rise predictions.’

Until the turn of the 21st century, the West Antarctic and Greenland ice sheets generally accumulated as much mass as they shed.

Runoff, in other words, was compensated by fresh snowfall – but that changed 20 years ago due to the gathering pace of global warming.

According to a new study by the University of Leeds, if these rates continue, an additional 16 million people could be exposed to repeated annual flooding

Last year, Greenland lost a record 532 billion tonnes of ice – the equivalent of six Olympic pools of cold, fresh water flowing into the Atlantic every second.

A new generation of climate models that better reflects how ice sheets, the oceans and the atmosphere interact will underpin the IPCC’s next major report, said Slater.

In another study published earlier this month in The Cryosphere, Slater and colleagues calculated that Earth’s ice masses – imountain glaciers, Arctic ice cap, and both ice sheets – lost nearly 28 trillion tonnes of mass between 1994 and 2017.

Less than half of that amount contributed to sea level rise. The Arctic ice cap, for example, forms in the ocean, and thus does not increase sea level when it melts.

The rate of ice loss, they found, has increased nearly 60 per cent of that time period. 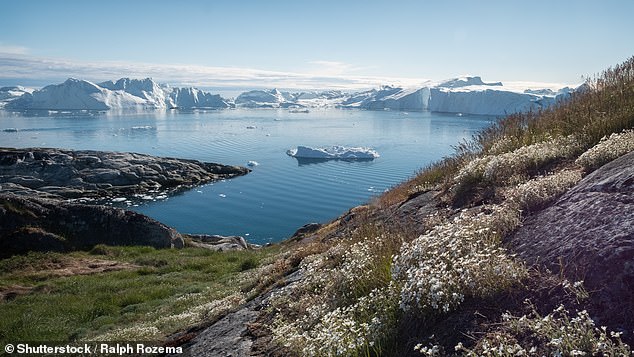 There is a ‘clear mismatch’ between the observed reality of ice sheet disintegration and the models that are predicting what will happen in the future, the IPCC said

So far, global sea levels have increased in the most part through a mechanism called thermal expansion, which means that volume of seawater expands as it gets warmer.

But in the last five years, ice melt from the ice sheets and mountain glaciers has overtaken global warming as the main cause of rising sea levels.

‘It is not only Antarctica and Greenland that are causing the water to rise. In recent years, thousands of smaller glaciers have begun to melt or disappear altogether, as we saw with the glacier Ok in Iceland, which was declared ‘dead’ in 2014,’ she said.

‘This means that melting of ice has now taken over as the main contributor of sea level rise.’

The findings have been published in the journal Nature Climate Change.

Global sea levels could rise as much as 1.2 metres (4 feet) by 2300 even if we meet the 2015 Paris climate goals, scientists have warned.

The long-term change will be driven by a thaw of ice from Greenland to Antarctica that is set to re-draw global coastlines.

Sea level rise threatens cities from Shanghai to London, to low-lying swathes of Florida or Bangladesh, and to entire nations such as the Maldives.

It is vital that we curb emissions as soon as possible to avoid an even greater rise, a German-led team of researchers said in a new report.

Targets set by the accords include cutting greenhouse gas emissions to net zero in the second half of this century.

In addition, water naturally expands as it warms above four degrees Celsius (39.2°F).

Every five years of delay beyond 2020 in peaking global emissions would mean an extra 20 centimetres (8 inches) of sea level rise by 2300.

‘Sea level is often communicated as a really slow process that you can’t do much about … but the next 30 years really matter,’ lead author Dr Matthias Mengel, of the Potsdam Institute for Climate Impact Research, in Potsdam, Germany, told Reuters.

None of the nearly 200 governments to sign the Paris Accords are on track to meet its pledges.