Mother is left terrified after posing for a selfie and spotting a mysterious reflection in her sunglasses – but can YOU spot what’s wrong?

A woman who posed for a selfie and spotted two mysterious figures in the reflection of her sunglasses has racked up hundreds of comments on a viral thread trying to identify what they might be.

Posting on Quora, Sara Medeiros, who lives in Massachusetts, told how she noticed the ‘unsettling’ shadows after taking a photograph of her new frames to send to her boyfriend.

The mother-of-three insisted she was home alone at the time the snap was taken and has been told by more than one spiritual medium that she has spirits and dark energy attached to her.

Sharing a close-up of the photo, Sara admitted she’s uncertain what the figures could be but the snap terrified her – sparking a debate over whether she had captured ghosts or a lighting glitch. 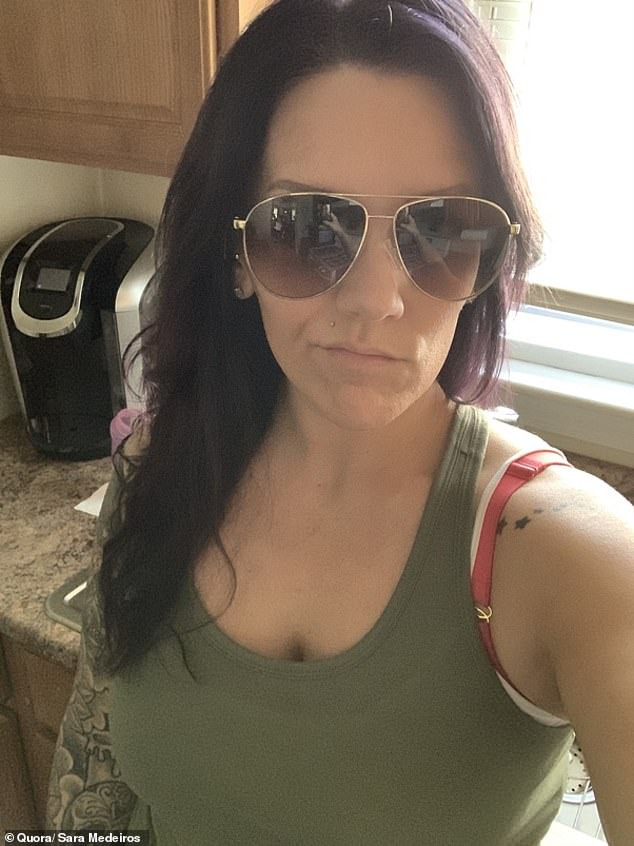 Sara Medeiros (pictured) who lives in Massachusetts, was flooded with explanations for a mysterious object in the reflection of her sunglasses after taking to Quora

Captioning her post: ‘What’s the scariest thing you’ve found in a photo after taking it?’, Sara wrote: ‘This was just taken over the summer, I had ordered some new sunglasses and needed an opinion before I committed to a pair. Don’t mind the RBF [resting b**** face], I just really hate taking pics lol.

‘So I sent the pic to my bf and while I was waiting for a response I started to study how the glasses looked on me. Didn’t take long before I noticed something in the reflection that didn’t belong there [sic].

‘I have three kids – 18, 14 and two. None were home on this day, I was alone. I’m standing in my kitchen, facing the dining room. Directly through the doorway is my black dining room table and four chairs. That’s what you should be seeing in the reflection on my glasses. Buuuut that’s not what I see.’

Sara tried to explain the mystery based on the previous encounters she’s had with spiritual advisers.

She continued: ‘I see two figures, a young boy standing on the left and a taller (kind of unsettling) figure on the right, side by side. Now I should mention that I believe in and am totally open to spirits/ghosts/entities and all that goes along with them. 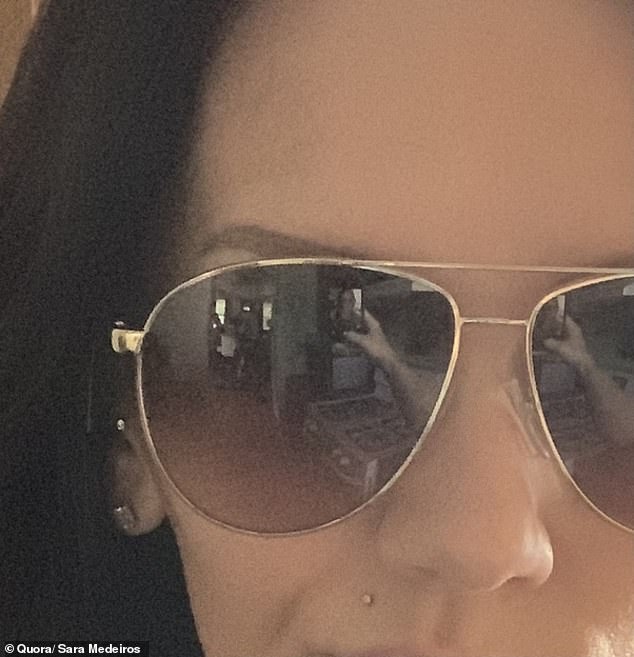 Mother-of-three Sara (pictured) said she was home alone, taking photographs to send to her boyfriend when she noticed strange figures lurking in the background 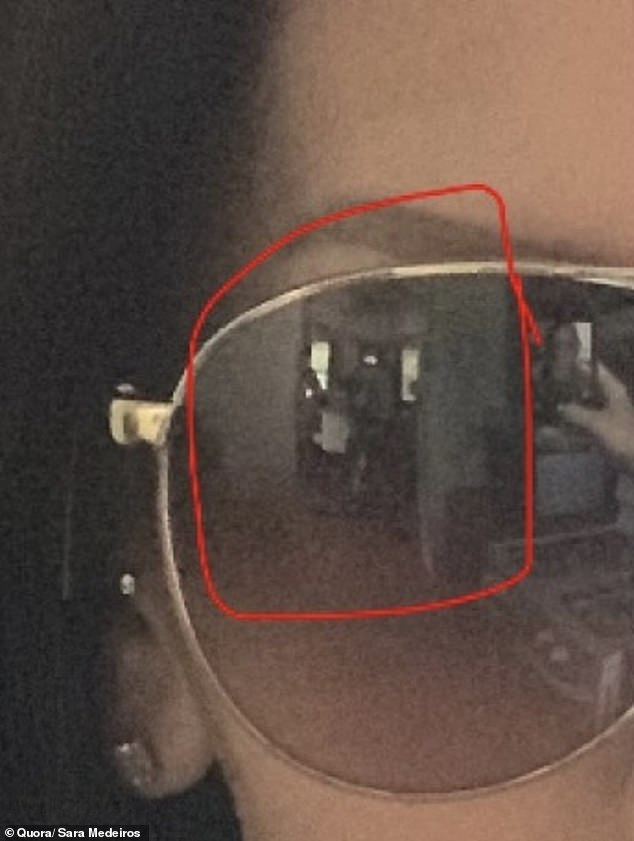 Sara (pictured) who claims to have been told spirits are ‘attached’ to her, admitted the mysterious figures in the photograph frightened her

‘I’ve tried to blame the houses I was living in but that dark energy and all its shadows and nightmares have followed me, so apparently it is attached to me not the houses. Anyway, I’m not sure if that’s what’s being reflected in the glasses but seeing whatever it is as clearly as I do, sure scared the s*** out of me.’

A stream of responses agreed they could see something spooky in the snap and urged Sara to visit someone who can make the ‘entities’ go away.

One person wrote: ‘You definitely have a dark entity there. No doubt. You can see the eyes and it has ears that are kind of pointy. I can’t tell but if you zoom in on the kid, it looks like there is an arm coming down to him on the left. Could be three entities there. The dark one you really need to worry about.’

‘WTF! That scared the c*** out of me and I’m just looking at the picture. I literally jumped back when I saw that… so scary,’ another said.

Others argued the mystery in the reflection could be explained by the angle the photo was taken or by the lighting.

‘People see what they want to see. I can’t see what you see. It’s just reflections/light effects. Sometimes the simplest explanations are the best!’ wrote one.

Another said: ‘Please don’t listen to “psychic mediums” or be “open to ghosts”. It is the 21st century. If they were legit, these mediums would be publishing in scientific journals. You are likely more likely to spot an alien than you are to spot a ghost.’

Equally skeptical, a third added: ‘Interesting story but I think we see what we want to see or what we might fear to see. That picture is just the reflection of light or distorted images taken in the frame – nothing else.’

President Donald Trump said Monday that he is fighting his increasingly desperate effort to remain in office by finding a way to overturn...
Read more
U.S

Ryan Seacrest is about to make a quick $46M, that is if he gets full price for his impressive California mega mansion.On Monday...
Read more
U.S

Tuscany alive and well in California! Villa on a 12.5-acre estate hits market for $19.8million

A stunning villa in Carpinteria, California with a vineyard, horse stables and other stunning amenities is being listed for sale by the Ebbin...
Read more

President Donald Trump said Monday that he is fighting his increasingly desperate effort to remain in office by finding a way to overturn...
Read more

Ivanka Trump, 39, is known for her stylish wardrobe and her love for designer brands. Recently, she has been seen re-wearing outfits, like...
Read more

Dementia is an umbrella term for groups of symptoms that surface as a result of progressive brain decline. Much is still to be...
Read more

Ryan Seacrest is about to make a quick $46M, that is if he gets full price for his impressive California mega mansion.On Monday...
Read more
Load more

Donald Trump tries to whip up his base claiming 'I'm NOT...