A group of Canadian students used ham radio technology to have a once-in-a-lifetime conversation with a crew member aboard the International Space Station.

Young members of the Airdrie Space Science Club in Alberta connected with NASA astronaut Chris Cassidy, who was conducting experiments aboard the ISS some 240 miles above Earth’s surface.

The students, who ranged in age from 10 to 13, peppered Cassidy with a variety of questions, from what liftoff feels like to what happens if an astronaut vomits in space.

Though the ongoing coronavirus pandemic meant schools were closed, a special relay signal allowed the children to dial in from home. 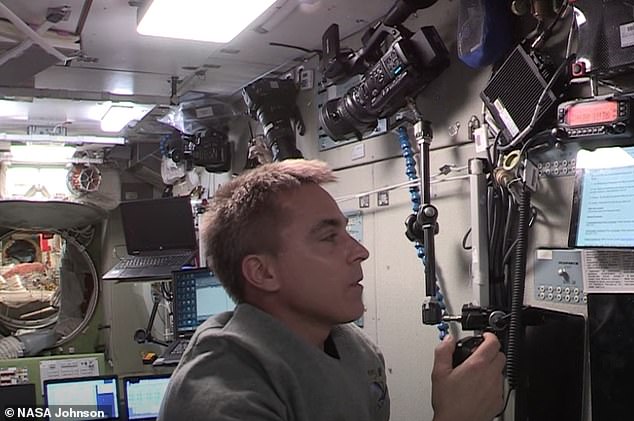 On May 15, young members of the Airdrie Space Science Club in Alberta used a ham radio to connect with NASA astronaut Chris Cassidy (pictured), who was conducting experiments aboard the ISS

Taking turns, they asked Cassidy about everything from the impact of COVID-19 on the International Space Station (ISS) to what the station smells like to what his first meal would be back on Earth.

Cassidy said the crew is more worried about their loved ones on the ground during the pandemic.

He also answered that the ISS smells like an old house and the first meal he will have when he gets back ‘is something out of the oven.’

One student took a different, more daring route with a question – ‘what happens when an astronaut throws up?’

The students, who ranged in age from 10 to 13, peppered Cassidy with questions, from what liftoff feels like to what happens if an astronaut vomits in space. Because the pandemic shut their school down, a radio relay was used so they could each connect from home via telephone

And one student asked what happens when an astronaut throws up.

‘We bring special bags if you feel the urge to go,’ Cassidy patiently explained.

‘If you didn’t make it to the bag, it would go all over and make a real mess.’

Brian Jackson, a teacher at CW Perry Middle School, started the club to inspire children to learn more about astronomy.

Launched in 2000, the Amateur Radio on the International Space Station (ARISS) program connects students like his with space station crew via amateur radio communications.

Since the program debuted, its connected more than 250,000 students in 57 countries to astronauts on the ISS. 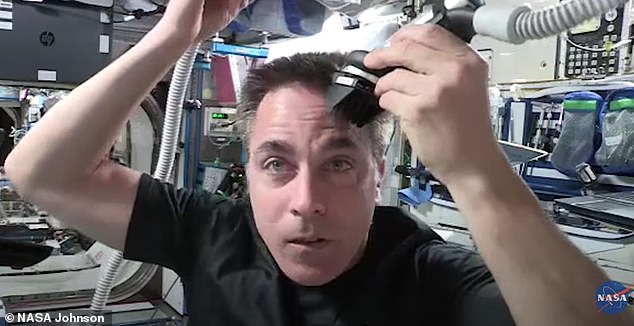 Cassidy giving himself a haircut aboard the space station. Since 2000, the Amateur Radio on the International Space Station program has connected more than 250,000 students to astronauts on the ISS.

Normally Jackson’s young mentees would gather at the school to make contact.

With pandemic lockdowns in effect, though, each logged in from home via telephone.

An adapted telebridge relayed their voice signals to the ISS via a ham radio operator near Johannesburg, South Africa. 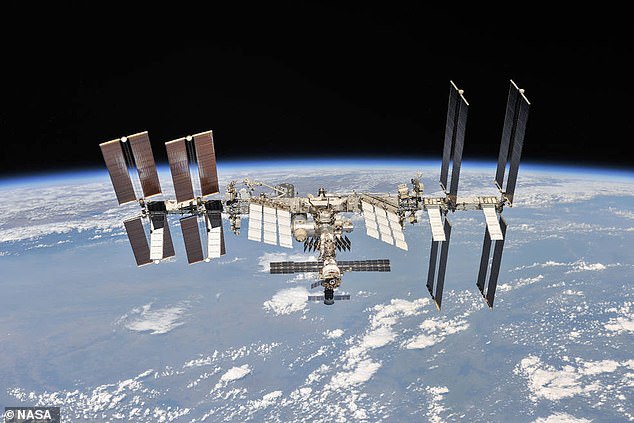 There have been ham radios aboard the Space Shuttle, Mir Space Station, and the International Space Station.  Any licensed operator can communicate with the ISS, which publishes its frequencies online

It was only the second test of the system.

‘During this pandemic, our opportunities to develop kids’ interest in space have been interrupted,’ said Jackson, who is also chair of the Radio Amateurs of Canada youth education program.

‘This ARISS contact gets them looking back up, towards the sky, and imagining themselves as an astronaut one day.’

Astronaut Owen Garriott, an amateur radio operator for over 40 years, brought the first ham radio into space in 1983, aboard the Space Shuttle Columbia.

His conversation – with his mom, US senator Barry Goldwater and Jordan’s King Hussein – marked the first communication between astronauts and people on the ground outside of official channels.

A student asked NASA commander Chris Cassidy about throwing up in the space station. Ham radio operators can only get through to the station when its  directly overhead, a small window of time

Since then, the Space Shuttle, Mir Space Station, and the ISS have all had ham radios on board.

A typical ground station for contacting the ISS station includes a six-foot FM transceiver and 25-100 watts of output power.

Of course, you can only get through when the station is almost directly overhead, a tall order given that it moves almost five miles per second.

There also has to be an astronaut with free time to answer your call.

In 2015, an amateur operator in Gloucester, England, spoke with got ahold of space station crewmembers from his garden shed and spoke with them for almost a minute.

In May, an operator in Gujarat, India, announced he connected with astronauts Bob Behnken and Doug Hurley aboard SpaceX’s Crew Dragon as they made their maiden voyage to the ISS.

But NASA insisted his claim was untrue.

‘We did check with SpaceX to confirm that they were not aware of any communication with the astronauts via ham radio, and the crew did not report having received communication,’ an agency spokesperson told Popular Mechanics.

‘We are also under the impression that may be technically impossible for the Crew Dragon to communicate through ham radio.’

There are more than 1.5 million licensed hams worldwide, according to NASA, including more than 400,000 in America alone.

The term ‘ham’ comes from the initials of three early amateur operators – Albert Hyman, Bob Almy and Poogie Murray – members of the Harvard Radio Club at the turn of the 20th century.