Drones all in a spin! AI algorithm enables quadcopters to perform acrobatic manoeuvres like power loops and barrel rolls autonomously

Scientists have developed a quadrotor helicopter, or quadcopter, that can learn to fly acrobatic manoeuvres that would challenge even a human operator.

The drone, developed with US tech giant Intel, uses a navigation algorithm that allows it to autonomously perform tricks using on-board sensor measurements.

In demonstrations, researchers flew power loops, barrel rolls and matty flips, during which the drone was subject to high thrust and extreme angular acceleration.

A drone with the ability to perform tricky stunts will be more efficient in conventional operations, the research team say.

It can be pushed to its physical limits, make full use of its agility and speed and cover more distance within its battery life.

The algorithm behind the drone could be used in the physical world for real-life rescue missions or for delivery services. 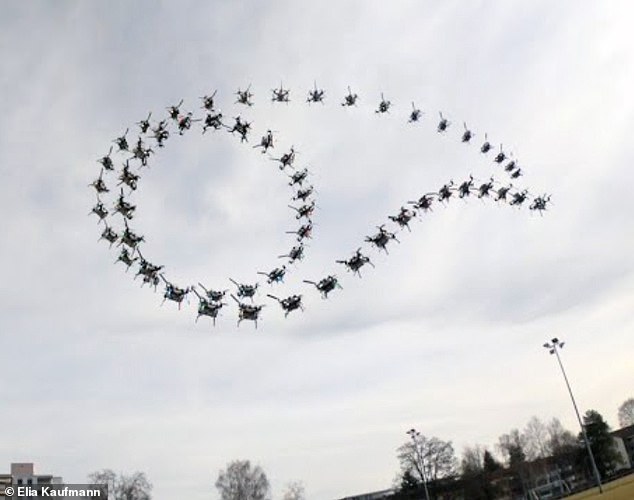 In a commercial setting, delivery drones that can confidently perform fast tricks and stunts could get to their destination faster by avoiding potential obstacles.

‘This navigation is another step towards integrating autonomous drones in our daily lives,’ said Davide Scaramuzza, robotics professor and head of the robotics and perception group at the University of Zurich.

‘Our algorithm learns how to perform acrobatic manoeuvres that are challenging even for the best human pilots.’

Since the dawn of flight pilots have used acrobatic manoeuvres to test the limits of their aeroplanes, and the same goes for drones. 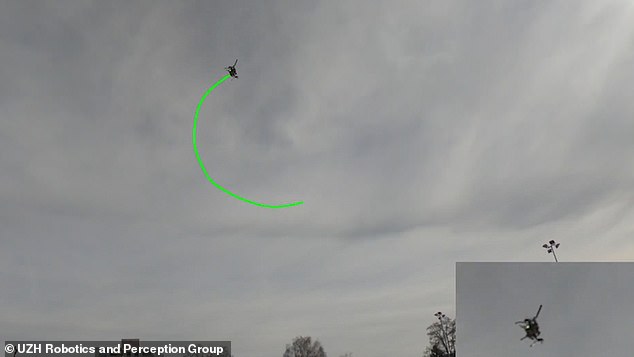 However, performing acrobatic manoeuvres with quadcopters is extremely challenging and human drone pilots require many years of practice to do it safely, without harming the hardware, themselves or other people.

The harsh requirements of fast and precise control at high speeds make it difficult to tune controllers, since even tiny mistakes can result in ‘catastrophic outcomes’.

The research team say they’ve overcome these risks by letting the drone conduct its own training procedures.

At the core of the algorithm lies an artificial neural network that combines input from the on-board camera and sensors and translates this information directly into control commands.

The neural network is trained through simulated versions of the acrobatic manoeuvres, which cuts out the need for expensive demonstrations by a human pilot and the risk of damage to the quadcopter.

Only a few hours of simulation training are enough and the quadcopter is ready for use, without requiring additional fine-tuning with data.

The algorithm uses abstraction of the sensory input from the simulations and transfers it to the physical world.

The approach can be used for a large number of diverse manoeuvres, including those that have only been performed by the very best human pilots, the team claim. 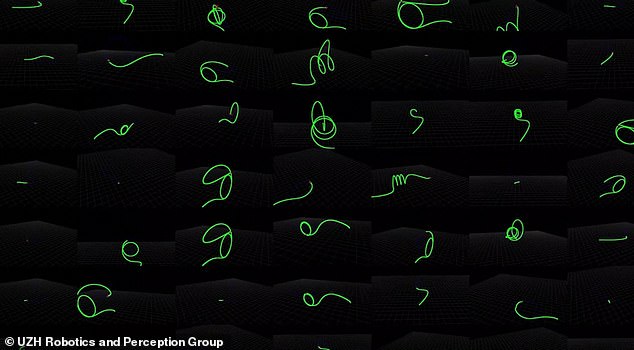 Green lines indicate the various trajectories performed by the drone. Sceintists say their approach is the first to enable an autonomous flying machine to perform a wide range of acrobatics manoeuvres that are highly challenging even for expert human pilots

However, the researchers acknowledge that human pilots are still better than autonomous drones.

‘Human pilots can quickly process unexpected situations and changes in the surroundings, and are faster to adjust,’ said Scaramuzza.

But drones used for search and rescue missions or for delivery services will benefit from being able to cover long distances quickly and efficiently.

Therefore acrobatic manoeuvres could help a speedy change of direction to return to base for another pick-up, or if its journey is recalculated.

Delivery firms are pioneering a host of new technologies to tackle the last mile of deliveries.

It is hoped the vehicles can cut the inefficiencies, and hence costs, of the final stage of delivery, in which packages are taken from a central hub to your door.

Amazon envisions making last mile deliveries with an army of autonomous drones that drop packages on your doorstep.

Amazon has billed the service ‘Prime Air’ and claims the drones will increase the overall safety and efficiency of its transport system. 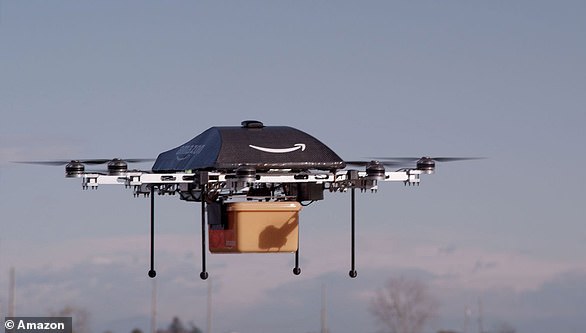 Amazon envisions making last mile deliveries with an army of autonomous drones (pictured) that drop packages on your doorstep. It has billed the service ‘Prime Air’

Just one pilot could oversee several of the drones at once, meaning the firm could someday pay fewer people to make the same number of deliveries.

Each six-wheeled ‘ground drone’ is almost completely self-driving, and is constantly connected to the internet, using GPS to find its destination.

Walking on the pavement at about 4mph (3km/h), robots can complete local deliveries within five to 30 minutes from a local hub or retail outlet.

Self-driving cars are another last mile option being considered by some delivery companies. 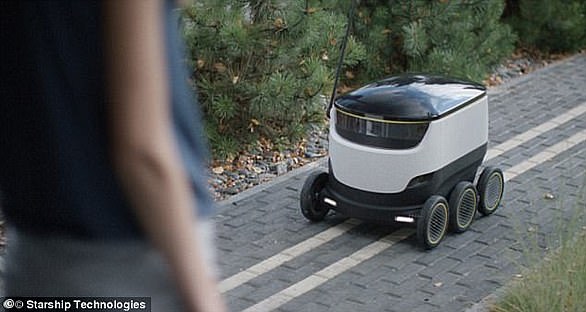 Supermarket operator Kroger is testing a fleet of self-driving grocery cars that can carry as many as ten bags of shopping to your door.

Customers can order groceries via Kroger’s website or mobile app and select same-day or next-day delivery.

Customers who take advantage of Kroger’s driverless grocery delivery system will still have to walk to the curb outside their house to retrieve the groceries.

Texas on track for driest conditions of the last 1,000 YEARS due to climate change

Draw a picture of summer, and you may become a KidsPost...