Lather up! A new AI- surveillance system promises to evaluate how well people wash their hands in public restrooms in Japan

A Japanese technology company wants to take the guesswork out of proper handwashing technique with a new sink-mounted surveillance system that will flag people for rushing or not using enough soap.

Called ‘Actlyzer,’ the AI-driven ‘hand wash movement recognition’ system was developed by Fujitsu Laboratories and is being targeted for use in the Japanese food services industry, where employee cleanliness inspections are common.

Fujitsu also believes the ‘Actlyzer’ system could also be used in hospitals, schools, hotels, stadiums, and any other public venue where large numbers of people might share a restroom. 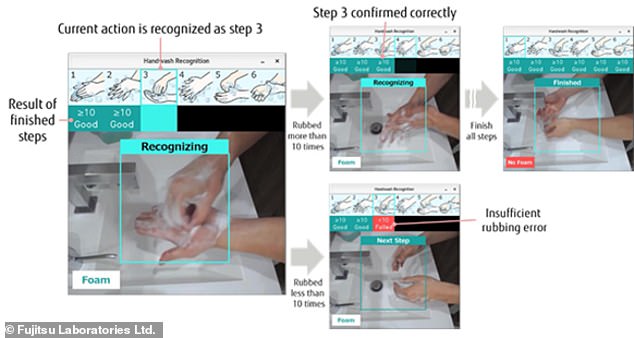 As the COVID-19 pandemic has brought new attention to safe handwashing practices, the company believes ‘Actlyzer’ could be an important part of a larger public safety campaign to lessen the spread of disease.

‘Hand-washing will become even more essential in the days and months to come,’ a Fujitsu spokesperson told The Asahi Shimbun.

‘There will be demand for our technology in a variety of situations.’

The system relies on overhead or side-mounted cameras placed around the sinks in public restrooms and will provide feedback on how effective a person’s technique is on a nearby display.

If a person is washing their hands properly,’OK’ will appear in green lettering, and if they’re doing a poor job ‘NG’ will be displayed in red lettering, indicating ‘No Good.’

According to Fujitsu, ‘Actlyzer’ can recognize over 2,000 particular handwashing gestures with an accuracy rating of more than 90%.

The system uses the six basic steps for proper handwashing described by the Japanese Ministry of Health, Labour and Welfare. 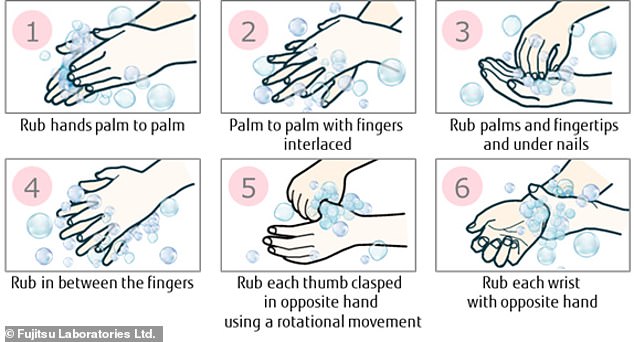 For each step, the system will evaluate whether there is an adequate amount of soap lather and whether the person washing rubs or scrubs at least 10 times per step.

No current partners have been announced, but Fujitsu says it’s planning field trials to demonstrate the system’s effectiveness to potential clients.