New book Lido: A Dip into Outdoor Swimming Pools makes a splash with examples from London to Sydney

This is certainly a great book to plunge into.

Lido: A Dip into Outdoor Swimming Pools by author Christopher Beanland showcases the world’s best lidos, from a spaceship-like pool in Hong Kong to Icebergs – a pool full of ‘frothy surf’ in Sydney.

As well as presenting the best places for an alfresco dip, the book also delves into the history and design of outdoor swimming spots and explores why people love to swim.

Explaining what swimming means to him, Christopher writes: ‘To swim is to be reborn. Each dive into the water is a leap of faith. Each stroke draws you closer to some nebulous goal. Each breath reinforces your sense of sentient humanity.

‘Swimming produces a new swimmer – a fresher, healthier, stronger, mentally cleansed version of the person who arrived with a head full of thoughts but will leave with only one: “It’s time to eat cake.”‘

Here MailOnline Travel presents ten of the top pools included in the tome. Dive on down… 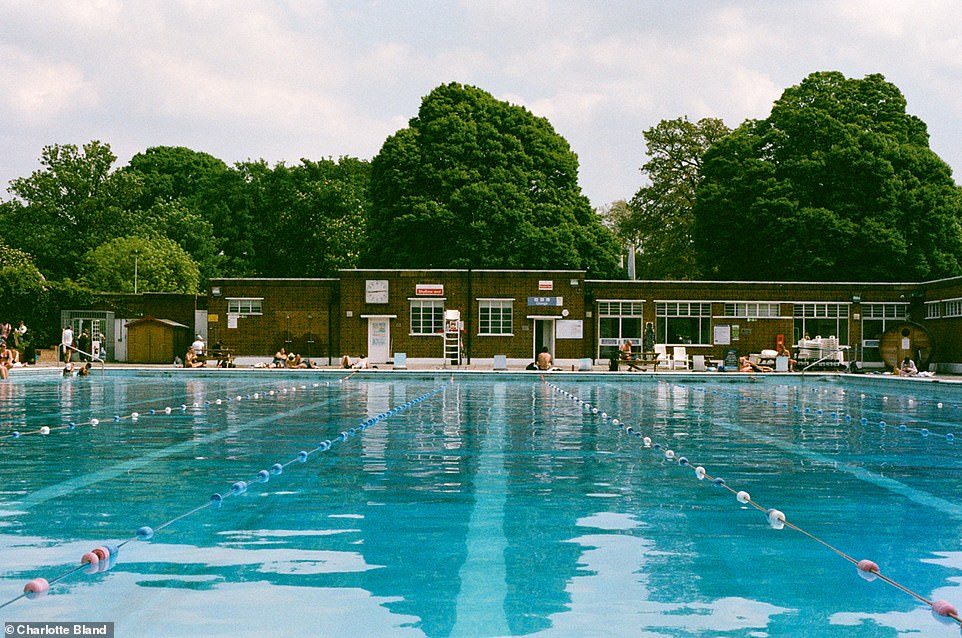 BROCKWELL LIDO, HERNE HILL, LONDON: Christopher notes that Brockwell Lido, which opened in 1937, was the star of a BBC documentary in 1995 which ‘was one of the first instances of the lido renaissance being documented’. He adds that the pool also acted as the setting for Libby Page’s 2018 smash-hit novel, The Lido, which tugs at reader’s heartstrings with ‘its tale of love, loss and the lido fighting against closure’. In reality, the avid swimmer says the pool is ‘packed with people’ during the summer months and the cafe is a ‘popular destination’. The pool is run by ex-council workers Casey McGlue and Paddy Castledine, who are ‘revered as local heroes’ 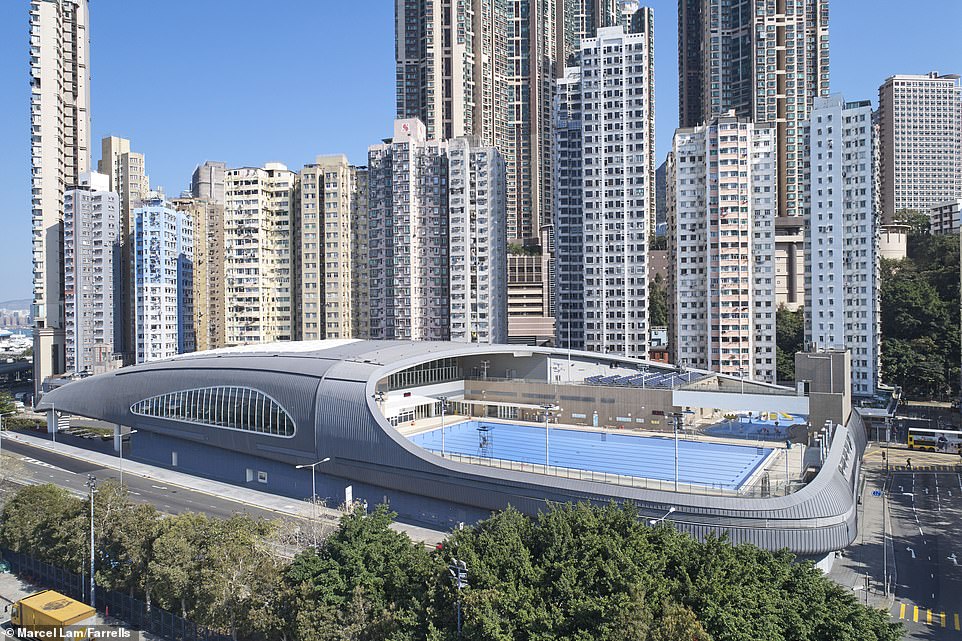 KENNEDY TOWN SWIMMING POOL, HONG KONG: This amazing zinc-clad pool was designed by British architect Terry Farrell and offers city-dwellers ‘an elevating experience (literally)… panoramic views up the hills and over the harbour and respite from the incessant office life, political turbulence and cramped flats that dominate existence here’ 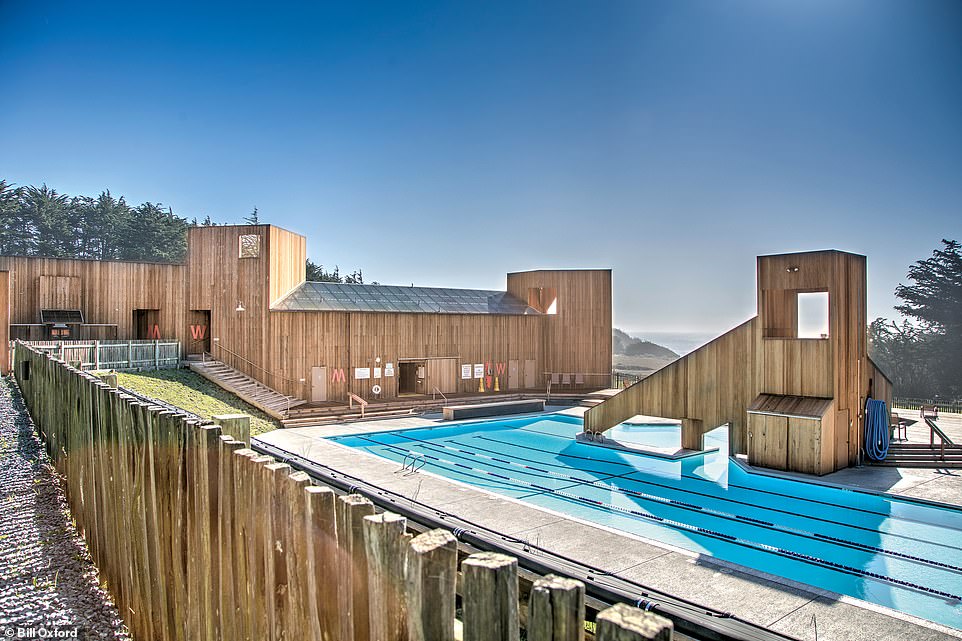 OHLSON RECREATION CENTER, SEA RANCH, CALIFORNIA: This pool is located on the Californian coast halfway up Highway 1 between San Francisco and Mendocino. Christopher writes: ‘The wooden buildings and bold shapes are modern yet somehow also aware of the environment. The Sea Ranch has a cultish, intellectual vibe; its architecture is also brainy. The pool by Moore Lyndon Turnbull Whitaker of Berkeley sets an almost brutalist aesthetic against pale blue. The whole ensemble was built as a sheltering system from the Pacific winds’ 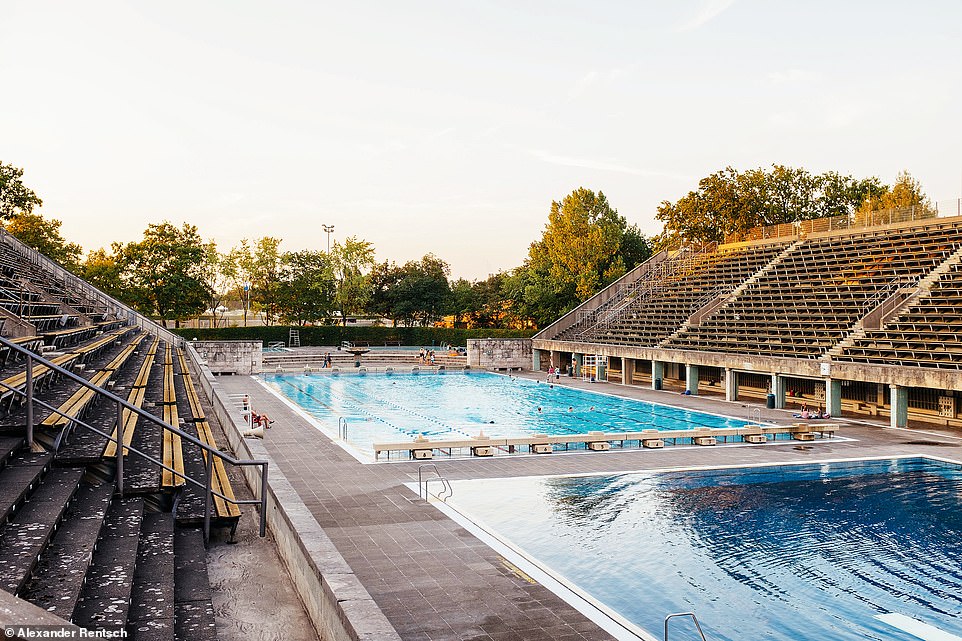 OLYMPIA SCHWIMMSTADION, BERLIN, GERMANY: The Schwimmstadion is the work of German architect Werner March and was built for the 1936 Olympic Games, which was hosted by Adolf Hitler. Christopher says it is ‘as overblown and frankly terrifying’ as the Olympic stadium it abuts’. He adds: ‘Coated in limestone, it forms the northern axis of the sprawling Olympic site… It is a strange place perhaps for a summer swim, but as with Tempelhof Airport, Berlin has decided to make the best of a past that went horribly wrong and instead provide a place where locals can cool off’ 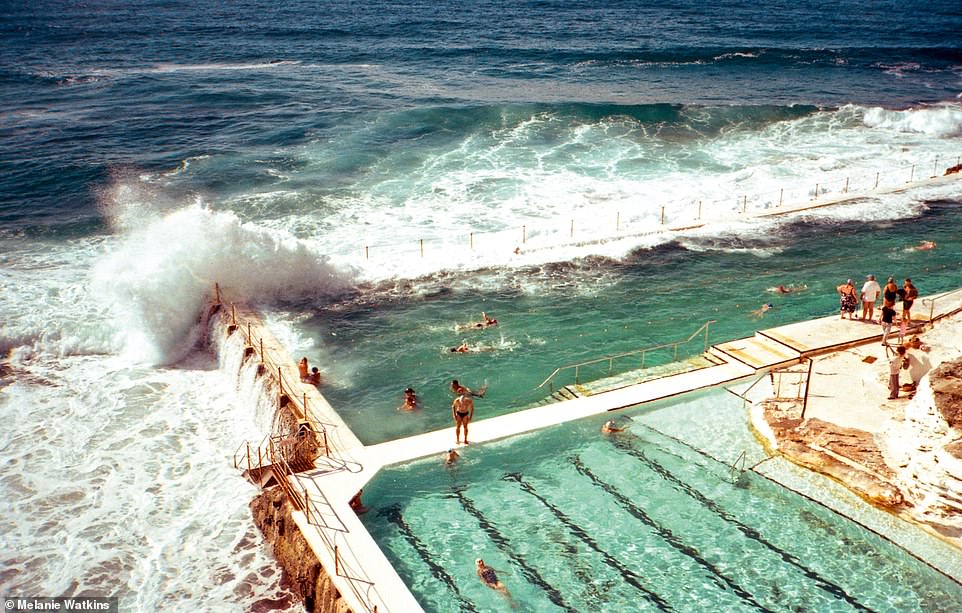 ICEBERGS, BONDI, SYDNEY, AUSTRALIA: Christopher says this is one of the world’s most popular outdoor pools. He says of the swimming spot: ‘Star of a million Instagram photos, Icebergs pokes tantalisingly out into the ocean, begging for a pic. When the frothy surf smashes over the pool walls, the striking visual effect is heightened.’ He says because of the pool’s popularity, it can seem ‘a bit stressful at times’. The author adds that for a post-swim pick-me-up, the restaurant on the top floor serves a ‘great brunch’, and ‘the people running the show up there are golden’ 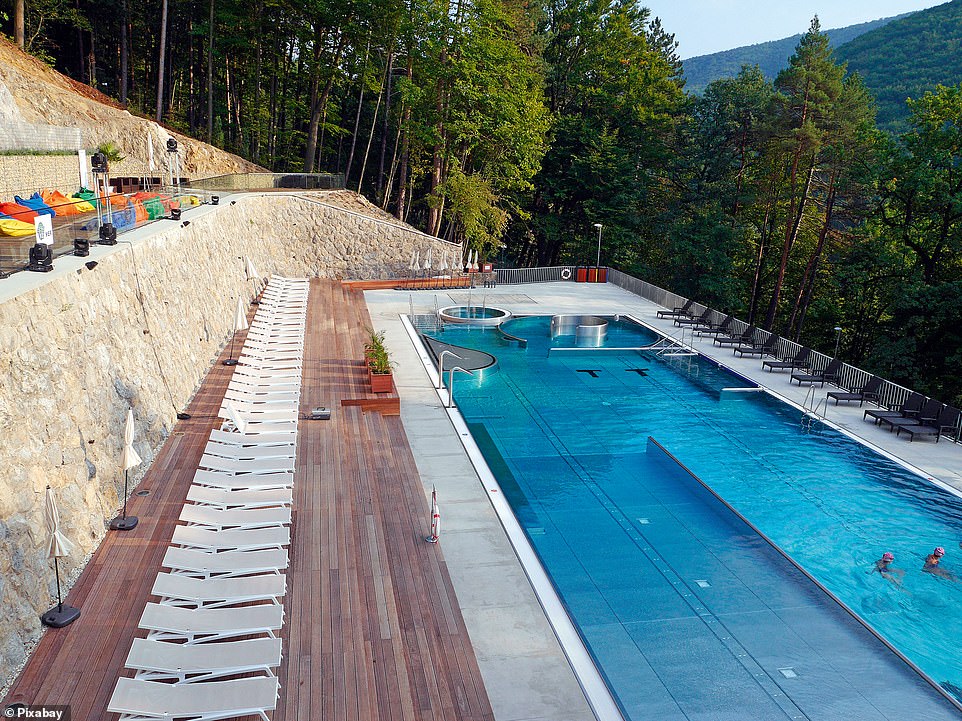 ZELENÁ ŽABA, SLOVAKIA:  Zelená Žaba – which means ‘green frog’ – was the work of Czech architect Bohuslav Fuchs. Christopher says that the designer was ‘a little known but important force in the functionalist movement that brought a freshness and robustness to modernism in the 1930s’. The swimming pool, located at a spa resort in the hills, features ‘spiral staircases’ and ‘the changing room block peering down the hill at the pool is as pretty as a picture’. It was renovated in 2015 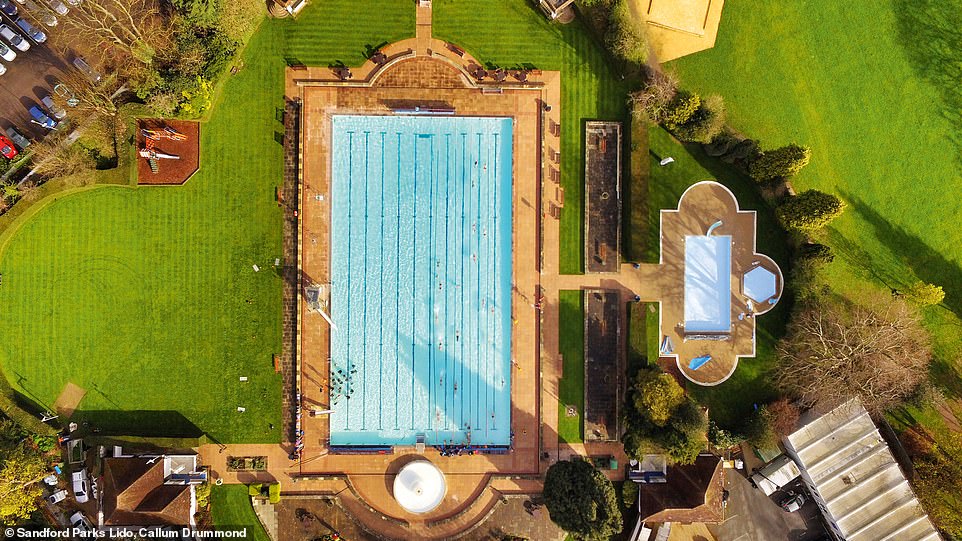 SANDFORD PARKS LIDO, CHELTENHAM: Christopher says that Sandford Parks Lido is the ‘pride of the spa town’. He says: ‘Some lidos can feel rather hemmed in, with brick walls encasing the place and sunbathing space at a premium, but Sandford Parks is spacious, with long lawns, benches and picnicking places aplenty.’ There is a children’s pool next to the main pool and both were constructed in 1935 with ‘art deco architecture around the edge’ 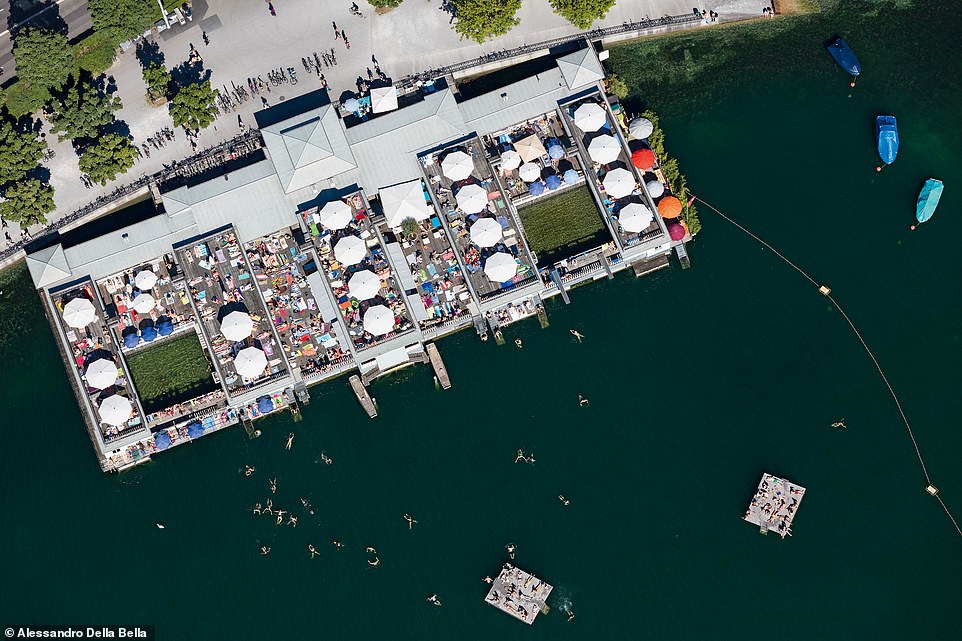 SEEBAD UTOQUAI, ZURICH, SWITZERLAND: ‘Lake baths,’ writes Christopher, ‘fulfil the typically Swiss need for something that feels as close to a beach and as close to the sea as you’ll get in a landlocked country’. Seebad Utoquai is a popular example of one, featuring ‘historic bathing buildings clustered hard against the water’s edge’. Just a short stroll away is the Pavilion Le Corbusier, noted as an ‘added attraction for architecture fans’ as it’s the Swiss architect’s final work, completed posthumously in 1967 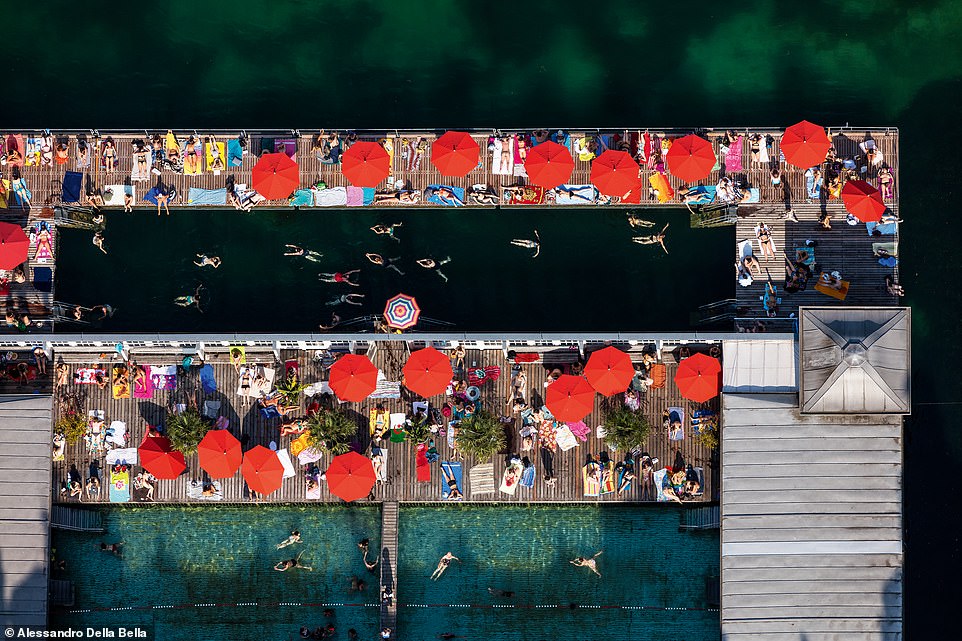 FRAUENBAD STADTHAUSQUAI, ZURICH, SWITZERLAND: This bath was built in 1888 for, and is still exclusively used by, women. Londoner Rebecca Armstrong, who was interviewed for Christopher’s book, says one of her favourite things bout outdoor pools in general is ‘the sky!’. She adds: ‘Seeing the light change as I swim, seeing birds flying overhead… I love how the view changes through the year, from the bony fingers of winter trees visible with lost kites in their clutches, to the rose-gold late afternoon sun spilling across the water in the summer’ 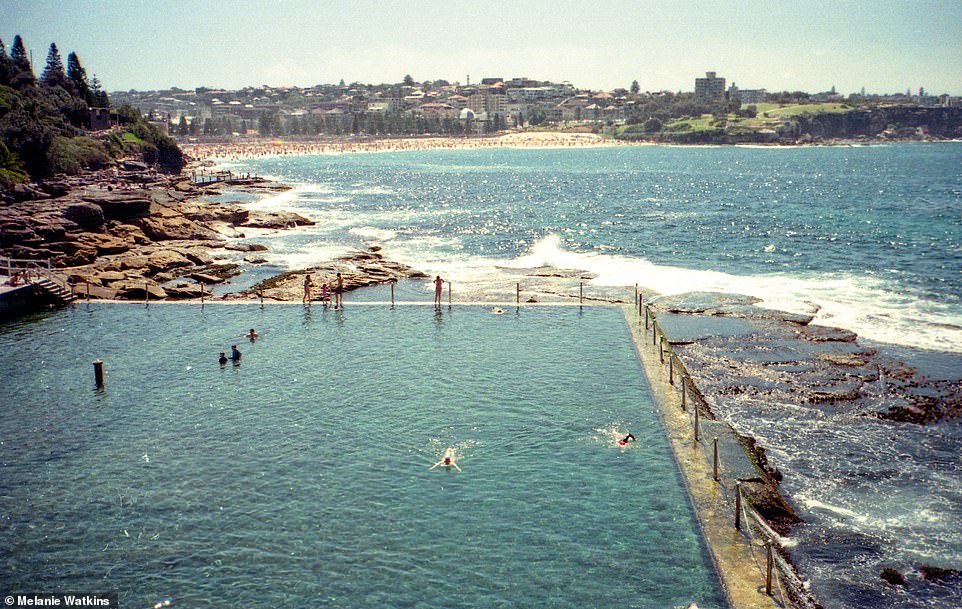 WYLIE’S BATHS, COOGEE, AUSTRALIA: Wylie’s Baths is a heritage-listed tidal swimming pool in the eastern suburbs of Sydney. Christopher says of the spot: ‘Wylie’s is a private, family-run joint that will warm the cockles. From the retro lettering of its sign that makes you think of Dirty Dancing summer camps, to the bowls of sea anemones dredged from the pool, which you’re welcome to take home and feast on, it’s a peach.’ There is also a cafe on the site which serves up ‘mean bacon sandwiches’

As the nights draw in, Britain lights up and it's time to… go with the GLOW!

Great British boltholes: A review of The Pheasant Inn in Berkshire

Anyone for a spot of island hopping? The wonderful ways to enjoy a fun day out on the water

Anyone for a spot of island hopping? From hovercraft day trips...
Read more

Craig David net worth: Fill Me In & 7 Days singer has eye-watering sum in bank

Mary J Blige is most likely to be known for her musical talents, having forged a successful career with the industry. She is...
Read more

Anton Du Beke wife: When did Anton and wife Hannah get married?

During an interview with The Independent, he said: "I sort of sprung it on her. I don't know why, I just had this...
Read more

Anton Du Beke wife: When did Anton and wife Hannah get...