New claims for U.S. unemployment benefits have risen for the first time in over a month, as coronavirus cases rise across the country and many states move to impose new restrictions.

For the week ending November 14, 742,000 people filed initial claims for jobless benefits, up from a revised 711,000 the prior week and exceeding analyst expectations.

Claims had soared to 6.9 million a week in March when the pandemic first intensified. Before the pandemic, applications typically hovered about 225,000 a week.

The U.S. death toll from COVID-19 surpassed a grim new milestone of 250,000 on Wednesday as New York City’s schools called a halt to in-classroom instruction, the latest in restrictions to curb the spread of the virus. 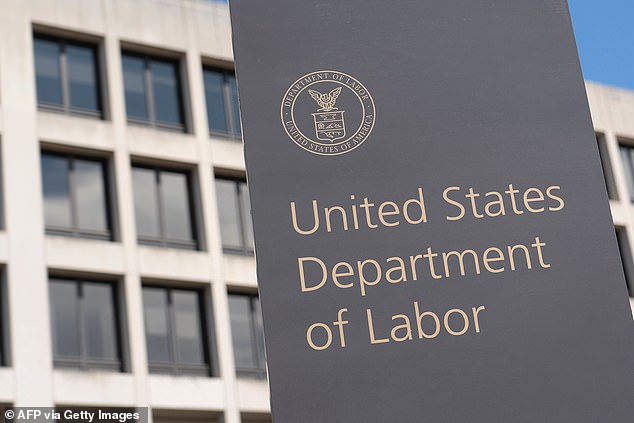 For the week ending November 14, 742,000 people filed initial claims for jobless benefits, according to data released by the Department of Labor on Thursday (file photo)

The number of people who are continuing to receive traditional unemployment benefits fell to 6.4 million, the government said, from 6.8 million.

While some of them found jobs and moved off benefits, many others simply used up their state unemployment aid – which typically expires after six months – and have transitioned to a federal extended benefits program that lasts 13 more weeks.

The economy’s modest recovery is increasingly at risk, with newly confirmed daily infections in the United States having exploded 80 percent over the past two weeks to the highest levels on record.

More states and cities are issuing mask mandates, limiting the size of gatherings, restricting restaurant dining, closing gyms or reducing the hours and capacity of bars, stores and other businesses. At least 15 states have tightened curbs on businesses to try to slow infections.

In Kentucky, new restrictions imposed on Wednesday by Governor Andy Beshear, a Democrat, shut down indoor dining and bars until at least December 13.

The worsening viral outbreak coincides with the impending expiration of two federal unemployment programs at year’s end that could eliminate benefits for 9.1 million people, according to a report from The Century Foundation.

The looming expiration would spark the most substantial reduction to unemployment benefits since the end of July, when a $600 weekly supplement – also added as part of the CARES Act – expired. And with coronavirus infections surging, some economists caution that job losses could rise during the winter, increasing the need for support.

Data released by the Labor Department last week showed the majority of people receiving unemployment benefits are now participating through pandemic-related programs created as part of the legislation passed by Congress in March.

Meanwhile, the number of people receiving regular unemployment benefits is declining as people facing long stretches of joblessness exhaust their state benefits and move on to pandemic programs.

If nothing changes, more than 13 million people are at risk of seeing their benefits end, potentially leaving them with less money to pay the rent, buy groceries or cover other bills.

‘The bottom line is that many workers will see a massive drop in living standards and increases in poverty,’ said Heidi Shierholz, director of policy for the Economic Policy Institute.

Lawmakers have to decide whether to extend two key programs. One known as pandemic unemployment assistance made unemployment benefits available to freelancers and self-employed people who wouldn’t normally be eligible.

Some may be able to receive another 13 to 20 weeks of benefits under a separate program that is not poised to expire, but it is not available in all states.

Asked how he would help those facing long-term unemployment, President-elect Joe Biden on Monday called on Congress to pass the Heroes Act, a bill passed by the Democratic-controlled House of Representatives that would extend the two unemployment benefit programs, along with other assistance.