Former Vice President Joe Biden maintains a substantial lead in three crucial midwest battlegrounds that are key to his plan for victory, according to a new poll.

Biden’s lead hits 10 points in Michigan, 8 points in Pennsylvania, and 9 points in Wisconsin, according to the University of Wisconsin / YouGov polls released Monday.

All three show a solid lead, and slightly above the consistent lead Biden has held in polling averages.

Biden’s lead, if it holds through Election Day, would have Biden reclaiming the ‘blue wall’ that fell to Trump in 2016.

The difference, according to Elections Research Center at the University of Wisconsin–Madison research, is that undecided voters and those backing minor party candidates are starting to break Biden’s way.

Biden already has a big lead among people who have already voted in the states. ‘Although Trump is favored by those who are yet to vote, the margin is not large enough to compensate for Biden’s advantage in the early vote,’ according to the poll. 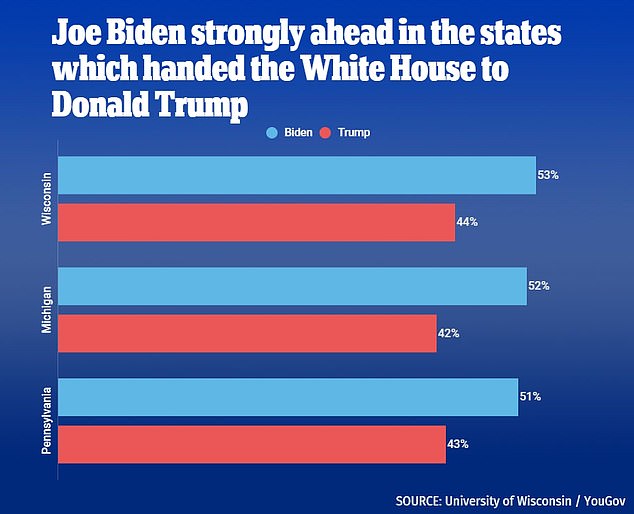 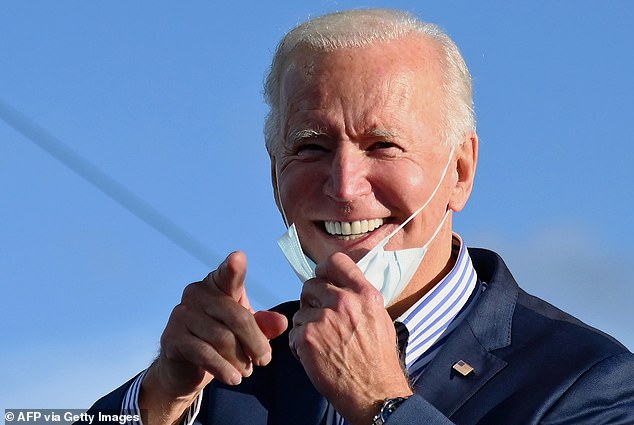 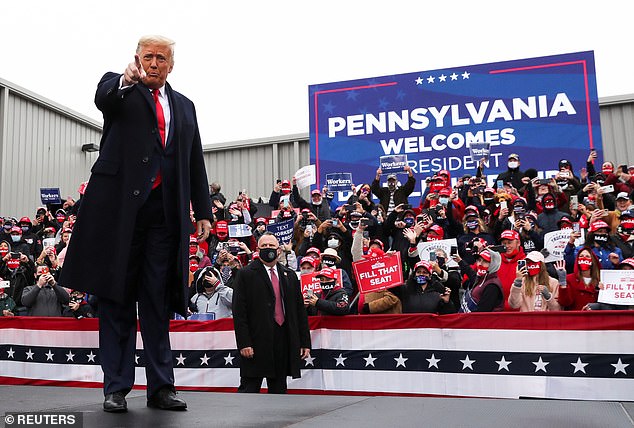 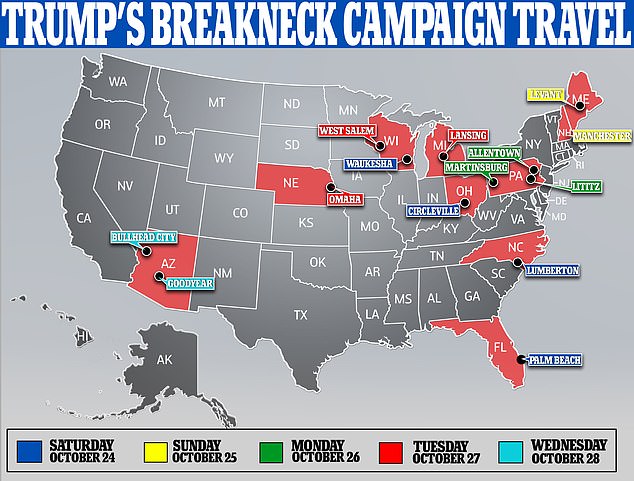 Biden is running up huge leads among people who have already voted – 87 per cent in Pennsylvania and 75 per cent in Michigan.

Trump headed back on the road Monday for his extended rally tour with three events scheduled in Pennsylvania even as he got bad polling news there – with the coronavirus interfering with other campaigns later this week.

The president has three rallies on his schedule for Pennsylvania, a state that was key to his 2016 victory.

Biden’s lead over Trump in Pennsylvania was 52 to 44 in the poll.

Trump is back on the road just hours after returning from trips to New Hampshire, a state Hillary Clinton barely carried in 2016, and Maine, where he is hoping to pry a single electoral vote from Joe Biden’s column.

It is impossible to separate the coronavirus from Trump’s final campaign push. He fused his claims about the virus with encouragement for Americans to vote in his Monday morning tweets.

Trump also hyped his rallies and attacked his Democratic opponent. ‘Three BIG Rallies today. Heading to Pennsylvania. I have plenty to say about the dishonesty of the Media and Sleepy Joe. A terrible coverup is happening in our Country!!!’ 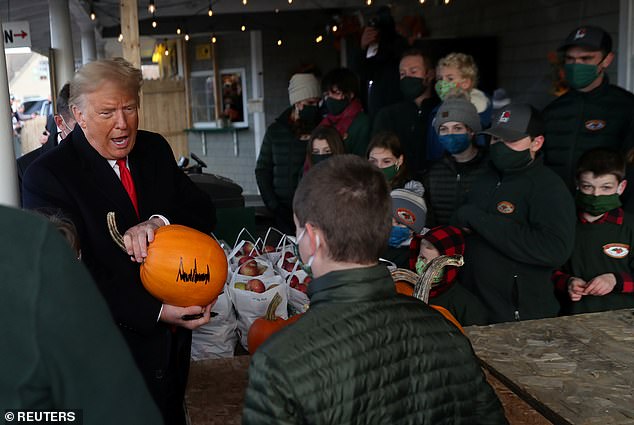 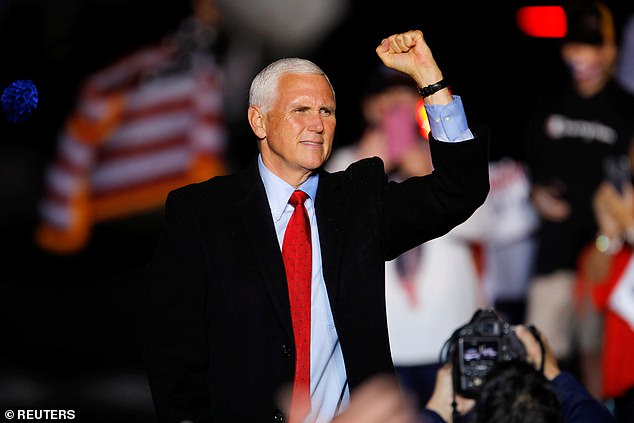 Vice President Mike Pence makes a fist at the end of a rally in Kinston, North Carolina, U.S., October 25, 2020. He campaigned despite being exposed to staff members who tested positive for the coronavirus. The White House said he was an ‘essential’ employee and met an exception to health guidelines for potential exposure

His frantic push for votes will take Trump to Michigan and Wisconsin on Tuesday.

Trump also heads to Nebraska in pursuit of a single electoral vote (Nebraska divides its electoral votes by congressional district).

Then he heads west, but his plan to hold an event in populous Las Vegas ran smack into Gov. Steve Sisolak’s social distancing guidelines.

Instead, he will rally supporters across the state line in Arizona, an hour and a half drive away, the Las Vegas Review-Journal reported.

Nevada GOP chair Michael McDonald blamed the governor’s enforcement. ‘He has such a large following in Southern Nevada and also in Nevada, this could be possibly one of the largest rallies he has ever held.’

The rally push comes as Vice President Mike Pence keeps up his own travel, despite give advisors testing positive for the coronavirus.

Pence flies to Hibbing Minnesota, birthplace of singer Bob Dylan, as Republicans hope to flip a state that Clinton closely won in 2016.

Pence is keeping up his schedule despite being a ‘close contact’ of infected aide Marc Short, due to being an ‘essential employee.’ He campaigned in North Carolina Sunday, just hours after news broke about infections among his top advisors.

A Manhattan-based celebrity physician known as Instagram’s “hottest doctor” was caught partying maskless on a boat in Miami after months of stressing the...
Read more

A never-before-seen collection of photographs taken while homosexuality was still illegal in the UK has captured English playwright Noel Coward with two of...
Read more
Load more