New 'super-white' paint reflects 95.5% of light off buildings and may replace air conditioners

Scientists say they have created a new super-white paint that reflects 95.5 percent of the sunlight that hits it.

The new acrylic, developed at Perdue University, remains significantly cooler than the surrounding temperature in both daytime and at night.

The team designed the paint with calcium carbonate fillers to minimize the amount of ultraviolet light the paint absorbs, instead of standard titanium dioxide particles.

Researchers say and could be used to keep buildings cooler naturally, helping to lessen climate change caused by air-conditioning and other cooling technology. 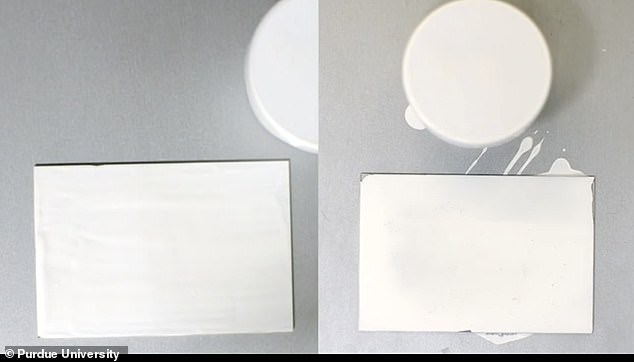 A new super-white paint (right) developed at Purdue university reflects 95.5 percent of sunlight and remains cooler than the surrounding temperature both at night and when the sun is at its peak

To develop a commercially viable paint that cools passively, Xiulin Ruan, a professor at Purdue’s School of Mechanical Engineering used calcium carbonate fillers to minimize the amount of ultraviolet light the paint absorbs.

During testing, the new acrylic remained 10 degrees C below the surrounding temperature at night and at least 1.7 degrees C lower when the sun was at its peak.

Other ‘heat-rejecting’ white paints only reflect about 80 to 90 percent of visible light and can’t achieve lower-than-ambient temperatures.

The calcium carbonate-based acrylic outperformed commercial paint when examined under infrared, according to a study published this month in Cell Reports Physical Science. 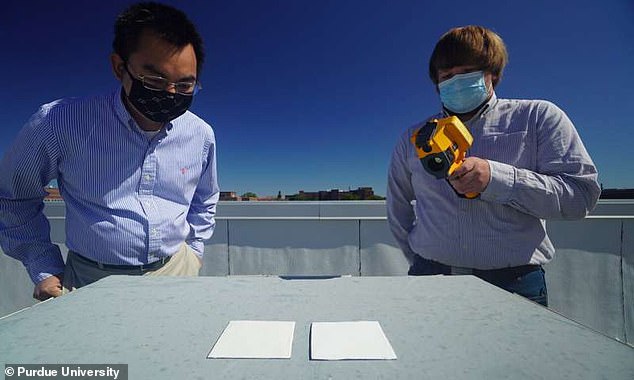 The new acrylic could be used to keep buildings cool naturally. ‘This paint may even be used to combat climate change since it rejects sunlight and radiates heat into space,’ says Xiulin Ruan (left), professor at Purdue’s School of Mechanical Engineering

‘Our paint is compatible with the manufacturing process of commercial paint, and the cost may be comparable or even lower,’ says Ruan. ‘The key is to ensure the reliability of the paint so that it is viable in long-term outdoor applications.’

Ruan says the paint has many applications, including preventing outdoor telecommunications equipment from overheating.

‘This paint may even be used to combat climate change since it rejects sunlight and radiates heat into space,’ Ruan said in a statement. 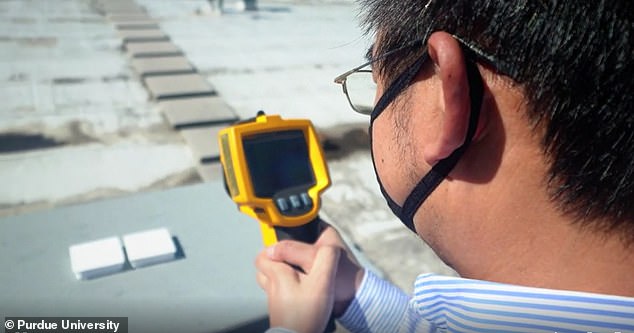 The calcium carbonate-based acrylic outperformed other ‘ heat-rejecting’ white paints when examined under infrared, and was the only one to achieve lower-than-ambient temperatures

His team will continue testing the substance to gauge its resistance to dust, water, detergent and other substances.

Other researchers eager to claim the ‘whitest white’ have looked at polar bear fur and the wings of the Cyphochilus beetle.

Across the board, competition to create vibrant unique colors is intense.

T-Mobile has sued small businesses for using magenta, which it claims it has a trademark on, and art supply manufacturer Daniel Smith bought the last remaining stock of Quinacridone gold in 2001.

In 2014, artist Anish Kapoor arranged an exclusive license to use Vantablack, then considered the ‘blackest black’ paint on the market.

Other artists criticized Kapoor for monopolizing the inky hue and painter Stuart Semple developed ‘Pinkest Pink’ and ‘Blackest Black,’ welcoming anyone but Kapoor to buy them. 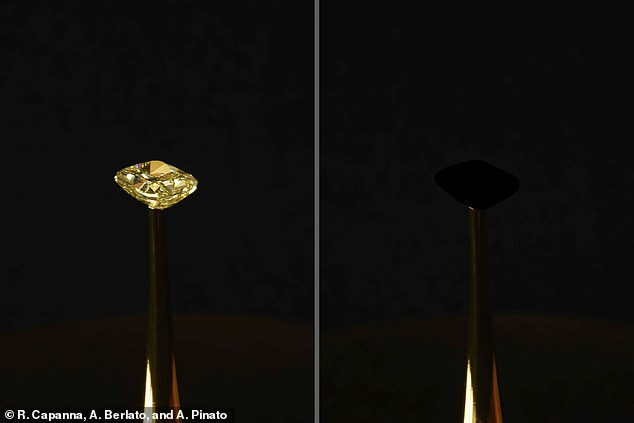 In 2019, researchers from MIT covered a $2 million diamond with what they claimed was the ‘blackest black’ known to man

‘I’ve been calling out sh—y elitist behavior of color criminals because nobody should be able to own colour!’ he told Fad magazine.

In April, Semple announced he had created ‘the whitest white’ paint, which reflects up to 99.6 percent of visible light.

He’s still refining White 2.0, but promises he’ll make it available to anyone who’s not a ‘color criminal.’

Last year, scientists from MIT announced they had developed the ‘blackest material ever made.’

To demonstrate the unnamed substance’s opacity, researchers covered a $2 million diamond with it, transforming the precious gem into a flat, black void.

Serial killer suspect: Jeremy Harris, 31, has been charged with three murders in connection to a...
Read more
U.S

Serial killer suspect: Jeremy Harris, 31, has been charged with three murders in connection to a...
Read more

Government workers had a close encounter of the strange kind out in the Utah desert.A crew with the state wildlife resources department was...
Read more
Load more