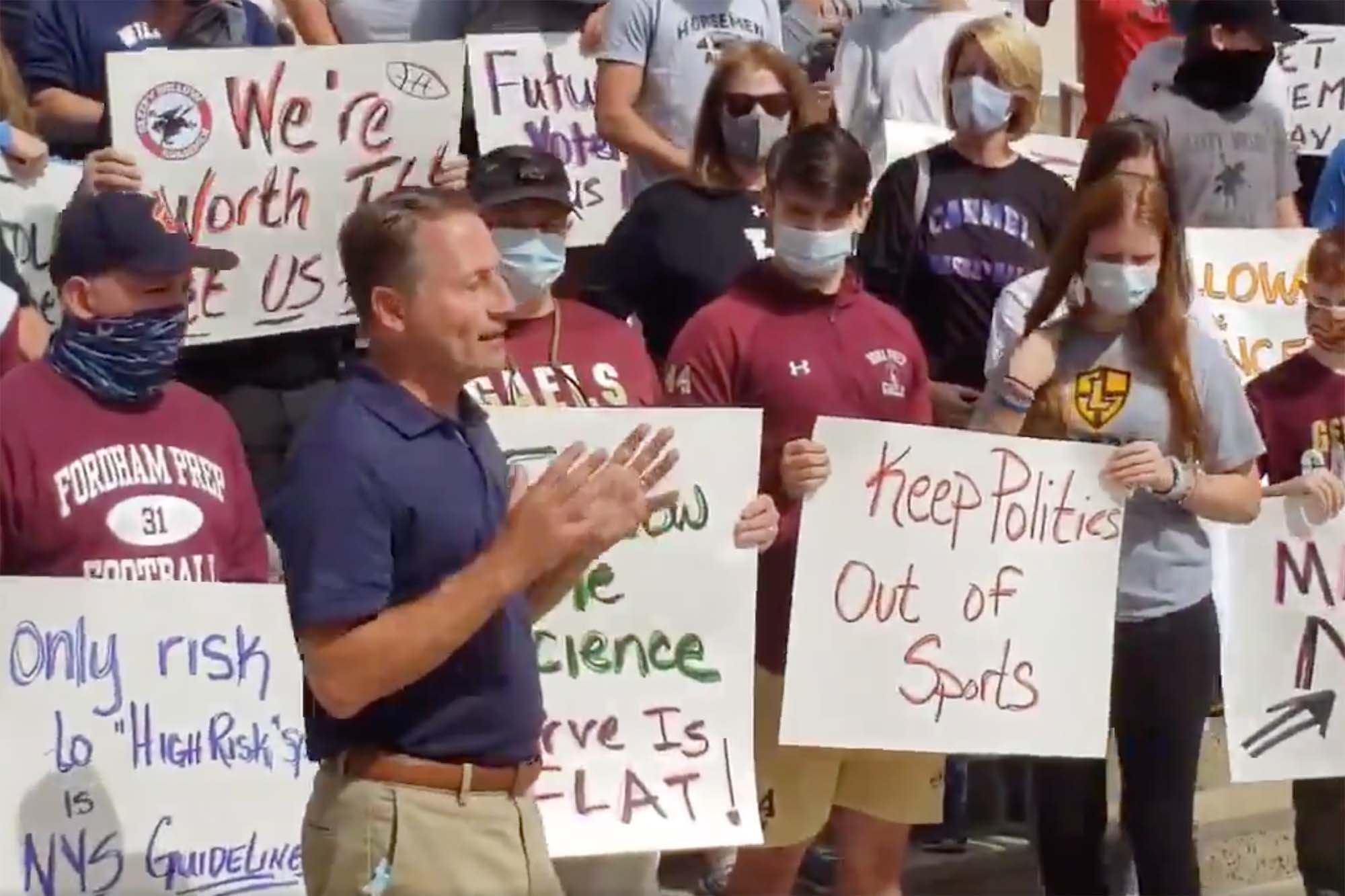 “Let them play!” chanted the group gathered at the Westchester County Center.

The demonstration came on what would have been the football season’s opening weekend.

However, the New York State High School Athletic Association announced on Thursday that certain sports — also including volleyball and cheerleading — would be delayed until the spring due to virus concerns.

Critics questioned the adjournment, citing the Empire State’s low COVID-19 infection rates and the fact that neighboring states like New Jersey, Pennsylvania and Delaware are proceeding with fall athletics.

“All we’re asking… is to be treated like everybody else,” former Westchester County Executive Rob Astorino said during the protest.

NYSHSAA executive director Robert Zayas said the decision was based on concerns over coronavirus transmission.

“These are unprecedented times and unfortunately, difficult decisions will have to be made to address this ongoing crisis,” he said in a statement last week.

Zayas added that coronavirus upheaval was making it difficult to hammer out a viable season and that the delay will allow for more preparation.

“It’s clear that administering high-risk fall sports during the COVID-19 pandemic presents a significant challenge for our member schools,” he said.

Some top players across New York have even transferred to states where football will be played in the fall.

Celebrity bail bondsman Ira Judelson, whose son is a standout football player in Westchester, said kids are grappling with isolation and depression due to the pandemic — and the pause on sports is just making matters worse.

“This just makes things worse for them,” he said. “You are going to have kids getting into all sorts of trouble without football. Schools should at least be given a chance to see if they can make this work.”

Judelson said that kids will inevitably gather for parties in uncontrolled and potentially risky environments.

“Where would you rather have them on a Friday or Saturday, on a sport field with masks and precautions or outdoors at a party?” he asked.

Nationwide, a total of 18 states have pushed football to 2021 while 33 plan to continue with a fall schedule. Connecticut officials also cancelled fall football, prompting a large demonstration against the move last week.

In the five boroughs, the governing Public High School Athletic League has paused fall sports indefinitely, with no specific plans for a return, according to a Department of Education spokesman.

The decision has roiled some Big Apple coaches and players, too.

“It’s not fair to these kids,” said one Brooklyn public high school football coach. “They’ve done everything that has been asked of them, they’ve been trapped in their homes, and now they can’t play. At least give this a shot to work.”

C.J. O’Neill, head football coach at the catholic Cardinal Hayes High School in The Bronx, said he had hoped for the resumption of fall sports in some form.

“Right now, we have to attempt to turn the flow back on a little bit and we’re not doing that,” he said. “That would be the intelligent direction to move in. We have to be masked, we have to use all the precautions, but we have to progress to get life restarted.”

O’Neill noted that the cessation of sports like football has an especially acute impact on low-income kids.

“There is so much more learned in football than football,” he said.

“Without it in a lot of these young men’s lives you’re going to see negative consequences. We need to take that into account here. There is a structured intelligent way to move football forward so these young men can benefit from the game.”

But O’Neill said he would adhere to the state’s decision and focus his efforts on making spring football a success.

“It will work,” he said. “We have no other option right now.”