A printing company in upstate New York is adding a little humor to holiday gatherings by selling stickers that make it appear like Governor Andrew Cuomo is peeking through the window at your Thanksgiving dinner.

Dan Bacon, the owner of Custom 716 in Buffalo, created the stickers featuring half of Cuomo’s face after the governor introduced the mandate limiting indoor gatherings to ten people due to rising coronavirus cases in the state.

The governor has urged New Yorkers not to gather with family and friends outside of their household this Thanksgiving as he receives pushback from those who believe it can not be readily enforced.

Bacon revealed he has received hundreds of orders for the $10 sticker already as Cuomo fans and critics alike look to welcome him as their ’11th guest’. 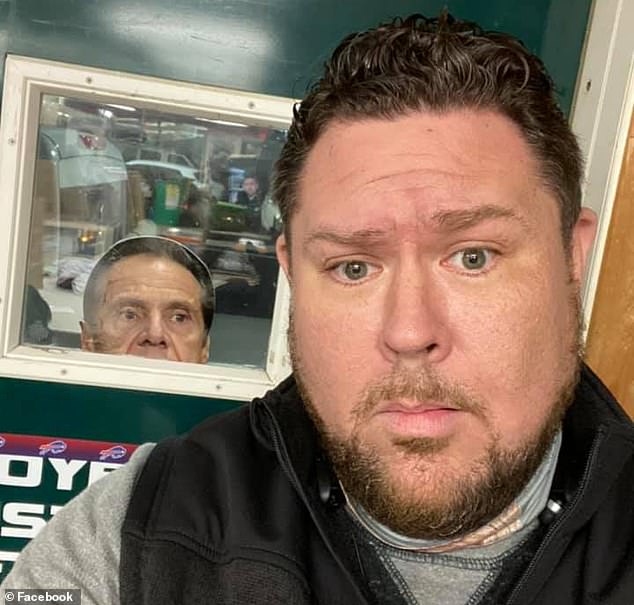 Dan Bacon, the owner of Custom 716 in Buffalo, New York, has created $10 Andrew Cuomo stickers so they governor can join as the ’11th guest’ at Thanksgiving gatherings 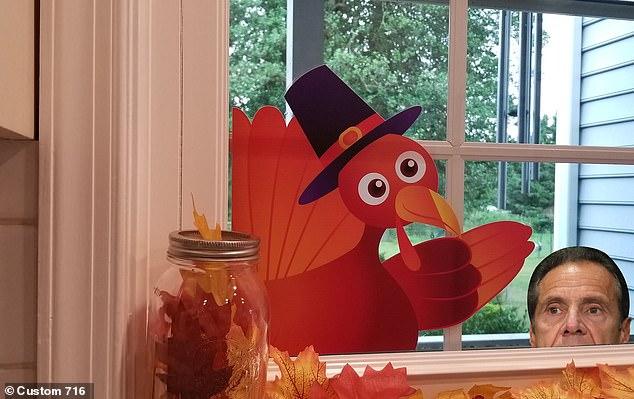 Bacon said that he came up with the idea after seeing a similar meme and thought it could bring a laugh to what he predicts will be a difficult holiday season for many.

‘Whether you love him or you hate him, it works. No one has said anything negative about him.’

‘Not a lot of people are laughing right now,’ he added to NBC New York. 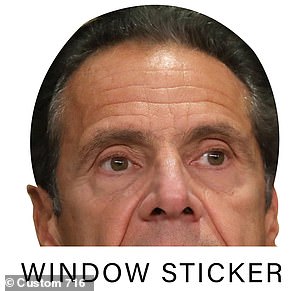 ‘A lot of people have been impacted negatively because of this. So if I’m able to share a laugh from one home to another, that makes me happy.’

Cuomo has stood by his decision to introduce the mandate ahead of Thanksgiving, despite pushback from critics, as he predicted that the state will see a rise in COVID-19 cases if residents don’t heed his warning.

‘Your safe zone, it’s not a safe zone. Your safe zone is dangerous this year,’ he said Thursday. ‘This year, if you love someone, it is smarter and better to stay away. ‘

However, last week Erie County Sheriff Tim Howard stated that  his deputies would not be breaking up gatherings in private homes if they broke the mandate.

‘This national holiday has created longstanding family traditions that are at the heart of America, and these traditions should not be stopped or interrupted by Governor Cuomo’s mandates,’ Howard said.

Lieutenant Governor Kathy Hochul insisted that the mandate was not about the need for gatherings to be dispersed but was announced to encourage New Yorkers to avoid traveling and large gatherings. 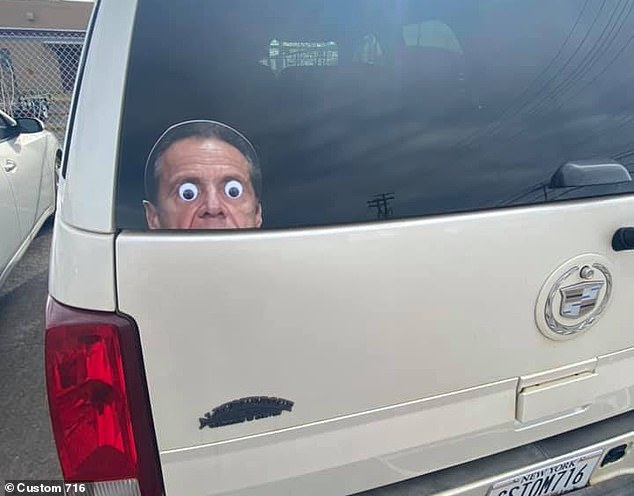 Bacon says he created the stickers, pictured above, just for fun and not as a hit at Cuomo 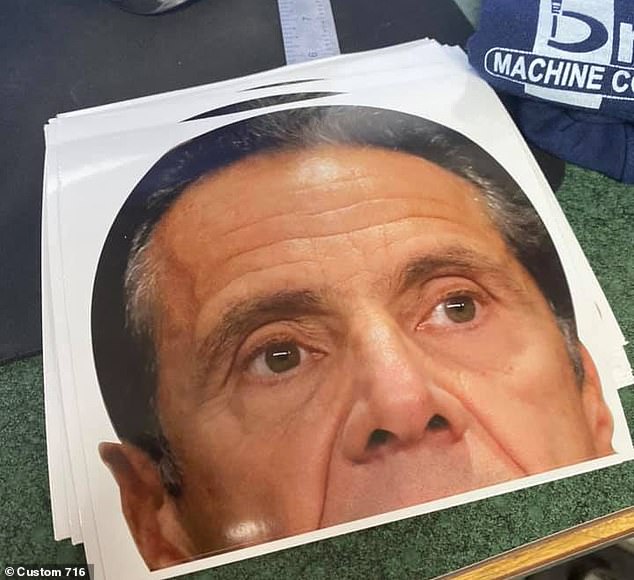 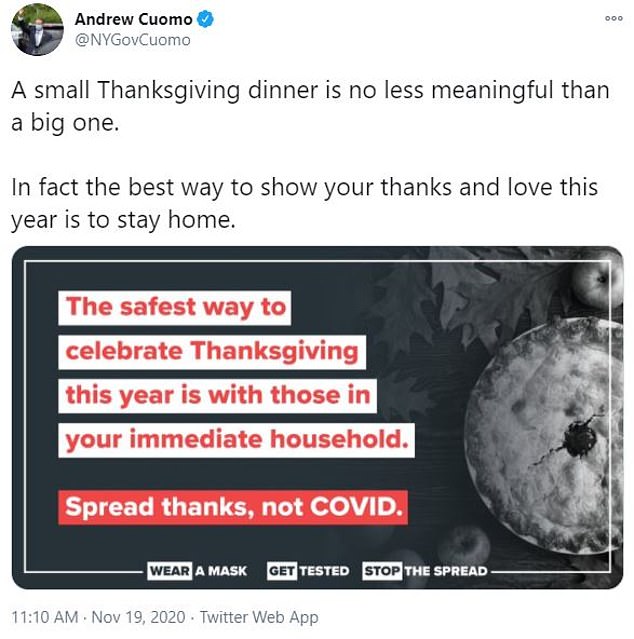 Bacon, a father of three who began his small printing company earlier this year, told the Daily News that he believes most people will be smart about seeing their families this year.

‘I get it, you’re trying to protect people, but at the same time I think if you’re getting together with your loved ones if you were feeling sick or felt like you were compromised in any way would you really go and spend time with your family,’ he said.

While the physical operations of his business fell through during the pandemic, Bacon has since continued to print his products from a nearby store that does custom work on cars and trucks, and he relies on his online orders.

Yet when customers call into the shop, he says that he can immediately tell if they’re there for a Cuomo sticker.

‘Everyone that’s come in has come in laughing,’ he said.

‘I just love making people laugh so this is just like a huge way to making so many more people that I don’t even know, that I would probably never meet, and this is just another way to do that.’

He has also created tote bags that show Cuomo cast as the Grinch in preparation for the same restrictions around Christmas gatherings.

The bags read: ‘Every New Yorker up in New York liked Christmas a lot. But the governor who lived east of Buffalo did not.’

Bacon is not the only person selling the sticker, however.

Rory Allen, owner of ZoomBuffalo.com, has also created an ’11th Guest’ sticker which features simply Cuomo’s eyes and the top of his head that can be stuck on the window, according to WKBW.

‘For anyone that wants to make sure their family only has the proper amount of guest this Thanksgiving’ the site says.

Allen also says that the sticker was also not a hit at the governor but made just for fun.

The Centers of Disease Control and Prevention has also ‘strongly’ advised people to avoid travel and large gatherings this Thanksgiving as the country’s cases spike and deaths rose over 252,000. 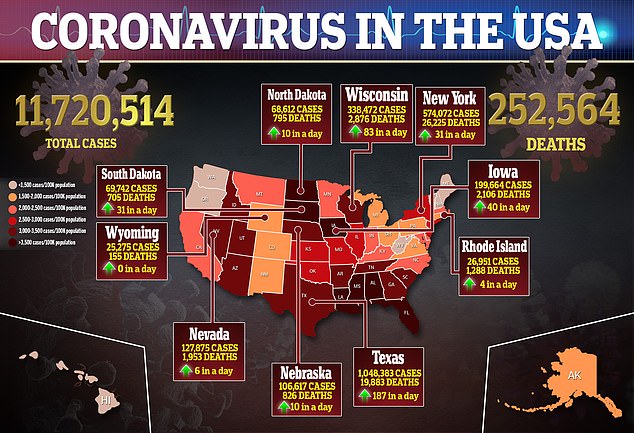 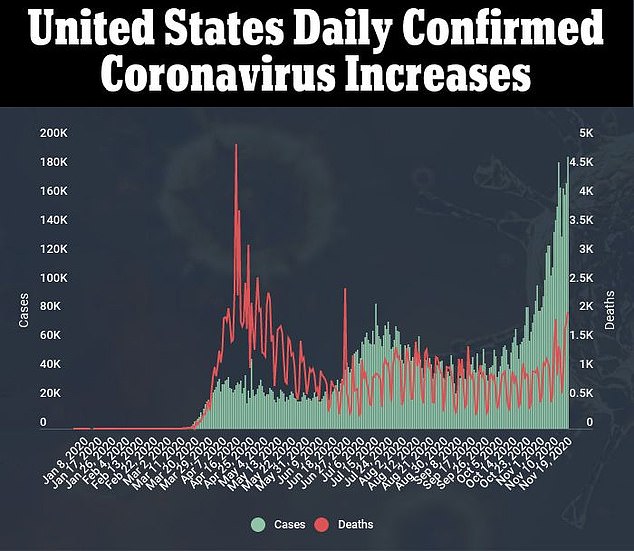 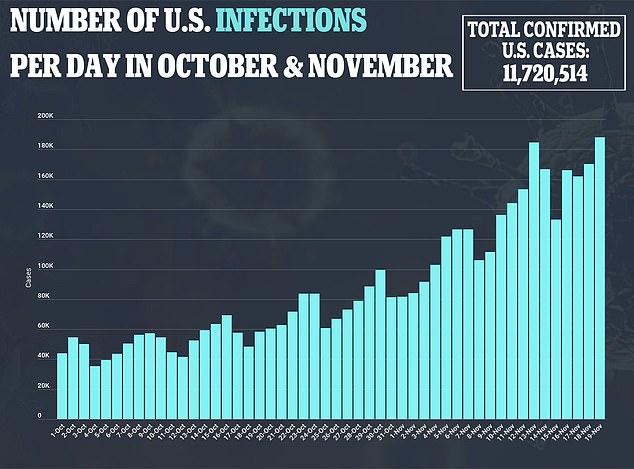 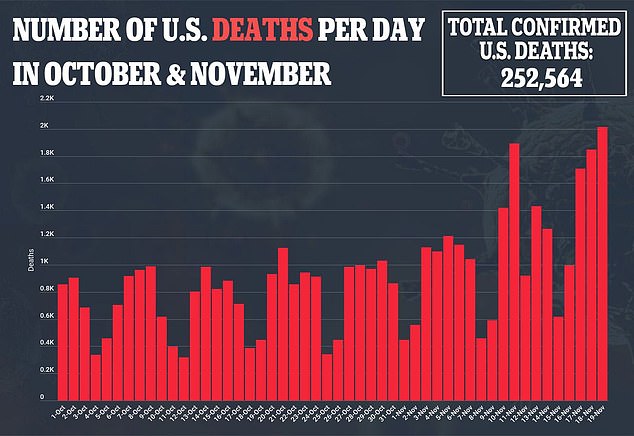 The nation’s top public health agency made the recommendation on Thursday and it is some of the firmest guidance yet from the government on curtailing traditional gatherings to fight the outbreak.

The travel advice is a ‘strong recommendation’ and not a requirement, CDC official Henry Walke said, adding that the agency was giving the advice after the majority of states experienced a surge in coronavirus cases in recent weeks.

Daily cases, which are currently on the rise in all 50 states, hit a record high of 187,833 on Thursday.

Daily deaths also surged to 2,015 – the highest number of fatalities per day since back in May during the initial peak of the virus – while more than 80,600 patients are now hospitalized across the country.

‘We’re alarmed with the exponential increase in cases, hospitalizations, and deaths,’ Walke said.

‘One of our concerns is people over the holiday season get together, and they may actually be bringing infection with them to that small gathering and not even know it.

‘We’re very concerned about people who are coming together sort of outside their household bubble.’

Among its other recommendations, the CDC has suggested that Americans forego caroling, loud music and even drinking alcohol over the holidays.

More than 252,000 Americans have died from coronavirus with over 11.7million cases confirmed nationally.

Facebook
Twitter
Pinterest
WhatsApp
Previous articleSightings of ravenous 4-foot lizards surge in southeastern US
Next articleAndrew Giuliani, son of Rudy and aide to Trump, has COVID-19

Jake Paul has backpedaled on comments he made calling the deadly COVID-19 pandemic a 'hoax'.The YouTube star, 23, told The Daily Beast on...
Read more
U.S

He added: "My wife has the much harder end of the job."She's got two kids to look after, so it was a little...
Read more

Rosemary is a woody plant with fragrant, needle-like leaves and flowers.It belongs to the mint family and is native to the Mediterranean region.While...
Read more

Rosemary is a woody plant with fragrant, needle-like leaves and flowers.It belongs to the mint family and is native to the Mediterranean region.While...
Read more
Load more

JJ Chalmers: Strictly star's link to A Place In The Sun...