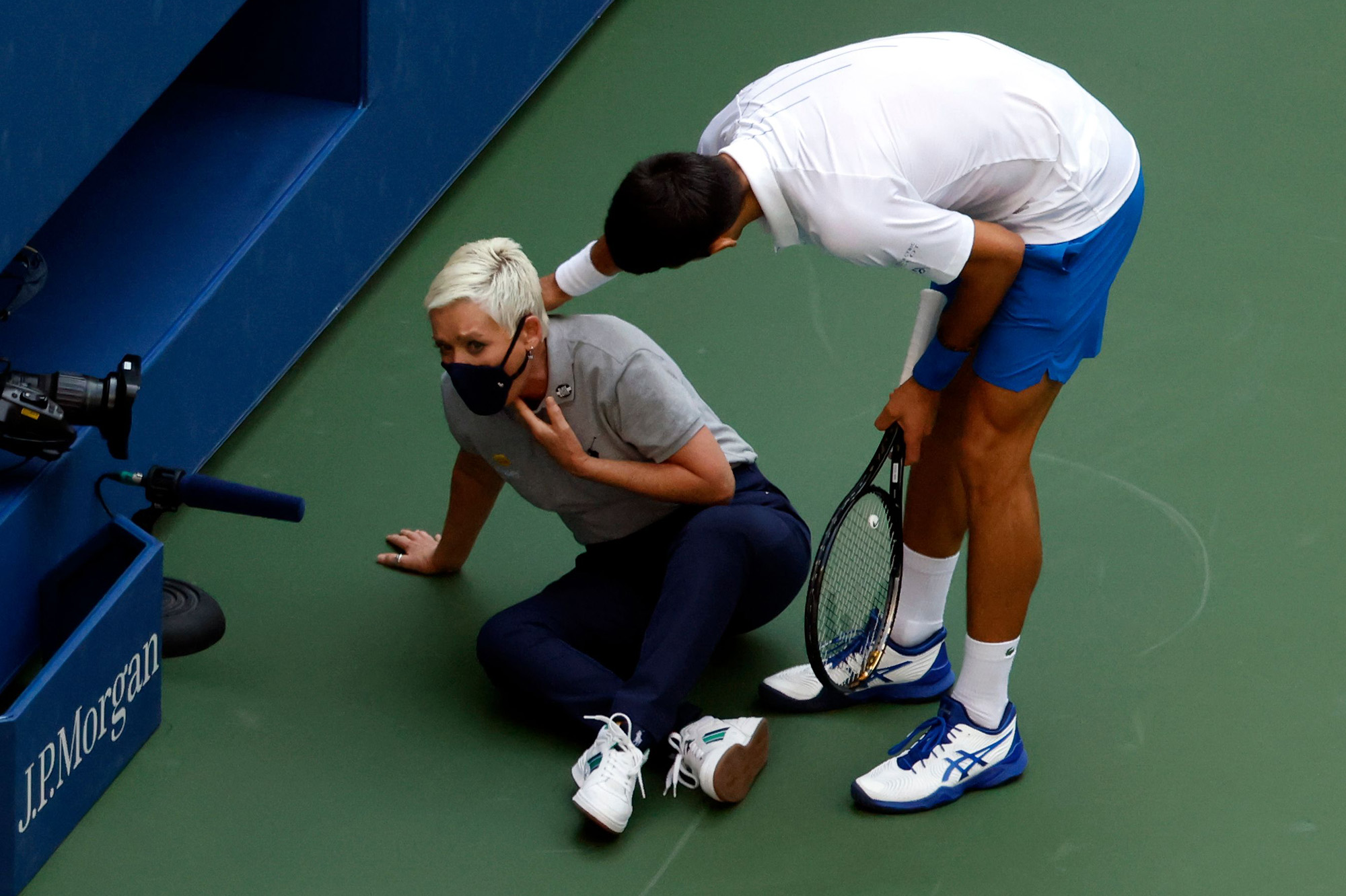 There was always going to be an asterisk next to the U.S. Open championship played without fans and under a pandemic/bubble environment.

Now you can draw a bigger, fatter asterisk after the USTA’s decision Sunday to disqualify Novak Djokovic for accidentally hitting a ball after a point that struck a female line judge in the throat while she was not looking.

The lack of malice and intention couldn’t have been clearer when you saw Djokovic’s face react in horror.

The No. 1 seed didn’t necessarily pound the ball, but flicked it to the back wall, hitting the judge in a vulnerable spot. Djokovic was the first one to rush over to her.

The tennis pundits of ESPN, business partners with the USTA, defended the decision about “rules being rules.” It was a great day for all those tennis “abuse-of-ball’’ sticklers. It was a bad day for tennis amid a struggling tournament devoid of spectators and, according to TV ratings, interest.

The Open officials originally did not want to hold the event without the pomp and circumstance of 850,000 people pouring into the grounds.

They changed their minds, announcing the show would go on anyway. The USTA stated it would be good for tennis to hold the Open.

This disqualification isn’t good for tennis. A small-minded ruling won’t create new tennis fans. A rule was interpreted so narrowly and without the spirit of this unprecedented occasion — bouncing the world’s best player originally hesitant to fly to the U.S. because of the pandemic.

The overwhelming favorite is gone, and so is Rafael Nadal and Roger Federer, who opted out.

When the Open title is decided next Sunday, it will be the first time a non-Big 3 has captured a men’s Grand Slam since 2016. And the first one at the Open since 2014 (Marin Cilic).

The hard-serving fifth seed, Germany’s Alex Zverev, will be one of those to watch now — if anyone is still watching.

“There’s a rule in place for it,’’ Zverev said. “The supervisors are just doing their job. It’s very unfortunate for Novak. He’ll be upset by it.’’

Soeren Friemel, the tournament referee, went on Zoom to say whether it was intentional was not an issue. The only thing that mattered, he said, was his determination the ball was struck “angrily’’ and injury ensued.

Friemel wasn’t on the court at the time. He didn’t look at the replay to confirm how angry or how hard Djokovic hit the ball because it is against Grand Slam policy. Yet a player can protest a first-round, first-set, first-serve fault via replay. Tennis is amazing.

“Defaulting a player is a very tough decision at a Grand Slam,’’ Friemel said. “You need to get it right and make the right decision. Everyone on court was aware what’s at stake.”

Two years ago, the ESPN announcing crew railed against the tournament chair umpire Carlos Ramos for docking points and games from Serena Williams after her vicious diatribe that lasted 15 minutes. It was a premeditated, relentless verbal attack by Williams.

When Djokovic left the grounds 20 minutes after the disqualification without giving a Zoom interview, Patrick McEnroe talked about loving the decision and pounded Djokovic for not owning up to his mistake. Later, on Instagram, Djokovic apologized for his behavior, saying he has to work on it.

Only ESPN’s Cliff Drysdale summoned the courage to go against the USTA. Drysdale said this wasn’t the time or place to enforce this rule this strictly during a pandemic and in a sport that was shelved for five months.

There was an absence of malice but it still resulted in the absence of Djokovic, who had won his first 29 matches of 2020. The Serbian, trailing 6-5, stated his case he should be docked the first set.

“They asked me before the tournament ‘Novak or the field’ and I took Novak,’’ John McEnroe told The Post before the incident. “It’s going to be a tall order. It certainly hurt our two biggest male stars aren’t playing. That Serena is chasing history and Novak helps bolster the event.’’

Not anymore. Labor Day still has Serena Williams continuing her bid in the Round of 16 for a record-tying 24th Grand Slam title against Greece’s Maria Sakkari, who beat her in a tuneup two weeks ago.

But now it has no Djokovic — and not because he caught COVID-19 again. The tournament referee is lucky no fans were at Arthur Ashe Stadium on Sunday to hear his decision.

Should Mets keep Van Wagenen? Examining his hits, misses and one ‘ridiculous’ move