BREAKING NEWS: NYC public schools will CLOSE tomorrow as test positivity rate approaches 3% and Cuomo warns he will also shut down gyms and indoor dining if it keeps going up 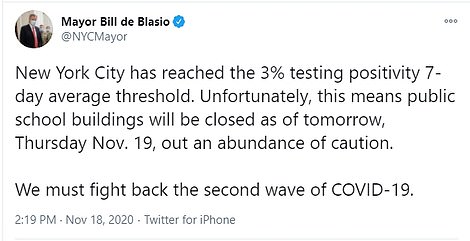 Public schools in New York City will close from Thursday as a result of the rising COVID-19 test positivity rate which is now nearing 3 percent.

The schools commissioner announced on Wednesday afternoon that all schools would revert to remote learning starting from Thursday morning.

Governor Andrew Cuomo is also warning that he will shut down indoor dining and non-essential businesses like gyms if it keeps going up which, he says, is inevitable with Thanksgiving round the corner.

Cuomo said New York City’s infection rate was 2.5 percent on Wednesday. Mayor Bill de Blasio said it was 3 percent. It’s unclear whose numbers are most up to date or why they continue to differ, as they have been throughout the nine-month pandemic.

While the case count continues to rise, deaths and hospitalizations are holding steady.

Indoor dining, which is currently at 25 percent capacity, will stop and outdoor dining will be limited to four people at a table if NYC hits a 3 percent positive-test rate.

Houses of worship will still be allowed to operate, however, at a 33 percent capacity.

Cuomo warned that there will be a ‘tremendous spike’ after Thanksgiving due to people ignoring rules to come together. 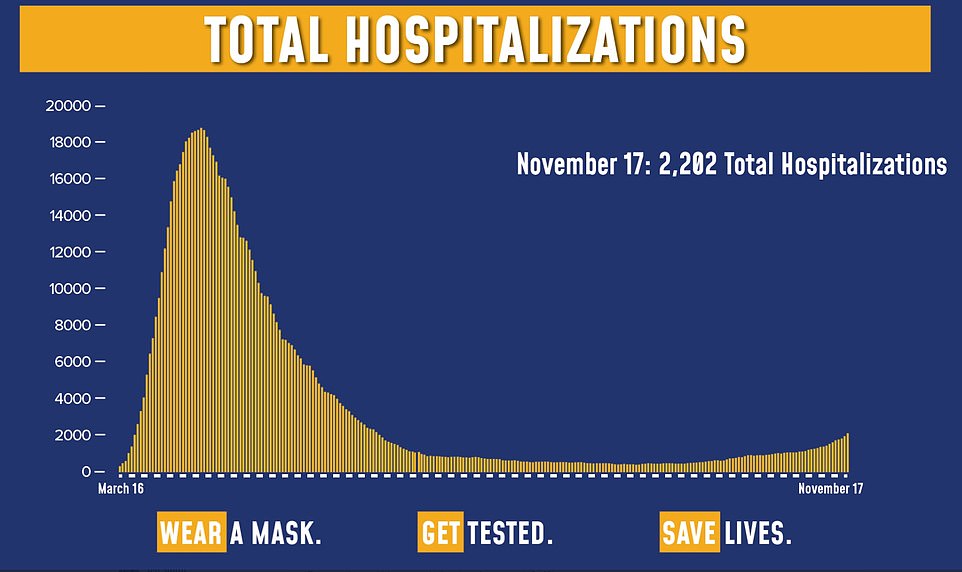 The rules now are that no more than 10 people can gather together.

Cuomo said the rising infection rates were all ‘self-imposed’ and compared it to a person ‘eating cheesecake and having a weight problem.’

‘Don’t be the turkey on Thanksgiving,’ he warned.

Cuomo became frustrated on Wednesday as journalists questioned him on whether or not schools would be open tomorrow, and whether the decision was down to him or Mayor Bill de Blasio.

He called the first reporter who asked him about it ‘obnoxious’ and said they hadn’t been paying attention.

He then bit back at the second reporter who asked if schools would be open tomorrow, then snapped at a third who asked if it was him or de Blaso who made the rules.

‘You don’t know?’ he asked repeatedly.

Ultimately, the state overrules the city on shutdowns. However, Cuomo gave de Blasio the power to close schools until the infection rate was lower than 3 percent in his ‘orange zones’.

Across the board, if it hits 3 percent it enters an orange zone and schools close.

Since the start of the pandemic, parents in New York City have found the conflicting remarks and rules confusing.

‘You will see a tremendous spike after Thanksgiving,’ Cuomo warned on Wednesday, saying: ‘Thanksgiving is a holiday and people come together.

‘If you don’t have a real fear about COVID, you’re going to come together.’

He said he has told his own mother that they cannot spend Thanksgiving with his family.

‘Your family sounds safe, doesn’t it? No. You won’t be safe. It’s an illusion. My sister loves me, my sister could infect me. Not maliciously, but accidentally,’ he said.

Instagram model helps women find out if their partner is cheating by sliding into their DMs – with very interesting results.An Instagram model...
Read more
U.S

Elizabeth Hurley shared a rare snap of her 'glorious' sister as they posed in matching bikinis on Instagram on Friday to promote her...
Read more
U.S

All hail the Dales! There's no place like Yorkshire for a family walking holiday

We’ve climbed for half an hour when the summit makes its first appearance, piercing through the moody clouds above. My 17-year-old daughter Nathalie...
Read more

Clubs expecting 2,000 fans next week have been advised they should only let 1,000 into the stadium

Clubs authorised by governemnt to let 2,000 fans into their stadiums under the latest coronavirus tier system have been told they should only...
Read more

Instagram model helps women find out if their partner is cheating by sliding into their DMs – with very interesting results.An Instagram model...
Read more

'We'll get what we deserve': Pep Guardiola vows that a Manchester...
Read more
Load more

All hail the Dales! There's no place like Yorkshire for a...

Clubs expecting 2,000 fans next week have been advised they should...

Instagram model offers to send DMs to men with girlfriends to...