Obama trolls Trump saying his TV ratings are down

Former President Barack Obama is campaigning for Democratic nominee Joe Biden in Miami, in an effort to help his former running mate win the key swing state of Florida.

‘What we do in these next 10 days will matter for decades to come,’ Obama told the crowd at the drive-in event on Saturday, as spectators honked their car horns in agreement.

In an impassioned speech, Obama tore into President Donald Trump, saying he has treated the presidency like ‘a reality show to give himself more attention.

‘As we know from the other day his TV ratings are down,’ Obama added, referring to last week’s dueling town halls, which saw Biden’s town call get higher ratings.

Developing story, check back for updates. 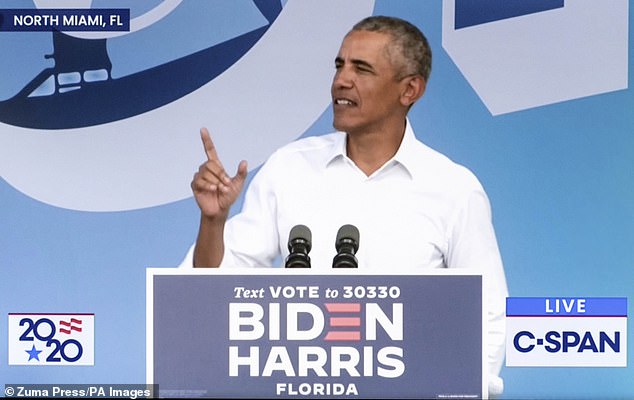 Facebook
Twitter
Pinterest
WhatsApp
Previous articleAs the nights draw in, Britain lights up and it's time to… go with the GLOW!
Next articleKatya Jones issues caution over Strictly partnership with Nicola Adams: 'Too chilled!'