By Ariel Zilber For Dailymail.com and Associated Press

October snow flurries in western and northern Michigan were reported for just the third time in recorded history and blizzard-like conditions were felt in central and northern Wisconsin on Friday.

Snow flurries mixed with rain on Thursday night and into Friday morning in the state’s Upper Peninsula as well as the northern Lower Peninsula.

In the Gaylord region, slush was seen on the ground as the snow quickly melted due to the high temperature of the soil, which remains in the upper 40s, according to the Detroit Free Press.

It is unusual for snowfall to be reported this early in the year, though it is the second time this fall. 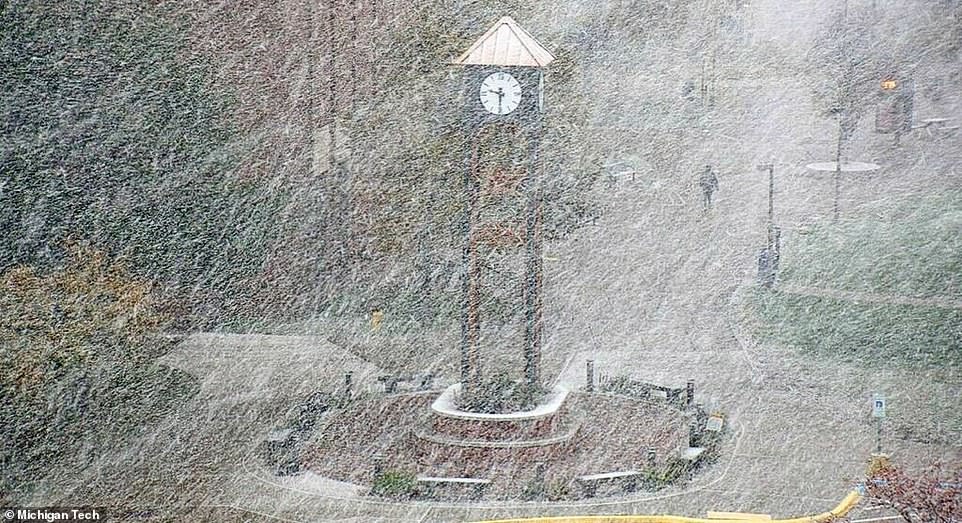 A webcam from the campus of Michigan Technological University in Houghton, Michigan, on Friday captured images of strong snow flurries 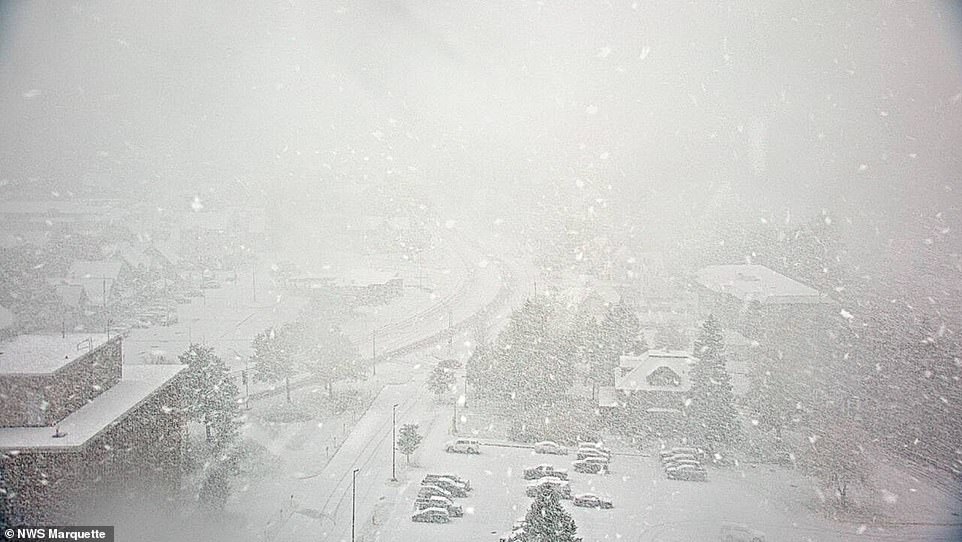 October snow fell in the state’s Upper Peninsula and the northern part of the Lower Peninsula for just the third time in recorded history. The image above is from the MTU campus in Houghton on Friday 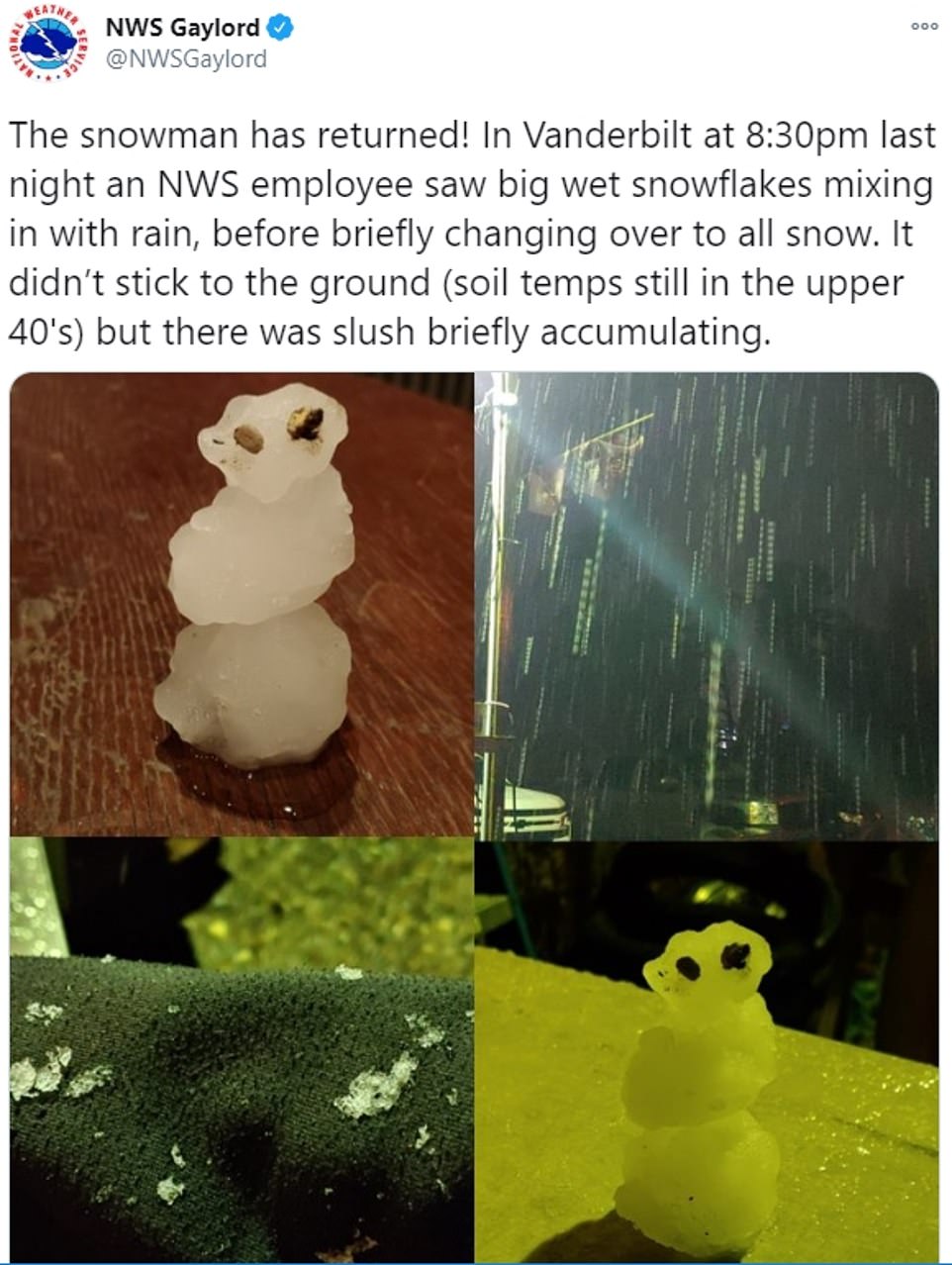 In Vanderbilt, Michigan, snow flurries mixed with rain to create sleet, though it quickly melted since the temperature of the soil remains in the 40s – well above freezing

On October 2, a trace of snow was reported in the town of Marquette, Michigan, and the surrounding areas on the Upper Peninsula.

The previous record for the earliest snowfall in Michigan was from 2006, when an unexpected snow storm dumped four inches of the white stuff in Grand Rapids and an astounding eight inches fell in Hastings.

On its Twitter feed, Michigan Technological University on Friday posted an image of what appeared to be blizzard-like conditions in its home town of Houghton.

Houghton, a small town in the northern part of the state’s Upper Peninsula, not far from the shores of Lake Superior, is notoriously cold.

Low temperatures this week in Houghton are expected to dip into the lower thirties.

Scattered rain and snow showers are in the forecast for the weekend. The National Weather Service is warning drivers traveling north of M-68 to be wary of slick roads.

The Upper Peninsula and northern Lower Peninsula could see snow on Saturday morning and possibly again on Sunday.

The snow is expected to turn into rain as the warm front lifts across the region.

The northern and central parts of Michigan’s neighbor to the west, Wisconsin, woke up to snow flurries on Friday morning with up to two inches forecast for this weekend. 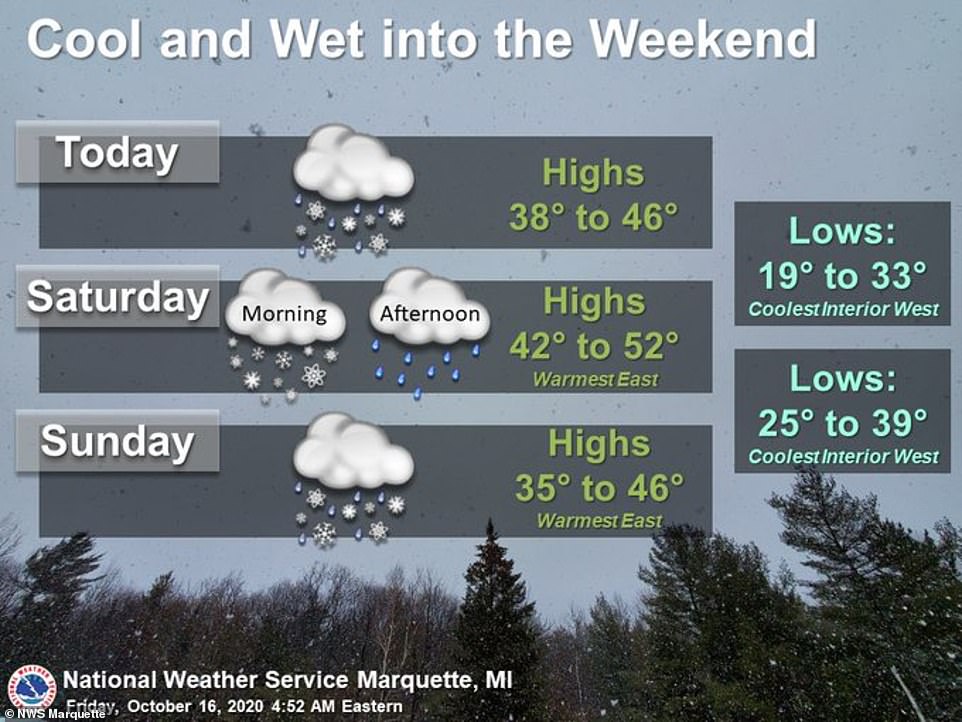 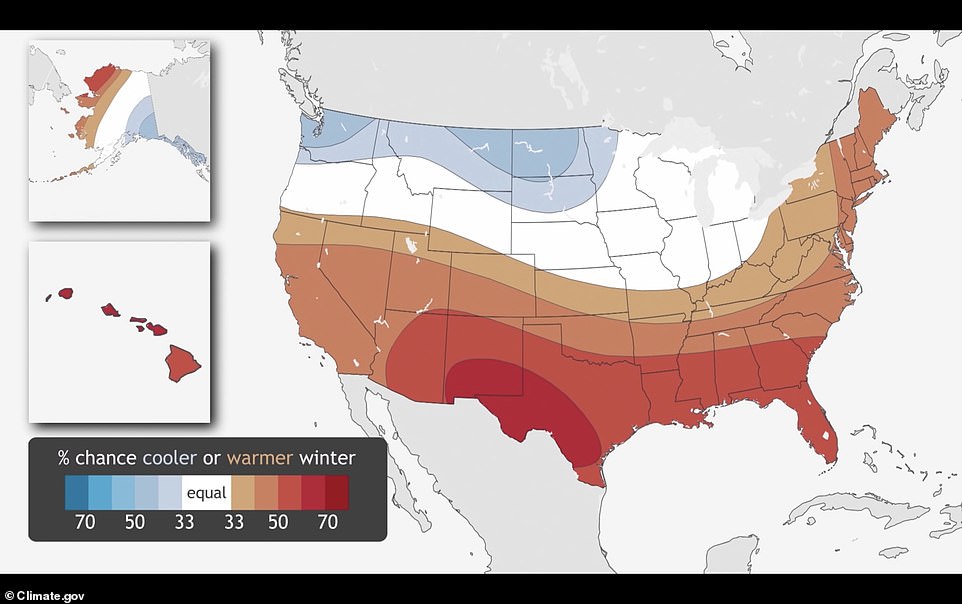 The NOAA released a graphic (pictured) that shows the temperature forecast for different  U.S. regions in the upcoming months. Despite the early snowfall in Michigan and Wisconsin, this year’s winter is expected to be normal

In northern and central Wisconsin, a noticeable layer of snow accumulated on the ground on Friday.

This weekend, some flurries could be in the forecast for Milwaukee and Green Bay.

According to the National Weather Service office in Green Bay, residents can expect ‘1 to 2 inches of snow across mainly central into north-central Wisconsin.

‘Some wet snowflakes may initially mix in over the Fox Valley and far northeast Wisconsin, but (we’re) not expecting any accumulation as the precipitation will quickly transition to rain.’

Still, the early snowfall in Michigan and Wisconsin are not a harbinger of things to come this winter, according to forecasters.

The National Oceanic and Atmospheric Administration predicted that the region stretching from Oregon and Washington to Michigan and dipping down to Illinois, Indiana, Ohio and other parts of the Ohio Valley will see a wet winter, but no more than normal.

Facebook
Twitter
Pinterest
WhatsApp
Previous articleAm I being taken for a ride? The Holiday Guru solves coronavirus travel issues
Next articleWhy Italy's beautiful Lake Como is such a popular haunt for famous types like Jennifer Aniston

Aviation experts have claimed they have finally located the crash site of Malaysia Airlines flight 370 which vanished in March 2014 with 239...
Read more
U.S

A suburban Chicago police officer who shot a Black couple inside a vehicle - killing a 19-year-old man and wounding his girlfriend -...
Read more

Thyroid cancer: Cushing syndrome is a lesser-known warning sign – what is it?

Thyroid cancer is a rare type of cancer affecting the thyroid gland, a small gland at the base of the neck producing hormones. It's...
Read more
Load more