OnlyFans sex worker is on track to make $35,000 a month after Fort Bragg Twitter incident

An OnlyFans sex worker who went viral last month after an official Army Twitter account left lewd comments on her nude photos says she is now on track to earn $35,000 a month thanks to the tweets.

Adult content creator Quinn Finite was thrust into the Twitter spotlight in October after receiving a series of sexually-charged remarks from the Fort Bragg military base’s profile.

The army installation, the largest in the US, sparked controversy after replying to Finite’s pornographic content, expressing approval of her topless photo in one tweet and commenting on her pubic hair in another.

Within minutes, the explicit tweets had blown up on Twitter, drawing hundreds of replies and jokes from users who began trolling the Army account’s page. 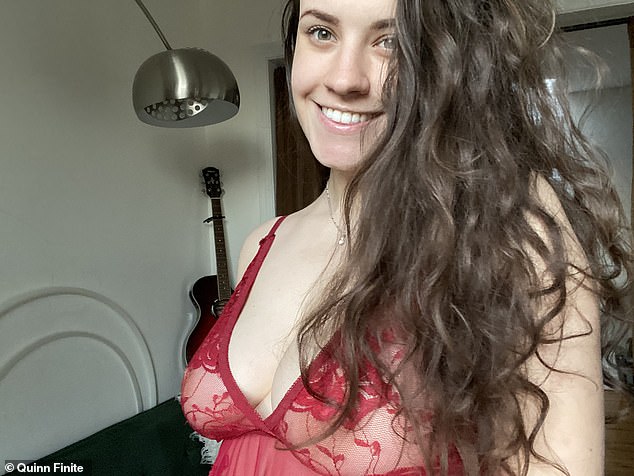 Quinn Finite says she’s raking in close to $35,000 a month on OnlyFans thanks to the viral incident last month 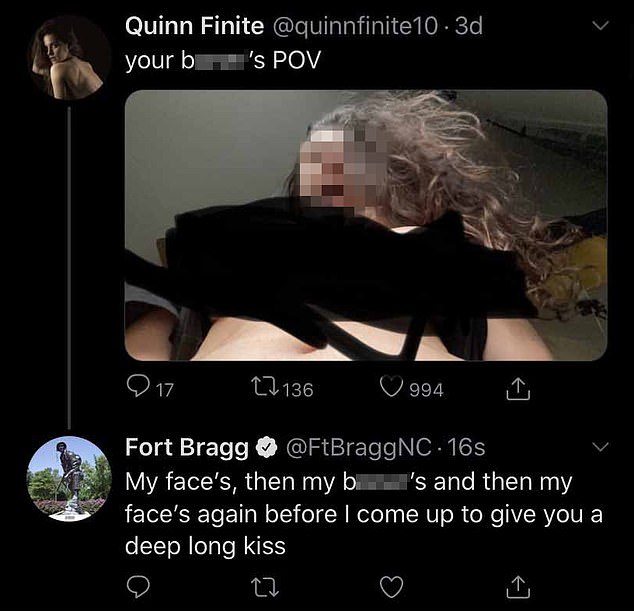 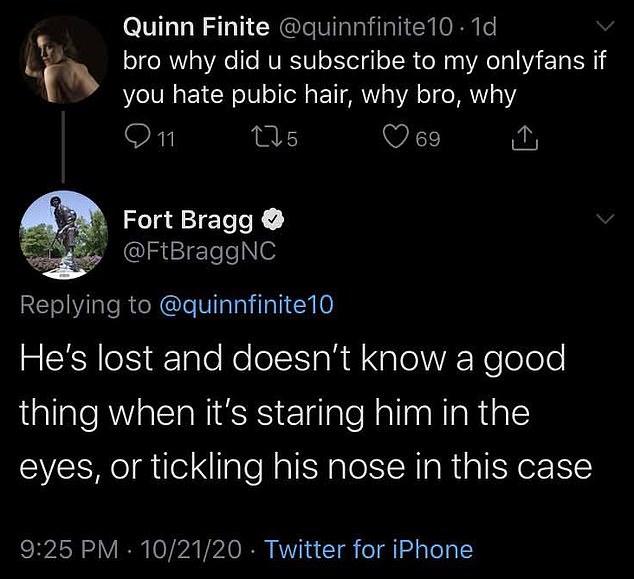 Fort Bragg responded to the incident an hour later, claiming its Twitter page had been hacked before deleting its account altogether. The 18th Airborne Corps a day later revealed an administrator for the account had admitted to posting the racy tweets.

The blunder posed a PR nightmare for the military base, but to Finite, the incident was like hitting ‘the jackpot’ – boosting her exposure and drawing in hundreds of new subscribers, she told Business Insider.

OnlyFans, a London-based content subscription service, allows creator to post content online and receive payment directly from their followers, or ‘fans’ via subscriptions or one-off tips.

The website has become increasingly popular for sex work, especially during the pandemic.

Prior to the incident, Finite, who is based in Montreal, had been earning about $7,000 a month and was charging $8.99 for a subscription. 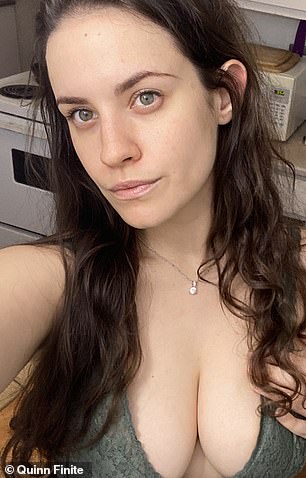 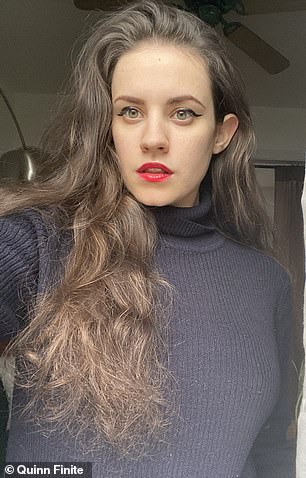 The tweets quickly went viral, boosting Finite’s exposure and drawing in hundreds of new subscribers. She is now on track to make $35,000 a month, she revealed 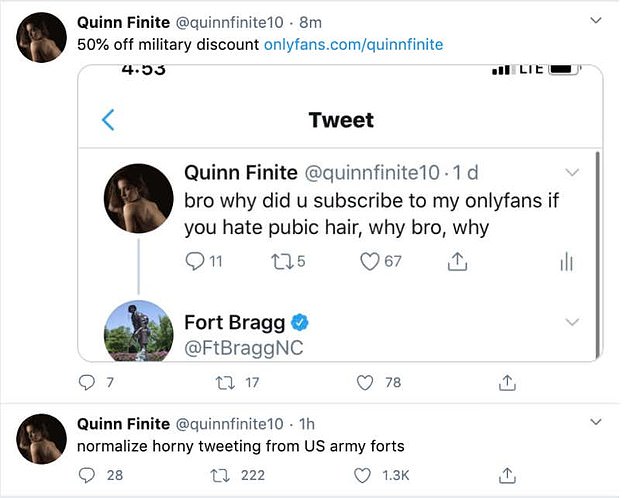 Within minutes, Fort Bragg’s explicit tweets blew up, with hundreds of users trolling the account

‘It was plenty to live off of, but now I kind of quintupled my income,’ Finite told the publication.

‘You can’t even pay for this kind of promotion. This is the jackpot,’ she added.

Thanks to the nature of the internet, Finite said she continues to see ‘waves’ of new subscribers.

Her fellow OnlyFans sex workers said the viral incident was comparable to ‘winning the lottery in terms of free promotion’.

‘What happened to Quinn was sort of a one-in-a-million chance. And honestly, I don’t think it could’ve happened to a better person,’ Jo Munroe said.

Finite, who launched her OnlyFans account during the coronavirus lockdown in May, said she is thankful to the anonymous fan behind the Fort Bragg Twitter account and hopes he ‘got let off easy.’

By the next morning, the 18th Airborne Corps, which shares a commander with a base, announced the Fort Bragg account’s initial explanation of hacking was bunk

‘I don’t think he’ll ever message me saying, “Oh that was me,” but it would be nice to hear from him,’ she told BI. ‘I never expected to have a military audience. It’s funny to me.’

The person behind the explicit comments is yet to reveal his identity and it is unclear if he was disciplined over the incident.

‘This morning, at the initiation of an investigation into yesterday’s incident regarding inappropriate tweets on the Fort Bragg Twitter account, an administrator for the account identified himself as the source of the tweets,’ the corps said in a tweet at the time. ‘Appropriate action is underway.’

After the inquiry started, a civilian worker came forward and took responsibility. He said he believed he was tweeting from his personal account, the official said. 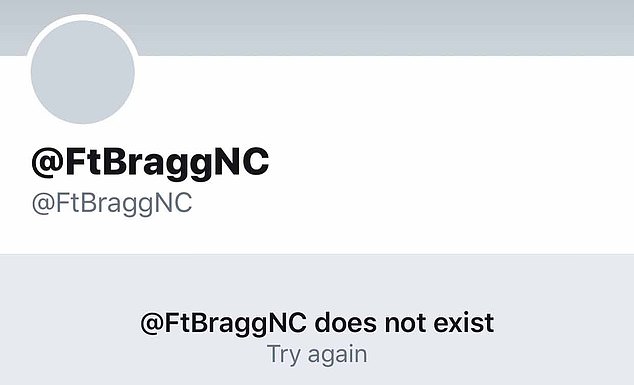 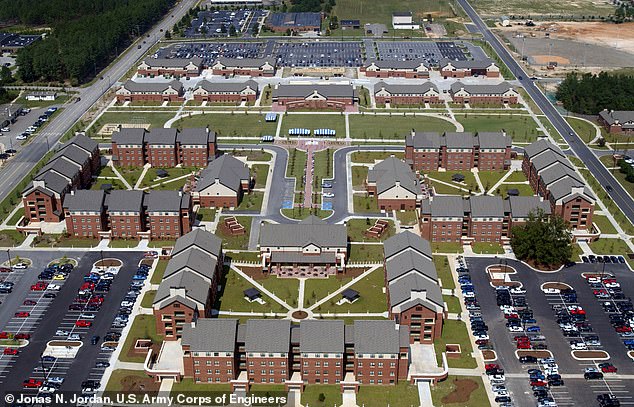 Fort Bragg (pictured) is one of America’s largest military bases, housing more than 50,000 military personnel. It is also the headquarters for the Army Special Operations Command, as well as the 82nd Airborne Division

Despite the base’s best efforts to remove the offending Tweets, other Twitter users were quick to save screenshots of them and share them online.

At the time, some had speculated online that they doubted the base’s claim that the account had been hacked, suggesting that an admin had not realized they were logged in to Fort Bragg’s account when making the posts.

But in a tweet before deleting the account, Fort Bragg denied that it was one of their social media admins.

‘As many of you know, there were a string of explicit Tweets from our account this afternoon. This was not the work of our admins,’ the tweet read.

‘Our account was hacked,’ they insisted, adding, ‘We apologize to our followers. We have secured our account and looking into the matter.’

Google is being strongly criticized for the departure of its well-respected co-founder of the ethical Artificial Intelligence (AI) division, amid a row over...
Read more

Mother is charged with murdering her newborn twins, whose bodies were...
Read more