Reporting by Guy Adams for The Daily Mail

The Mail revealed that between 2012 and 2014, Hunter worked as a sort of go-between for Rakishev, a self-styled ‘international businessman, investor and entrepreneur’ with close family connections to the kleptocratic regime of his homeland’s despotic former president Nursultan Nazarbayev.

In the UK, Rakishev is perhaps best known due to a bizarre 2008 episode when he’d helped a fellow oligarch chum called Timur Kulibayev use a firm registered in the British Virgin Islands buy a home from Prince Andrew: his Windsor mansion Sunninghill Park, which oddly went for £15million, some £3million over the asking price.

Coverage of the episode had noted that Kulibayev was the son-in-law of the aforementioned despot Nazarbayev, who ruled Kazakhstan for more than two decades, turning it into one of the world’s most corrupt kleptocracies.

Rakishev, for his part, is married to the daughter of a former mayor of the country’s capital city (recently re-named ‘Nursultan,’ after the elderly despot), who later served as its Defence Minister and Deputy Prime Minister. 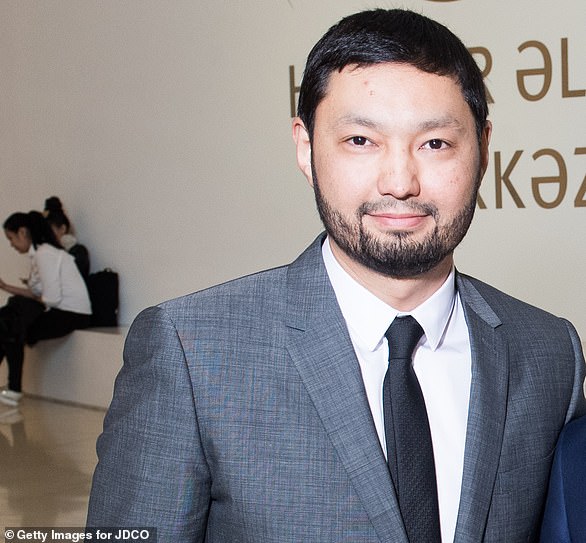 The Mail revealed that between 2012 and 2014, Hunter worked as a sort of go-between for Rakishev (pictured), a self-styled ‘international businessman, investor and entrepreneur’ with close family connections to the kleptocratic regime of his homeland’s despotic former president Nursultan Nazarbayev

Fast forward to 2012 and Rakishev had just joined Forbes magazine’s top-15 list of Kazakhstan’s ‘most influential’ tycoons, with estimated assets of some $332million. Like many an oligarch in possession of a huge fortune, Rakishev was now looking for a safe place to park it, so had come to America in search of new places to invest his hard-earned roubles.

To blame? The fact that no one was entirely sure where his wealth actually came from.

For example, the leaked emails obtained by the Mail show that the International Finance Corporation, a highly respectable sister organisation of the World Bank, held preliminary talks with Rakishev about a business collaboration, before deciding to pull out.

The IFC then politely informed the oligarch that it ‘cannot invest with him’ because its ‘very deep due diligence processes’ had established that he had some ‘connections’ involving the ‘president’s family’ that ‘are a liability to us’.

Seemingly outraged, Rakishev responded that he would ensure that the organization ‘never works in Kazakhstan with anyone.’

The United States Department of Justice then took an interest in Rakishev. It soon dragged him into an investigation of potential breaches the Foreign Corrupt Practices Act related to ‘an investment in the oil and gas industry in Kazakhstan’.

Though Rakishev immediately denied all wrongdoing, and no charges were ever filed, in September 2013 he decided to hire a notoriously expensive US law firm called Greenberg Traurig to deal with incoming fire related to the probe.

It seems that two attorneys who led a team working the Kazakh’s case, John Pappalardo and Stanford Saunders, charged him in the region of $1,000 and $700 per hour respectively.

It was, doubtless, a very annoying (and expensive) business; not to mention highly frustrating for a man who had perhaps grown used to getting his own way. Which is perhaps what persuaded him to take meetings with Hunter Biden, a member of one of America’s most powerful political dynasties.

In May 2012, he was emailed by Hunter’s business partner Devon Archer, a lawyer and former Abercrombie & Fitch model. ‘Can you have dinner with me, Hunter Biden, Alex [Forbes Kerry] and team on Wednesday next week in NYC? I want to let Hunter know when he should come up from DC to see you on Wednesday. Looking forward to seeing you!’

Rakishev replied: ‘Hi Devon! I would be happy to have a dinner with you and all our friends! Thank you very much for invitations! Take care my brother!’

By July, Hunter had travelled to Astana to discuss business opportunities. ‘I wanted to check in with you and see what our next steps are to follow up on our visit to Kazakhstan,’ he wrote in an email to Rakishev sent shortly afterwards. ‘Let me know if you need anything from me.’

Although the emails the Mail has seen show that the talks eventually broke down, he remained on friendly terms: ‘I wanted to reach back out to you and continue our conversations,’ Hunter wrote to Kulibayev on November 25, 2012.

‘I understand you and Timur evaluated PGRX but it was not a good fit at this time. Thank you for taking a look at it and for the quick feedback as well. Let me know when you’d like to connect.’

The duo remained in close contact throughout the following year, discussing a range of business ventures.

Then, in late October 2013, Biden’s partner Archer arranged a conference call between Rakishev and the aforementioned Alex Forbes Kerry, who was by then attempting to raise cash to launch a film production firm.

Immediately after the call that December, Rakishev emailed with happy news: ‘Thank you my brother from another mother! Thanks you very much my brother! We decided to invest 1 mln [million]! Give them my email!’

Forbes Kerry, who has never publicly acknowledged her debt to Rakishev, finalised the deal in January 2014. The following month, she and Biden met Rakishev for dinner in Washington DC.

‘It was a pleasure to meet you with Devon and Hunter the other day,’ she told him by email afterwards. ‘I want to thank you for the beautiful watch! I am sorry I didn’t open it at the table. I misunderstood and thought it was a baby present so I only opened it when I was at home. It is absolutely beautiful and you are so generous . . . Please come to New York soon and bring your family. We will host you and your team.’

Rakishev responded that he intended to take up that offer in September. ‘Let’s be in touch!’ he wrote.

Sadly, at the time of this happy exchange, Biden’s marriage was in the process of breaking down. Things culminated in a spectacularly hostile divorce in which his wife Kathleen claimed he had spent ‘extravagantly on his own interests (including drugs, alcohol, prostitutes, strip clubs, and gifts for women with whom he has sexual relations), while leaving the family with no money to pay legitimate bills’.

Bill Gates has warned that the next five months look 'pretty grim' for the United States unless COVID-19 cases, hospitalizations and deaths stop...
Read more

It's the perfect combination.This £180million (200million euros) superyacht isn't just ultra opulent, it's green too - perfect for eco-warrior billionaires. And it's something...
Read more

A Queens hospital that was overwhelmed with coronavirus patients in the spring has put out an urgent plea to recruit more nurses to...
Read more
Load more

Superyacht Ultra2 comes with two pools and an Imax cinema –...