Home U.S Photographer sues handlers of University of Texas' mascot after he was permanently...
U.S

A photographer is suing the owners and handlers of the University of Texas’ live mascot for negligence after the longhorn steer plowed into him ahead of a game last year.

Nick Wagner says he suffered permanent neck and back injuries when the 1,700 pound steer, named Bevo XV, charged out of its pen and into several people at the 2019 Sugar Bowl on January 1.

Wagner, who was then a photographer for the Austin American-Statesman, filed a petition Friday in Travis Country district court, the newspaper reported. 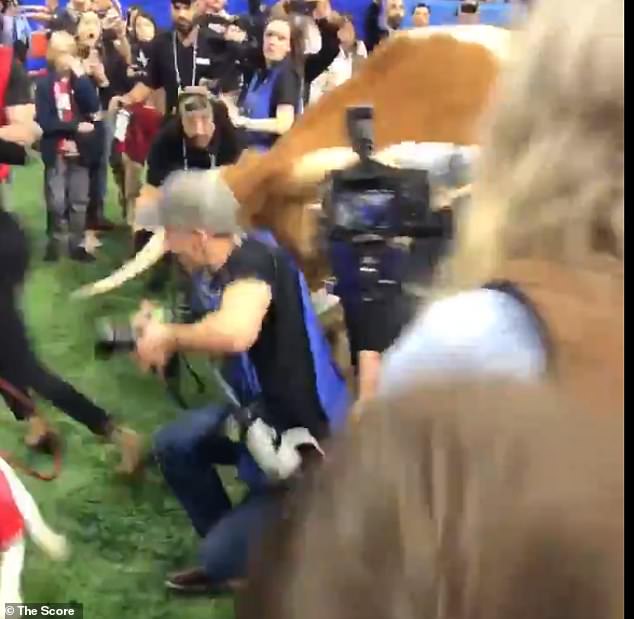 Photographer Nick Wagner says he suffered permanent neck and back injuries when University of Texas mascot Bevo XV charged out of its pen and into several people at the 2019 Sugar Bowl on January 1. His is suing the steer’s owners and handlers for damages 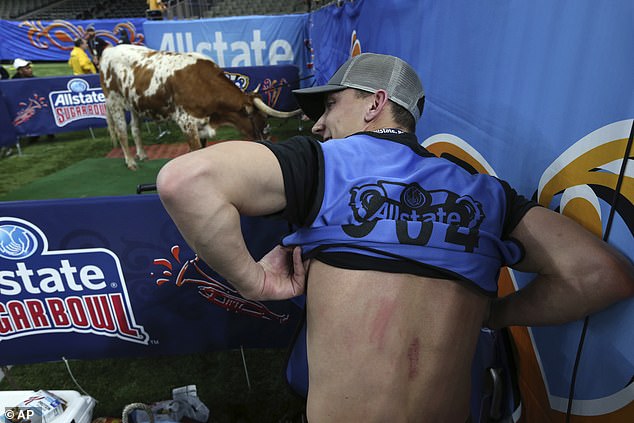 Wagner seen with his injuries before the game. He initially thought it was just a deep bruise but the pain never subsided and he has since racked up $24,000 in medical bills

According to the petition, Wagner was on one knee shooting photos of Georgia’s English bulldog mascot, Uga X, before the Texas-Georgia game at the New Orleans Superdome, when the steer charged at the dog.

Uga X was quickly pulled out of harm’s way, but the steer’s head and horns appeared to make contact with several people, including two photographers.

‘Bevo XV rammed his longhorns twice into Plaintiff’s back causing permanent injury to Plaintiff’s neck and back,’ the petition says.

Wagner, who left the newspaper in May, wants a jury trial and is seeking damages of $200,000 to $1million.

John and Betty Baker, Bevo’s owners, are named as defendants along with the Silver Spurs Alumni Association. 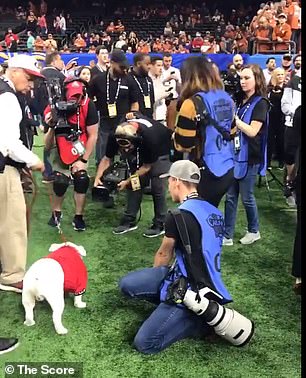 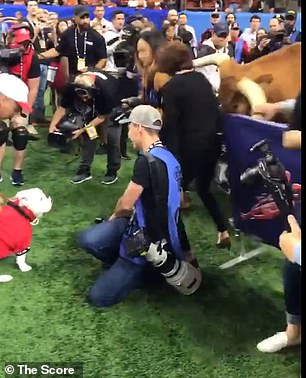 Wagner was on one knee shooting photos of Georgia’s English bulldog mascot, Uga X, before the Texas-Georgia game at the New Orleans Superdome, when the steer charged at the dog 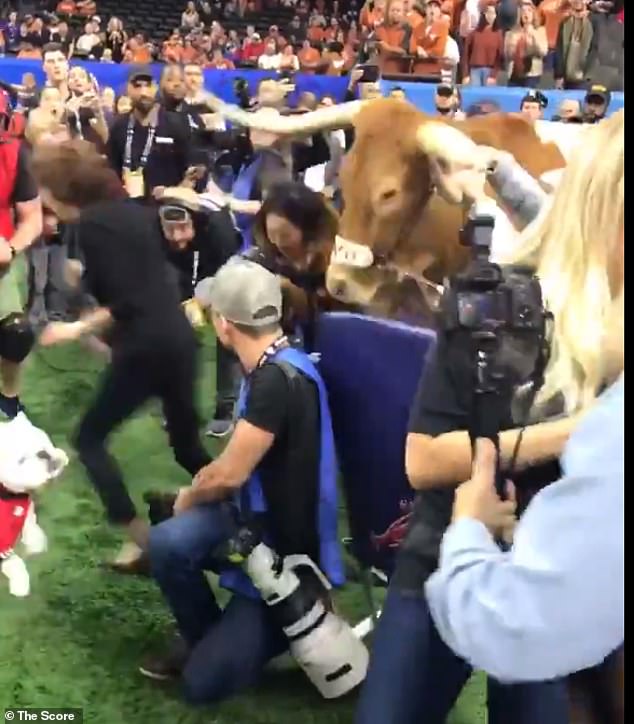 The group is in charge of handling the 1,700-pound steer, which has been the mascot for the University of Texas since the start of the 2016 season.

Wagner claims that they failed to properly care for the animal, leading to his injuries.

The suit states they ‘failed to take proper safety precautions’ and used ‘faulty equipment’ when handling the steer.

It also claims that the Bakers knew that Bevo’s handlers ‘were unfit or not competent, but still allowed them to handle Bevo XV and subsequently failed to supervise them,’ according to the Statesman.

‘There’s no doubt that you don’t want to have Bevo run into your back,’ Wagner’s attorney Jon Powell said. 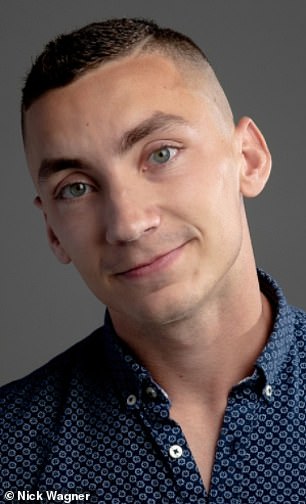 ‘He was just trying to do his job as a photographer, and it’s up to the handlers to make sure he doesn’t get out of control. Luckily, he didn’t get mauled or anything like that, but he did suffer a tough injury.’

Video footage of the incident was caught from several angles showing Wagner taking the brunt of the force from Bevo.

He had been shooting the Longhorns for two years before this and had never had such a close encounter.

‘He got me, I don’t know with his horn or what, in the back, then he got me with his right horn,’ Wagner told KVUE. ‘The hook, I got hooked.’

He added that although he was able to run away, once the adrenaline wore off and he was sitting down to edit photographs, the pain began.

Initially just thinking it was a deep bruise, the pain never subsided.

Medical documents show Wagner suffered ‘loss of motion’ and ‘impairment’ in two areas of his spine.

It included a ligament injury to his lower back which will heighten his risk of arthritis when he is older.

‘The lumbar spine motion x-rays that diagnoses the injury to the L1, L2 area of the spine and at the bottom of that It also has an over 20 percent disability rating now for Nick,’ Powell said.

‘So, it’s a permanent and sustained injury to his back.’ 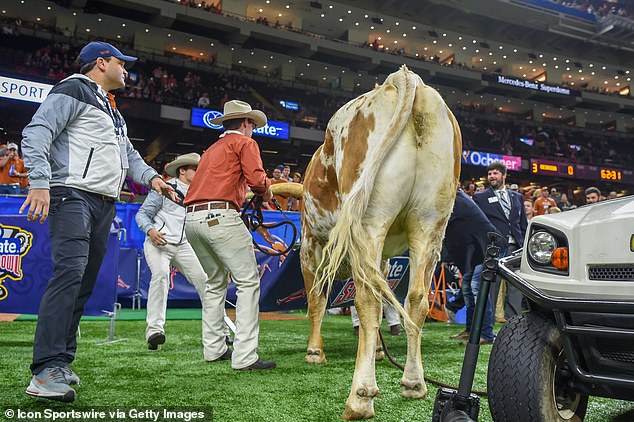 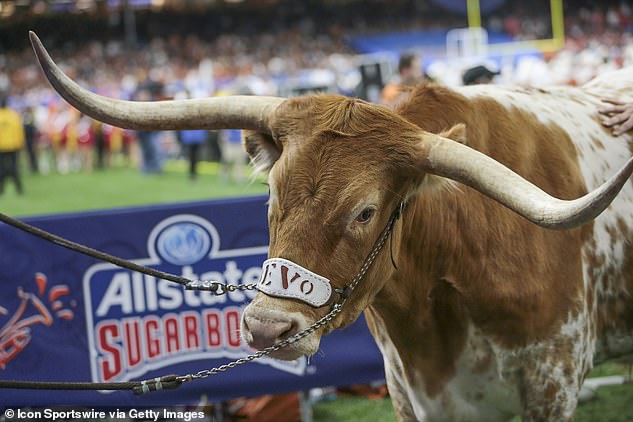 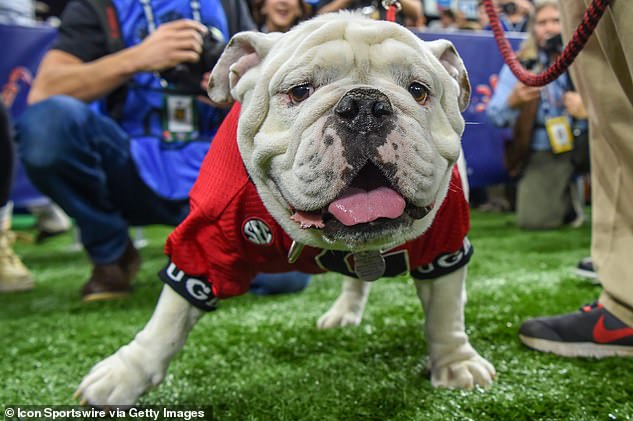 Wagner was only 24 years old at the time of his injury and claims that he was laid off by the newspaper last year.

‘You never want to hear you could have a debilitating injury for the rest of your life. But that’s reality. I’ve said it before, if I could trade this lawsuit for not having to endure the strike and the pain I would do it 100%, in a heartbeat,’ said Wagner.

Powell said Wagner has wracked up more than $24,000 in medical bills.

They include a $7,000 injection aimed to heal his lower back pain faster, according to CBS Austin.

The Silver Spurs Alumni Association carries a liability policy with Cincinnati Insurance and the photographer reached out about payment n November 2019.

But Wagner’s claims for repayment of his medical bills have been met with ‘radio silence,’ Powell said.

‘There’s been no response at all for over a year that they’ve known about his injuries and his medical treatment I think that’s really frustrating and unfair.’

‘The reality is, the incident did happen. Bevo struck me. And now I’m living through the pain that has been caused my that accident,’ Wagner added.

The Bakers have owned the last three UTR mascots according to KVUE.

They also train the animal’s handlers how to keep him calm without using sedatives.

‘They’re interesting animals and they respond in kind. You treat them good, they treat you good,’ John T. Baker said. ‘There’s never been one cc or one milliliter of any type of medication given to any sunrise steers since 1988.’

Bevo continues to attend games but his pen has been substantially renovated to keep him contained.

Wagner told KVUE that despite his injuries, he has no hard feelings toward the mascot.

‘I hope this doesn’t change anything about him whatsoever because he’s Bevo, he’s a staple of Texas football games,’ he said last year.

‘The crowd and the players alike really feed off of him. When he gets shown on the big screen and has the spotlight on him, the whole place gets rockin’, DKR gets turned up and the players feed off of that, so it adds to the experience that is Texas football.’

The Democrat preacher contesting Georgia's pivotal Senate run-off was embroiled in an extraordinary years-long legal tussle with an elderly parishioner who demanded to...
Read more
U.S