Plants have an upper hand in the ecological battle against insects by using ‘odour camouflage’ to ‘hide in plain sight’ and avoid being eaten, scientists say.

Trees, herbs and shrubs are known to communicate with each other by emitting odorous chemicals called volatile organic compounds (VOCs).

These smells serve as vital information to insects such as caterpillars that eat plants, as it can help them distinguish between edible and toxic or otherwise harmful plants.

But plants are able to fool insects by sharing many common odours across different species in the community, thus enabling them to ‘hide’, despite still being visible.

This clever technique, discovered by a team of biologists, means insects have to play catch-up and ‘evolve to be finer tuned’ to find the right food. 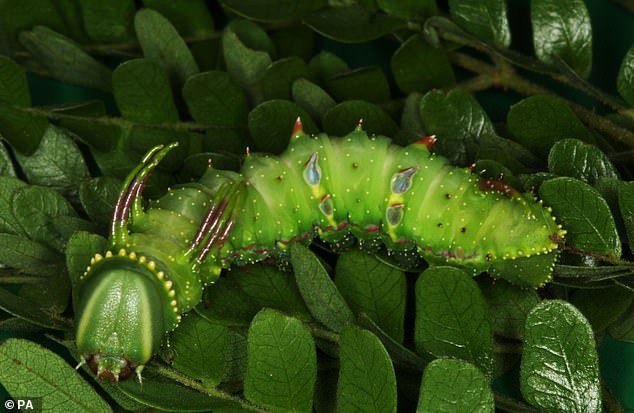 Plants appear to have the upper hand in the ecological battle against insects by using odour camouflage tricks to ‘hide in plain sight’, scientists have found. Photo of an Adeloneivaia caterpillar in the Chamela-Cuixmala tropical dry forest in Mexico

‘Plants produce a profuse diversity of odour compounds – the natural chemicals that make plants smell,’ said Professor Phil Stevenson, senior research leader at the Royal Botanic Gardens, Kew, and co-author on the research, which was undertaken in a Mexican forest.

‘For some plants, like culinary herbs, these are distinct – we can easily distinguish oregano from rosemary by decoding the information (odours) they share, and specifically distinguishing the ones that make them smell different to other plants.

‘In a similar way, insect herbivores, as recorded in this study, detect odours to identify and locate suitable plants for food. 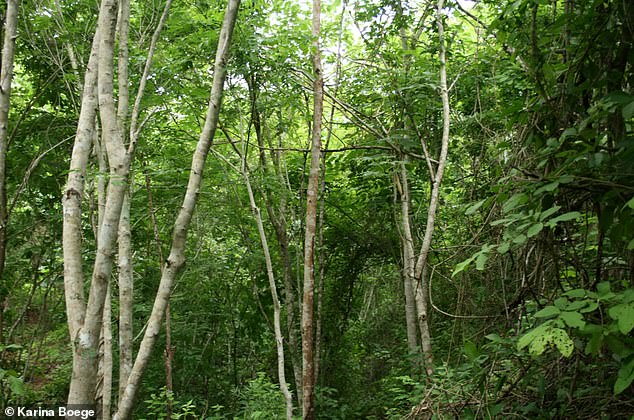 Image of the Chemela tropical dry forest in Mexico. During the rainy season of 2018, the researchers searched comprehensively for insect larvae and their respective plant food

‘Easily distinguished odours are to the herbivores’ advantage and plants’ disadvantage.’

This results in an ‘information arms race’, Professor Stevenson said – plants want to avoid being located and eaten, meaning they ‘do their best’ to smell like other plants as a form of cunning disguise.

‘The herbivores, on the other hand, want to find food as easily as possible so evolve to detect very minor differences in plant odours in complex plant communities,’ he said.

Previous research has suggested herbivores insects are ‘specialists’ – they are adapted to munching on specific plants, and so use the VOCs to find their favourite meal.

The transmission of chemical information between plants and insects in ecological communities remains poorly understood, as most related studies have focused on a limited number of model species in controlled environments.

Therefore, the team collected field data on insect-plant interactions and the associated plant VOC in Chamela, a tropical dry forest in Mexico.

Tropical dry forests host a large number of interacting and co-evolving plant and butterfly species and are regarded as biodiversity hotspots. 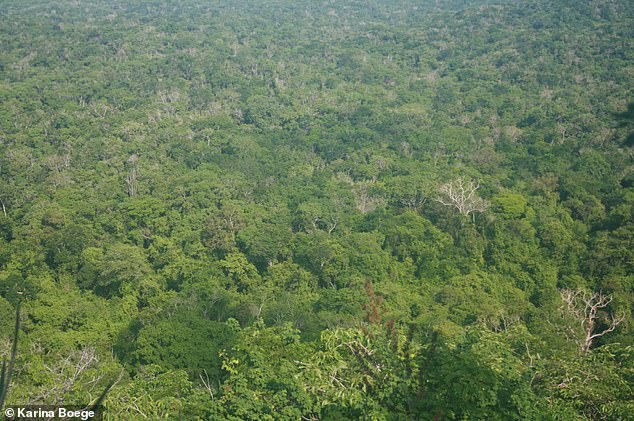 The Chemela tropical dry forest, home to an ecosystem of herbivorous insects and plants that send out confusing chemical signals

This setting allowed them to identify and study patterns of information transfer between the communities.

During the rainy season of 2018, the researchers searched comprehensively for larvae on leaves of target plants, which they reared in the laboratory with leaves collected from their host plant species to confirm their ‘trophic interaction’.

The scientists recorded interactions between plants and herbivorous insects such as butterflies and moth caterpillars.

The findings suggest that the on-going ‘information arms race’ process drives the co-evolution of insect-plant ecology and the large diversity and sometimes redundant VOCs observed in plants.

Where insects have the evolutionary advantage of being able to identify and make use of the few most informative VOCs, plants can in turn respond by adding more VOCs to their profile, increasing the ‘chemical noise’ surrounding them. 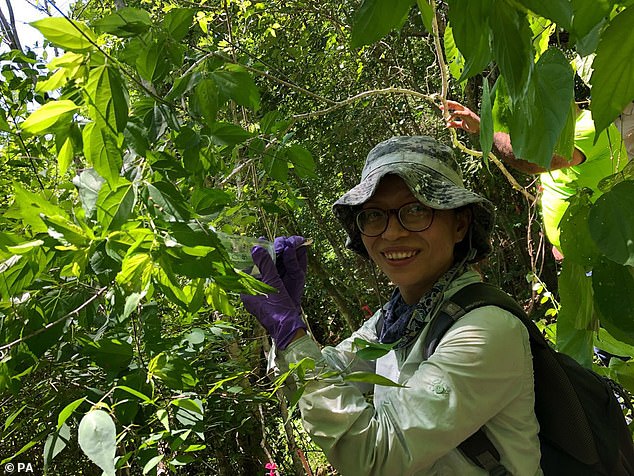 ‘Here, for the first time, we now know that all the chemicals produced by plants carry information which has an important role in chemically camouflaging plants in a complex plant community,’ said Pengjuan Zu, post-doctoral researcher at MIT and lead author of the study.

‘Herbivores, consequently, have to evolve to be finer tuned with the information for locating specific plant hosts.’

Under the same process, herbivores themselves can also be identified using a set of informative VOCs, which may be used by parasites and predators of the insects themselves.

The research is published in the journal Science.

HOW TO PREVENT YOUR PLANTS FROM BEING EATEN BY INSECTS

There are several precautions that plant owners can take to decrease the chances of having to deal with hungry insects:

– Provide a plant with the growing conditions that it needs so that it is more likely to grow vigorously. Stressed plants tend to be more susceptible to pests.

– Before buying or bringing a plant indoors, always check it and its container for signs of pests.

– A plant that has been outside for the summer, especially one sitting on the ground, may have pests that have crawled in through the drainage holes. Take the plant out of the pot to examine the soil.

– Isolate new plants from plants already in the home for six weeks to ensure that any pest brought in will be less likely to spread.

– While plants are isolated, carefully examine them for signs of pests or damage about once a week. Pay particular attention to the undersides of leaves.

– When repotting a plant, use commercially prepared potting soil rather than soil from outdoors, which can be a source of pests.

Germany crisis: Brexit no deal collapse would be 'DISASTER' for Merkel

Germany crisis: Brexit no deal collapse would be 'DISASTER' for Merkel