The Pokémon Company has announced a new augmented reality app designed to help kids learn how to brush their teeth.

Called Pokémon Smile, the app is available now for iOS and Android devices and will work like Pokémon Go only with daily toothbrushing sessions substituted for walks.

To use the app, kids place a smartphone or tablet on the bathroom counter so that the camera can record them while they brush their teeth. 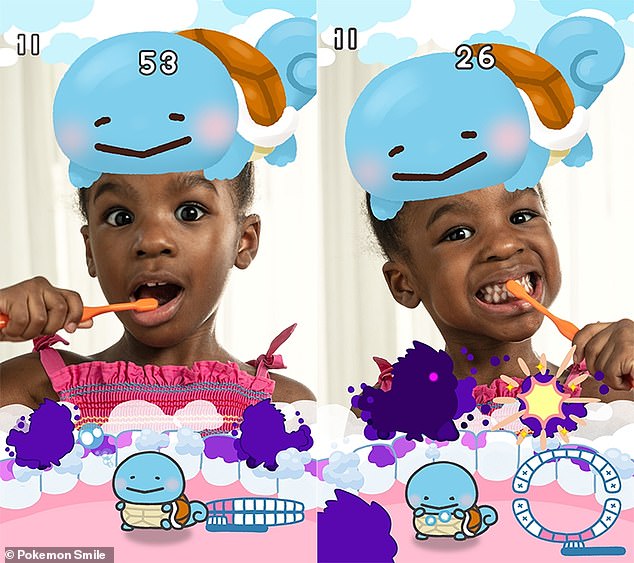 The Pokémon Company has released a new app for iOS and Android called Pokémon Smile, intended to help kids develop good tooth brushing habits by rewarding them with new Pokémon

A digital mouth is displayed on the bottom of the screen, with shadowy Pokémon silhouettes depicted hiding in certain teeth, which the kids can reveal by brushing a certain number of times in the indicated location.

Each day brings a new selection of Pokémon, and every creature they free during brushing can be captured and added to their collection, according to a report in Engadget.

There will be 100 Pokémon available to start, and as with Pokémon Go, the company will add to the roster over time.

When not brushing, kids can unlock digital hats to place over their heads while they’re brushing, each aligned with a different Pokémon character.

The app will also let kids take pictures of themselves while brushing, which they can send to friends or family members through the app. 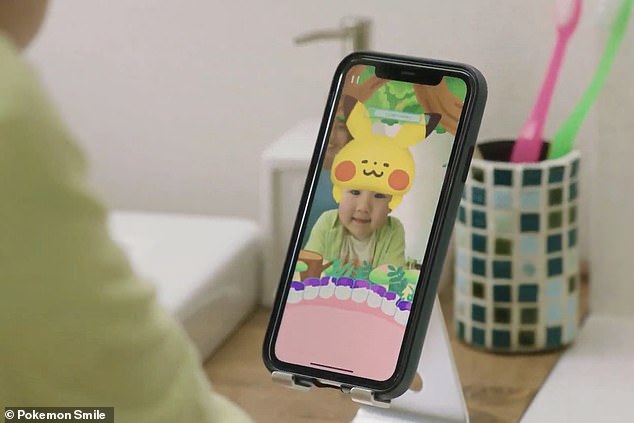 Pokémon Smile will come with 100 Pokémon at launch, which are depicted as silhouettes hiding in between certain teeth that kids can unlock by brushing in the targeted area

The announcement is part of the Pokémon Company’s ongoing efforts to develop a set of lifestyle products and services that build on the success of Pokémon Go.

According to the initial announcement, the app was planned to use smartphone accelerometers to track the amount of time a person tosses and turns during the night and to quantify how much REM sleep they get. 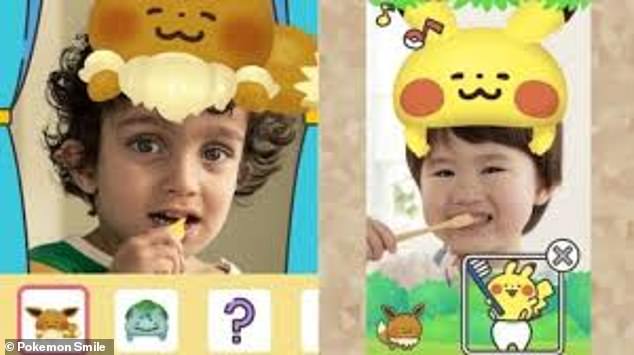 The company didn’t elaborate on how this data would be used in gameplay, and the the app still hasn’t been released suggesting The Pokémon Company might still be unsure itself.

For video game traditionalists, the company has also announced a new Nintendo Switch game, New Pokémon Snap, though no release date or price point was given.

The game is a sequel to the popular Nintendo 64 game that casts players as a photographer on a mission to photograph as many Pokémon in the wild as possible.

THE RISE OF POKEMON

The Pokemon Company was set up with investment from gaming companies Nintendo, Game Freak and Creatures. Spanning products including videos games, movies and soft toys, Pokemon is a home-grown contender for a Disney-style pop culture empire.

The first two Pokemon titles launched on the Nintendo Game Boy handheld console in 1996. Since then, the game series has sold more than 340 million units worldwide.

Pokemon’s global appeal is reflected in the success of movie ‘Pokemon Detective Pikachu’, which has taken more than $120 million at box offices in North America. The move features the yellow Pikachu character – often the face of Pokemon – as a Sherlock Holmes-like crime-buster, complete with deerstalker.

A sequel to the Detective Pokemon game for the Nintendo 3DS handheld console will be released for the Switch, the Pokemon Company said.

Pokemon’s success comes as Nintendo expands the range of outlets for its popular characters, with Italian plumber Mario to feature at a Nintendo-themed land under construction at Osaka’s Universal Studios Japan theme park.

There is no such thing as 'he's just not my type', scientists say

5 things to know before the stock market opens Tuesday

SNP calls for Nicola Sturgeon to RESIGN laid bare: ‘Out of...