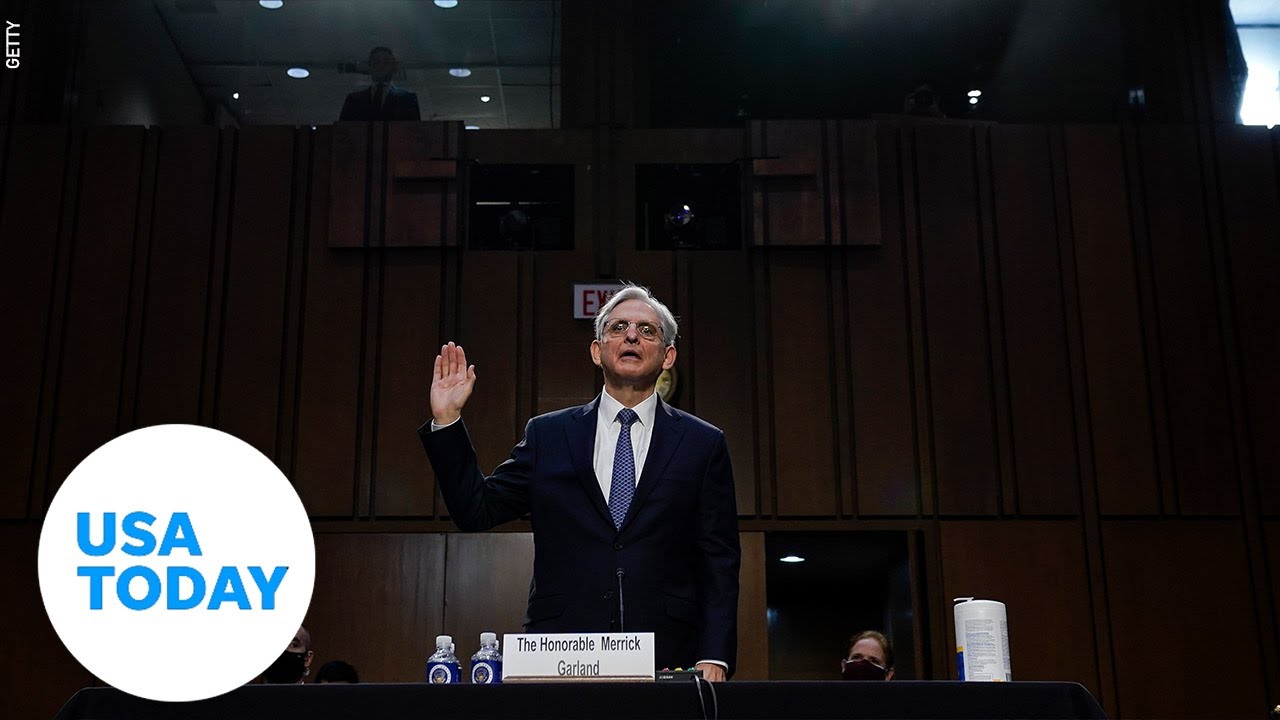 Attorney general nominee Merrick Garland said that President Joe Biden has pledged that he would not intervene in Justice Department investigations, indicating that he expected the department would remain free from partisan political interference.

Garland pledged that Justice investigation would proceed “without regard for partisanship” or the political influence of subjects of those investigations.

“I am a strong believer in following the processes of the department,” Garland said, adding that he “respected” the authority of the department’s inspector general to investigate possible misconduct.

As one of his first acts, if confirmed, Garland said he would meet with prosecutors and pledge to provide all the resources necessary to push the inquiry forward.

“This was the most heinous attack on democratic processes I’ve ever seen,” Garland told the Senate Judiciary Committee.

Garland said he would urge investigators to examine “more broadly” the origins of the attack and determine the risk of future assaults.

Garland: No talk with Biden about son’s investigation

“I have not,” Garland said. “The president made abundantly clear in every public statement before and after my nomination that decisions about investigations and prosecutions will be left to the Justice Department.”

Hunter Biden announced in December that the U.S. attorney in Delaware was investigating his taxes. Republicans have questioned his business dealings in Ukraine and China, but the president has stood behind his son.

Attorney general nominee Merrick Garland told lawmakers that he had “no reason” to question the status of the special prosecutor leading a continuing investigation into the origins of the Russia investigation.

If confirmed, Garland said he intended to meet with prosecutor John Durham, who was appointed by former Attorney General William Barr.

The Biden administration has pledged to allow Durham to complete the investigation.

Attorney general nominee Merrick Garland said the country faces a “more dangerous period” than the forces that sparked the Oklahoma City bombing, which still stands as the most deadly domestic terror attack in U.S. history.

“I am proud of the work that was done in California to build a very inclusive democracy and accessible democracy,” Padilla said. “I’m also reminded that, look, the voter suppression is rooted in white supremacy.”

Garland: Role of AG is to ‘serve the rule of law and ensure equal justice’

Attorney general nominee Merrick Garland on Monday called for a restoration of Justice Department “norms” as guardrails against the influence of partisan politics that have threatened the agency’s independence from the White House.

Garland, testifying at his confirmation hearing before the Senate Judiciary Committee, also vowed to pursue equal justice for marginalized communities of color while leading a battle against extremism that broke into the open during last month’s deadly Capitol attack.

to ensure equal justice under the law.”

Garland, a former top Justice official who last served in that department during the Clinton administration, said he would reaffirm a host of standards including those that “strictly regulate communications with the White House.”

President Joe Biden has described his selection of Garland, now a federal appeals court judge, as an attempt to turn the page at a department roiled by politics and efforts by former President Donald Trump to use the institution to advance his political interests.

The top Republican on the Judiciary Committee, Sen. Chuck Grassley, said Monday at Merrick Garland’s confirmation hearing to become attorney general that he was unapologetic about refusing to hold a hearing on Garland’s 2016 nomination to join the Supreme Court.

Former President Barack Obama nominated Garland after the death of Justice Antonin Scalia in February 2016. But Republicans who controlled the Senate refused to consider the nomination during an election year.

“As you’ll recall, it was an election year with a divided Congress,” said Grassley, who said the decision was consistent with Democratic statements.

Democrats, including President Joe Biden, railed against the stonewall. But the vacancy was eventually filled by former President Donald Trump with Justice Neil Gorsuch.

“Yes, it’s true I didn’t give Judge Garland a hearing,” Grassley said. “I also didn’t mischaracterize his record. I didn’t attack his character. I didn’t go through his high school yearbook. I didn’t make his wife leave the hearing in tears. I took a position and stuck to it. That’s it.”

Grassley: Garland ‘a good pick for this job’

“No one doubts that Judge Garland is qualified” to lead the Justice Department, Grassley said.

Garland to have ‘solemn responsibility’ to lead Capitol inquiry

“You know what it’s like to confront the specter of domestic terrorism,” Durbin said, recalling Garland’s past oversight of domestic terror investigations. “You led the investigation and prosecution of the Oklahoma City bombing and, in doing so, helped make this nation safer and bring some measure of peace and healing to the victims and their families.

“I am confident, given this prior experience, that you are up to the task that the Department now faces in the wake of January 6th. In fact, I can think of no one better suited. I look forward to hearing,” he said.

In a stark opening statement at Garland’s confirmation hearing, Durbin, the Illinois Democrat, said the nation “looks to you” to restore department independence.

“Judge Garland, should you be confirmed — and I have every confidence that you will be — you will oversee a Justice Department in an existential moment,” Durbin said. “After four tumultuous years of intrigue, controversy, and brute political forces, the future course of the Department is clearly in transition.

“Under Attorney General Jeff Sessions and his successor, Bill Barr, the Justice Department became an arm of the White House, committed to advancing the interests of President Trump, his family, and his political allies,” he said.

Sen. Richard Blumenthal told reporters before Merrick Garland’s confirmation hearing that he expected the appeals-court judge to restore integrity at the Justice Department, if confirmed as attorney general.

“Merrick Garland will bring a luster of integrity and common sense to the Department of Justice, which has been lacking for the past four years,” said Blumenthal, D-Conn. “I’m hoping what we’ll see is a commitment to crack down on violent extremism and on racial injustice.”

Sen. Dick Durbin, the chairman of the Judiciary Committee, said Monday he expected Merrick Garland to be confirmed as the next attorney general, but first the panel scheduled a two-day hearing on his nomination.

“He has a big job to do,” Durbin, D-Ill., told reporters before the hearing. “First, he must restore the morale and the integrity of the Department of Justice. He is the man for the job.”

When asked about how Garland would handle lingering investigations from the Trump administration, Durbin said he trusted the judgment of the federal appeals judge.

“There are many people who want him to engage in a political agenda I think that will not be his priority,” Durbin said. “His priority is first the investigation on the January 6 mob invasion of this Capitol. And secondly, really moving us forward as a nation to restore the values the department of Justice always stood for.”

In his prepared opening statement, Garland vows to “protect the independence of the department from partisan influence” after four years in which critics assailed President Donald Trump for regularly venting his opinions on ongoing investigations, particularly ones involving himself and his allies.

Garland also pledges to prosecute the “white supremacists and others” who stormed the U.S. Capitol on Jan. 6 in what he calls “a heinous attack that sought to disrupt a cornerstone of our democracy.” And, arguing “we do not yet have equal justice,” Garland promises in his statement to continue the Civil Rights Division’s mission to protect the rights of the “most vulnerable members of our society.”

Though his eventual confirmation is expected, Biden’s nominee will likely face questions about how he would maintain the DOJ’s independence amid lingering questions over Trump’s alleged role in inciting the Jan. 6 riot, an ongoing federal tax investigation involving the president’s son Hunter Biden and the pending inquiry into the origins of the Russian investigation led by Connecticut federal prosecutor John Durham.

Dominion Voting Systems has sued MyPillow Inc. CEO Mike Lindell, alleging $1.2 billion in damages to its brand for defamatory comments Lindell repeatedly made about the firm.

The complaint accuses Lindell of perpetuating a “Big Lie” about Dominion’s role in the 2020 presidential election, including that he knowingly spread false information about how Dominion’s voting machines conduct audits, investments from foreign countries and its presence in U.S. voting systems.

Lindell “knowingly lied about Dominion to sell more pillows to people who continued tuning in to hear what they wanted to hear about the election,” the complaint alleges.

After Dominion first indicated it might sue him, Lindell amplified his allegations against the company in a documentary he published about the company, amplifying multiple pieces of misinformation.

“Instead of retracting his lies, Lindell — a multimillionaire with a nearly unlimited ability to broadcast his preferred messages on conservative media — whined that he was being ‘censored’ and ‘attacked’ and produced a ‘docu-movie’ featuring shady characters and fake documents sourced from dark corners of the internet,” the complaint reads.

Conspiracy theories about Dominion and other election security firms circulated widely in the aftermath of the 2020 election. Dominion joins voting systems firm Smartmatic, which recently filed a $2.7 billion lawsuit against Fox News, in taking legal action against major right-wing media personalities for spreading misinformation about the 2020 election.

Sen. Susan Collins, R-Maine, announced Monday morning that she will not vote to confirm President Joe Biden’s nominee to run the Office of Management and Budget, Neera Tanden.

“Neera Tanden has neither the experience nor the temperament to lead this critical agency. Her past actions have demonstrated exactly the kind of animosity that President Biden has pledged to transcend,” Collins said in a statement.

Tanden, a veteran of Democratic politics who most recently served as the president of the Center for American Progress, a liberal think tank, has come under fire in the confirmation process for her past tweets criticizing Republicans and some progressive Democrats.

More:Why Biden is standing firm on budget pick Neera Tanden despite pushback from left and right

For instance, Tanden has called Collins “the worst,” “a fake defender of Roe v. Wade” and accused her of “flat out deception” for her vote to confirm Supreme Court Justice Brett Kavanaugh.

“I did not know her – much about her – but I’ve heard that she’s a very prolific user of Twitter,” Collins told reporters in November.

Biden needs at least one Republican to vote in Tanden’s favor for his nominee to be confirmed after Sen. Joe Manchin, D-W.Va., announced last week that he would be voting against her.

Biden, Democrats take up COVID-19 relief this week. Here's what we know

Attorney general nominee Merrick Garland said that President Joe Biden has pledged that he would not intervene in Justice Department investigations, indicating…

BORIS JOHNSON has been warned about a third Covid wave, with his Chief Scientific Adviser saying modelling shows a faster exit from…

WASHINGTON – After an attack at the U.S. Capitol and a historic impeachment trial, Congress is back to legislating.   Lawmakers’ primary focus this week will be President…

BORIS JOHNSON has been warned about a third Covid wave, with his Chief Scientific Adviser saying…

WASHINGTON – After an attack at the U.S. Capitol and a historic impeachment trial, Congress is back to legislating.  …