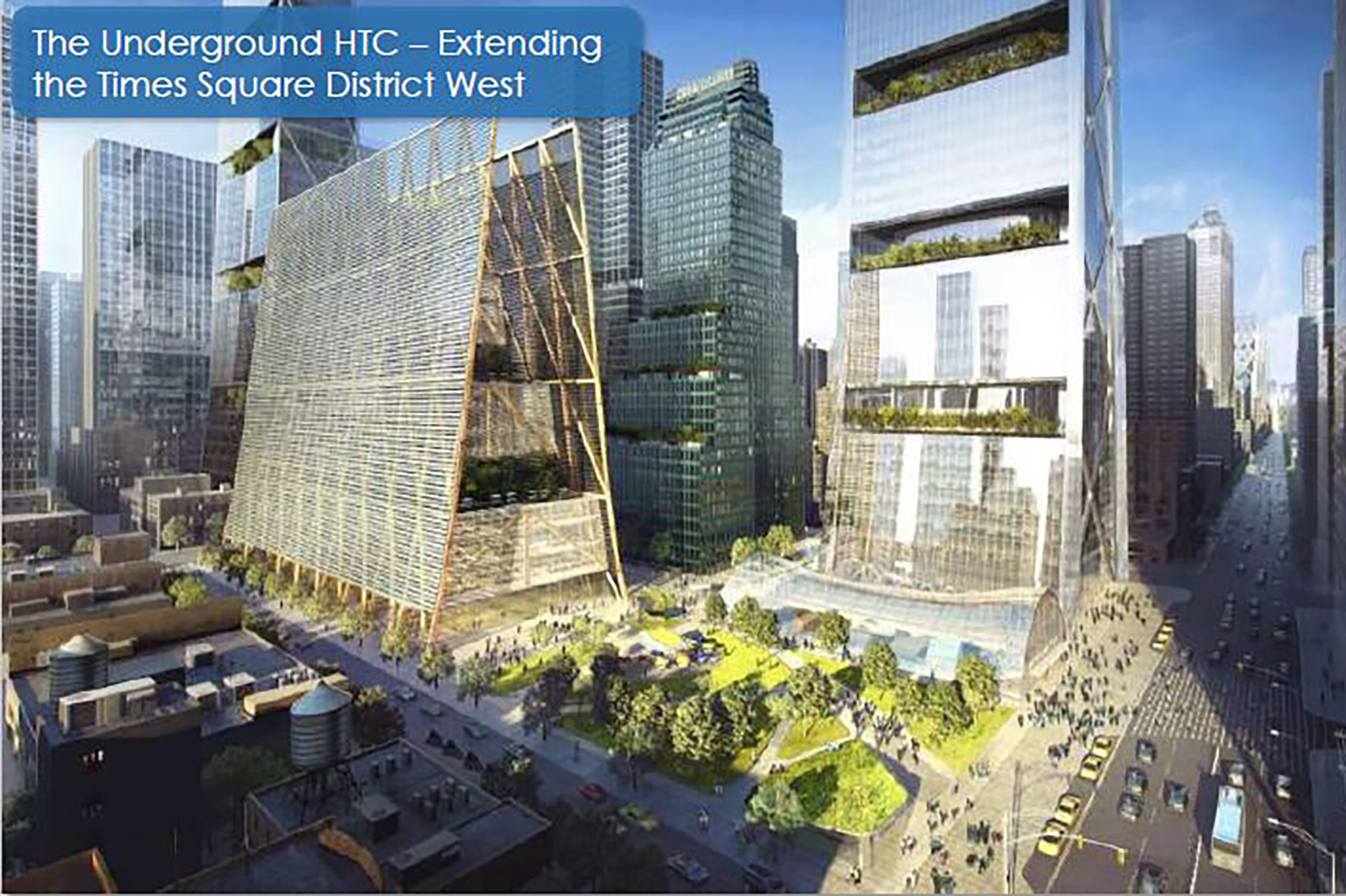 It’s a bury good way to get rid of the city’s most hated transit hub.

Many of the 250,000 commuters who use the Port Authority Bus Terminal on Eighth Avenue daily would love to see the ugly, inefficient facility disappear. An audacious replacement proposal submitted by a major engineering and design firm would give them their wish by moving it underground.

But the public never heard about it — until now.

The PA is considering three alternatives for either modernizing the terminal and putting an office tower on top of it, or partly moving it into the remote Javits Convention Center.

Now, The Post has exclusively obtained images of a plan by global infrastructure giant AECOM and architectural firm STV to bury the terminal underground in a “soaring public space” renamed Hudson Terminal Market with stores, cafes and connections to the No. 7 and Eighth Avenue subway lines.

A grand, glass roof would bring in sunlight. New tunnels near the Lincoln Tunnel entrance would bring buses directly into the subterranean terminal and eliminate the ugly tangle of overhead ramps. The block of West 41st Street between Eighth and Ninth avenues, which the terminal straddles, would be closed to create a “superblock” bounded by the avenues and by West 40th and 42nd streets for a landscaped public park and new office or apartment towers.

AECOM submitted its vision to the PA in 2019. The money-hemorrhaging agency nixed it for the other scenarios because they’d each cost an estimated $10 billion compared with $15 billion for the sunken-terminal plan.

But some analysts say AECOM’s plan could now become much cheaper thanks to a Trump administration initiative to stimulate new development.

Proponents say the project could be financed at little or no cost to the PA by tapping near-zero-interest federal loans to spur development as part of recovery from the COVID-19 crisis.

“[Commerce Secretary] Steve Mnuchin has basically said, ‘Show us good investments and we’ll mark the interest down to near-zero,’ ” noted an executive familiar with the bus terminal idea. Borrowers would commit to paying the Feds back over 30 years.

Insiders said AECOM’s task force for the terminal project was led by former PA executive director Christopher Ward, who was the design company’s New York-area CEO until he left the firm in 2018. Ward, who was at the PA from 2008-2011, rescued the agency’s stalled World Trade Center redevelopment project and was credited with breaking a stubborn logjam.

The terminal plan involves what real-estate professionals call “a million moving parts.” Among other things, it would require a city-state development agency to mastermind the project for the PA.

A “big box” to contain the new bus terminal and passenger amenities would first be built beneath the current terminal. It would be installed before the above-ground building is demolished.

The city, which owns the land, and the PA could profit down the line by selling air rights to developers who would build on parts of the superblock to be determined. The site is zoned for about six million square feet of development without needing public review. New towers there would effectively extend the Times Square district west beyond its current boundary of Eighth Avenue.

No one involved could be reached over the Labor Day holiday weekend.

Brexit deal on BRINK: EU fears UK will leave with no...

Brexit deal on BRINK: EU fears UK will leave with no...