Quawan Charles is filmed on surveillance cameras leaving his home

Police have released surveillance footage of Louisiana teenager Quawan Charles leaving his home on October 30 with a mother and son who were the last known people to see him alive.

Quawan, 15, was found dead in a sugar cane field on November 3, four days after he vanished from his parents’ home in Baldwin, Louisiana.

The teenager’s face was badly mutilated and half of his lips were gone. Two preliminary autopsies have given drowning as the likely cause of death.

His family, however, believe foul play was involved and that police are not properly investigating.

Now, police have released surveillance footage which shows Quawan leaving his home and getting into a car.

Police have not named them but Quawan’s family say the car belongs to Janet Irvin, the mother of Quawan’s friend Gavin. 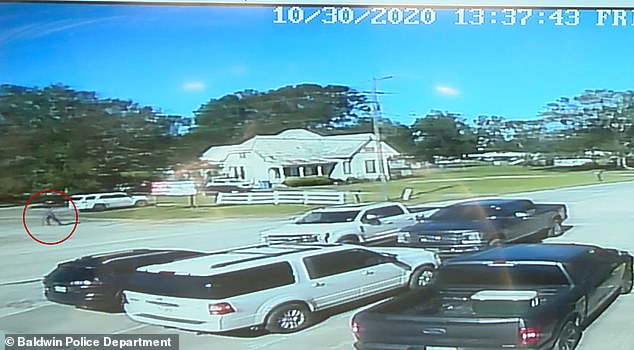 Gavin, 17, is believed to have gone to school with Quawan and the pair were friendly but Quawan’s parents say they didn’t know him.

The video shows Quawan chasing the car down once it passed him.

The vehicle returns then the two people inside ans Quawan are shown walking to his backyard before returning to the vehicle and driving off together.

Quawan’s family say they never gave him permission to go with the pair and that they do not know them.

They also say the Irvins – who have not spoken publicly about the case –  told them that Quawan left their trailer later that afternoon and that they don’t know where he went.

Neither of the Irvins have been arrested or otherwise implicated in the teenager’s death.

Quawan’s father called 911 at 8.30pm to report him missing but nothing was done to find him. 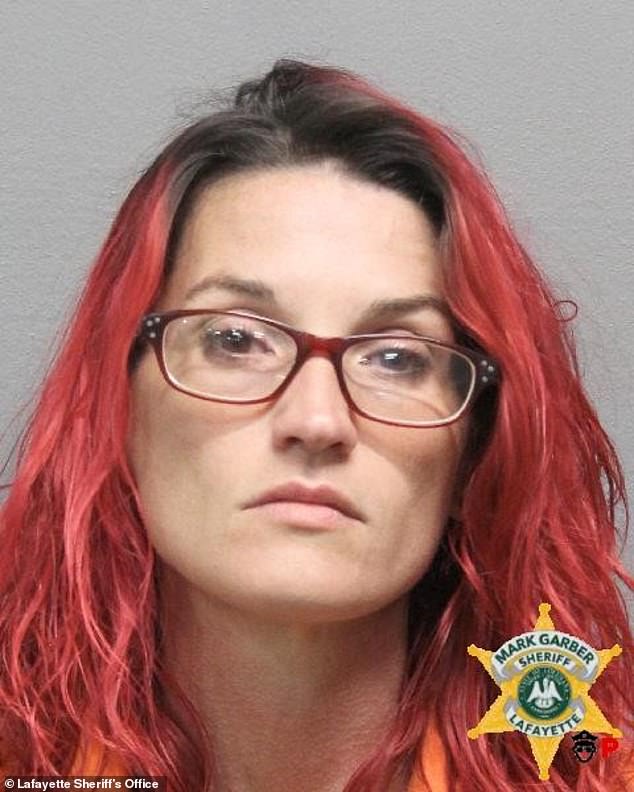 Janet Irvin, 37, (pictured) temporarily lost the custody of two of her three children a decade ago after she was accused of domestic violence and neglect by her children’s father, according to court records in Lafayette, Lousianna 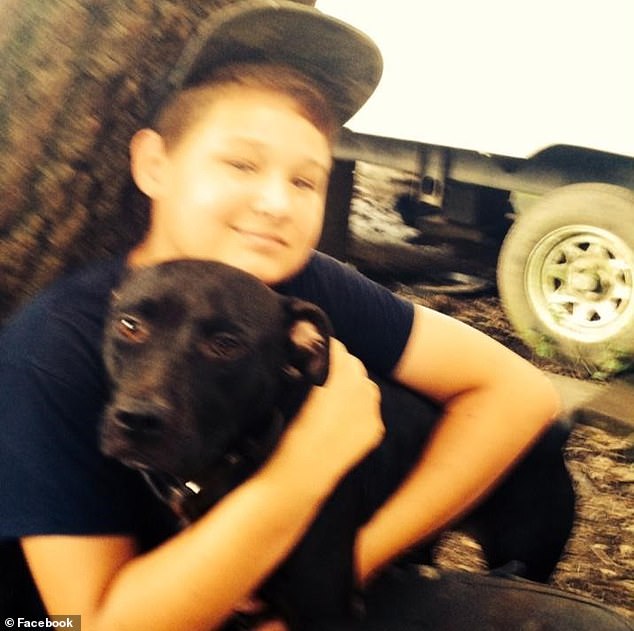 According to family spokeswoman Charles, the teenage boy was picked up by Irvin and her 17-year-old son Gavin (pictured) at home in the nearby town of Baldwin on the afternoon of October 30

The family think the boy was the victim of a racial hate crime.

They say police would have acted sooner if he was white and that an Amber Alert should have been created.

Janet Irvin temporarily lost the custody of two of her three children a decade ago after she was accused of domestic violence and neglect by her children’s father, according to court records in Lafayette, Lousianna.

The man, Joshua Romero, accused Irvin in a hand-written statement to a local family court of suffering from drug and alcohol ‘problems,’ stealing prescription medication and money, dropping their then-two-year-old son on the floor and allowing the child to drink her beer.

The revelations come as the family of 15-year-old Quawan Charles has been unable to talk to Irvin about what could have happened on October 30, when he walked away from Irvin’s trailer in the tiny town of Loreauville and into sugar fields.

‘As far as we’re concerned, Quawan was under her (Irvin’s) care,’ said Celina Charles, a spokeswoman for Quawan’s family. ‘We’d just like to know what happened.’

DailyMail.com visited the Chastant Trailer Park where Quawan was last seen alive and witnessed the crushing poverty of Louisiana’s agricultural countryside, with many of the trailers damaged, unstable, un-maintained or just too old to be comfortable. 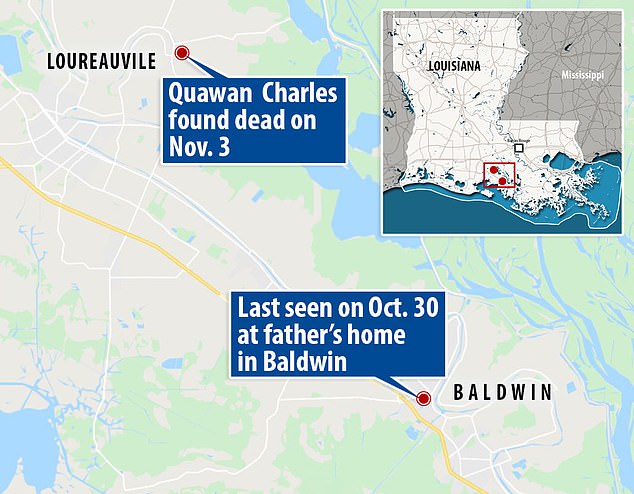 Quawan was last seen at his father’s home in Baldwin on October 30. His body was found 25 miles north three days later 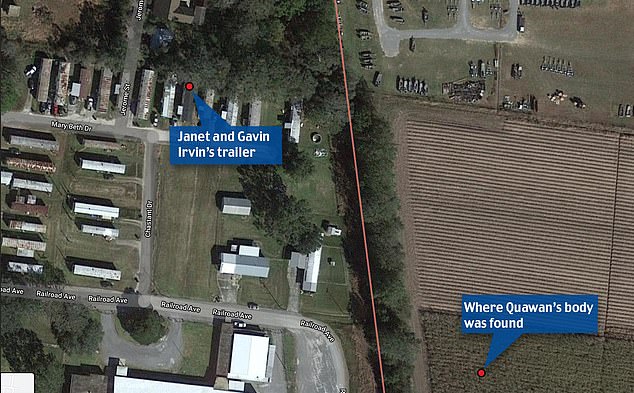 The revelations come as the family of 15-year-old Quawan Charles has been unable to talk to Irvin about what could have happened on October 30, when he walked away from Irvin’s trailer in the tiny town of Loreauville and into sugar fields

One of the park’s residents, who asked not to be identified by name, told us where deputies with the St. Mary Parish Sheriff’s Office found the teen’s lifeless body after ‘pinging’ his cellphone in the evening of November 3.

We walked to a vacant field in the back of an abandoned school, through a thin hedge made of brush and trees and traveled about 1,000 feet south alongside rows of 10-foot-tall sugar canes before arriving at a drainage ditch littered with a discarded purple cooler and other debris. 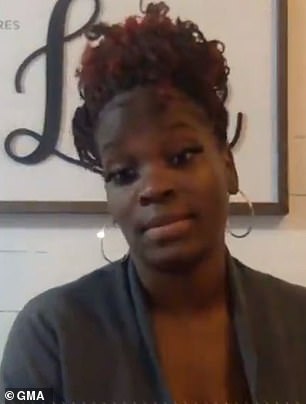 Quawan’s cousin, Celine Charles, said on Monday morning that the family believes he was beaten to death

‘Nobody ever comes here,’ said the resident. ‘There’s no reason he should’ve been walking around here. Especially at night, you can’t see anything.’

According to family spokeswoman Charles, the teenage boy was picked up by Irvin and her 17-year-old son Gavin at home in the nearby town of Baldwin on the afternoon of October 30.

Quawan, she said, lived in a newly-built, comfortable suburban development in Youngsville, Lousiana., with his mother, Roxanne Nelson and her husband.

A week before he died, however, Quawan was sent to live at his dad’s house in Baldwin, 35 miles away.

At his new school, Quawan had been in contact with Gavin Irvin, 17, who had been in school with Quawan back in Youngsville and, like him, moved.

For an unknown reason, Celina Charles said, Gavin and his mother Janet picked up Quawan at his father’s home and drove to their rented trailer in Loreauville.

Sheriff Tommy Romero said investigators have spoken with at least one witness who reportedly saw Charles before his death in the area where he was later found.

Hundreds of people lined up outside COVID testing facilities in New York City Tuesday morning before they even opened their doors as coronavirus...
Read more
U.S

Billionaire Charles Koch says he was 'horrified' by extreme immigration and...
Read more

UK Property: Busiest October for sales in 5 years due to ‘overwhelming demand’ from buyers