Insulin developed from the venom of a predatory sea snail could be used to create a ‘safer and more effective’ diabetes treatment, researchers claim.

It mimics the ultra-fast-acting properties of the sea snail venom to lower blood sugar levels, without long-term side effects seen in other types of diabetes treatment.

University of Utah led scientists developed what they call the world’s smallest, fully functional version of the insulin hormone from the venom.

They say the findings, based on animal studies, could jumpstart the development of insulin treatments capable of improving the lives of those with diabetes. 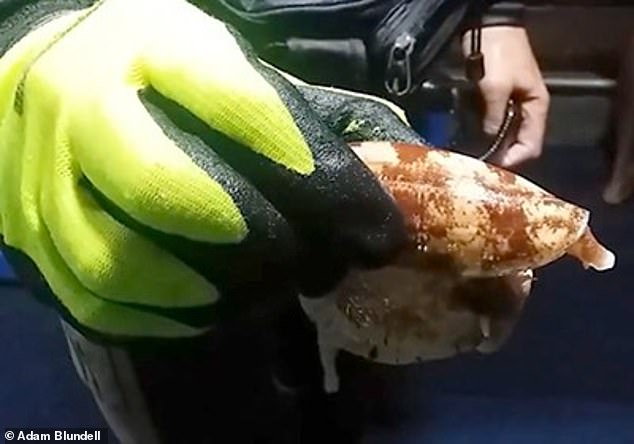 A scuba diver holds a live specimen of Conus geographus collected during a night dive. Scientists used insulin extracted from this snail’s venom to produce a hybrid form of fast-acting insulin that could work in humans

‘We now have the capability to create a hybrid version of insulin that works in humans and that also appears to have many of the positive attributes of cone snail insulin,’ says Danny Hung-Chieh Chou, one of the study authors.

Cone snails slither across coral reefs and as they do so they are constantly on the prowl for prey – one version of the species gives off a plume of toxic venom.

The venom of the Conus geographus snail contains a unique form of insulin.

It spouts this venom into the surrounding water and this causes the blood glucose levels of nearby fish to plummet, temporarily paralysing them.

As the fish flounders, the snail emerges from its shell to swallow the subdued victim. 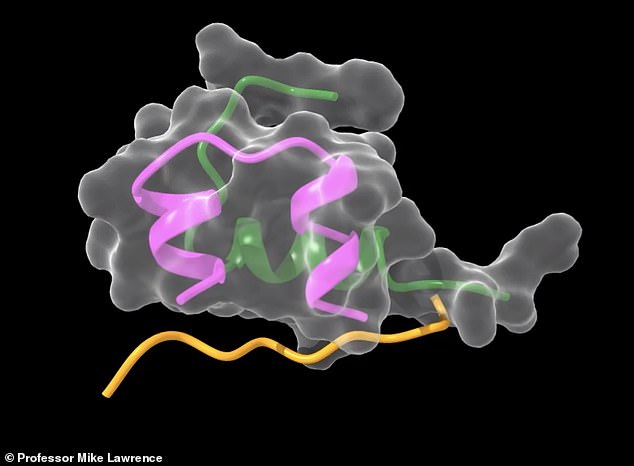 Diabetes treatments could be improved following the development of a dramatically modified form of human insulin, called ‘Mini-Ins’, that successfully mimics the ultra-fast-acting properties of cone snail venom insulin

Chou and colleagues discovered that the venomous insulin from the snail had similar traits to human insulin and worked faster.

Faster-acting insulin would diminish the risk of hyperglycemia and other serious complications of diabetes, says Helena Safavi, a study co-author.

Safavi from the University of Copenhagen said It also could improve the performance of insulin pumps or artificial pancreas devices.

Adding that this would automatically release insulin into the body as needed.

‘We want to help people with diabetes to more tightly and rapidly control their blood sugar,’ she says.

In pursuit of their goal, the researchers found that insulin derived from cone snail venom lacks a ‘hinge’ component that causes human insulin to aggregate or clump together so it can be stored in the pancreas.

The aggregates must break into individual molecules before thay can begin to work on blood sugar – a process that can take up to an hour.

Cone snail insulin doesn’t aggregate, so it is in essence primed and ready to work on the body’s biochemical machinery almost immediately.

Intrigued, the researchers began to investigate ways to transform the insulin that cone snails use as a weapon into a different form.

They wanted to create something that people who have Type-1 diabetes could use to rapidly restore equilibrium in their bodies.

‘We had the idea of making human insulin more snail-like,’ says Safavi, who is also an adjunct professor of biochemistry at U of U Health. 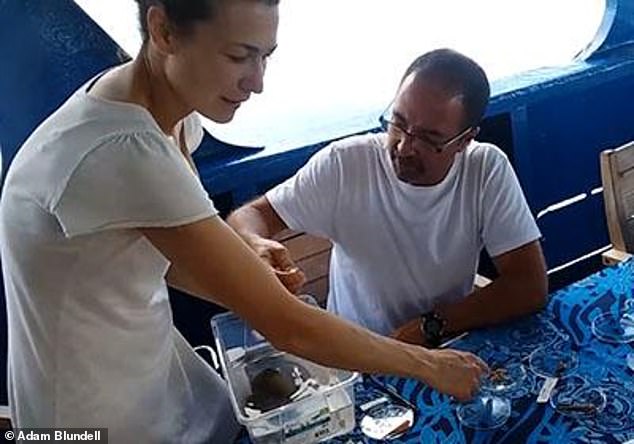 Helena Safavi, left, helps her colleague, José Rosado from Maputo, Mozambique, sort cone snails collected by scuba divers near the Solomon Islands in the south Pacific. The scientists set up a mobile lab on the diving ship to dissect and preserve the biological samples

‘So, we sought to basically take some of the advantageous properties from the snail and graft them onto the human compound.’

The researchers thought this was possible because cone snail insulin essentially has the same basic structure or ‘backbone’ as human insulin.

Despite its rapid properties, the team faced a dilemma: the snail’s insulin is far less potent than human insulin.

In fact, the researchers suspect that humans would require 20 to 30 times more of the cone snail insulin to lower their blood sugar levels.

Chou and colleagues sought to overcome these problems by adapting the cone insulin to work more effectively and increase its potency. 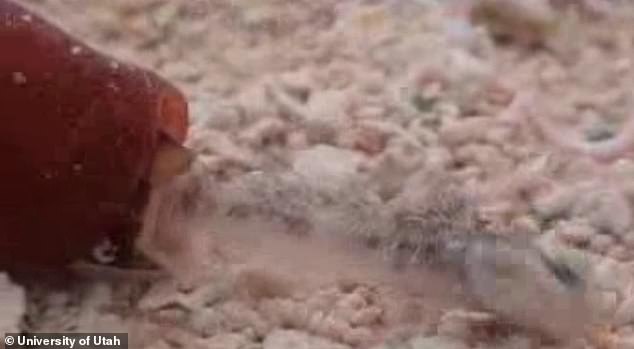 Cone snails slither across coral reefs and as they do so they are constantly on the prowl for prey – one version of the species gives off a plume of toxic venom. The venom of the Conus geographus snail contains a unique form of insulin

Then, they created a truncated version of a human insulin molecule without the region responsible for clumping.

The team integrated modified versions of these amino acids into the human molecule in hopes of creating a hybrid that does not clump and binds the human insulin receptor with high potency.

In tests with rats, this hybrid insulin molecule, which the scientists call ‘mini-insulin,’ interacted with insulin receptors in ways that cone snail insulin doesn’t.

These new interactions bound mini-insulin to insulin receptors in the rat’s body just as strongly as normal human insulin would.

As a result, mini-insulin had the same potency as human insulin but acted faster.

‘With just a few strategic substitutions, we have generated a potent, fast-acting molecular structure that is the smallest, fully active insulin to date.

‘Because it is so small, it should be easy to synthesize, making it a prime candidate for the development of a new generation of insulin therapeutics.’

The study appears in Nature Structural and Molecular Biology.

Diabetes is a lifelong condition that causes a person’s blood sugar level to become too high.

There are two main types of diabetes:

– Type 1, where the body’s immune system attacks and destroys the cells that produce insulin.

– Type 2, where the body does not produce enough insulin, or the body’s cells do not react to insulin.

In the UK, around 90% of all adults with diabetes have type 2.

Reducing the risk of type 2 diabetes can be achieved through healthy eating, regular exercise and achieving a healthy body weight.

Children who write by hand learn and remember more than those that use computers, experts say

Brexiteer reveals why EU will not compromise in trade talks ‘They...

Listen to Episode 32 of ‘Pinstripe Pod’: Yankees Moving on to...

Brexiteer reveals why EU will not compromise in trade talks ‘They...

Listen to Episode 32 of ‘Pinstripe Pod’: Yankees Moving on to...