Genes in the eyes of sea snakes evolved rapidly over the course of 15 million years to allow them to see underwater, according to an international team of scientists.

The aquatic reptile branched away from its terrestrial relatives when it entered the sea and has been evolving ever since to survive changing light conditions, they say.

The creature’s vision – in particular pigment-producing genes in their eyes – changed so they can see prey and predators at ocean depths of more than 250 feet.

Fanged and poisonous sea snakes, which surprise divers in the Pacific and Indian oceans, are of the elapid family of snakes, known for their deadly toxins.

But sea snakes have adapted to changing conditions as well as some fruit-eating primates such as prosimians and new world monkeys, the researchers claim. 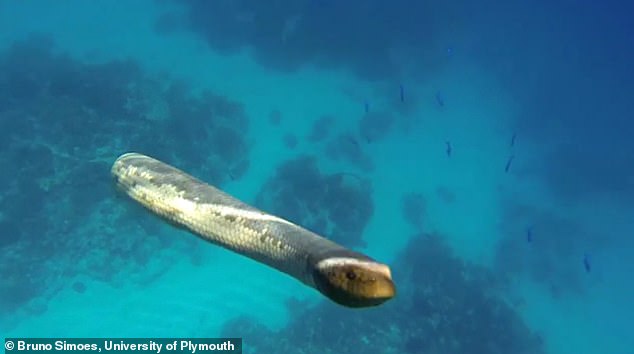 An olive sea snake (Aipysurus laevis) surfacing to have a breath in Western Australia. Snakes generally have limited, often two-tone, colour vision thanks largely to the dim-light lifestyle of their early snake ancestors. But sea snakes colour vision has expanded and shifted enabling them to continue to see prey and predators at great depths

‘In the natural world, species obviously have to adapt as the environment around them changes,’ said Dr Bruno Simões, lecturer in Animal Biology at the University of Plymouth.

‘But to see such a rapid change in the sea snakes’ vision over less than 15 million years is truly astonishing.

‘The pace of diversification among sea snakes, compared to their terrestrial and amphibious relatives, is perhaps a demonstration of the immensely challenging environment they live in and the need for them to continue to adapt in order to survive.’

‘Our study also shows that snake and mammal vision has evolved very differently in the transition from land to sea.’

While sea snake vision improved, marine mammals, such as pinnipeds (a clade that includes seals and walruses) and cetaceans (whales), had their colour vision reduced over time.

‘This contrast is further evidence of the remarkable evolutionary diversity of snake eyesight,’ said Dr Simões.

Sea snakes are a sub family of the fanged and venomous ‘elapid’ family, which also includes the king cobra and Australia’s lethal death adder. 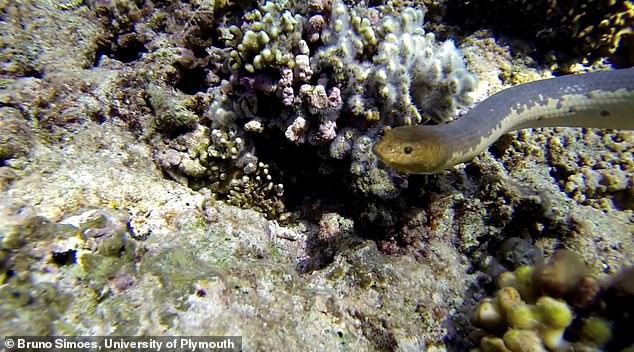 An olive sea snake foraging in Western Australia. Sea snake species live mainly in waters less than 100 feet deep, as they must dive to the seafloor to obtain their food among coral reefs, among mangroves, or on the ocean bottom

Elapids are ecologically very diverse, with around 300 terrestrial species, including cobras, coral snakes and taipans and 63 fully marine sea snakes, as well as the semiaquatic sea krait.

Despite being aquatic, sea snakes don’t have gills like fish and have to emerge from the water regularly to be able to breathe.

Sea snake species live mainly in waters less than 100 feet deep, as they must dive to the seafloor to obtain their food among coral reefs or the ocean floor, meaning they are constantly slithering up and down the ocean column.

WHAT ARE SEA SNAKES?

Most sea snakes species live mainly in waters less than 100 feet deep, as they must dive to the seafloor to forage for food.

However, they can reach the sea floor at depths exceeding 260 feet (80 metres), despite having to swim to the surface to breathe at least once every few hours.

Most adults are 3.3–5 feet long, though some individuals may attain lengths of 8.9 feet.

They are restricted to coastal areas of the Indian and western Pacific oceans, except for the yellow-bellied sea snake, found in open ocean from Africa eastward to the west coast of the US.

Although their venom is the most potent of all snakes, human fatalities are rare because sea snakes are not aggressive and their fangs are short.

The Aipysurus duboisii, or Dubois’ sea snake is one of the most venomous snakes in the world.

And although being descended from highly visual lizards, snakes generally have limited – often two-tone – colour vision, which has been attributed to the dim-light lifestyle of their early snake ancestors.

Sea snakes, however, have retained or expanded their colour vision compared to their terrestrial relatives, the team of biologists said.

To try and establish how this diversity occurred, they analysed species of both terrestrial and sea snakes from sources including fieldwork in Asia and Australia and historical museum collections.

They investigated their sensitivity to wavelengths in the light spectrum by analysing their opsin genes – proteins that produce visual pigments responsible for sensitivity to ultra-violet and visible light – as well as retinal photoreceptors and eye lenses.

They found sea snakes had undergone rapid diversification of their visual pigments as a way to adapt to the environment, compared with their terrestrial and amphibious relatives.

As an example, the ‘hydrophis’ genus of sea snake, found in Australian and Asian waters, has had expanded its sensitivity to ultraviolet light, rendered blue underwater.

This expanded sensitivity to UV-Blue helps the snakes to see in the variable light conditions throughout the ocean’s depths.

‘Many nocturnal animals are sensitive to ultra-violet light since it allows these animals to see shapes or movement in low-light conditions,’ said Dr Simões 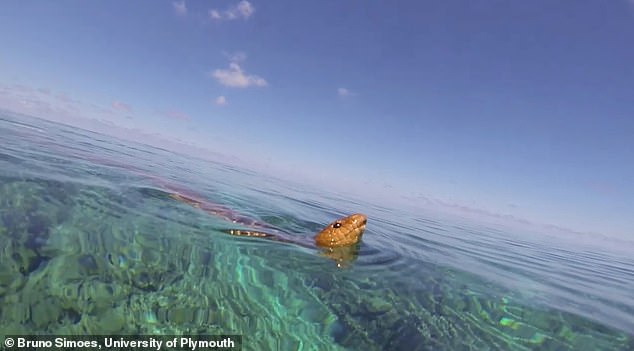 An olive sea snake (Aipysurus laevis) taking a breath while foraging in Western Australia. Sea snakes can reach the sea floor at depths exceeding 260 feet (80 metres), despite having to swim to the surface to breathe at least once every few hours

‘However, how light propagates in the sea is very different – UV light is reflected by the water surface or dissipated in the first meters of the water column and blue light is abundant underwater.

‘Sea snakes need to come up to breathe every couple of hours and so ultra-violet vision is necessary to see at the surface at night, but blue-light sensitive vision is better when sea snakes dive and feed on the seafloor.’

The team of biologists compared this genetic adaptation to some primates, referring to previous studies.

Most vertebrates have pairs of chromosomes resulting in two copies of the same genes, but in some fruit-eating primates, the two copies might be slightly different – known as ‘alleles’.

The team said some sea snakes used the same mechanism to expand their underwater vision with both UV sensitive and blue-sensitive alleles.

‘Different alleles of the same gene can be used by organisms to adapt new environmental conditions,’ said senior author Dr Kate Sanders, associate professor of the University of Adelaide in Australia. 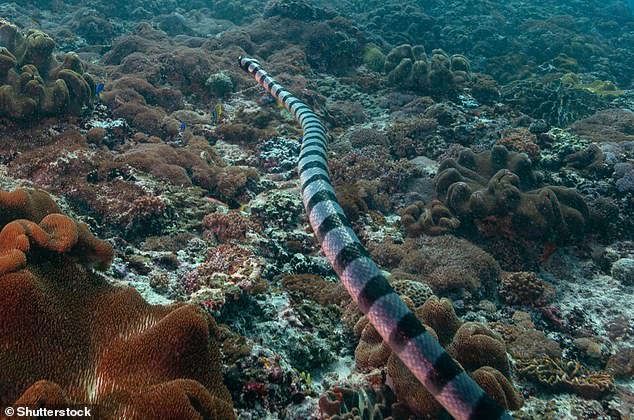 ‘The ABO blood types in primates are a result of different alleles of the same gene.

‘However, despite being very important for the adaptation of species this mechanism is still poorly reported.

‘For vision, it has been only reported on the long-wavelength opsin of some primates but our study suggests an intriguing parallel with diving sea snakes.’

Most samples used in the study were collected by Dr Simões and his co-authors in fieldwork expeditions.

The study has been published in Current Biology.

Elapid snakes cause death from paralysis of the heart and lungs 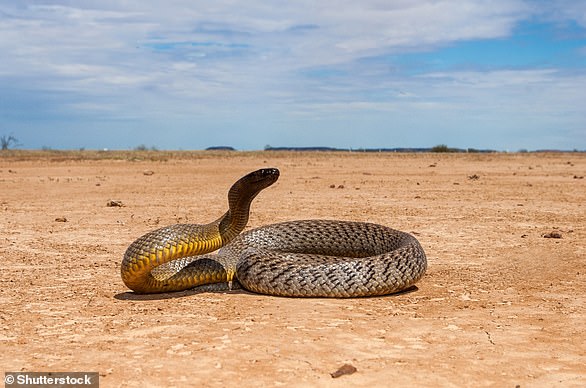 The inland taipan, considered the most venomous snake it the world, in strike position

Elapid snakes are extremely venomous snakes such as cobras, mambas, kraits, tiger snakes, and coral snakes in the family Elapidae.

They have hollow, permanently erect fangs in the front of the mouth that channel primarily neurotoxic venom – causing damage damage to the brain or peripheral nervous system – into their prey.

The bite is relatively painless, but death from paralysis of the heart and lungs may be swift.

Most elapids are small and inoffensive to humans, but the family also contains some of the largest and most lethal of snakes, including the inland taipan and the eastern brown – respectively the first and second most land snakes in the world.

Elapids are found in America, Africa, southern Asia, Pacific Islands, and Australia – around 60 species of elapids live down under.