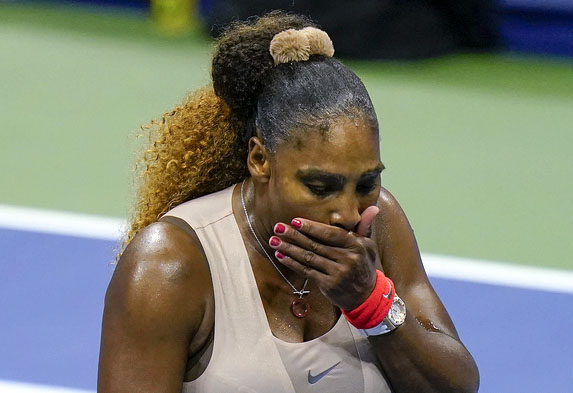 Serena Williams heads now to the French Open to play on her least-favorite surface — clay — that blunts her massive serve. She’s only won just three of her 23 Grand Slam titles at Roland Garros — in her prime. So temper the expectations later this month.

Williams hasn’t won a Slam since January, 2017. That shouldn’t be shocking. The oldest man or woman to win a major is Ken Rosewall at age 37.

Her reputation, popularity and dazzling power made Las Vegas’ Westgate Sportsbook put her as second choice at the 2020 Open (5-1 to Naomi Osaka’s 4-1).

This was the weakest field she will ever face in a Grand Slam (six of the top eight players didn’t show). The French will be a deeper draw. A miracle may be in order for her to tie Margaret Court before she retires, still the greatest women’s player ever.

As Williams may have hinted, the Compton legend played almost as good as she could — and it wasn’t enough.

“It’s obviously disappointing,’’ Williams said after losing to Azarenka. “At the same time, I did what I could today. I feel like other times I’ve been close and I could have done better. Today I felt like I gave a lot.’’

She was breathing so heavy, she kneeled at the waist after long rallies. Williams asked for a five-minute injury timeout for an Achilles twinge while on the ropes early in the third set. It appeared more like a chance to steal a five-minute breather.

ESPN’s tennis guru Pam Shriver said she still believes if Williams can get in better shape, then 24 will come.

“I go back and forth but she can still do it,’’ Shriver told The Post. “She was still in the final four, still can play like she did in the first set and dug out the third against [Maria] Sakkari [in the quarterfinals]. As long as she’s motivated and thinks she can win 24, I think she’s going to win. She’s very motivated to win one as a mom. But I still want to see her get in better shape so she can move better going out wide.’’

Credit that relentless will to allow her to play at such a ferocious level. That first set against Azarenka was pure lethal as she jumped to a 4-0 lead. Azarenka looked frozen — as if she had been put in a cage with a tiger. But Williams couldn’t keep up that violent pace.

“The way she started [Thursday] night is how she would’ve finished in the third set,’’ Shriver said. “Once she hits the top level, she knew how to maintain it. She has doubts now and that translates to the opponents.’’

As a wife and mother of a 3-year-old, asking her to be even more dedicated than she’s ever been won’t be easy. Shriver would like to see Serena travel to a remote training spot to work on stamina before the 2021 Australian Open.

Maybe Williams can join rehabbing Roger Federer in Qatar and train in the 105-degree desert the way The Swiss Maestro once did. Federer is approaching 40.

Shriver said Williams, listed by the WTA at 156 pounds, will never lose that “Herschel Walker frame”. But if she wants to be a Slam champion again, her fitness needs to improve. It also wouldn’t be the worst if Williams also added a chance-of-pace to augment her fastball.

“She’s got to get down to a playing weight she had when she was in her mid-20’s,’’ Shriver said. “It will help her cardio she needs to get two steps better on defense to get to 24.’’

At 39, Williams will need more than her blistering serve, groundstrokes and unprecedented competitiveness. She is the survivor of two pulmonary embolisms and those bones aren’t getting younger.

It is a testament to Williams’ will, greatness and raw talent that observers still think 24 is possible. Because it sure looks unfair to expect it anymore.

US Olympian Chloe Dygert crashes over guardrail in cycling accident