Shocking new footage shows the moment a boat exploded into a ball of flames and people fled for their lives into the water during a music video shoot in Florida.

More than a dozen people were injured when the boat on the New River in Fort Lauderdale, Florida, caught fire.

The blaze broke out just before 2 p.m. on October 15 on a 41-foot Wellcraft pleasure boat that was cruising down the river.

The boat was well over capacity, with twice the number of people on board than should be on a boat of its size, without any life jackets. 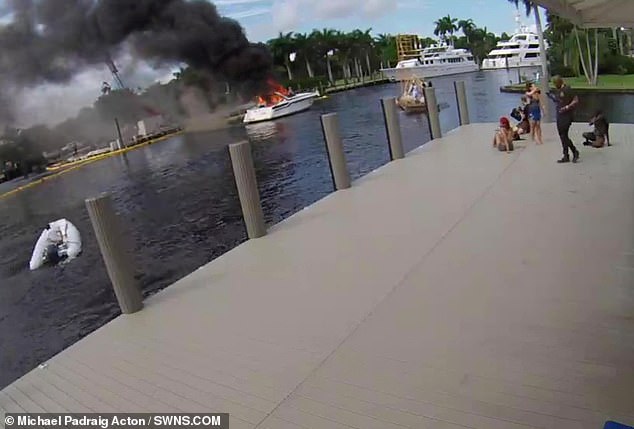 The flaming 41-foot pleasure boat in the New River waterway in Ford Lauderdale, Florida was captured on a nearby home’s CCTV camera as desperate passengers escaped the fire

Nearby boaters heard an explosion ring out over the narrow waterway, before they saw the flaming boat floating on the water.

Multiple people called 911 to report the explosion as people jumped into the water and onto other vessels to escape the flames engulfing the boat.

Fort Lauderdale Fire Rescue Battalion Chief Stephen Gollan said by the time fire crews had arrived, people in the water were being picked up by nearby boaters.

Abraham Alejandro, 25, told the Sun Sentinel that he was the cameraman making the video for musical artist Jaican.

‘Just glad to have made it out alive,’ he said on Instagram. ‘This is extremely traumatizing and I learned a lot today. Thank the Lord I made it out alive. I lost all my camera gear, but I still have my life and I’ll bounce back from this cr*p.’ 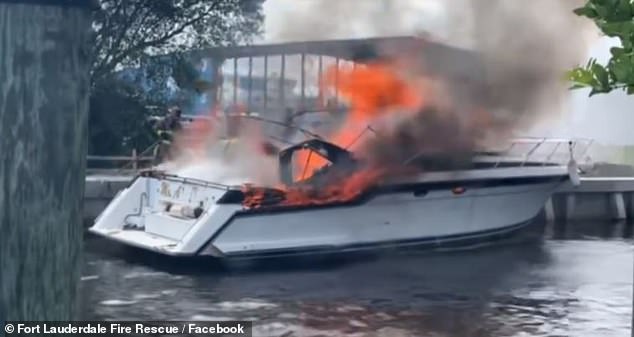 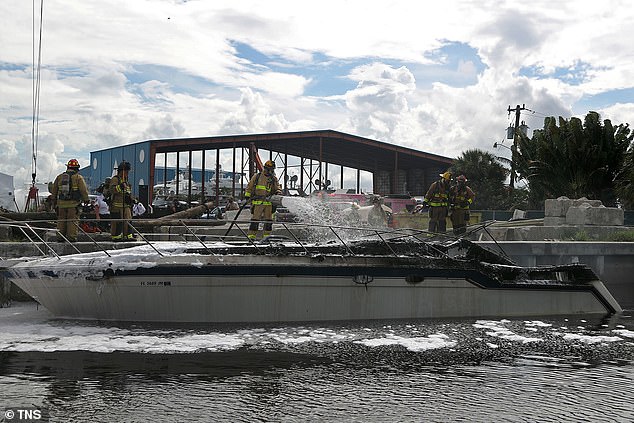 Firefighters were called to the scene by nearby boaters and were able to put the fire out by around 3.30 p.m. 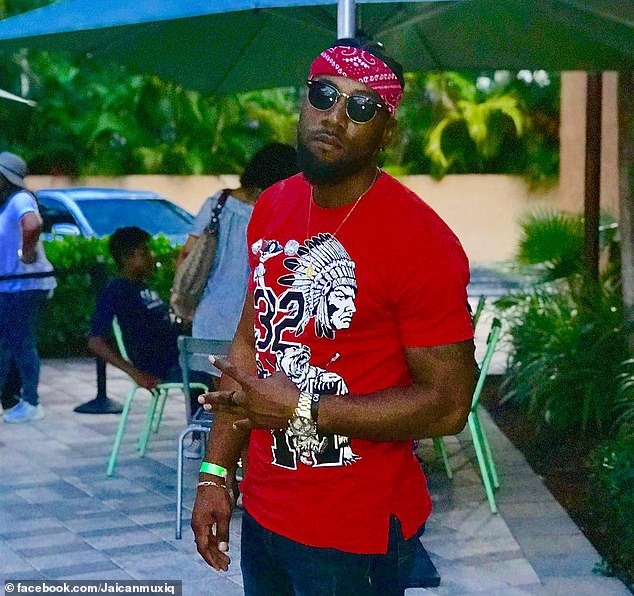 Abraham Alejandro, 25, told the Sun Sentinel that he was the cameraman making the video for musical artist Jaican (pictured) when the boat caught fire

The Sun Sentinel reported that of the 21 people on board, 13 were injured, with seven being taken to Broward Health Medical Center where they were treated for minor burns, cuts and bruises, according to trauma surgeon Jose Lozada.

Two people were severely burned, one of which was taken to Jackson Memorial Burn Unit in Miami where as of last Thursday they were in a critical condition.

Fire rescue boat put the fire out by about 3.30 p.m., with authorities saying they were investigating the cause of the fire.

‘So our crews immediately divided, with a fire attack on the north of the river, stopping the boat from floating down the river any further while our rescue crews were on the south side of the river at the Lauderdale Marine Center treating patients.’

The newly emerged footage – taken from the CCTV camera on a nearby home – shows terrified passengers screaming for help and throwing possessions overboard. 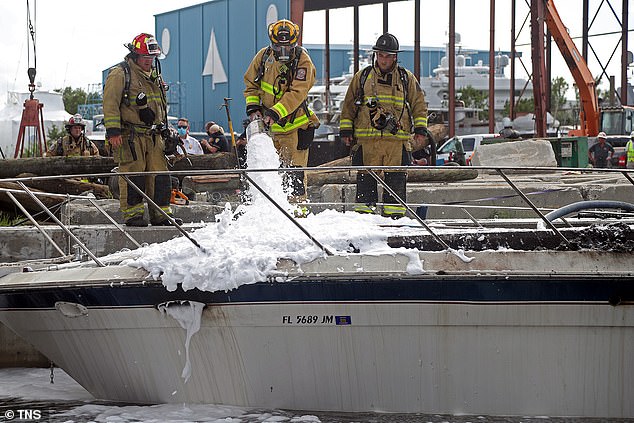 Nearby boaters heard an explosion ring out over the narrow waterway, before they saw the flaming boat floating on the water

They can be seen jumping into lifeboats while flames quickly engulfed the stricken vessel.

Injured passengers can be seen lying and pacing back and forth on a nearby dock as the flames destroyed the boat.

One woman can be heard saying ‘all our stuff is on fire’.

A woman wearing a swimsuit can be seen crying into her friend’s arms as she examines her body for burns while another woman limps across the decking. 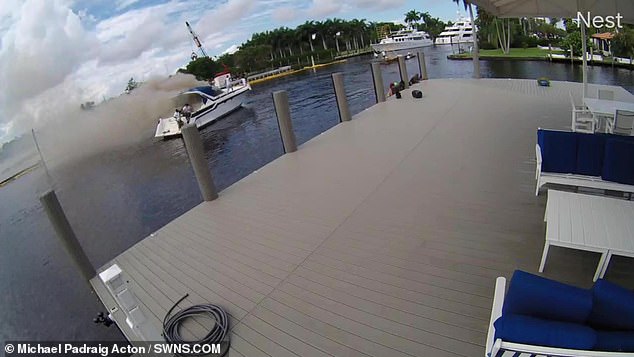 The CCTV footage captured on a camera on a nearby home saw people scrabbling up onto the deck after escaping from the boat, with some passengers still on the boat waiting to be rescued 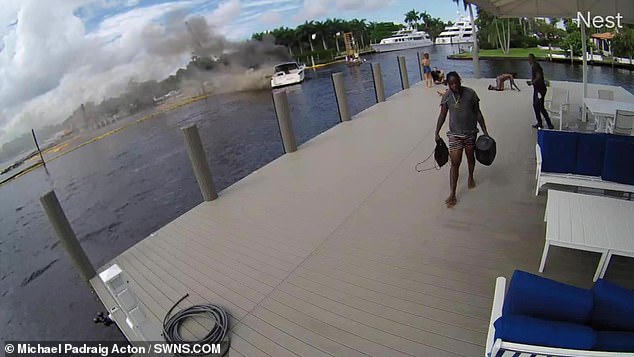 More boaters on the waterway came to the aid of those on board the flaming vessel, with the group of 21 – some seriously injured – being taken off in different directions

Another man can be seen clutching his side and complaining of chest pain and saying: ‘It was right there next to me… that sh*t blew up and I couldn’t breathe.’

The footage comes from security cameras attached to the nearby home of author Michael Padraig Acton, 57.

Michael, a psychologist, said: ‘Our housekeeper was there and she was the one who called the police after seeing people running onto our dock.

‘She locked the house up as she was scared and didn’t even see the burning boat at first.

‘At the end of the clip, you can see her hosing down the blood off of our dock as people had been bleeding all over it from their burns and injuries. 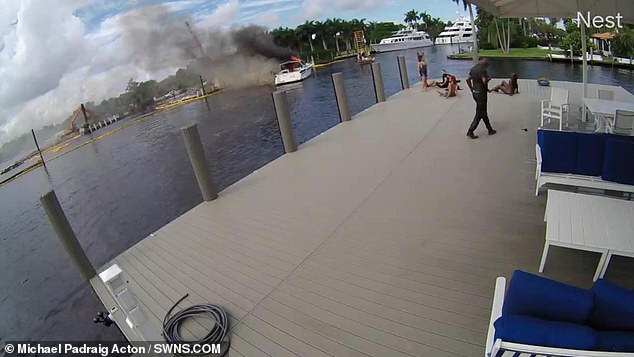 The blaze broke out just before 2 p.m. on October 15 on a 41-foot Wellcraft pleasure boat that was cruising down the river 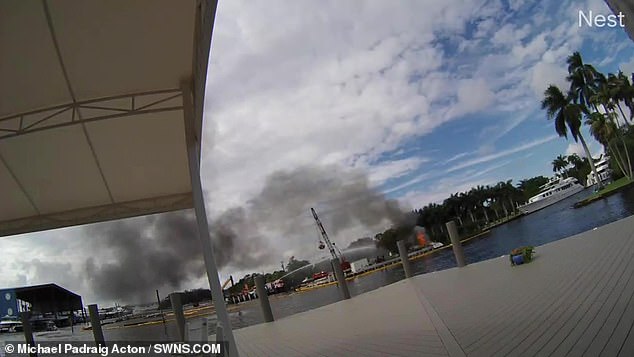 The boat was well over capacity, with twice the number of people on board than should be on a boat of its size. Pictured: Another camera on the house showing fire crews fighting the blaze

‘Watching the video was horrendous – you can hear people screaming for help and saying they can’t swim.

‘A group of people were on our dock sending out rescue boats to help them and thankfully they did get on.

‘The horrendous thing is some people didn’t care that there were people still screaming from a burning boat – they just wanted to look after themselves and that really got me.

‘There were 21 people onboard a 40 foot long boat – that’s twice the amount of people that there should be on there – without any life jackets.’

Facebook
Twitter
Pinterest
WhatsApp
Previous articleMilwaukee women allegedly drugged, robbed 10 men at Chicago bars
Next articleCoronavirus – do you have COVID or could it be lung cancer? What you need to know

Kevin Hart is defending the remarks he made about his teenage daughter's love life in his new Netflix standup comedy special Zero F**ks Given. In...
Read more
U.S