By Adriano Torres For Dailymail.com

A 55-year-old woman in Brazil is fortunate to be alive after her vehicle broke down on a train track and was plowed by a train.

A surveillance camera showed the moment the driver’s Fiat was coming to a stop as it approached the train track at an intersection in Barra Mansa on Thursday morning.

As the train barreled down the track, a man stepped out of the front passenger seat and attempted to move the car forward before a male cyclist tried to assist by pushing the car. 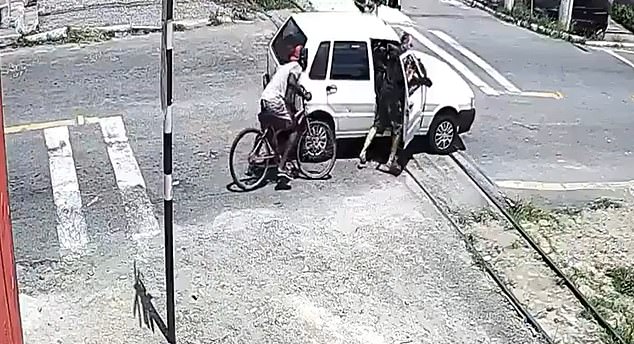 A passenger in Brazil attempted to move a Fiat that broke down on top of a railroad track moments before a train crashed into it Thursday morning. The driver was unable to get out of the car but didn’t suffer any injuries 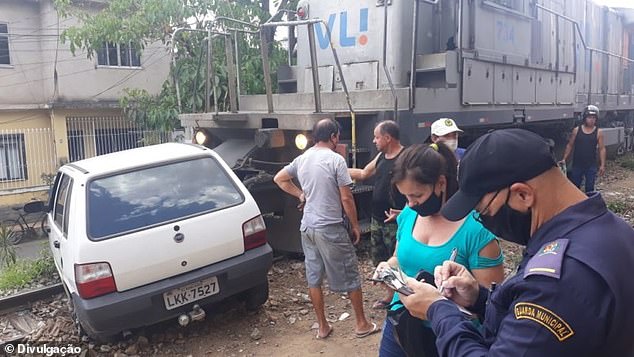 A cop in Barra Mansa, a city south of Rio de Janeiro, completes an accident report after a train crashed into a car Thursday morning. No injuries were reported

The passenger signaled at the train’s motorman to stop before he ran away from the car, leaving the woman behind inside the vehicle as the locomotive crashed into it.

The car was dragged at least 165 feet down the track and came to a full stop. 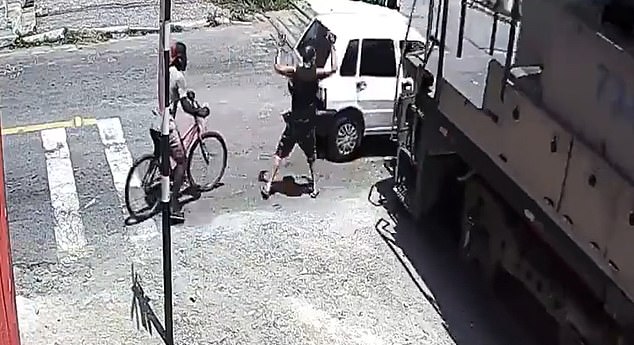 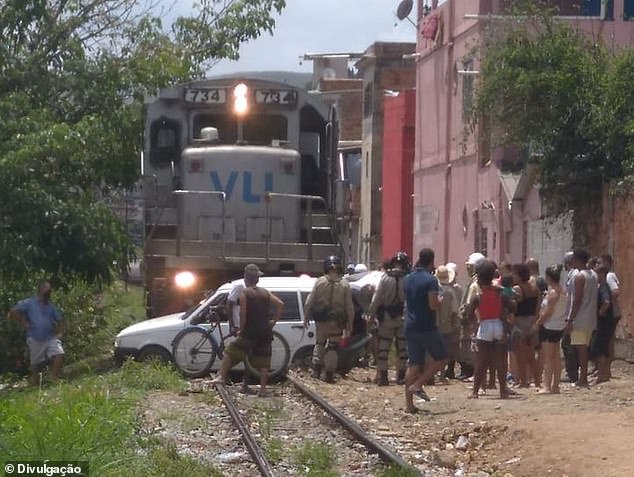 According to Brazilian news outlet G1, the woman was treated by the fire department and didn’t suffer any injuries.

VLI Logistics, which according to its website operates more than 20,000 locomotives and train cars over 4,900 miles of railroad in Brazil, said that the motorman used the horn to warn pedestrians and motorists as the train approached the intersection in the Vista Alegre neighborhood.

The motorman also deployed the emergency break system, but the company said the train can still travel more than a half-mile before it comes to a complete stop.

There's a growing list of people seeking pardons from Donald Trump and expecting to be looked after by the president in his final...
Read more
U.S

Bitcoin's seemingly unstoppable surge towards an all-time high and a $20,000 price tag went into reverse as holders tried to cash in their...
Read more
U.S

Coronavirus vaccine makers tightly controlled who was enrolled to their trials, their vaccine dosages, the timing of those doses and much more -...
Read more

"We must keep suppressing the virus, while supporting education, the economy and of course the NHS, until a vaccine can make us safe....
Read more