Home U.S Social media users share their 'Trumpkins' as they carve their pumpkins to...
U.S

As Hallowe’en approaches, there are few things that scare Joe Biden supporters more than the prospect of President Donald Trump being re-elected in November.

And this year people have once again taken carving the President’s face into Jack-o-lanterns to celebrate the spooky holiday.

Social media users have repeated the trend that appeared in 2016 when Trump first ran for the presidency.

People from across the US and even in the UK have posted pictures of intricately carved pumpkins, decorated to look like the 45th President. 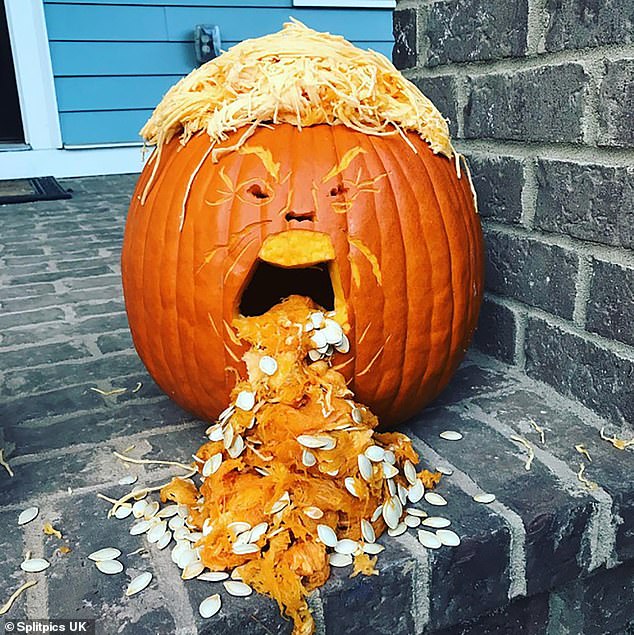 Social media users have restarted a ‘Trumpkin’ craze again this year, decorating Jack-o-lanterns in the style of the 45th President 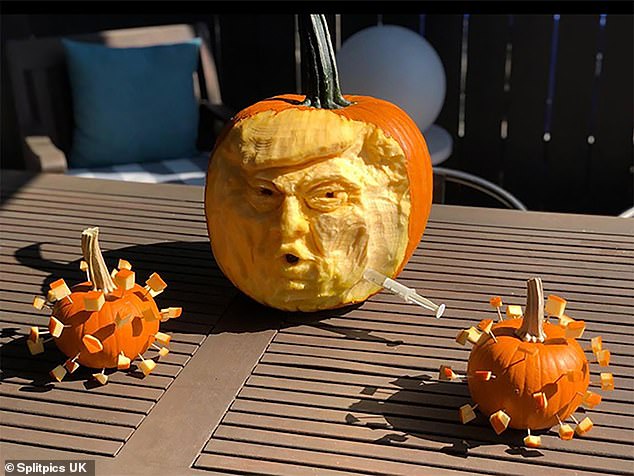 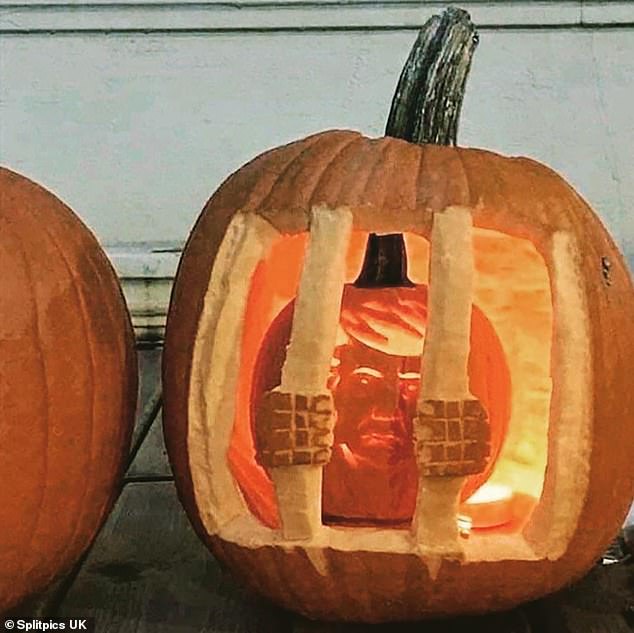 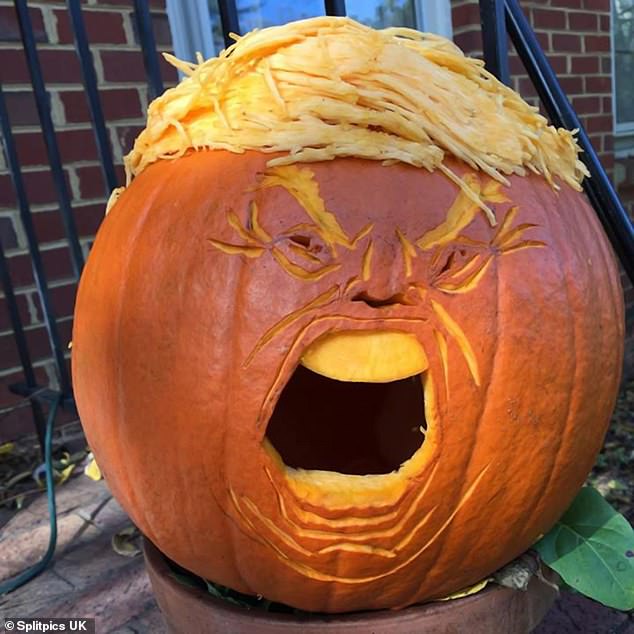 Most Trumpkins feature the President shouting or making a grotesque face, including this one, which features pumpkin flesh in place of his hair 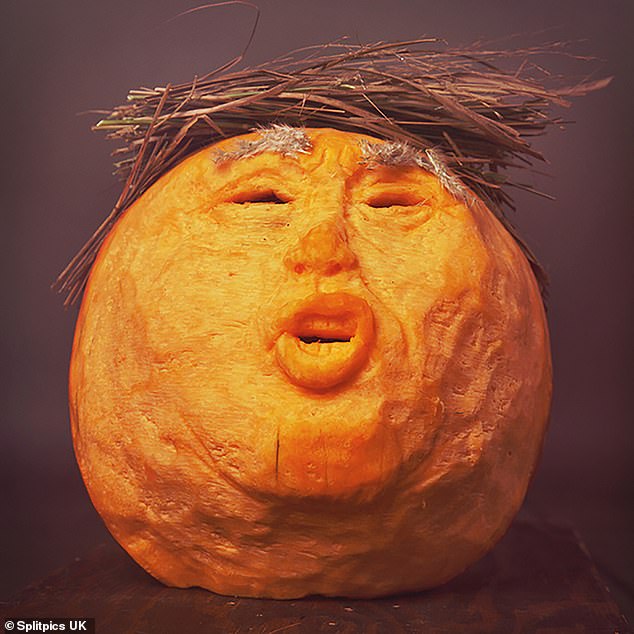 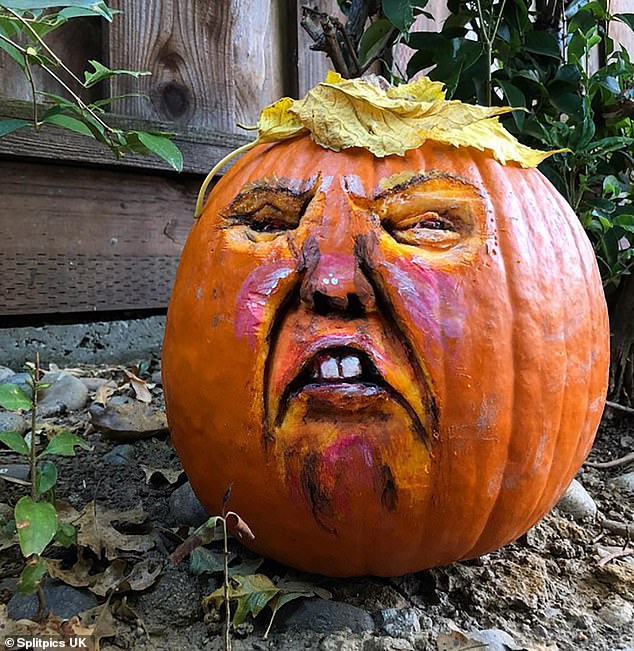 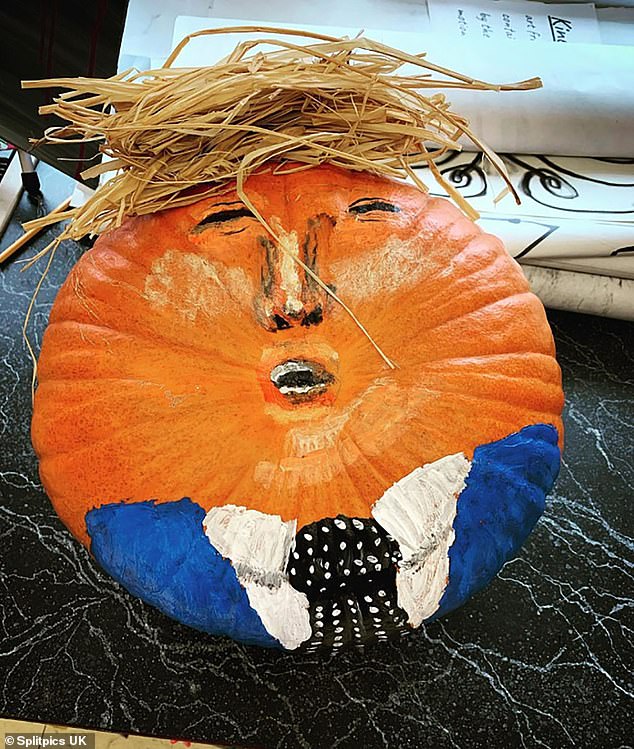 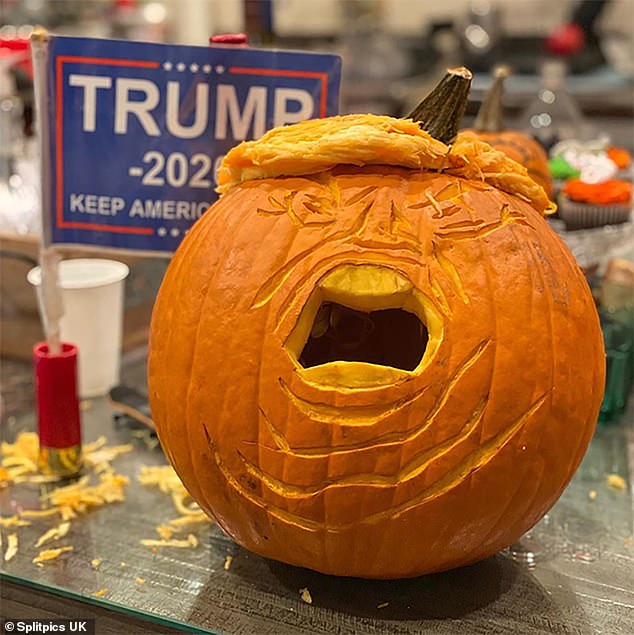 People have been using everything from creative carving and paint to wigs and globs of shredded pumpkin pulp to get the perfect likeness of the man in the White House.

Some have added ties and hats with ‘Make Halloween Great Again’ written on top to perfect the likeness. 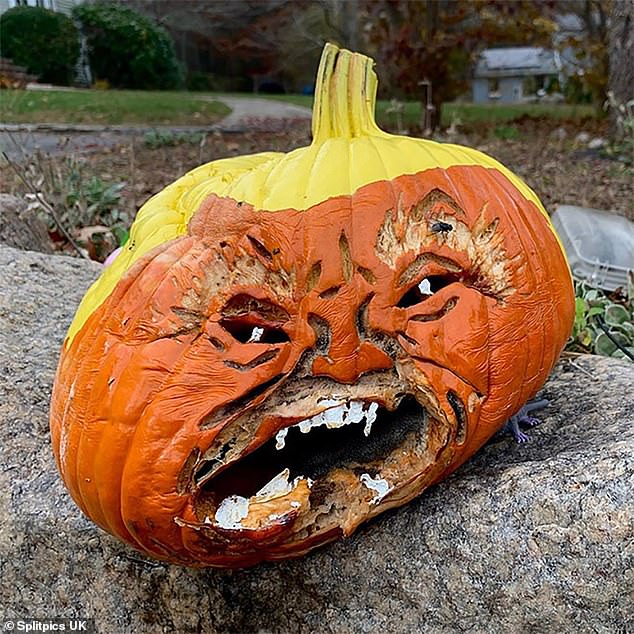 This Trumpkin has been left outside to rot, causing an ugly disfigurement to the pumpkin flesh 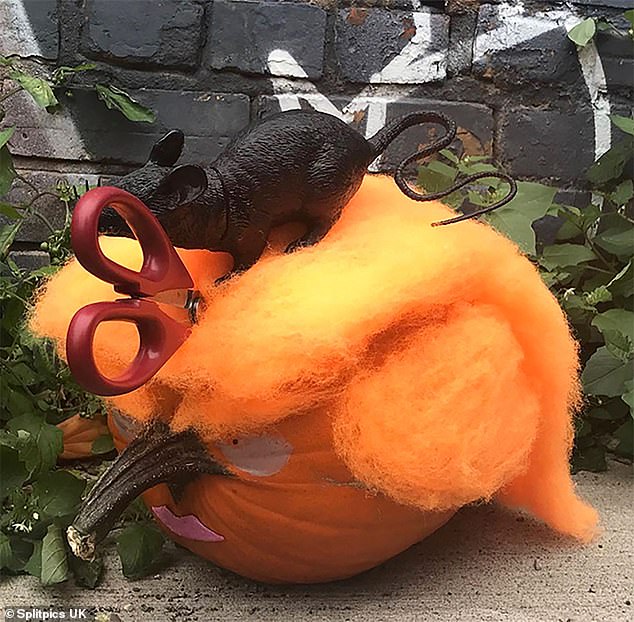 Another Trumpkin has been placed on its side, using the pumpkin’s stalk in place of a nose and decorating the hair with a pair of scissors and a rat 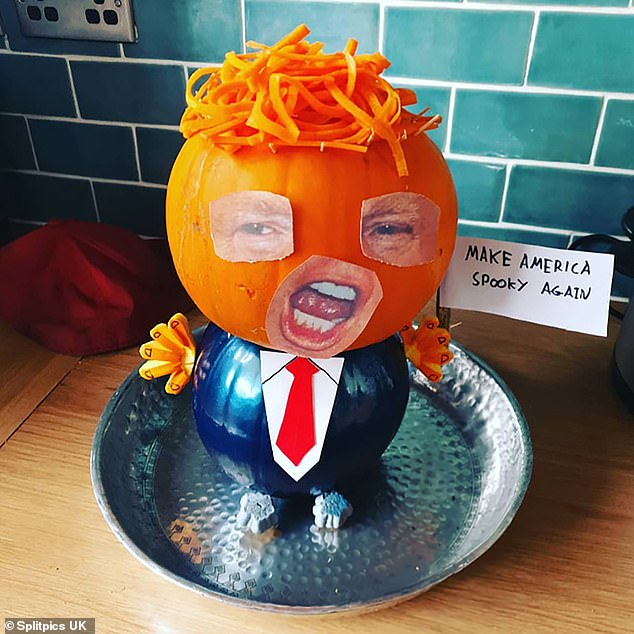 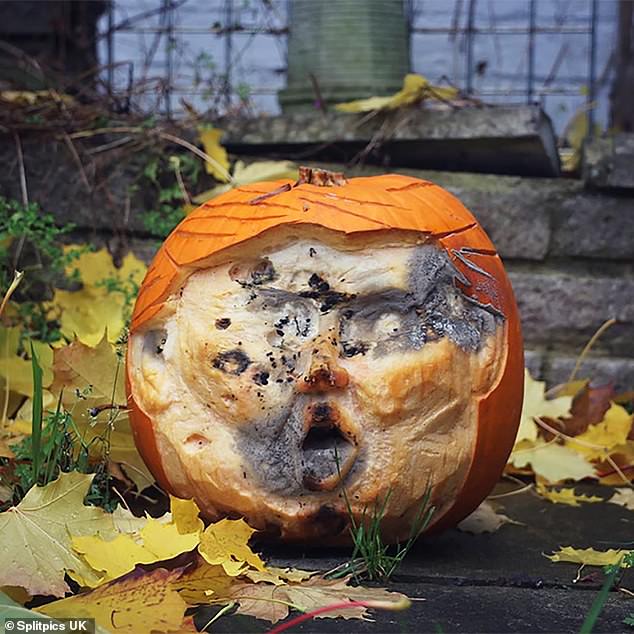 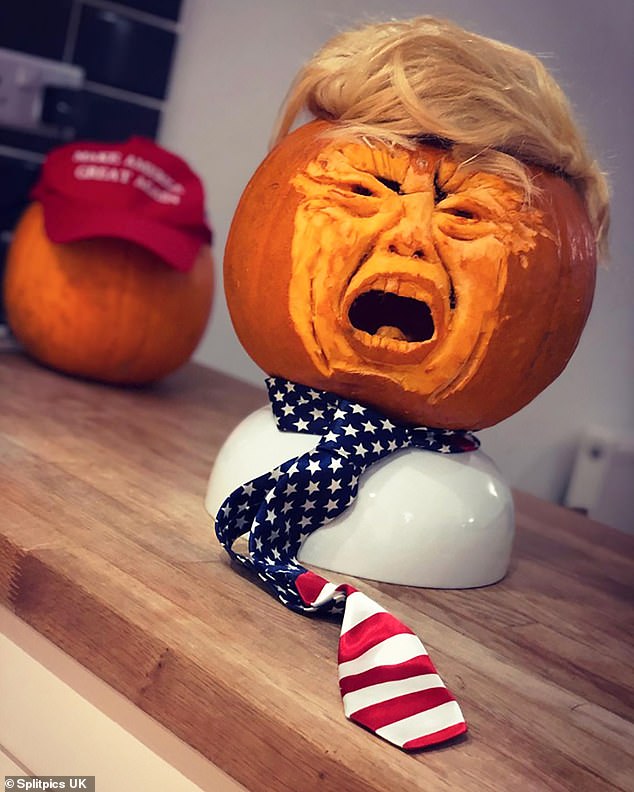 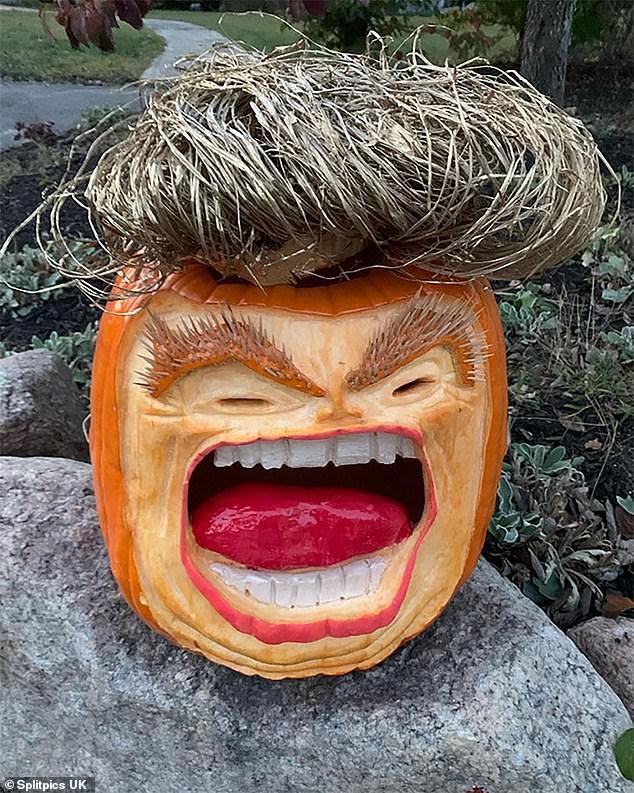 A Trumpkin has been given an extremely prominent, painted mouth as well as spiky eyebrows and a nest used for hair 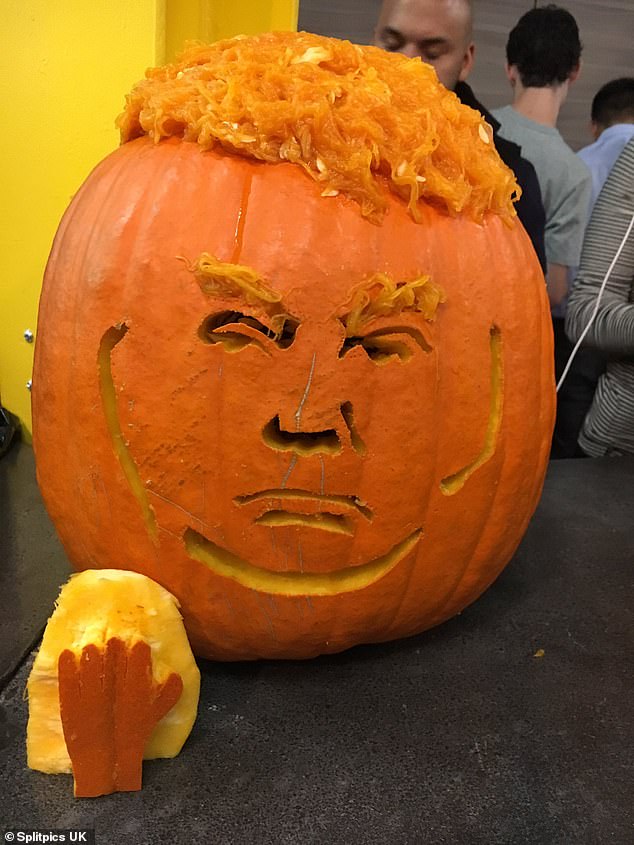 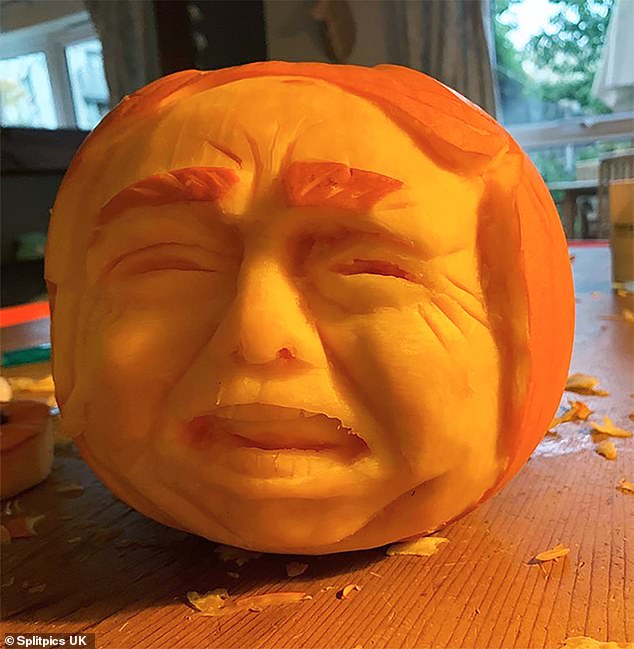 Others have used bits of straw in place of the President’s infamous hair, stuck cut out pictures in place of his eyes and mouth, or even been left outside to rot in one case.

One of Trumpkins posted online shows the President vomiting out pumpkin seeds and flesh in a grotesque display.

Another depicts Tump being injected with medication for Covid-19 while being surrounded by smaller pumpkins shaped to look like the coronavirus. 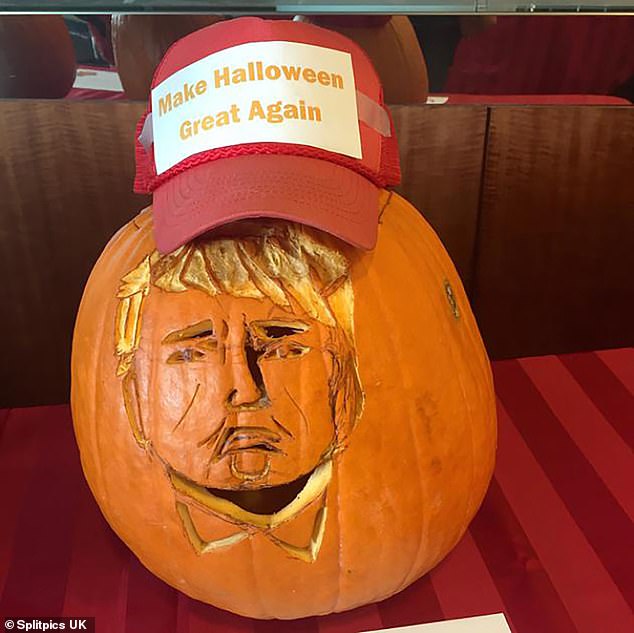 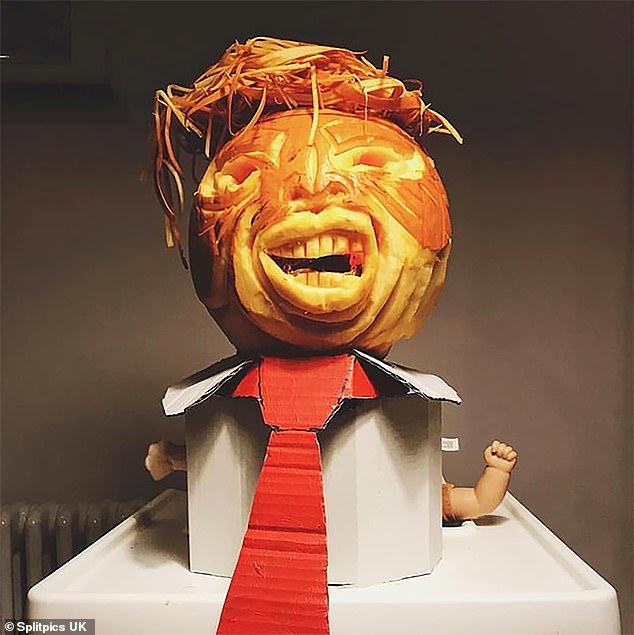 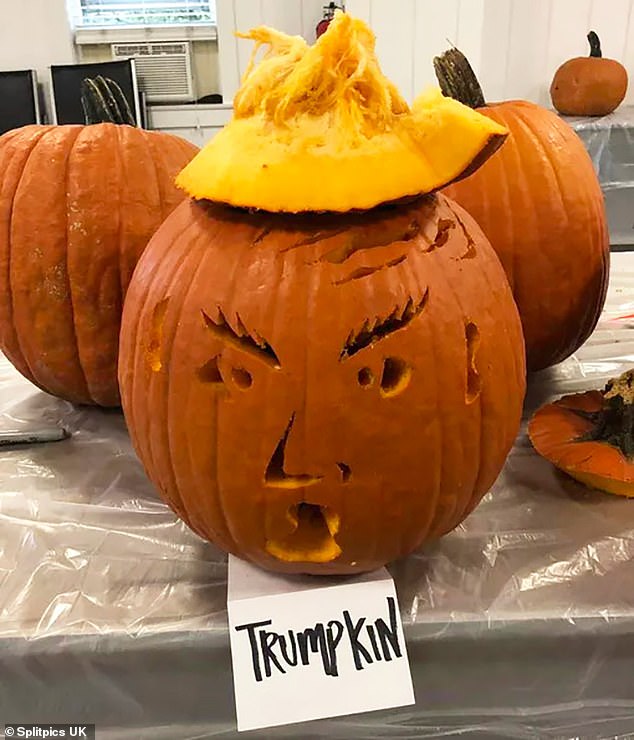 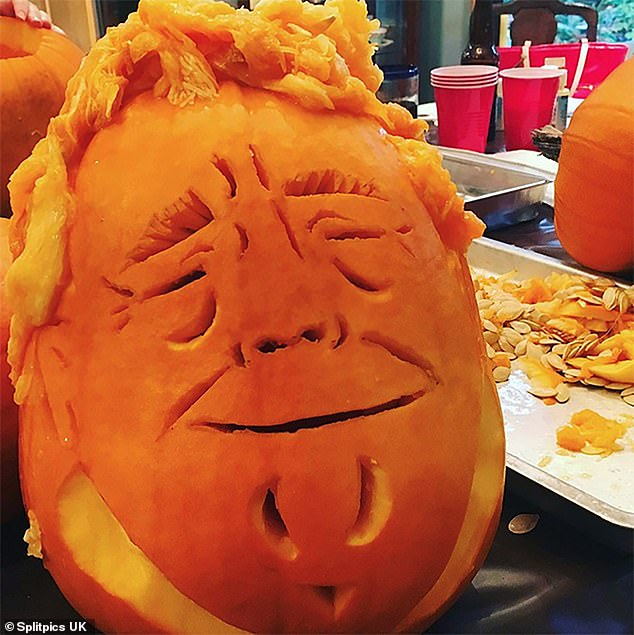 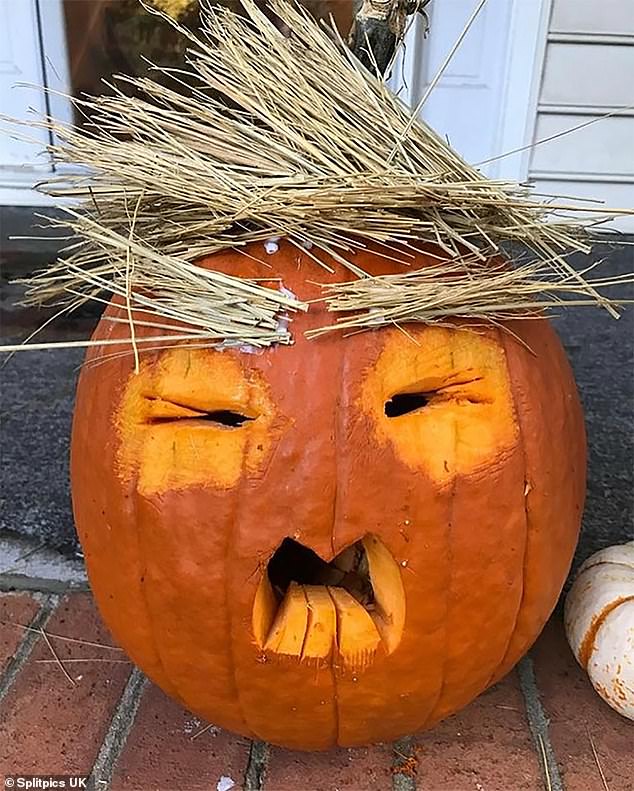 One Twitter user wrote ‘orange on the outside, hollow on the inside, and should be thrown out in November’ 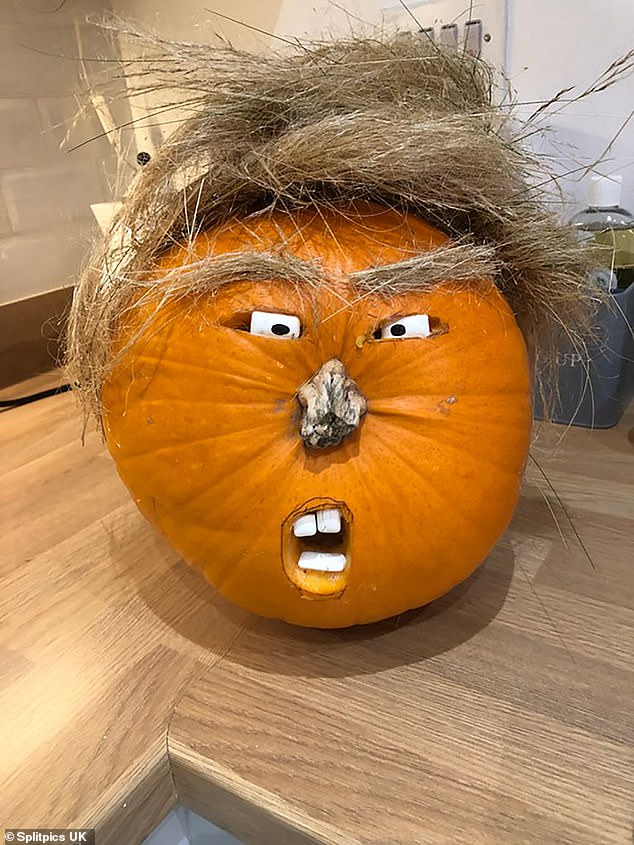 He wrote: ‘Definition: “Trumpkin”. It’s orange on the outside, hollow on the inside, and should be thrown out in November.’

Another user said: ‘I am absolutely carving a Donald Trumpkin this year. It’ll be the scariest thing in our display, and we already have a flayed dismembered head.’

Instagram creator GardenCoach wrote: ‘Trumpkin! My first try, wanted a better hairdo but hey so does he.’

Another wrote: ‘What do you call Halloween pumpkin that is as orange as Trump’s face and is promising to make Halloween great again? You call it a Trumpkin!’

Facebook
Twitter
Pinterest
WhatsApp
Previous articlePriest accused of injuring a baby when he repeatedly dunked it underwater during baptism in Cyprus
Next articleTrump paid more than $188,000 in taxes to China while paying next to nothing to the US treasury

To decide who’d receive their messages, the stars took turns pulling keys from a bucket to determine which celebrity would be rewarded.In rather...
Read more