Some fish that live in the deepest reaches of the ocean have evolved skin so dark it absorbs more than 99 per cent of all light, rendering the animal almost invisible.

The animals are so efficient at soaking up light that they appear as mere silhouettes, seemingly devoid of any features.

Academics from the US have identified at least 16 species that use the ultra-black form of camouflage to avoid predators, including the dragon fish and fangtooth. 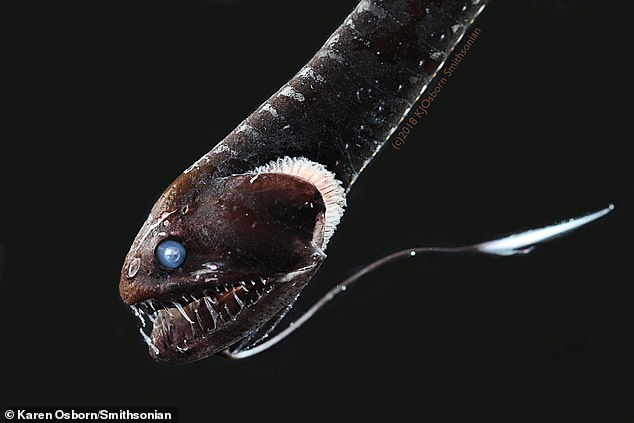 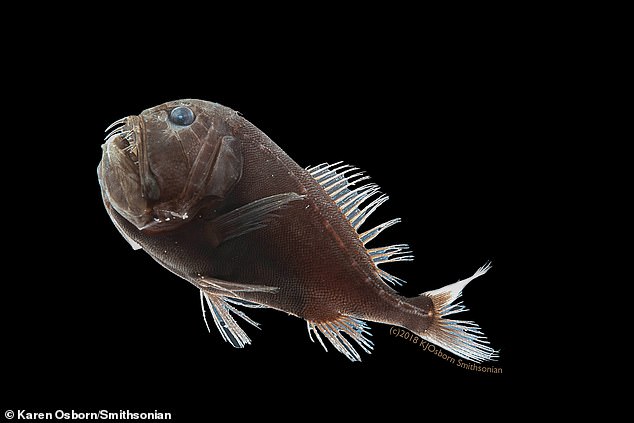 Pictured, a specimen of the ultra-black fish species Anoplogaster cornuta. This fish was so lively after being sampled and documented that the research team released it back to the deep via submarine the day after being caught in a trawl net

The darkness is created by melanin, a pigment which also gives human skin its colour. More melanin creates a darker skin tone.

In these fish species however, they have evolved to maximise production of melanin and have melanosomes, specific cellular pockets packed with the dark pigment.

They are arranged close to the surface of the skin and lie in such a way as to maximise light absorption.

Co-author Alexander Davis, a co-author of the study and doctoral student in biology at Duke University, says: ‘These pigment-containing structures are packed into the skin cells like a tiny gumball machine, where all of the gumballs are of just the right size and shape to trap light within the machine.’

Pictured, the ultra – black ridgehead (Poromitra crassiceps ).These fish are also commonly known as bigscales because of the few giant scales they possess. Their ultra-black skin covers their scales, but the skin and scales detach easily when a predator tries to grab them 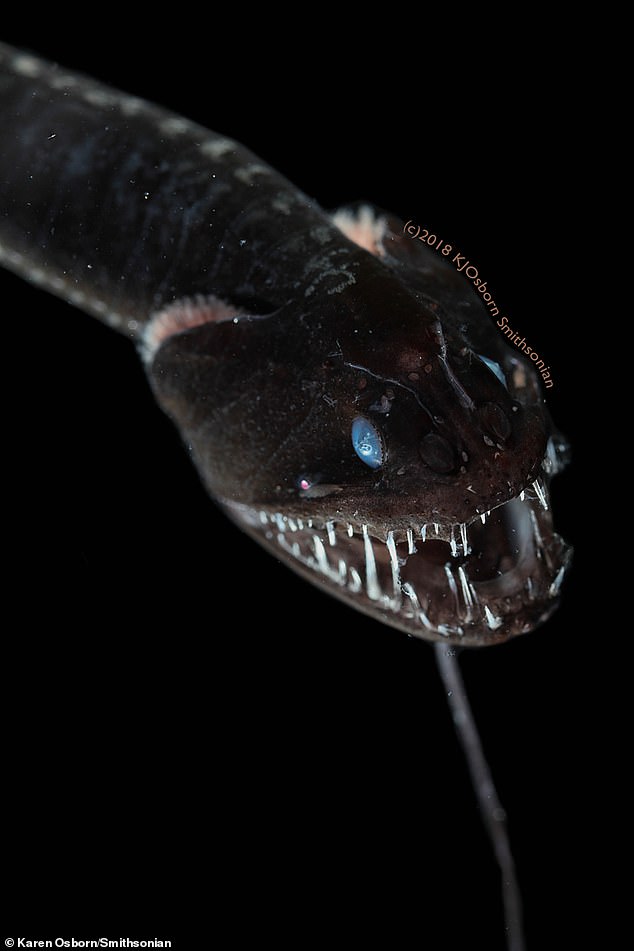 Pictured, the ultra-black Pacific blackdragon (Idiacanthus antrostomus), the second-blackest fish studied by the research team. These fish have a bioluminescent lure that they use to attract prey, and if not for their ultra-black skin and transparent, anti-reflective teeth, the reflection of their lure would scare prey away 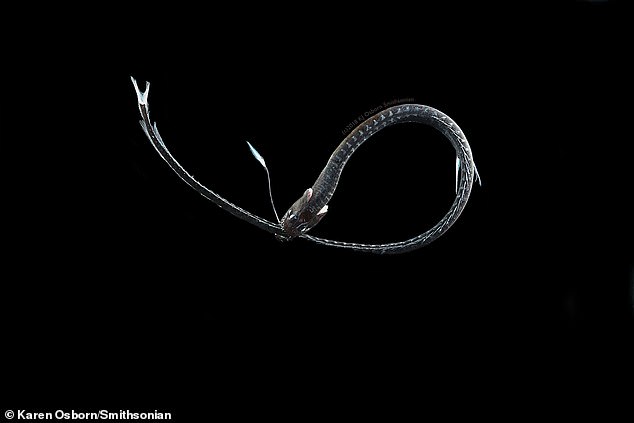 Scientists have finally proved what conventional wisdom has been telling us for decades — that being stressed causes hair to go grey.

However, in a stunning revelation, researchers from Columbia University also found the process can be reversed in hairs that have only recently greyed.

Reducing stress could stave off grey hair, scientists say, and it is hoped drugs could be developed to further prevent the unwanted process.

The study found hairs from all over the scalp can reverse greying. It also discovered that beard and pubic hairs can regain their colour after starting to go grey.

Scientists believe the root of the greying issue comes from changes to metabolic pathways which form proteins the body.

These pathways are heavily influenced by hormones produced when a person is stressed, and relieving stress can therefore undo the process.

‘Light doesn’t bounce back; light doesn’t go through. It just goes into this layer, and it’s gone.’

Soaking up light, whether from the sun or from bioluminescent creatures, is an effective technique to avoid being eaten in the bleak world of the deepest oceans.

The team caught and analysed 40 black fish swimming up to a mile below the surface in Monterey Bay and the Gulf of Mexico using a trawl net and unmanned marine vehicle.

They measured how much light was being reflected off each fish using a spectrometer.

This revealed 16 species reflected less than half a per cent of light, making them 20 times darker than everyday black objects like paper and tires.

Anglerfish, which are about the size of a ‘golf tee’, were found the darkest species, reflecting just 0.04 per cent of light.

Only one other animal in the world is known to be as dark, the birds-of-paradise of Papua New Guinea.

Dr Osborn said: ‘Mimicking this strategy could help engineers develop less expensive, flexible and more durable ultra-black materials for use in optical technology, such as telescopes and cameras, and for camouflage.’

The findings were published in the journal Current Biology. 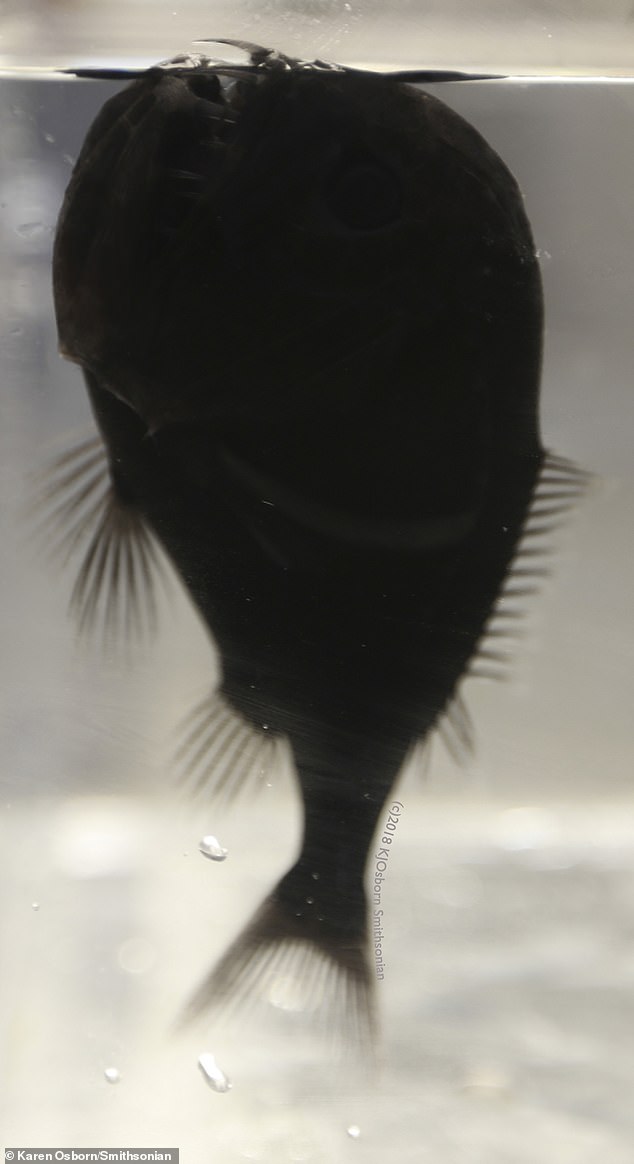 Pictured, the ultra-black fish species Anoplogaster cornuta being sampled before it was released back into the ocean