A spate of seagull attacks is being recorded as people return to quiet buildings and seaside towns invaded by the five-and-a-half-foot wingspan birds during lockdown.

One nursery in West Sussex even had to let children and teachers dash inside, despite social distancing measures, as the angry birds nosedived on the playground.

Pest management company Integrum Services says it has seen a 400 per cent spike in demand for technology to repel the birds, usually reserved for airports, from schools, universities and local councils dealing with the menace.

The company sells speakers that squawk gull alarm calls whenever the birds are close, sending them flapping for shelter.

The kit, which also comes with an inflatable human – dubbed ‘Scary Dave’ who pops up whenever the birds are close, can even be set up without breaking social distancing rules. There has been a spike in seagull attacks as people return to seaside towns invaded by the three-pound birds during lockdown. Many have nested on formerly quiet buildings 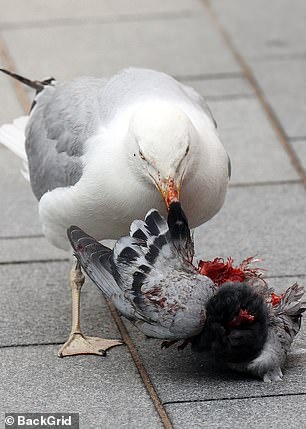 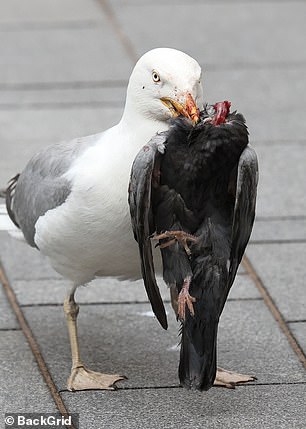 The gulls are also thought to be becoming more aggressive as many have gone hungry during lockdown, as shops remain closed. Experts said many have been seen killing pigeons, such as this bird in Leicester Square, London

Director of Integrum Services Peter Bowers-Davis, Integrum’s director, revealed they’re expecting heightened demand until after the national closure due to the ‘seagull invasion’.

‘The seagulls have loved the peace and quiet of lockdown and taken the opportunity to nest on empty buildings,’ he said.

‘There’s a nursery in West Sussex where the kids of key workers were attending and they were using the outside space a lot to try and keep to social distancing rules.

‘The birds were swooping down and attacking the children and the nursery staff so they were forced to hide inside from the seagulls but we’ve now installed the technology so they can play outside again.’

He added: ‘There’s less food available for them with people not visiting the beaches and we have seen quite a few killing pigeons and eating them.’ 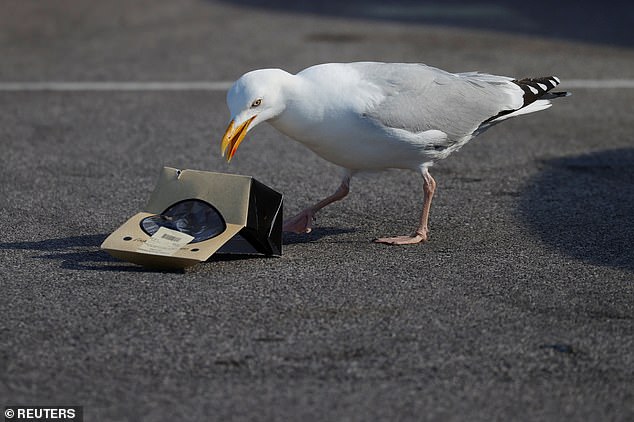 Pest management company Integrum Services said it has seen a 400 per cent spike in demand for its gull control devices following lockdown from schools, universities and councils 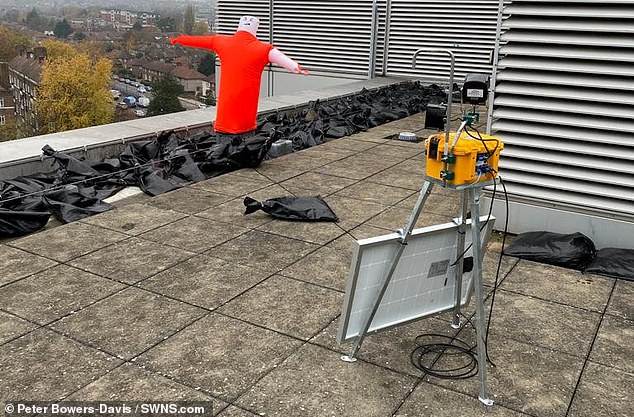 The device uses speakers, right, that emit gull alarm calls when the birds are close. They can also install an inflatable – dubbed ‘Scary Dave’ – which pops up whenever the birds are near

Local authorities were also left unable to deploy normal seagull removal services at the start of lockdown, due to social distancing, which has worsened the problem.

Seagulls are protected by law, meaning their nests and eggs can only be removed by licensed companies.

The mayor of Looe, Cornwall, who receives 40 to 50 complaints about seagulls a year, wrote to residents in April to apologise for the lack of action.

Integrum’s gull-deterrent technology works by listening to the birds’ calls, before identifying and recording their distress call.

Birds living in different areas have their own unique distress calls, which they squawk when they are being attacked to warn of danger, meaning the technology must pick up the right sound first.

If the birds become wise to the alarm, Integrum Services can also deploy a human shaped inflatable to scare off the invaders.

The company installed 18 anti-gull system in May, far higher than the average two to four which is normal for the time of year. 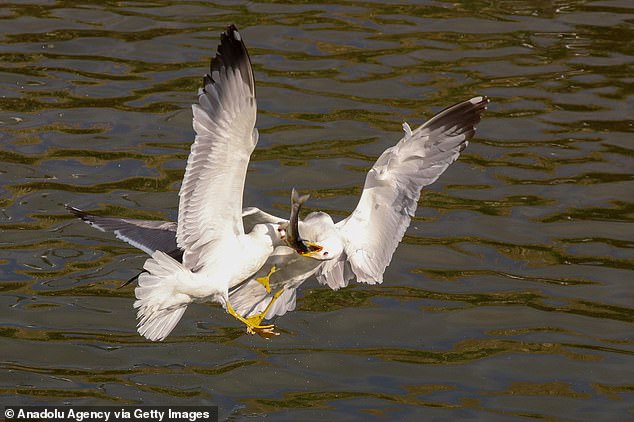 Seagulls have had to rely more heavily on other sources of food, such as the sea, during lockdown as humans have not been leaving out rubbish in the same quantities

Mr Bowers-Davis added: ‘When we’ve activated the system, it’s quite something, like an entire cloud of seagulls swarming above to get away from the noise.

‘It alerts every seagull within a 200 metre distance, and the seagulls imitate the call to spread the warning so the distress call reaches even further.

‘On Brighton seafront, there can be 200 to 300 seagulls flying off in a massive flock, it’s very impressive.’

There are around 140,000 pairs of herring gulls, the species commonly seen on seafronts, in the UK during the summer, and 740,000 individual birds in winter.

How does Integrum’s gull deterrent technology scare off the birds? 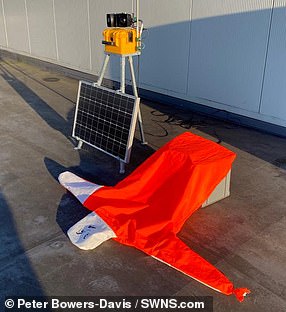 Speakers and inflatable used in system

The technology uses alarm calls to get rid of the seagulls, but can also be set up to use sudden movement.

Once installed on a roof, the system listens to gulls conversations as it attempts to pick up their distress call.

Seagulls make this noise when they are being attacked to warn others of danger.

It then records this and plays it when a seagull lands on the roof it is defending, sending the bird flapping away instantly.

If the gulls get wise to the speakers, an inflatable – dubbed ‘Scary Dave’ – can also be deployed.

This will pop up every time a seagull lands on the roof, scaring it off with sudden movement.