A large ice disc has been spotted spinning slowly and continuously on a river in northern China.

The piece of circular ice – formed by a natural phenomenon – had a diameter of about 20 feet, according to Chinese state media.

The spectacle appeared yesterday in Genhe, a city known as ‘China’s pole of cold’. 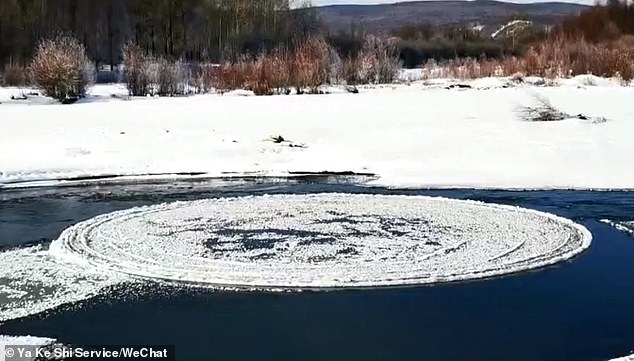 The piece of turning ice appeared yesterday in Genhe, a city known as ‘China’s pole of cold’

It was spotted on Wednesday morning near a neighbourhood in the western suburbs of Genhe in the Inner Mongolia Autonomous Region, reported Chinese state news agency Xinhua.

The temperatures there ranged between minus four and minus 26 degrees Celsius (24.8 and -14.8 degrees Fahrenheit) on the day.

HOW DO ICE DISCS OCCUR?

Ice disks, also known as ice circles, have been known to appear in the Arctic, Scandinavia and Canada.

They occur at bends in the river where the accelerating water creates a force called ‘rotational shear’, which breaks off a chunk of ice and twists it around.

As the disc rotates, it grinds against surrounding ice – smoothing into a perfect circle.

Residents in Genhe were treated with a similar sight last November. A smaller ice disc, measuring two metres (6.6 feet) wide, appeared to spin on its own in an anti-clockwise direction on Genhe River.

Situated near the border between China and Russia, Genhe is known for its harsh winter, which usually lasts eight months.

Ice discs come into being due to the fact that warm water is less dense than cold water, therefore when ice melts and sinks, the motion creates a vortex underneath the chunk, causing it to turn, according to National Geographic, citing a 2016 study.

The ‘whirlpool effect’ slowly erodes the plate of ice until its edges are smooth and its overall shape is perfectly round.

One of the most famous ice discs in recent times was sighted early last year in Presumpscot River in downtown Westbrook, Maine.

The spectacle was said to be about 300 feet in diameter and likely the largest spinning ice disc on record.

Powerhouse consulting firm McKinsey & Co. promoted a questionable strategy to increase the sales of OxyContin — giving distributors a rebate for every...
Read more

One of the most fascinating aspects to this season is how the Big Six are divided by the managers they have chosen.Jurgen Klopp,...
Read more

Daniel Dubois taken to HOSPITAL with serious eye injury after being...