Amazing images of the Butterfly and the Jewel Bug nebulae have been captured in unprecedented detail by the Hubble Space Telescope, according to NASA.

These colourful regions of interstellar space are created thanks to ‘stars gone haywire’, throwing off jets and bubbles of hot gas at the end of their life.

The new images show the two young planetary nebulae in the full spectrum of light – from ultraviolet to infrared, giving astronomers a rare glimpse at their makeup.

Astronomers were able to use the extremely detailed images to gain a deeper understanding of how nebulae form and why these two have ‘bizarre shapes’.

One theory proposed as part of the image release suggests that the shape is caused by a binary pair of stars in the nebulae – pushing the ejected matter about. 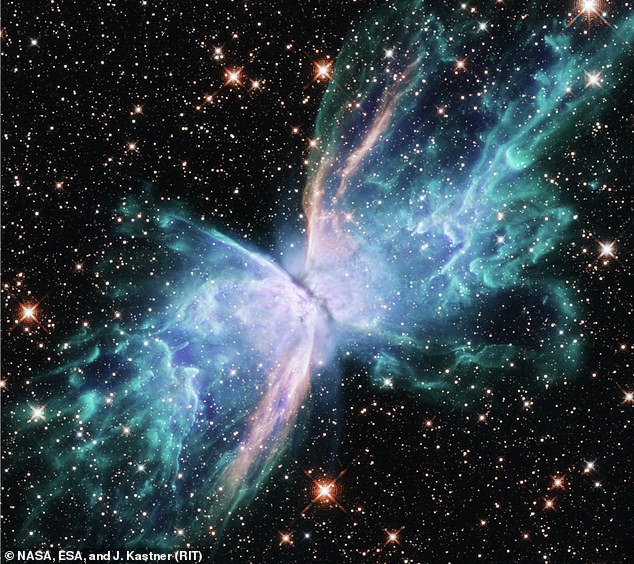 Most stars live placid lives for millions to billions of years but at the end of their life they turn into ‘crazy whirligigs’ puffing off jets of gas, according to astronomers.

The researchers found unprecedented levels of complexity and rapid changes in the jets and gas bubbles blasting off of the stars at the centre of each nebula.

By studying images captured in this level of detail, researchers are able to get closer to actually understanding the mechanisms underlying this chaos.

The Hubble Space Telescope has imaged these objects before, but not for many years and never before with the Wide Field Camera 3 instrument across its full wavelength range — making observations in near-ultraviolet to near-infrared light.

‘These new multi-wavelength Hubble observations provide the most comprehensive view to date of both of these spectacular nebulae,’ said Joel Kastner study lead.

This image from the Digitized Sky Survey shows the planetary nebula NGC 6302 and its surroundings. The researchers have found unprecedented levels of complexity and rapid changes in the jets and gas bubbles blasting off of the stars at the centre of each nebula

‘As I was downloading the resulting images, I felt like a kid in a candy store.’

‘The [Jewel Bug nebula] shows emission at an incredibly large number of different wavelengths, each of which highlights not only a specific chemical element in the nebula, but also the significant, ongoing changes in its structure,’ said Kastner.

Both nebulae are among the dustiest planetary nebulae known and both also contain unusually large masses of gas because they are so newly formed.

This makes them a very interesting pair to study in parallel, say researchers.

The new Hubble images reveal in vivid detail how both nebulae are splitting themselves apart on extremely short timescales.

This split is allowing astronomers to see changes the cloud of dust and gas over the past couple of decades, researchers say.

In particular, Hubble’s broad multi-wavelength views of each nebula are helping the researchers to trace the histories of shock waves in them.

Such shocks are typically generated when fresh, fast stellar winds slam into and sweep up more slowly expanding gas and dust ejected by the star in its recent past, generating bubble-like cavities with well-defined walls.

Researchers suspect that at the heart of each nebula were two stars orbiting around each other, based on the fact both nebulas have ‘bizarre shapes’.

Each has a pinched, dusty waist and polar lobes or outflows, as well as other, more complex symmetrical patterns.

A leading theory for the generation of such structures in planetary nebulae is that there is a star losing mass – creating the dust cloud – and it is part of a pair.

The two stars orbit one another closely enough that they eventually interact, producing a gas disc around one or both stars.

The disc then launches jets that inflate polar-directed lobes of outflowing gas.

Another, related, popular hypothesis is that the smaller star of the pair may merge with its bloated, more rapidly evolving stellar companion. 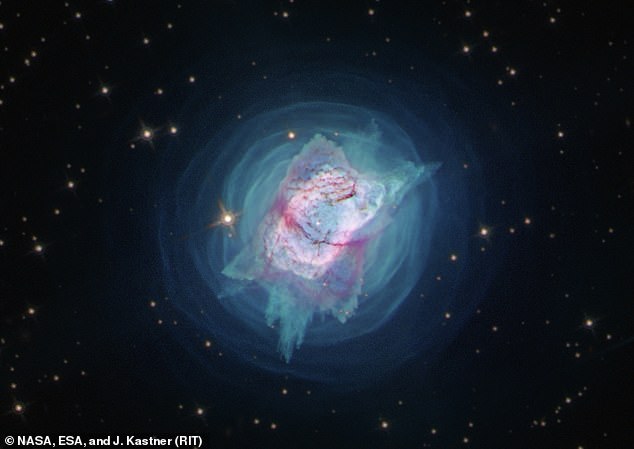 This is the Jewel Bug nebulae and like the butterfly nebula its cloud and shape is the result of a star losing its mass, ejecting material as it interacts with a partner star in a binary system

However, the suspect companion stars in these planetary nebulae have not been directly observed.

Researchers suggest this may be because these companions are next to, or have already been swallowed by, far larger and brighter red giant stars.

NGC 6302, commonly known as the butterfly nebula, exhibits a distinct S-shaped pattern seen in reddish-orange in the image.

Imagine a lawn sprinkler spinning wildly, throwing out two S-shaped streams. In this case it is not water in the air, but gas blown out at high speed by a star.

And the ‘S’ only appears when captured by the Hubble camera filter that records near-infrared emission from singly ionised iron atoms. 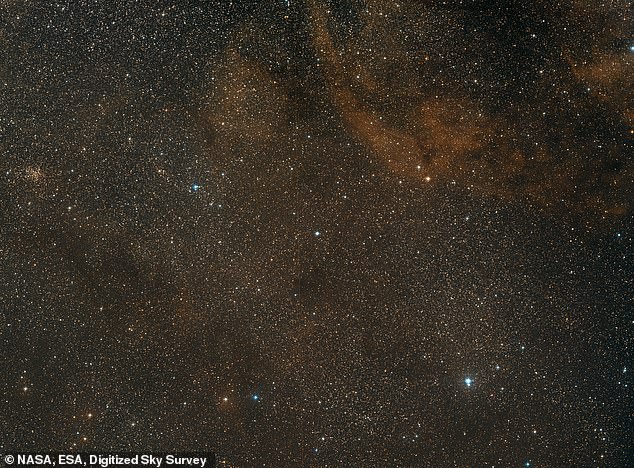 This image from the Digitized Sky Survey shows the planetary nebula NGC 7027 and its surroundings. By studying images captured in this level of detail, researchers are able to get closer to actually understanding of the mechanisms underlying this chaos

This iron emission is indicative of energetic collisions between both slow and fast winds, which is most commonly observed in active galactic nuclei and supernova remnants.

‘This is very rarely seen in planetary nebulae,’ explained team member Bruce Balick of the University of Washington in Seattle.

‘Importantly, the iron emission image shows that fast, off-axis winds penetrate far into the nebula like tsunamis, obliterating former clumps in their paths and leaving only long tails of debris.’

The accompanying image of NGC 7027, which resembles a jewel bug, indicates that it had been slowly puffing away its mass in quiet, spherically symmetric or perhaps spiral patterns for centuries – until relatively recently.

‘Something recently went haywire at the very centre, producing a new cloverleaf pattern, with bullets of material shooting out in specific directions,’ Kastner said.

A study of the images has been published in the journal Galaxies.

NASAs Hubble Space Telescope is still working and has made more than 1.3 million observations since its mission began in 1990

The Hubble telescope was launched on April 24, 1990, via the space shuttle Discovery from Kennedy Space Centre in Florida.

It is named after famed astronomer Edwin Hubble who was born in Missouri in 1889.

He is arguably most famous for discovering that the universe is expanding and the rate at which is does so – now coined the Hubble constant.

Hubble has made more than 1.3 million observations since its mission began in 1990 and helped publish more than 15,000 scientific papers.

Hubble has the pointing accuracy of .007 arc seconds, which is like being able to shine a laser beam focused on Franklin D. Roosevelt’s head on a dime roughly 200 miles (320km) away.

Hubble’s launch and deployment in April 1990 marked the most significant advance in astronomy since Galileo’s telescope.

Thanks to five servicing missions and more than 25 years of operation, our view of the universe and our place within it has never been the same.