Truly terrifying! Tennessee man decorates his home for Halloween with a giant ‘2020’ sign made out of wood – because ‘it was the scariest thing’ he could think of

A Tennessee homeowner is spooking his neighbors with his terrifying Halloween lawn art: a giant wood cutout of the number ‘2020.’

James Worsham, an artist and designer from Nashville, went the brutally-honest route with his Halloween lawn decor this year, erecting the giant ‘2020’ bookended by pumpkins and corn stalks.

Next to it, he put up a sign of explanation that read: ‘It was the scariest thing I could think of.’ 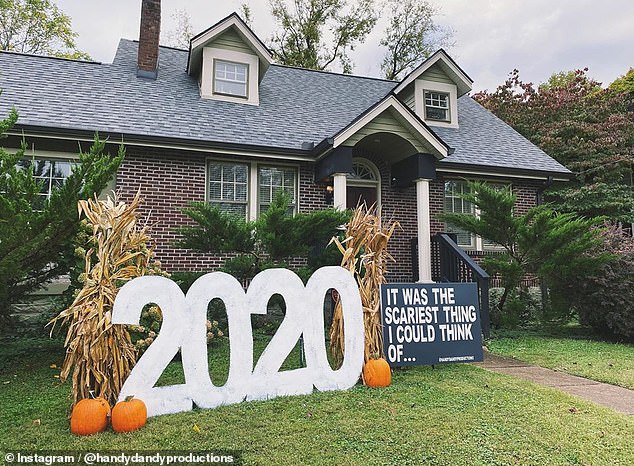 Spooky! James Worsham, an artist and designer from Nashville made a ‘2020’ for his front lawnand added some pumpkins and corn stalks for extra flair

Worsham, who owns Handy Dandy Productions, told Good Morning America that he doesn’t usually decorate his house for Halloween, but this idea — the perfect mix of creativity and cheesy humor — was too good to waste.

‘I had scrap wood laying around so I decided to put it to good use,’ he said. ‘And I’m kind of known for cheesy dad jokes so I figured why not put one literally on my lawn.’

While many people can claim to be having a bad 2020, Worsham’s year has been particularly rough.

‘I came home to basically the place that I worked, that I made all of my artwork, and that was really my sanctuary and my solace, [and it] was just, you know, pretty much a grotto. It was now full of water. My whole new body of work that I’d spent at least a thousand hours of work on, now it was just trash,’ he told CBC. 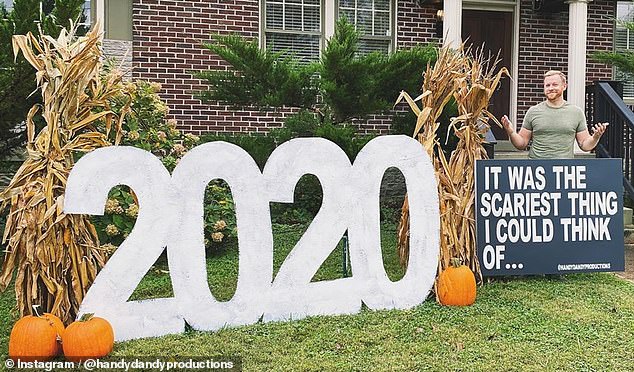 Truth: Next to it, he put up a sign of explanation that read: ‘It was the scariest thing I could think of’

‘And then as soon as I moved into a new location and I was so excited to get back into it, of course, the pandemic killed all of my project.’

‘I’ve been self-employed for about six years and having my baby kind of stall out overnight and have to pivot was really hard,’ he added. ‘And I’ve had lots of family health issues so it was just a hard year.’

Worsham said he has tried to look at the bright side of things this year, which has included him being able to create new types of art in his downtime.

He hopes his decorations bring some job to others.

‘I just hope that no matter what happens to people, that they’re able to laugh at things,’ he said.

‘It’s just what we’re all going through. You know, we’re just trying to make the best of a bad year,’ he added.