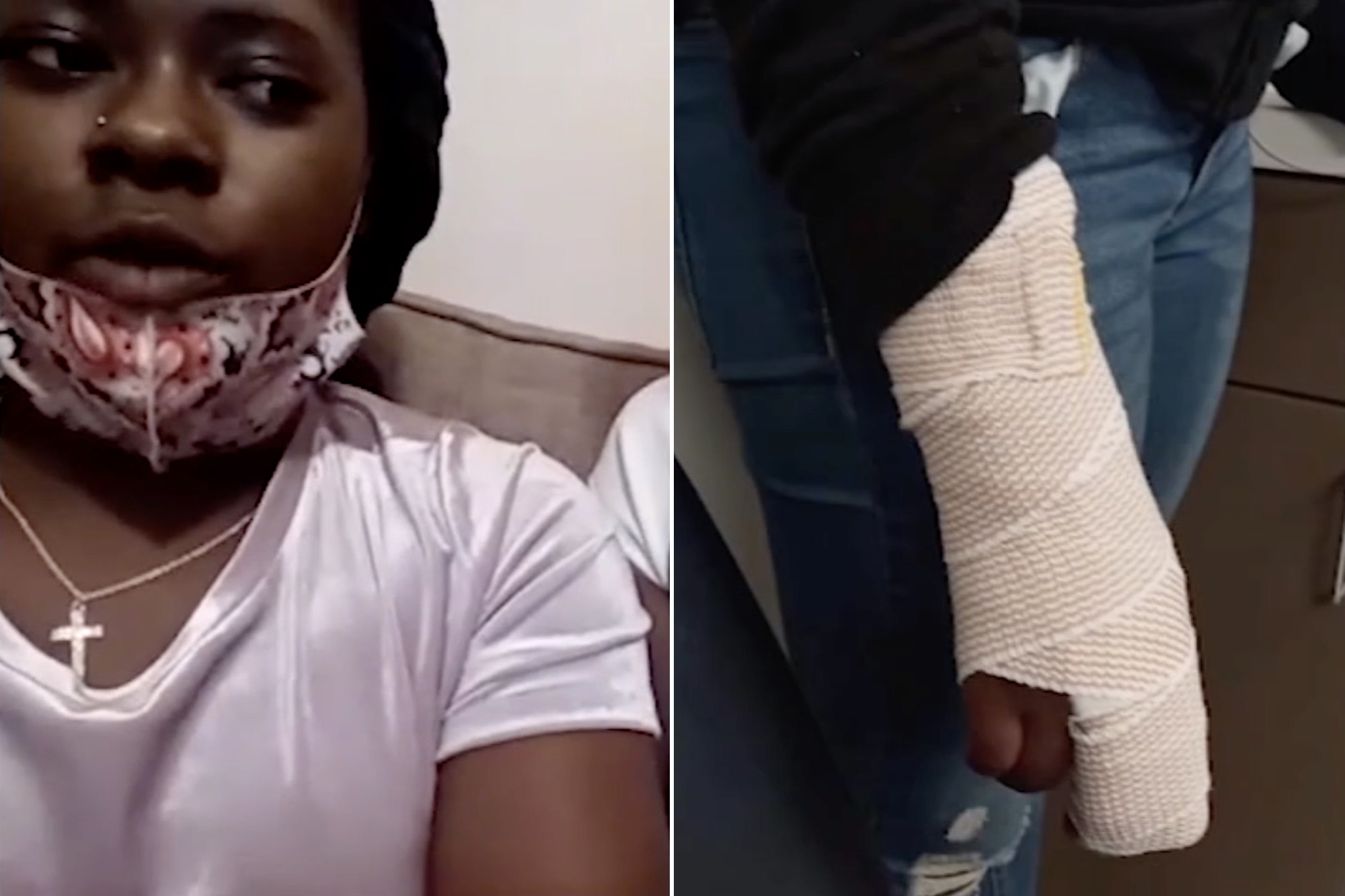 A Texas teen says police savagely beat her at school after she got in trouble for not correctly wearing a mask — causing her to suffer a broken hand and head injury.

Kaidence Lyons, a 15-year-old student at Clear Creek High School, said she was walking down the hallway Oct. 19 when a staffer scolded her for not properly wearing her mask, news station WTVD reported.

She said the employee called her names, accused her of talking back and told her, “I don’t want to hear nothing [sic]. I’m tired of y’all black kids thinking you can run my school.”

The teen said she was then sent to the principal’s office and taken into a separate room, where she was physically assaulted by three officers and placed in handcuffs.

“They didn’t tell me why I was being arrested, handcuffed and slammed down, hitting for different reasons,” she said.

Her mother Shanna Proctor-Lyons said she was horrified to learn her daughter suffered a broken hand in addition to head and kee injuries in the alleged beatdown.

“I just lost it,” she told WTVD. “I couldn’t understand why my 15-year-old was beaten so badly. They didn’t have any reason why.”

The family’s lawyer, Ronald Haley, Jr., questioned why the room had no cameras and asked that surveillance footage be released of the moments leading up to the incident.

“This was supposed to be a safe haven. It seemed very cavalier for her to be walked to that room casually,” Haley told the outlet.

Both the school district and the sheriff’s office have launched separate investigations into the incident.

“We are aware of the public allegations made by the student’s family and we take their concerns seriously,” the district said in a statement.

“The school district will continue to work with the student’s family and keep them informed along the way.”

The sheriff’s office didn’t immediately respond to a request for comment.

Mike Pompeo looked back on the highlights of his two-year stint as secretary of state, saying the release of three American detainees from...
Read more
News

Hanna Dickinson, a Melbourne resident and malignant narcissist who faked having cancer to defraud the Australian government, was slapped with another year...
Read more
News

Suspected North Korean hackers have reportedly tried to break into the systems of AstraZeneca, one of three western drugmakers claiming to have created...
Read more

Nicolas Tagliafico 'is to sign a new Ajax deal next week......
Read more

Kate Middleton is known for her stylish and classic outfits. Today was no different when the Duchess spoke on the ‘What the UK...
Read more

SoulCycle has come under fire again as more named employees have come forward to make allegations of racism and harassment against some of...
Read more

Allan Tannenbaum black and white images of the Stones, Ramones and Blondie in NYC in '70s and '80s

Nicolas Tagliafico 'is to sign a new Ajax deal next week…but...

SoulCycle is under fire AGAIN as more employees come forward to...